If Hamilton is serious about making cycling a viable, attractive choice for more people, we should be investing in protected cycle tracks everywhere we can.

With Hamilton Light Rail Transit (LRT) staff saying they may need to adjust the vehicle lanes on York Boulevard to accommodate westbound automobile traffic, we actually have an exciting opportunity to do something really exciting: extend the Cannon Street Cycle Track on York all the way to Dundurn. 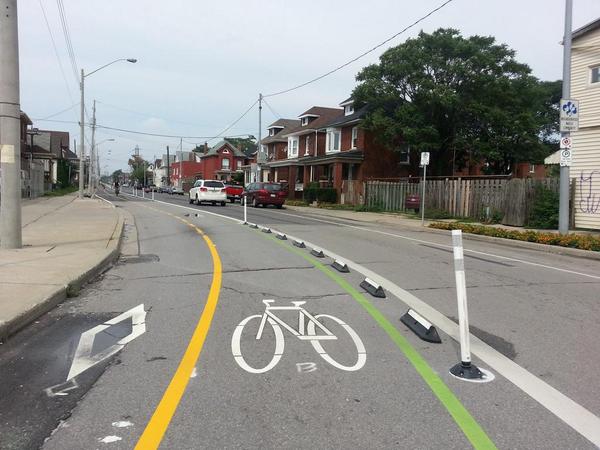 The Cannon Cycle Track is the most high-quality piece of cycling infrastructure in Hamilton - two-way traffic, physically protected, traffic signals, advanced stop lines (bike boxes) at cross-streets, pavement marking across intersections, and so on.

It was built in 2013 running between Sherman Avenue in the east and Hess Street in the west, and it established high expectations for what the connecting infrastructure to follow would look like. Unfortunately, those follow-up facilities have been a disappointing regression to the mean.

East of Sherman, there are no bike lanes at all between Sherman and Lottridge (but there is a surplus right-turn lane on the eastbound side), and there are just painted lanes between Lottridge and Britannia.

West of Hess, the York Boulevard bike lanes are painted and buffered with a physical space from the adjacent car lane, but they not physically protected and they disappear into right-turn lanes at intersections. 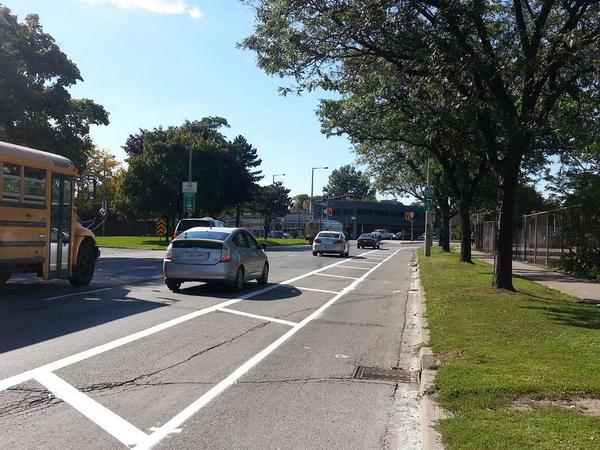 In addition, the connection from the Cannon Cycle Track westbound to the York bike lane is awkward, as it requires cyclists to make a two-step hop to a small bike box on Hess, and then make a left turn to the far side of York to pick up the bike lane.

At York and Dundurn, the connection to the Dundurn bike lanes is even worse: there is no obvious way for a cyclist to make the turn without joining the flow of mixed automobile traffic. 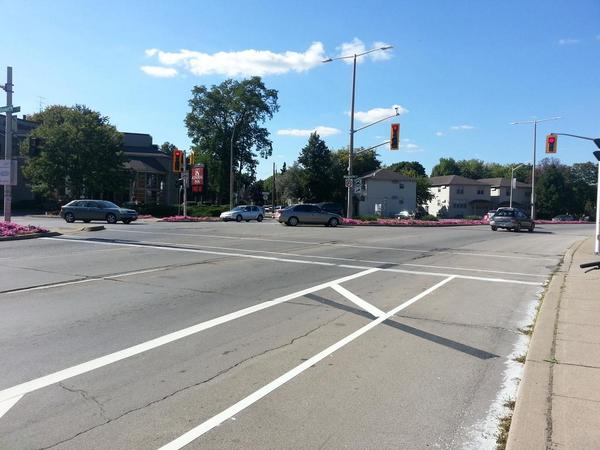 York at Dundurn: no obvious way to get to Dundurn bike lanes (RTH file photo)

York is a six lane boulevard with a grassy, tree-lined centre median. At present, one lane in each direction is dedicated to a buffered bike lane. LRT staff are saying they might need an extra westbound lane to accommodate automobile traffic displaced by LRT construction on King Street.

There is a whole argument to be made about whether it makes sense to increase the number of automobile lanes when we are trying to drive a shift in mode away from driving, but let's set that aside for now.

If we are still guaranteed to have the space of the southernmost eastbound buffered bike lane to work with, let's take the plunge and upgrade it into a two-way protected cycle track that links directly to its sibling on Cannon. 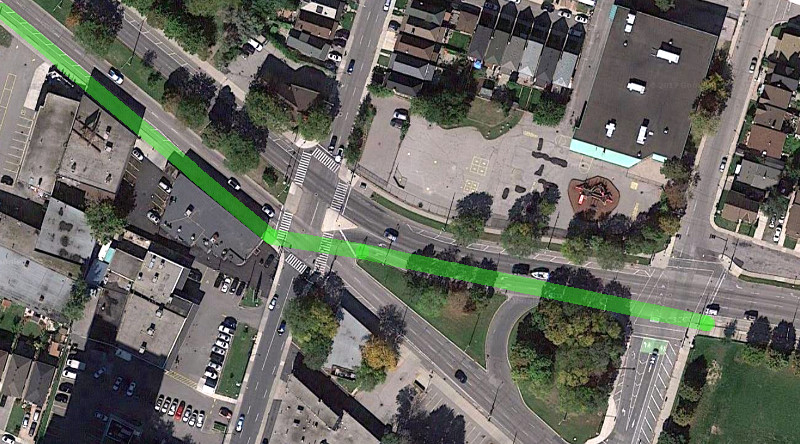 There will be some engineering challenges at Cannon and Queen, of course, where there is a high volume of automobiles turning left from Cannon onto Queen. However, this can be addressed by adjusting the traffic signals to add a stage for bikes transitioning between Cannon and York.

At Dundurn, the cycle track will already be on the south side, so the connection to the Dundurn bike lanes (or to an alternate route on Breadalbane) will be much easier. And along the way, it will also cross the proposed greenway on Magill-Pearl-Kent.

Physically protected cycle tracks are the gold standard of cycling infrastructure. They are the safest design for all road users, including people driving cars, and they are the most successful at attracting more people to use a bicycle for more trips.

Staff are also working on implementing a cycle track on Bay Street between Aberdeen and the Cannon Cycle Track, and the two-way bike lane on Hunter could easily be upgraded to a protected cycle track by installing bollards for protection from the adjacent vehicle lane.

With some vision and commitment to excellence, this could become the start of a contiguous network of protected cycle tracks that would really increase the number of people riding bikes safely and comfortably in Hamilton.

This traffic crisis for our current painted bike lanes on York is really an opportunity to do something much better, and we should seize it.

The south-running two-way approach worries me a bit since it means that turning movements have a lot of unexpected interactions with cyclists. Drivers turning have a very unexpected place to look for traffic.

If the city was willing to do some work on the concrete curbs of the turning-lanes/medians, I'd say a centre-aligned track would be the best approach. Most centre-aligned tracks suffer from not having a good refuge if the cyclist needs to stop, but in this case there's the massive parkette/median.

Locating the track on the North lanes of the Eastbound side would minimize confusing turning interactions - the only unexpected behaviour is that that left-turners would cross the track, and traffic signals can prevent that with a designated left-turn cycle. Specially controlled left-turns are already a thing.

This problem is quite complex. The cycle track on the south side of York as proposed above would make for some extremely hazardous interactions at Queen street and an extra signal phase is not likely to solve the problem. Signal timing is often calibrated to vehicular traffic and often the best timing for cyclists does not align with vehicles (Just look at the current intersection at Hess and Cannon - because of signal timing further back on Cannon westbound cyclist traffic rarely reaches the intersection with a green light to use the 2-stage turn as design - requiring jumping across 3 lanes of traffic or waiting for an extremely long light). In addition to phasing issues, this design approach is abnormal so for vehicles, pedestrians and cyclists predicting the behaviour of other modes would be challenging - especially for infrequent users.

Continuing the track on the North side of the eastbound lanes or south side of the westbound lanes is also hazardous. High volumes of car and truck traffic turning left at Queen would have to pass through the cycle track. Even as a confident cyclist that area makes me nervous. At the opposite end integrating traffic flow east/westbound on York beyond Dundurn would be a significant challenge as well.

Left turns at Queen are no worry because they have their own light cycle. That's why the centre aligned approach works - left turns are already controlled by designated left-turn lights, and right turns don't interact with the centre. Bikes go straight when everybody else does. The downside is more difficult access to/from cross streets for cyclists.

Left turns are an issue. The matter is about aliment. If the bike path is on the outside of the turn at queen cars and trucks have to pass through the path to their left turn lanes - not a safe solution given the volume of traffic. If they are on the inside you still have cars passing through the bike path to turn from york westbound to york eastbound, there is no means of protecting cyclists through the intersection if a car cuts a tighter turn and there would have to be a refuge for cyclists after completing the turn before proceeding westbound. This delay required would drastically reduce level of service.

As proposed, York using the Queen intersection to facilitate a transition to the south side is not a reasonable solution. There are considerable safety, navigation and access deficiencies that an alternate route using Hess and Napier could overcome.

I think a connection via Hess is more straightforward. The Cannon lanes can turn unimpeded into the huge unused hatched area on Hess. A bike box at Hess and York to facilitate the York-Hess turn, and nudge the York traffic lanes slightly north (taking away a bit of the median) to fit the contraflow lanes between Queen and Hess. With the priority left turn signals for traffic turning into Queen from York, there will be no complex interactions between cars and bikes, no more anyway than are already there with the existing bike lanes.

Today we find out that despite improved service, the HSR has seen declining ridership. It's a "mystery" as to why according to HSR officials.

However, I'm confident that Ryan will have a set off facts that will somehow offset the HSR's data. Ryan often brings up the "fly by" as a reason we have to build the LRT. I wrote in October how fly bys occur only during certain hours in certain months and are actually few and far between. Now we read that fly bys aren't occurring with any significant frequency and have actually decreased and ridership is still declining. The evidence seems to point toward the LRT being unnecessary by any metric. Can anyone clear this up for me with hard numbers? I guess you'll win eventually though because once you rip up the bike lanes I'll have no choice but to ride the train.