Easy Improvement for Cycling Connection from Cannon to York

A bike box on Cannon at Hess would be an easy, inexpensive change that would significantly improve the westbound connectivity for cyclists transitioning from Cannon to York.

I generally love the Cannon Cycle Track, Hamilton's first extended piece of continuous, physically protected, two-way cycling infrastructure. However, one aggravation I encounter whenever I'm using it to get to the west end is the awkward connection between the end of the cycle track at Hess and the start of the York Boulevard buffered bike lanes. 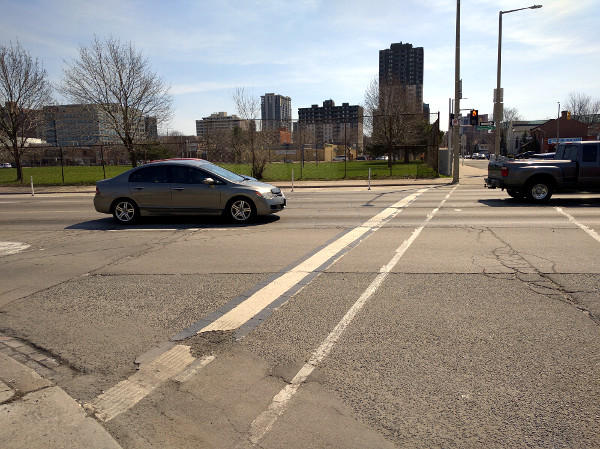 The City's current setup to do this is with a small satellite "bike box" on Hess. The idea is to make a two-stage transition: first, hop from the end of the Cannon cycle track to the box on Hess; then, wait for the traffic signal to change and make the left turn from Hess onto York.

This is slow and cumbersome, and I always feel exposed on the tiny Hess Street bike box island. Also, if there are more than one or two cyclists trying to make the same turn, the box gets crowded very quickly.

More often than not, I end up just merging with motor vehicle traffic before the intersection, lane-changing on Cannon to the far-right lane, and then picking up the bike lane on the other side of Hess. This is faster, but it means I have to leave the safety of dedicated cycling space and I know the vast majority of people are quite reasonably unwilling to do this.

The good news is that there is a very easy fix for this situation, and it's one that the City has already implemented at several other intersections: just put a bike box and an advanced stop line right on Cannon at the intersection.

You can see how it works at Cannon and Victoria. The bike box is the green painted area of asphalt on Cannon just east of the intersection. 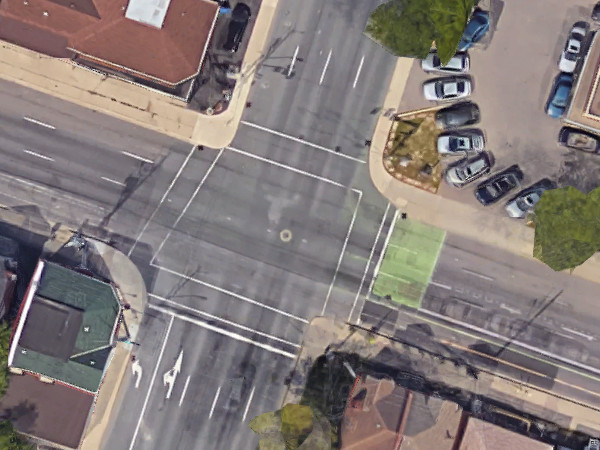 Victoria is a one-way street northbound, and the bike box provides safe space for cyclists on the cycle track to get in front of motor vehicle traffic, cross the other three lanes of Cannon and make the right turn.

The green box has a stop line - a wide, solid white line - in front of it, so vehicles need to stop. But cyclists on the lane can proceed around the stop line, turn right inside the bike box, cross the three lanes, and make the right turn onto Victoria. 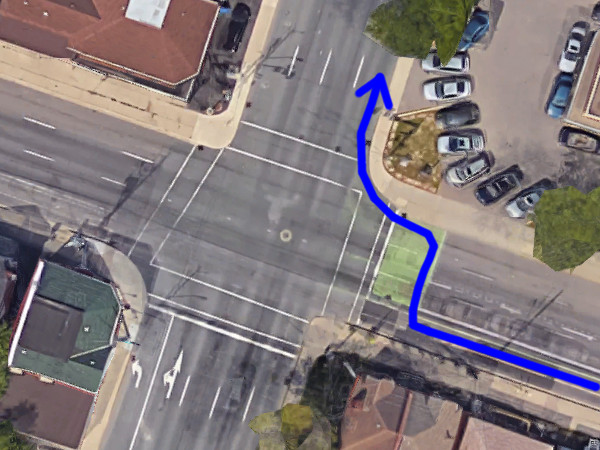 We can use the same technique at Cannon and Hess: it will allow cyclists to get across the lanes so they can either turn right or proceed west on York.

Here is a satellite view of the intersection at Cannon/York and Hess (note that the satellite image predates the Cycle Track and buffered bike lanes, so they are not displayed). 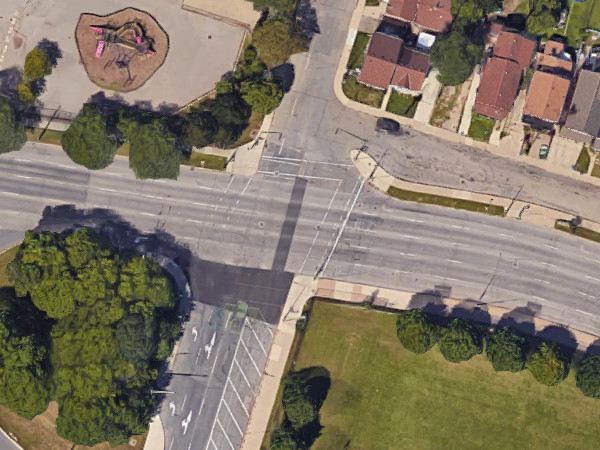 Here is the current two-stage method of proceeding west from Cannon to York using the small satellite bike box on Hess: 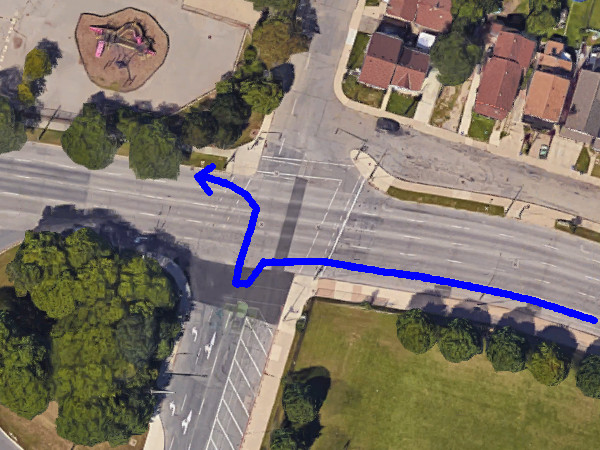 Instead, let's add an advanced stop line and bike box on Cannon: 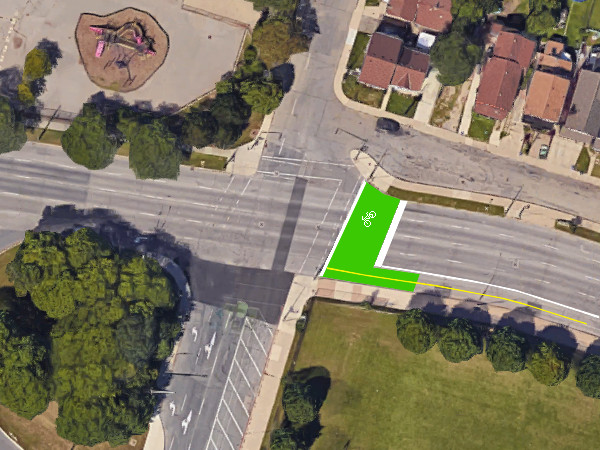 Here is how a cyclist can use the bike box to proceed west from Cannon to York more directly than the current route and more accessibly than the way I usually end up going: 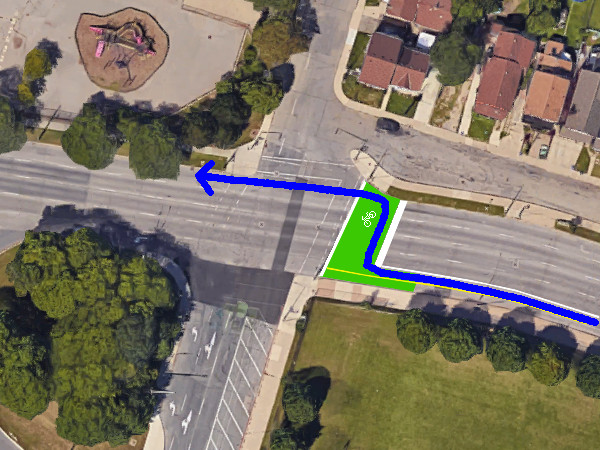 This arrangement would be both simpler and safer than the current setup at this intersection, and it would deploy a piece of cycling infrastructure that is already in use at several other intersections in Hamilton, including several intersections on both Cannon and Hunter Street.

In terms of the capital cost, the three-year Cannon Cycle Track pilot project was approved for an $867,000 budget and has come significantly under that budget as of last year's information report:

That's $390,200 under budget! Even counting the additional bike counter installation, pavement markings and intersection changes the City implemented last summer, which were budgeted at around $225,000, the project is still $165,200 under budget.

In addition, the winter maintenance costs have so far are expected to be significantly lower than projected. They will be published in another information report to come out in June or July of this year.

A bike box on Cannon at Hess would be an easy, inexpensive change that would significantly improve the westbound connectivity for cyclists transitioning from Cannon to York. I urge the City to consider implementing it.

Makes complete sense! Though you left out the most important description of the current satellite box setup: Confusing. My first stop there, I scratched my head, thinking "what am I supposed to do here?" I came to the same conclusion you have drawn, but I've watched other reasonably bright, educated friends get stuck wondering the same thing. Infrastructure should be as simple and intuitive as possible; fortunately there's an easy way to get there, as you have laid out!

A regular bike box there would certainly be useful for cyclists, but a bike box like you describe is a two stage crossing just like the current one is (article seems to suggest just the current one is a two stage crossing): with a bike box on Cannon at Hess, if you arrive at Hess and the light is green you have to stop, wait for the light to turn red, then proceed to through the bike box to the north side of Hess, then wait for a green light to proceed again.

Having both types of bike boxes would be ideal - that way arriving at the Hess at a red light, one can use the Cannon St bike box to get to north side and wait for green there. If one arrives at Cannon and light is green, one can proceed through the intersection to the Hess St bike box to wait for second green light there.

I do wonder though about the are safety considerations that aren't mentioned in this article. It is dangerous if cyclists proceed into a bike box when light is red but then turns green before they have gotten to other side as the cyclist is then directly in the path of cars. With all the trucks using Cannon, the side to side views for cars can be obstructed and they might not see that a cyclist misjudged the timing for the bike box manoeuvre and this could lead to collisions. Cannon is also more lanes than other bike boxes in Hamilton and it maybe too many lanes and high volume to meet existing safety standards for bike boxes.

For these safety risks, many cycling advocates don't think cities should be using bike boxes at all (very new in the Netherlands, and none in Montreal last time I checked). Instead, they prefer keeping cyclists safe by having a period in the intersection light cycle dedicated to cyclists (and pedestrians). Here's an interesting blog post arguing against bike boxes: https://aseasyasridingabike.wordpress.co...

I normally don't bother with typos, but this one totally changes the meaning of the sentence. The description of bike boxes should be "very few in The Netherlands."

Too late to edit my comment, but just for clarity: I meant to say in para 2: "If one arrives at Hess and light is green..."

An advance pedestrian signal that also allows bikes to cross diagonally would work even better.

Recently during one of the warm weather weekend days I was surprised at an unusual 'surge' of cyclists on 1-way King urban expressway. I counted 7 nearby bikes in motion on King spread over an approximately 1-minute period using King for at least 2+ blocks. This does not happen normally but it was quite odd to see. None of the bikes were related to each other (independent). I was riding a bike at the time and was 1 of the 7, since I needed to ride ~2 blocks from Sherman to Proctor.

I would have not seen these bikes if I was driving (which I usually am if I'm on King or Main) because half of the bikes snuck a two-block King trip in the deathly quiet part between platoon between the green waves. I loitered a bit to keep observing the unusual momentary visibility of bikes.

It really shows there needs to be more north-south protected connectors as well, it's not always easy to reach points on Barton from points south of Main, and my spouse Alain often visit community events on either his owned bike (cheaper) or on a SoBi bike. We need more east-west options south of King too, such as a continuously connected Delaware-Stinson-Hunter cycleway all the way to Gage Park, SoBi GPS heatmaps show more use of this route than the Cumberland "signed" bike route.

A SoBi bikeshare station got installed only 1 block away recently, using one of the wintertime-relocated racks. Incidentally, Alain often finds it faster to use than the owned bike because instead of taking a bike out of storage/lockup. One only need to punch a 6-digit membership code to instantly unlock a SoBi and great for 1-way bike trips. SoBi is often cheaper than bus for a short trip that's slightly too far to walk (80 cents to ride bike 10 minutes to downtown, since the $4/hr pay-per-use is prorated)

In my opinion, a simultaneous green would be the best solution for this intersection.

I believe that is what Sean was referring to in his comment.

Raise the ryan wiped out a comment couple days ago in support of matthew green, councillor--and poleece socety said cop didn't get out of the poleece car so what cop did was ok, but to say good for matthew on raise the ryan is NOT ok i guess