If the City and Metrolinx insist on removing bike lanes from York and Dundurn, let's make sure we end up with a network that is better than the one we're losing.

The City is considering removing the bike lanes on York Boulevard between Queen and Dundurn, and on Dundurn between York and King, a frustrating state of affairs that risks undermining the success of the Provincial investment in Light Rail Transit (LRT) by trying to preserve the status quo.

There is one encouraging note: Metrolinx and the City have said they are committed to maintaining or replacing the existing cycling infrastructure around the LRT line.

Following is a proposal for how we might end up with a cycling network through this area that is better than what we have today.

With the right leadership and healthy community engagement, this could be an exciting opportunity to rethink the City's approach to providing cycling infrastructure through this entire area.

Much as I will be angry and disappointed if the decision is made to remove the bike lanes on Dundurn Street North, which were hard-won by the previous councillor after a lot of resistance, at least it opens a window to do something better than painted lines on a busy street.

For years, RTH has advocated adopting neighbourhood greenways - residential streets that allow local automobile traffic but are designed to prioritize walking and cycling over driving.

Neighbourhood greenways are through streets for people on foot or on bikes, while discouraging speeding and cut-through driving through the use of roadway design elements like bumpouts, neckdowns, chicanes and diverters.

Designed properly in a network, neighbourhood greenways can serve as a highway system for cycling, connecting people both within and across neighbourhoods in a design that expands cycling as a viable option beyond the 1-2 percent of people who are willing to ride in mixed traffic or on painted lanes.

In the past, RTH has advocated an east-west greenway on Head, Hunt and Napier, intersected by a north-south greenway on Magill, Pearl and Kent. These would directly connect Strathcona with the adjoining Westdale, Central and Kirkendall neighbourhoods.

Expanding on this idea, and taking into account the pressure to remove the existing painted bike lanes on York and Dundurn, here is a proposed map of possible cycling enhancements through the entire west Hamilton "area of concern" for traffic: 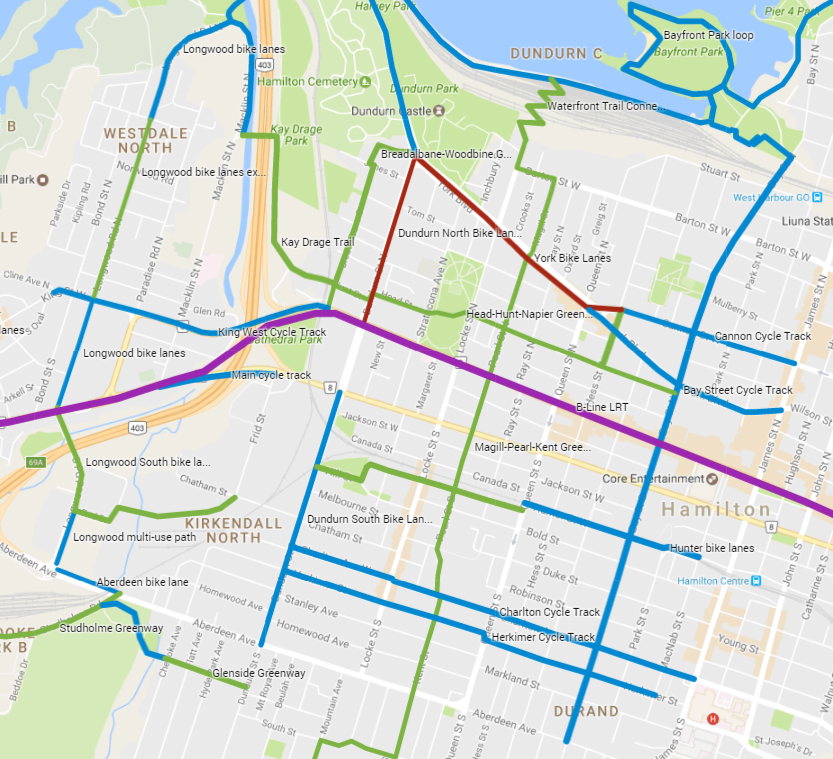 The purple line is the B-Line LRT, of course. The red lines are the threatened York and Dundurn north bike lanes. The blue lines are existing or planned bike lanes and multi-use paths. And the green lines are the locations of proposed greenways.

If we're going to lose the bike lanes on Dundurn North, one way to replace them is to turn Breadalbane into a new greenway between York Boulevard and the King Street West Cycle Track across Highway 403. 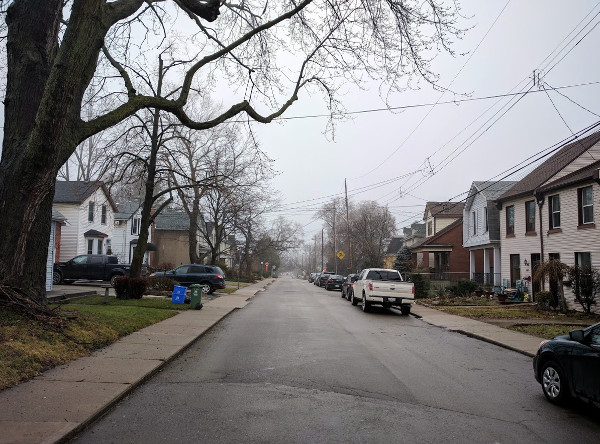 At its northern end, it could connect to the bike lanes on York - at the very least, to the bike lanes continuing north toward Burlington - via Woodbine Crescent, which runs behind the Admiral Inn at the corner of York and Dundurn.

One issue with Breadalbane is that it has three stop signs: at Tom, Lochearne, and Head Streets. Bicycles are not the same as automobiles, and frequent stop signs are very frustrating for cyclists, because physics. The evidence clearly indicates that streets are actually safer when cyclists are allowed to treat stop signs as yields.

It would be fantastic if the Province was willing to grant municipalities the ability to designate some stop signs as yields for cyclists on greenways.

Near its southern end, the Breadalbane greenway could intersect the Head, Hunt, Napier greenway. This east-west greenway would connect at its east end with the planned Bay Street Cycle Track.

At the west end, past Breadalbane, it could extend through the field behind Christ the King Cathedral and across the CP tracks to Kay Drage Park and the Waterfront Trail on Macklin.

This north-south greenway would connect Strathcona and Kirkendall neighbourhoods, providing a safe through corridor for walking and cycling on a route that is already not a through street for driving.

Cars cannot cross York Boulevard between Magill and Pearl, but people walking and biking can. Similarly, the route passes across the Pearl Street Bridge, which does not allow driving, and on a multi-use path across HAAA Park.

At its north end, this greenway will eventually connect to the planned pedestrian bridge to the Waterfront Trail. At its southern end, it connects to the Radial Trail to Ancaster and the Rail Trail into Dundas.

It's a common complaint that there is no easy, obvious way to cycle into Strathcona from the northeast. Meanwhile, Hess Street is three lanes wide and nearly empty at all hours of the day. There is so much surplus asphalt that a whole lane is just hashed off and sits empty. 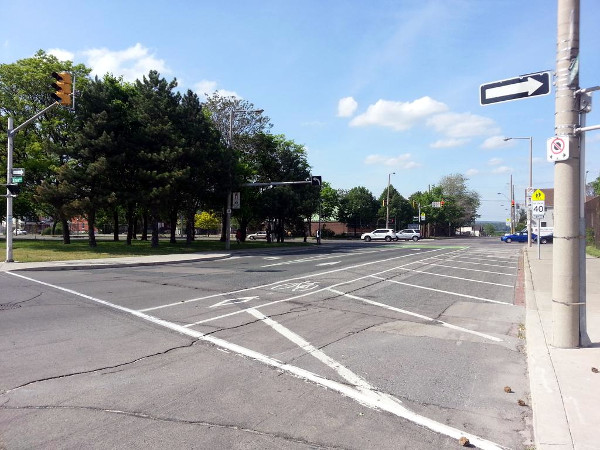 It is a no-brainer to add a two-way cycling facility on Hess between the Cannon Cycle Track and the greenway on Napier. This would also cross the bike lanes on York between Hess and James.

Farther south, we can turn Hunter Street west of Queen into a two-way neighbourhood greenway. This will cross the Pearl greenway and connect to the Dundurn South bike lanes via Hill Street west of Locke.

Right now, Hunter is one-way westbound west of Queen, but is a very low-volume residential street that would be much better served as a two-way greenway. 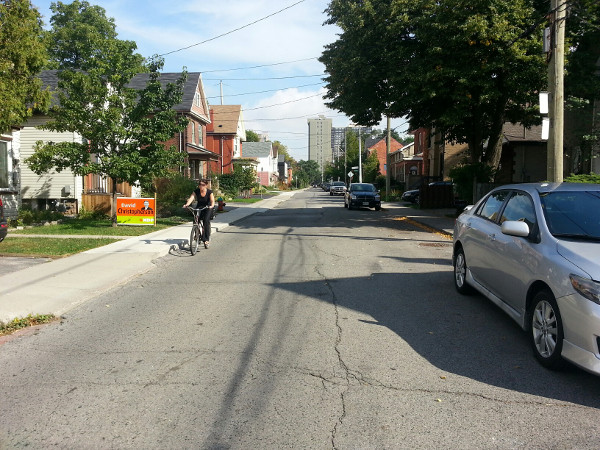 Hunter only carries around 1,600 cars a day between Queen and Locke, so there is no reason why it can't serve more people more inclusively as a two-way greenway.

At its east end, the trail starts at the western dead-end of Glenside Avenue, an east-west residential side street between Chedoke Avenue and Dundurn south of Aberdeen. With some minor design tweaks, this could serve as an inviting gateway to the Rail Trail and its many destinations.

Right now, there are bike lanes on Longwood North between the Waterfront Trail at Macklin and Franklin Avenue. The bike lanes pick up again at King Street and continue to Main Street.

The cycling network will need a connection on Longwood between Franklin and King. This infrastructure will also intersect the King West bike lanes, which cross Highway 403 in a physically protected cycle track and extend into downtown Westdale.

Another gap in cycling infrastructure on Longwood is between Main and Frid Street. There is a multi-use path between Aberdeen and Frid but nothing north of that. 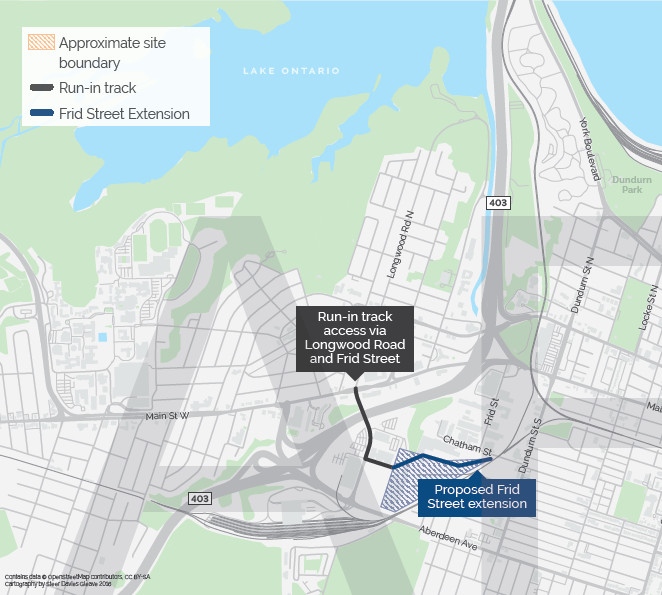 The LRT design is expected to include a spur line on Longwood from Main south to a new station on Frid Street. This should include bike lanes that connect both to the multi-use path on Longwood south of Frid, and along Frid Street to connect with the bike lanes on Dundurn South.

A subsequent article considers some possibilities to improve cycling in West Hamilton.

For Breadalbane, rather than hope upon hope for Provincial dictates allowing cyclists to yield at stop signs (not a hill worth dying on IMO), treat it through a traffic calming lens (which by the by helps increase the comfort of the roadway for cyclists and is a key ingredient in successful greenways elsewhere). Simply remove the stop signs in favour of physical speed reduction devices like speed humps midblock, and small neighbourhood-scale traffic circles at the intersections in question. Designed properly, cyclists can navigate these without slowing down appreciably, and cars are forced to operate at the intended speed for the road.