We're entering the final days of the PlanLocal Ward 2 Safe Streets Voting phase! Councillor Jason Farr has dedicated $1 million to improving street safety in Ward 2 and has asked the public for their input on how to spend it. This is an opportunity for the local community to have a direct say in prioritizing the projects that will make their community safer. 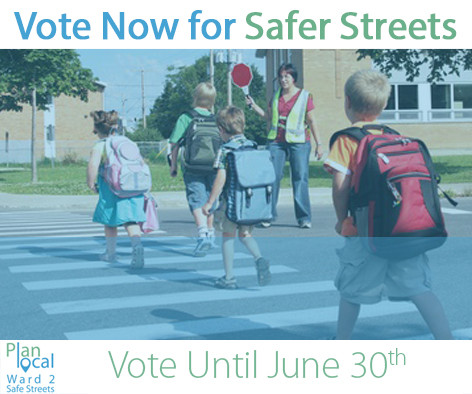 Any Ward 2 resident - including children - or business owner can now vote for their top ten safe streets projects.

Voting is convenient and easy and takes about 5 minutes. To vote:

Hundreds of Ward 2 residents and business owners submitted their safe street ideas during the PlanLocal Identification phase. These ideas resulted in the creation of a voting list of 24 projects, with four project locations in each of the six Ward 2 neighbourhoods.

If you have any questions about the types of interventions proposed in the voting list, please visit our safe streets solutions page.

Click on our interactive map to learn more about each project. Each Ward 2 neighbourhood has at least four projects, with several helping to connect neighbourhoods together.

If you have voted, then you can encourage your friends, your kids, your neighbours, and your colleagues to get out and vote. The more popular a project is, the more likely it will be built, so we encourage you to organize your community around the projects that are most important to you!

Thanks for your questions, Jason. Wellington is the boundary of the Ward north of Main. It only juts out to Wentworth south of Main to include the Stinson neighbourhood.

The projects on the final voting list are the four most popular projects from each neighbourhood that were not already planned or that did not have other conflicts. Mary had a couple of popular locations but the streets to the east didn't have the same popular support.

You can find out more about the voting list development here: http://planlocal.ca/ward2/voting-list-de...

great to hear. Thx for the reply! re: Kevin Love below, thx to you as well for the reply. Too bad nobody on Wellington submitted painted buffered bike lanes like those on York Blvd.

Regardless, this list looks fantastic. I expect many of these could be done for $1 million.

I note that at Ferguson and Main the cheap, crappy asphalt substitute for a proper curb cut has half broken away. This is inspiring me to take a photograph and send it in.

The projects are entirely driven by citizen submissions. If there is "nothing proposed N of Main between Mary and Wentworth" that is because nobody proposed it.