On Thursday, December 3 just after 5:00 PM, a 74-year-old man was struck by a sedan in the intersection of Barton Street East and Catharine Street North. The man was taken by ambulance to hospital with life-threatening injuries. 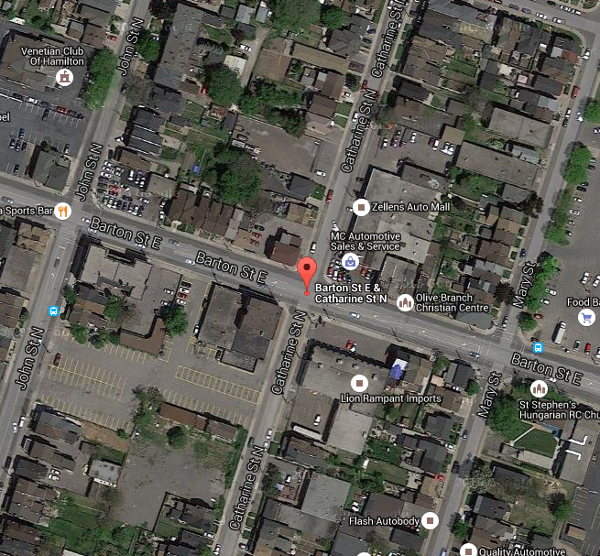 The driver, a 47-year-old woman, was charged under Section 144(7) of the Highway Traffic Act with failing to yield to a pedestrian.

This follows the hit-and-run fatality on Wednesday, December 2 of a 53-year-old man who was killed riding his bicycle up the Claremont Access.

It also follows the death of a 62-year-old man who was struck by a driver on Sunday, November 29 while walking on the sidewalk at York Boulevard and Hess Street.

As I write this, Hamilton Police are at the corner of James Street and Main Street, investigating yet another incident of a pedestrian being struck by someone driving a vehicle. A 14-year-old boy was taken to hospital with minor injuries.

It has been a grim, tragic couple of weeks in Hamilton, a city whose streets are notoriously convenient for fast driving - our former mayor bragged that we were "the 20-minute city" - but comparatively inhospitable to people not in cars.

The City is great at platitudes - like the "Putting People First" Plan, which Council approved in 2001 but has yet to implement in more than a piecemeal fashion; or the International Charter for Walking, which Council formally endorsed in 2008; or the Pedestrian Mobility Plan, which Council adopted in 2013 - but not so good at making real changes in how we plan our communities, design our streets or fund our road projects.

Notwithstanding Friday's vote to expedite a protected cycle track on the Claremont Access, Council likes to boil the ocean over tiny investments in walking and cycling while approving millions and tens of millions of dollars in road work without a whisper of debate.

In 2009, Council approved the Shifting Gears Cycling Master Plan, which calls for $2.5 million a year in cycling investments to build out the cycling network over 20 years. At no year since then have we come anywhere close to spending that kind of money. In 2013, we didn't build any cycling infrastructure at all! 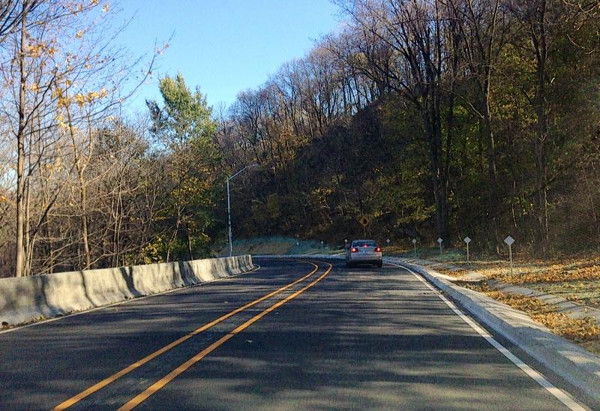 When Beckett Drive was completely reconstructed in 2013, it was rebuilt with wide lanes, a wide double-yellow line and no walking or cycling amenities whatsoever. Should we be surprised that the City is having to deal with dangerous speeding on that access?

On December 4, a drunk driver roared through a Hamilton Police speed trap on the Jolley Cut at 89 km/h and nearly ran over a police officer. This incident happened just before 9:00 AM on a Friday - how is it even possible to drive that fast on a major access during morning rush hour?

This morning, the Public Works Committee is learning that dangerous speeding is a huge problem on the Red Hill Valley Parkway and Lincoln M. Alexander Parkway. The 85th percentile speed is 115 km/h and 500 vehicles a day exceed 140 km/h - yet some Councillors still want to widen the highways from four lanes to six.

I am sick and tired of posting story after story about vulnerable people being struck, injured and killed while simply trying to walk or cycle on our dangerous-by-design streets.

When will the Councillors who love being able to race through the city at high speed finally come to understand that carnage is not a competitive advantage?

You also forgot to mention Mr Whiteheads motion going before council this week asking staff to build all new roads with MORE car capacity than the current standard. Yes, you read that right. In one of the most dangerous cities in the province where its absolutely very easy to do 90 on most Mountain Accesses during our laughable 'rush hour', a councillor wants us to build our roads WIDER than we already do, to encourage even more speeding, death and destruction.

If we adopt Vision Zero in Hamilton is will absolutely require us to do the opposite: start building roads with more transit-only, bike and pedestrian capacity and LESS car capacity. Undoing the damage of the last 50 years means we need to prioritize the long-ignored modes of transport for a few decades, not add more car capacity.

I'm happy to hear Whitehead moving on the Claremont thing. I like to be optimistic, so I'm going to hope that this will represent improvement in co-operation between the Mountain councilor and cycling advocates, since traditionally he's been one of the louder voices critical of cycling improvements.

Small steps. It's a shame that it took a death before taking action.

We know that some Councillors need to "tap out" after the most minor of changes are made.

The rest need only receive a handful of telephone calls from angry, upset, whiny, entitled car drivers to totally roll over.

Unfortunately few of them have any concern for the legacy they will leave following their time in "public service". Sadly it's all about the paycheque they receive from their career in municipal politics.

The people on our city council are not qualified to make any decisions regarding our transportation network. They should only be allowed to approve an annual budget. From there on they should not be allowed to interfere with the planning or decision making.

Suburban city council is qualified to win a popularity contest

... which we would not be saying if Hart "Traffic Wants to Flow" Solomon were still in charge :)

These deaths are truly tragic. May I suggest that we educate our children in school about the realities of road safety because they apparently are not taking it too seriously. Drivers are; I would say 50% more distracted just in the last year. I live around Locke St., and there is not a day that I do not meet a car coming at me in my car the wrong way. Pedestrians and cyclists are not much better. Jay walkers, jay cyclists. Pedestrians crossing never looking around, plugged in, and looking at their phones. Cyclists coming at me the wrong way. No lights or bright clothing.With winter coming I shudder at the thought.Literally!You can put in as many lanes as you like , however until people are instructed on road safety I predict there will not be a big change.

A good start to removing the confusion you describe would be to eliminate EVERY one way street in Durand and Kirkendall.

There is no compelling reason to keep any of them.

Count me in to attend a rally or sit-in, etc. or any civil disobedience measures.

My experience as a driver and watching other driving, as well as being a cyclist, is that I noticed it is SUPER EASY to get comfortable behind a wheel while driving in Hamilton, due to the sheer car-optimizing of Hamilton. I now take a coffee before driving onto the roads.

European downtown roads, in contrast, easily wakes you up as you need to be conscious. To some, that's stressful, and to others, it's just a Lazy Sunday Drive in traffic not being the least stressed trailing behind a car (often a North American make-it-on-time rush hour stress mentality).

Having choices other than driving (pleasant transit, pleasant walking, biking amenities, etc), makes it far less stressful when I do indeed to choose to drive behind cars in traffic. But Hamilton isn't currently designed that way; any slowdowns to status quo feels more stressful here than elsewhere. I wonder why -- and I think it's because one gets easily used to the ease of driving in Hamilton, and that's kinda an unsustainable thing in the big picture. My car was purchased as a weekend driver, to cottage, but it has become an unwanted commute vehicle when we permanently moved to Hamilton nearly two years ago. Slowly I am now able to leave it behind at home (instead of spending a third of its life parked at Aldershot GO) with the now-increasingly-convenient SoBi+GO commute.

Both the LRT and all-day GO will start up nearly the same time, and I might not need to buy a car again (instead doing a Presto-style tap-and-go in a carshare similar to Car2Go which is like SoBi for cars!) and instead renting something lovely like a camper or hatchback for the occasional long drive. With just a tiny fraction of Hamilton (10%) going that mentality, much more parts of the city can re-urbanize, lower tax burden, and increase tax base. It may take a couple of decades, but already read a statistic that less than 50% of kids are getting driver licenses nowadays.