On Beckett Drive, even the rush hour traffic is not congested by any reasonable definition of congestion.

Vehicle traffic on the Queen Street Hill/Beckett Drive escarpment access is so slow that the City had to paint a marking at Queen Street South and Glenfern to warn drivers about how slow it is. 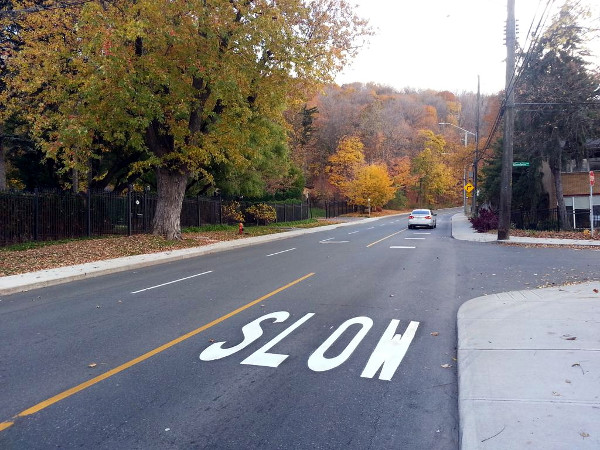 Just kidding! The "SLOW" pavement marking is used to try and slow motorists down in locations where speeding has been identified as a problem.

The City currently has its mobile speed radar set up for downbound traffic right at the the bottom of Beckett Drive, just before it turns into Queen Street at Amelia. 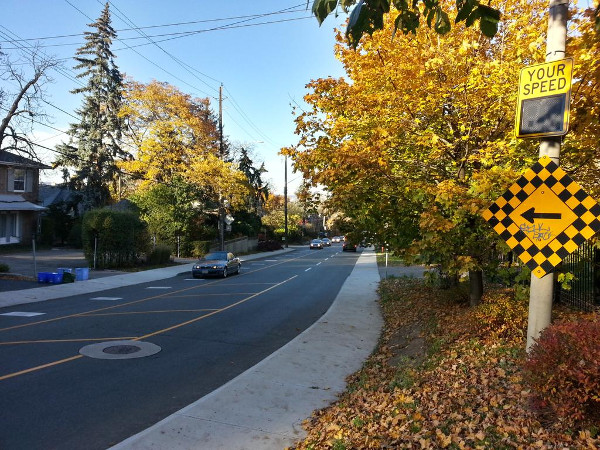 Speed Radar set up at bottom of Beckett Drive

It's right at the bend before Amelia, where Beckett veers north to become Queen Street South. The speed limit here is reduced to 30 km/h due to the sharp curve. 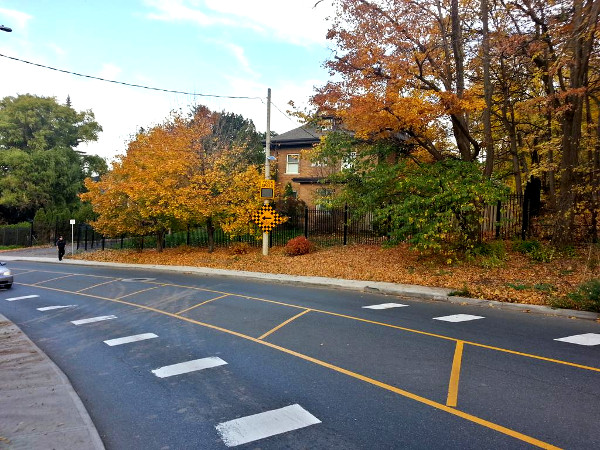 Speed Radar on bend at bottom of Beckett Drive

I was a bit concerned that the City installed the speed radar right at the spot where drivers are slowing down to go around the curve, rather than farther up the access or north past the bend where you can really speed up.

But I needn't have worried: a velocitized driver is a dangerous driver, and in just a few minutes yesterday afternoon I was able to observe several drivers going around the bend at dangerously high speeds. 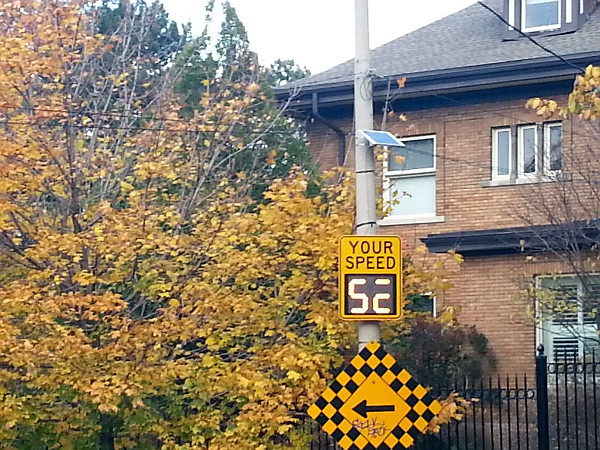 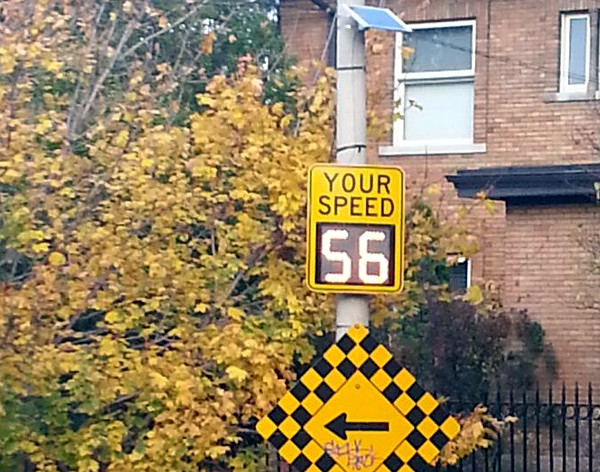 Of course, a few people will object that I took these photos at 3:45 PM instead of the middle of rush hour. My immediate response is that a street that has dangerously high vehicle speeds for 22 hours a day is not a good street.

But in the case of Beckett Drive, even the rush hour traffic is not congested by any reasonable definition of congestion. Here's the Google Maps Typical Traffic for Beckett Drive on a Monday morning at 8:30 AM: 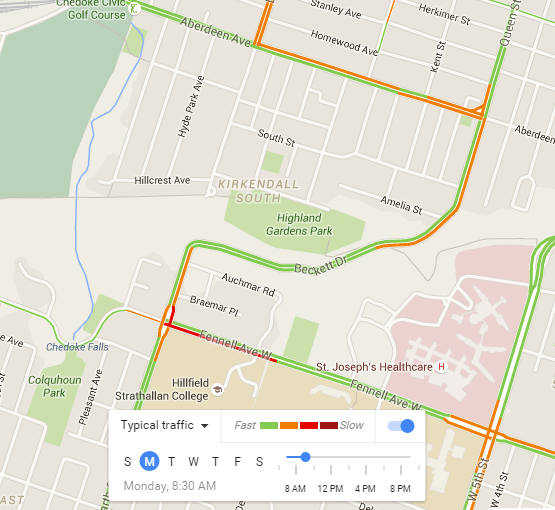 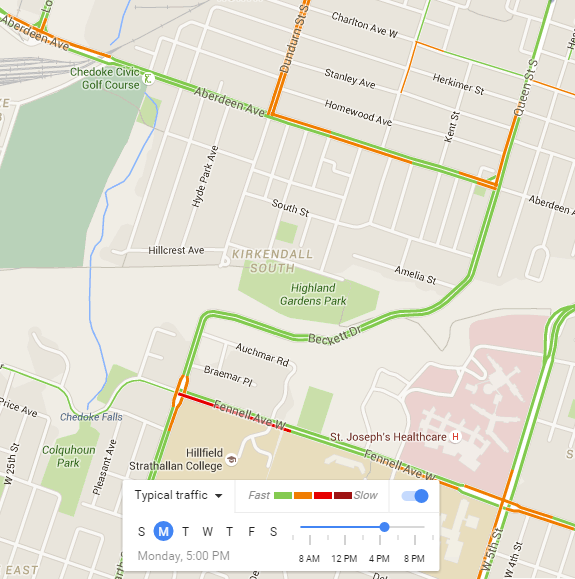 The extent to which this city is willing to deform its streets and traumatize its urban neighbourhoods to achieve the goal of free-flowing vehicle traffic even during rush hour is doing tremendous harm to the city's safety, inclusiveness and even economic development.

Last night, the City's Planning and Economic Development department hosted a talk with Gord Hume, a celebrated municipal author and former city councillor who specializes in municipal affairs. I wasn't able to attend the event, but the Hamilton Spectator's Joel OpHardt has a report:

Hume said he felt disengaged through much of the downtown, where multi-lane, one-way streets are geared to moving cars through the area quickly. He stressed solutions such as expanding sidewalks, narrowing streets and changing zoning for shops and restaurants so they can spill onto sidewalks.

Citing his extensive interviews with city planners around the world, Hume focused on what he calls the most livable city — Melbourne, Australia, where they plant 3,000 new trees a year, and have increased foot traffic to the point where more than half of the journeys to the city's core are by pedestrians.

"You have a choice: do you build a city for cars or a city for people?"

Hume is, of course, only the latest in a depressingly long list of experts who have all come to Hamilton and told us exactly the same thing: tame and reclaim those dangerous urban expressways!

Will City Council ever start to listen?

Many of the most successful social, religious, and political revolutions of the past put their messages to music in order to spread their ideas and stir up enthusiasm ... think "Give Peace a Chance", "The Internationale", "A Mighty Fortress is our God", and even "Yankee Doodle".

I'm going to sit down with my guitar tonight and see what I can do with "Having to stop at a red light is not congestion. Having to slow down a little bit in the peak of rush hour is not congestion. It is not reasonable to expect to enjoy free-flowing traffic above the speed limit 24 hours a day."

Way back, almost 15 years ago, City planning staff produced the first formal plan for the Downtown Core. Ironically enough, it was entitled "Putting People First" (as opposed to car traffic).

Even the City's own staff "got it" ages ago.

But much of Council seems impervious to expert advice (especially from their own staff), examples from many other cities around the world, and even actual evidence from Hamilton itself. Too often they resort to anecdote and their own feelings about what they think residents want (rather then looking to the results from surveys and public meetings).

Maybe they should look at the example of the new Liberal government who clearly stated they would make evidence-based decision using good data, rather than on ideology!

Progressive change to really Put People First (as opposed to car traffic) gets bogged down in endless studies, objections about even very minor cost, and is the subject of hours long Council debates (e.g. Cannon Street Bike lane). Even then, the change is criticized and Council gives themselves easy ways to kill the project.

On the other hand, spending tens or hundreds of millions on road construction passes, usually without comment, and always without any study of the costs of alternatives.

That has been bad for Hamilton and Hamiltonians. However, now that Hamilton is beginning to attract billions in investment (including a $1 billion investment in LRT from the Province) it becomes vital that Council educates themselves about what makes a CITY successful and attractive! And it is not the ability to roar through the core on a green wave unencumbered by crossing pedestrians or distracting, interesting businesses!

(Note that when Beckett Drive was re-built it didn't require a massive citizens campaign, anguished debate at Council and it did not involve any attempt to make it inclusive street, even to the extent of adding a sidewalk or a crosswalk at the Bruce Trail crossing point. In fact the hashed out painted centre median is space that could have been used to make a sidewalk or bike lane. Instead it makes it easier to speed ... narrower lanes slow traffic!)

However, possibly combined with a slightly wider road allowance, it could have been enough to make a bike lane or a sidewalk on one side.

The point is that sidewalks or bike lanes were not even considered. But they did widen the road enough to add this "buffer" region for vehicles, which likely has the effect of increasing speeds.

This seems to be construction the timeline they followed (Butternuts trumped PICs):

I live at the top of Claremont and occasionally use the Beckett access. I must say I was disappointed when that reconstruction was done as it basically turned out exactly the same way it was. It really was a once in a 20 year chance to improve that access, either with a pedestrian path or bike path, or maybe even fixing the way the road banks in the wrong direction...just saying. Another missed opportunity. Lived here my whole life and the city definitely wears on you when you look at potential, futility and incompetence.

I saw people trying to cycle up the stupid concrete ditch yesterday the city put along the Beckett Dr access. When you look at how much they widened the road-bed, it easily could have housed a 2-way multi use path on the north side. Instead they put in oversized lanes, and now are cluttering the bottom of the hill with all sorts of warnings trying to get people to drive slower. Wider lanes = speeding. Always. They also really slapped everyone in the face by literally just wasting loadspace by painting off a yellow dead zone in the middle of the street. And then the concrete ditch on the south curb, again not needed for a road that runs through a forest. Angle the roadway into the forest for run-off instead of trying to capture forest runoff.

Worst part is, they had plenty of input from residents asking for at least and up-bound bike lane, and for narrower traffic lanes. Best place to ignore citizen input......