This Monday, staff will begin installing two-way bike lanes on Hunter Street between Liberty and Catharine, and between MacNab and Queen.

The City's Public Works Department is set to begin installing the planned two-way bicycle lane on Hunter Street. The street will remain one-way westbound for motorists. 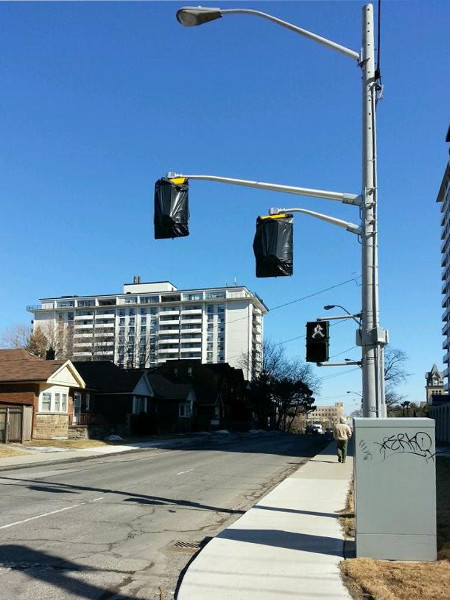 The work was supposed to be completed in 2013, but staff responsible for the bike lanes were redeployed to implement the transit-only lane on King Street. The bike lane work will begin on Monday, June 2 if the weather allows for road paint.

Curbside parking on Hunter will move from the south side to the north side of the street between Liberty and Catharine. West of MacNab, there will be no change.

Discontinuity Between Catharine and MacNab

Unfortunately, the section of Hunter Street between Catharine and MacNab, which runs past the Hunter Street GO Station, will not have bike lanes installed at this time.

City staff have explained that the section between Catharine and MacNab will not be installed yet because they have not yet determined how to run the bike lanes through that stretch.

Earlier this year, an urban planning student prepared renderings for how the bike lanes could run past the GO Station. It allows for a bi-directional bike lane protected from the automobile lane, and it preserves curbside in-and-out parking while improving safety and clarity for pedestrians, cyclists and motorists at the corner of Hunter and Hughson. 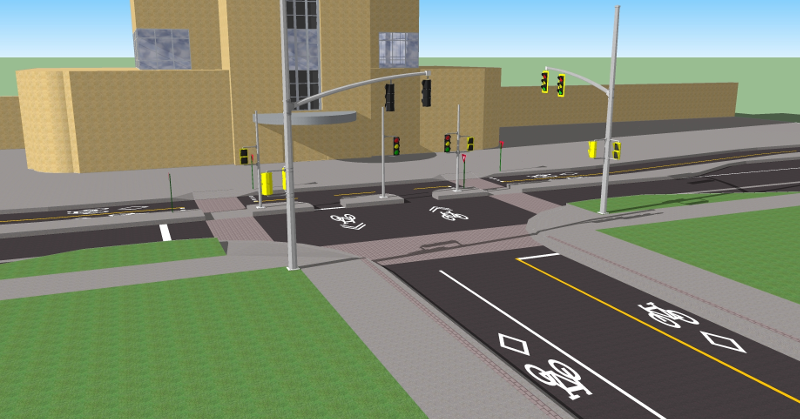 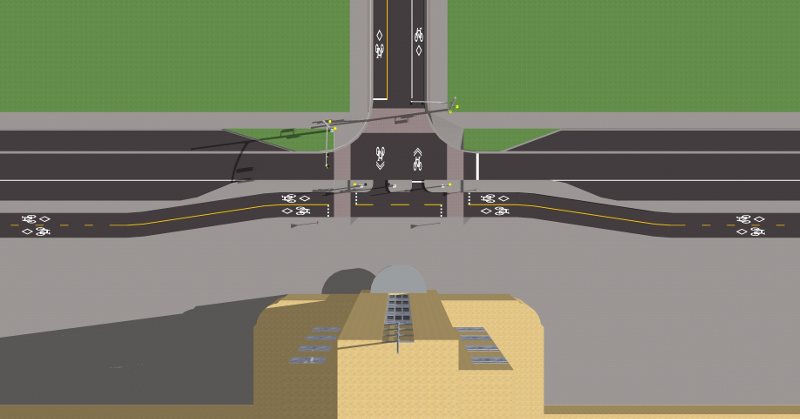 It is not clear why the City cannot proceed with such an installation, since much of the design work is already complete. Without continuity across the stretch between Catharine and MacNab, the usefulness of the bike lanes is severely reduced - especially for eastbound bicycle traffic, which doesn't even have the option to ride in mixed traffic.

Bike Boxes but No Barriers

Unlike Hamilton's infamous invisible bike box at Studholme and Aberdeen, these bike boxes will be painted green and marked with bike stencils for visibility.

Unfortunately, the bike lanes will not be physically separated from the automobile traffic on Hunter - not with curbs, bollards, planter boxes, parked cars or anything else.

Instead, the bike lanes will be buffered from traffic with "atypically thick pavement markings," according to the manager in charge of the project. In other words, painted lines.

The clear evidence from cities around the world is that physically separated bike lanes are both the safest design and also the most successful at attracting new riders. It is a real shame that the City of Hamilton is not following best practices for this project, which has been in the works for several years.

However, staff suggested that they might revisit the idea of physical separation in the future.

I was hoping this installation would include some pavement resurfacing as the section of Hunter Street west of James is pretty rough for cycling on. Maybe they will at least patch it up while they're out painting the lines.

As for the disconnect, cyclists heading east on Hunter will have to turn left on MacNab across traffic with no traffic signal present. Or, as some will inevitably end up doing, continue down the one way portion to James. It would be nice if they could at least continue the bike lane, even if only the eastbound one, to James, where cyclists could easily make a right turn.

Correction to the above - there is a much needed pedestrian signal scheduled for Hunter and Macnab, which will make it easier for cyclists hitting the dead end on the bike lane.

Also, not protecting the lanes means you can expect a lot of this:

Seriously, stop. This street has much-needed surface parking on both sides and would never accommodate 2-way vehicular traffic. Come live in the area for a while and you'll see.

This is sarcasm, right? Catharine is one of the most useless one way streets in the city. It carries extremely low traffic counts but is three lanes wide. The only block that would be a squeeze for two way (actually just half a block) is between augusta and the tracks - and that stretch only has two parking posts on it.

Does anyone know what the fine is for parking in a bike lane? I see it all the time and will issue my own 'warning tickets' explaining what danger they put cyclist in by forcing them out into traffic. I will also state the fine they will get next time if they get caught.

Once again Hamilton takes a great idea and messes it up with crappy implementation. Sigh...

The Hunter bike lane vanishing just where it is most needed near the GO station. Sigh...

A counterflow lane with a gap in it, rendering it useless for all but the shortest trips in the counterflow direction. Sigh...

The most frustrating part for me is that it ends at Liberty. There is no reason whatsoever that this can't be extended to Wellington.

bike staff had this suggested to them multiple times last year and their best response was "there is curb-side parking along the south curb from Wellington to Liberty that residents need".

And every time the reply was "Ummm, there is curb parking along the south curb all the way to John."
As you state, zero reason at all this couldn't be done.

Whoever is at city hall tinkering with the best practices from the rest of the continent needs to knock it off. Stop trying to be creative. Just copy what is working in hundreds of other cities. Only Hamilton can continue to find ways to water down the simplest of concepts and make them more useless.

I would suggest you email your councillor and cycling staff. Just keep filling their inbox until they do it properly. Many folks have done this the past few years regarding the lame bike box at Aberdeen/Studholme.

I suspect we would have one of those Chinese-style, multi-day traffic jams if this was converted to two-way

Agree on all counts, other than the bike boxes. I've seen them in operation in many North American cities ranging from huge cities to smaller towns and they work great WHEN the city makes it clear that cars are not allowed in them. Why on earth we are suggesting cars can still turn right on RED through a bike box is beyond me. We all know where this is going. Car pulls up, no bikes are there so the driver fills the bike box waiting to turn right, then cyclists arrive only to find a car in the bike box. Ridiculous.

Yeah, cause it's not as though the exact same street, with the same width, can accommodate two-way traffic and bilateral curbside parking in the North End

As I've mentioned before, I wouldn't even bother at 1-lane-wide for a protected bike lane. At this point the downward side of Clairmont is only two lanes anyways, just use the whole thing and paint a yellow (maybe a double-yellow-line + knurl like the silly Beckett rebuild) on the upward side. Boom, no need for new barriers, no need for new plowing strategy. Only real rebuilding would happen at the intersections.

Has any city been successful at keeping car drivers out of bike boxes? Everywhere I have been I have only seen this treatment lead to dangerous conflicts between people and two-tonne lethal weapons.

The four safe intersection treatments are:

1) Simultaneous green for cyclists and peds. 2) Protected roundabouts. 3) Protected bike paths through the intersection. 4) Unravelling of routes so cyclists don't go through car intersections in the first place.

The section headlined "Intersections" at this article has photos and video showing how these work.

So, Catharine is only in the north end? Good to know. Thanks for the update. I guess the stretch I ride on, from King up, where it gradually gets smaller and smaller, is good to go with 2 ways.

Will you be paying for all the collision damage on my vehicle? Or is that just a 'suck it up' type thing that's part of living in the 'complete city'.

I know you're being sarcastic, but, uh, do you normally clip other cars on narrow streets? If so please leave your car at home. Then nobody has to pay for any damage, and everyone stays safe.

You're obviously talking about this. Catherine is definitely a side street past this point. Every side street on the mountain, that has parking on the side, is two way. People go slow, yield to each other when needed, and nobody smashes head on into anybody else.

Great news about the Hunter Street bike lanes. Great news about the contraflow. Still unfortunate that they continue to build disconnected segments. Hilarious that they skipped the GO station, the most useful part, especially with a bike share coming. The contraflow is broken with that gap unless everyone jumps on the sidewalk. But progress is a good thing, and they obviously spent some money on it, having put up contraflow lights; that's great news. The design this student submitted is awesome, go for it!

that 'student' was actually an intern at City Hall. He was told to take his name off his RTH submission because after all, we can't have some intern suggesting logical, common-sense solutions on a whim when his so-called superiors need 7 years to figure out what to do.

One added note to this discussion which others have mentioned here, other forums, twitter etc.... is the complete lack of usefulness of these new bike lanes by not doing the whole street.

My bike commute takes me from King/Locke to almost Gage Park. Currently I have to weave through downtown to the rail trail at Corktown Park. These new lanes would have been perfect for taking Canada to Hunter and Hunter to Ferguson which connects to the rail trail. Instead, I'll still have to do my weaving routine. They will lose a massive amount of potential riders simply by being too timid in front of the GO Station. It's like building the Linc only from Garth to Upper James, but with no exit/entry ramps.
People would think that's nuts, but it's exactly what we do with our bike 'network'.

More like having the Linc end at Garth, detour everyone through the city, then get back on the Linc where it re-starts at U Wentworth. What's the point of even having it lol.

Yeah, to cross town I will stay on Main. There is no point to use Hunter only to end up getting back onto Main anyway.

Hey Ryan and group,
Do you think there is any chance of convincing Daryl Bender and the city staff to move a few of the bollards from Bay close to Bold Street bump out to Hunter street. There are a lot there, frankly too many in what could have been solved with a physical (sidewalk concrete) bump out.