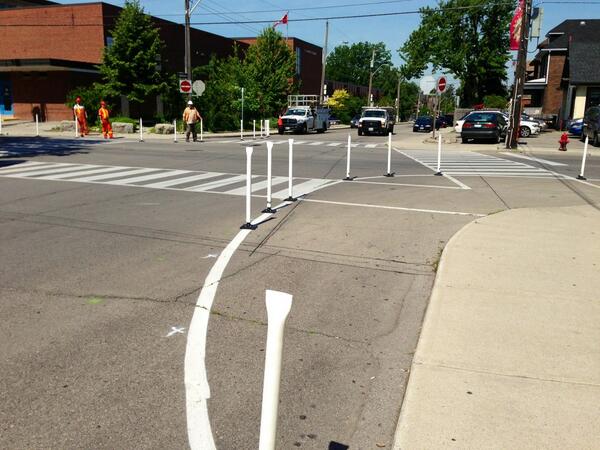 According to the City, knockdown sticks are "retro reflective silver on a white stick and are about three feet high. They can be knocked down by a vehicle or by hand and will stand back up by themselves."

The knockdown sticks come a few weeks after the City painted bumpouts and zebra crossings at the intersection in response to a meeting with a group of urbanists on how to make the street safer for pedestrians.

The project was initiated in early May after a workshop and public talk on tactical urbanism, in which citizens undertake low cost, low risk actions to improve the public realm and inspire leaders to make the changes permanent.

One of the projects that came out of the workshop was the bumpout installation at Herkimer and Locke. When the bumpouts were installed, I asked the crossing guard what she shought. With immediate enthusiasm, she said, "I like it!" The guard did not know who had installed the cones or why, but she was highly supportive, saying it made the corner a lot safer.

The traffic calming "really controls the traffic. It was getting scary," she said, noting that the bumpouts forced the cars to slow down instead of racing aggressively through the intersection.

After an initial bad reaction to the tactical urbanism acts, the City subsequently agreed to start working with community groups to make needed improvements.

It's intimidating for pedestrians, especially the numerous children who walk through it on the way to and from St. Joseph's School.

The bumpouts at Herkimer and locke do two things: they extend the safe space for pedestrians beyond the narrow width of the sidewalks, and they establish a tighter corner radius for drivers so they need to slow down when turning.

The intersection is also slightly askew, and bumpouts on the northeast and southwest corners help to make the crosswalks more square as well as making the crossing distance shorter.

With the traffic calming measures in place, pedestrians have more room and are now more physically separated from motor vehicles, and drivers are encouraged to proceed more slowly and carefully through the intersection.

Other Corners Need Help Too

The City is treating this as a pilot project, but it already shows signs of a new commitment to walkable infrastructure.

Certainly there is no shortage of high need, high priority sites for the City to address. In a recent article, Beasley Neighbourhood resident John Neary argued that vulnerable neighbourhoods should be the City's highest priority for traffic calming projects.

Tactical urbanists also painted a crosswalk at the corner of Cannon and Mary Streets, and the City has not followed up its removal of that crosswalk with a more permanent solution there.

Neary pointed out that the corner of Cannon and Smith is also host to a school, St. Brigid's, but the corner does not have a croswalk at all, let alone a crosswalk with bumpouts and zebra stripes or a 40 km/h school zone.

On Cannon between Wentworth Street and Victoria Avenue, there are no signed or signalized pedestrian crossings at all - a distance of 650 metres.

Other Corners Ned Help To,

We need these at KIng St. East and Ottawa, please! And a longer walk signal that operates separately from the advance left turn signal. If you are stuck crossing in the intersection and the flashing red hand appears (which signals to pedestrians crossing to quickly finish crossing, per city of Hamilton pedestrian signal guidelines), cars will angrily make turns in front of or behind you, too closely for safety. Hair raising if you have small children with you.

I can name at least 10 intersections in the east end of the lower city off the top of my head that needs this. Badly. It's ridiculous.

It's time for Hamilton to take Toronto's lead and make ALL major intersections have ladder/zebra style crosswalks. There's really no reason not to. I'm not sure if bumpouts are feasible at every intersection, but whats the harm in putting down a bit of extra paint to increase visibility?

King and Bay is one of the most dangerous intersections I know of for pedestrians. Two lanes of traffic off of Bay turning left, and very few drivers bother to look to see if a human being is crossing King. Can't tell you how many times I've had to leap out of the way to avoid getting run down....

GoogleMaps hasn't got evidence of it, but there's a zebra by the Burlington MEC as well.

Councillor Farr lives just east of Gage Park, so he would appreciate this tactical incursion.

Blue-and-white posters posing that question are tacked to hydro poles near the King and Main intersection in central Hamilton.

Graham McNally, a local architect, put them up. They're part of a project called Walk the Delta, which emerged from a "tactical urbanism" charrette — a brainstorming session held to solve a design problem — organized by the Hamilton/Burlington Society of Architects.

"It's pretty clear that it's very car-oriented," McNally said, noting that the traffic lights are pedestrian activated, and the concrete triangle that sits in the middle of the Delta's gateway intersection, connecting pedestrians to King and Main streets, is narrow.

The Delta stretches from Gage to Kenilworth, and the Mountain to Main Street.

But while he and other architects and planners might look at the area and come up with their own ideas, McNally is most curious to know what residents think.

That's why he hopes to hear from neighbours through the Walk the Delta blog, the hashtag #walkthedelta and the posters that offer the thought, "I would walk the Delta, but …" with an empty space below for passersby to give feedback about the area's walkability.

Since the posters went up at the end of April, the response has been minimal. But one in particular stood out to McNally: "I don't know what the Delta is."

His response: "It's just not a place for people."

Walk the Delta isn't just about posters and a social media presence — it's about getting the public out and encouraging them to think about their communities.

It's about trying things out cheaply and quickly to allow for testing and learning, he said.

Mary Bowness, who lives in the Crown Point area near Main Street East and Kenilworth Avenue North, believes in the philosophy "it's all about the neighbourhood."

Having lived in the Delta for three years, she thinks it would benefit from traffic calming, which could be done visually — inviting motorists to engage with what's going on outside of their vehicles, so they're thinking about their whole journey and not just the destination.

Maybe it's a banner, reading: "Welcome to the Delta."

Whatever form it takes, Bowness, who sits on her community's walkability committee, wants it to remind drivers that there's more to the street than cars.

Ward 4 Councillor Sam Merulla said that while awareness of what's needed is growing within the community, there's a lot of work that needs to be done to make Hamilton pedestrian-friendly.

Being an older city, Hamilton inherited a lot of car-first infrastructure, but over the past decade, the planning focus has shifted to ensure every mode of transit is seen as a priority — pedestrians, cyclists, vehicular traffic and public transit, he said.

"We are moving in the right direction."

Ward 2 Councillor Jason Farr said he knows the pedestrian experience is a selling point for any successful city, and he's looking forward to the city's pedestrian mobility plan, which has been in the works for several years.

The plan looks at how pedestrian mobility factors into infrastructure plans for Hamilton — "bumpouts and crosswalks and all those things that make streets safer and more pedestrian friendly," he said.