According to a news release from the City, the reconstruction of the Beckett Drive escarpment access will remain closed until mid- to late-October. 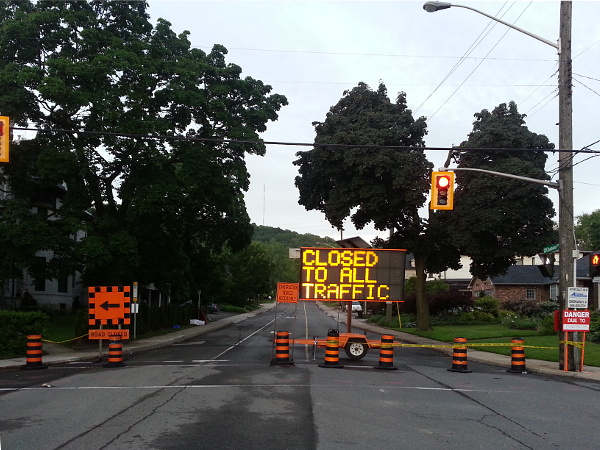 Queen Street south of Aberdeen is closed for the summer

The access was closed between Aberdeen Avenue and Fennell Avenue on June 3 to rebuild the access, construct new retaining walls, improve drainage and widen the sidewalk south of the top of the Dundurn stairs.

It was supposed to re-open on Labour Day weekend, but complications in the reconstruction work mean the work won't be finished in time. The release quotes Gary Moore, director of engineering services in the Public Works Department:

The delays are no fault of the contractor. The construction schedule was aggressive and this is a very complex project made more difficult because of the unique characteristics of the escarpment cut, slope stabilization issues and the presence of Butternut trees, which are an endangered species and required extended collaboration with the Ministry of Natural Resources.

Contractor hours have been extended to get the job completed as quickly as possible, and the City plans to work with Mohawk College, Hillfield Strathallan College, McMaster University and St Joseph's Hospital to mitigate traffic impacts once school starts again.

Beckett Drive normally carries 21,000 automobiles a day on just one lane in each direction. During the closure, traffic volumes have been high on the nearby James Mountain Road access, but the other accesses, including the Jolley Cut and Claremont Access, remain free-flowing even during rush hour.

I'm kinda stunned that they aren't widening the lower sidewalks and completely removing 1 or 2 lanes above the access. Why does a 2-lane road need to widen to 5 lanes on top?? One of the lanes is a right turning lane onto a dead-end street with about 25 homes. The sidewalks above the access could be wonderful if we totally removed a lane of traffic. With the extra space, the sidewalks could have been like this, with the green boulevard, creating a great walking/exercise corridor for all the folks using the stairs and coming from adjacent neighbourhoods:

This stuns you?? It seems that when yokels-i mean staffers- need to design streets in hamilton, they go down at "rush hour" to count cars and when they run out of fingers and toes they determine the answer is "alot [sic]" and proceed to follow "400 series design principals [sic]" in order to make sure there's no "gridlock".

Here's a question... how many travel lanes cumulative across all accesses does hamilton need? Since these cuts were made we've installed two fully separated highways. What if we cut all the inner city accesses to one lane up and one down? Answer: no mayhem and safer streets for all.

But we'd no longer be able to move "alot" of cars.

I think we're seeing the answer to that question with the closure of an access that carries 20,000 cars per day. The Public Works guy - Gary Moore - was on radio today and said the Claremont and Jolley Cut still have tons of capacity to handle anyone still looking for the quickest route. So in other words, we can remove a 20,000 car road from our network and be just fine. Granted, it is a needed link between west Mtn and West End so I'm not sure permanent closure is the answer, but certainly we should have no problem taking a full lane on the Claremont for a separated 2-way bike lane from Mohawk College all the way to Burlington Street, and another 2 full lanes for LRT tracks. We should also narrow lanes on the Jolley Cut to provide bike lanes ALL the way up and down. Ditto for the new Queen St Hill.

Anyone know why they widened the sidewalk only halfway down the jolley cut? Some reason they didn't go all the way?

And I agree pointless to have an up lane (which is a challenge for casual cyclists) but not a down lane (which would be easy for all cyclists to use).

That said, they recently introduced bike lanes on a 10 block stretch of Queensdale on the mountain (between U. Wellington and U. Wentworth) and I can't for the life of me figure out what their purpose is since they're not part of a larger network of cycling infrastructure. It would be great if they connected to cycling lanes on wentworth to go up to limeridge, or down to concession, etc. but as it is, a 10 block stretch of bike lanes on a street that previously was wide enough for cyclists to safely ride beside cars, well...it just seems like it was set up to fail, so they can say "oh, we tried, no one used it".

a pilot project?? What exactly are we piloting?? Bike lanes exist all over the world. Hamilton is hilarious sometimes.

I should also add to my comment above that the Claremont has had a full lane closed since the rockslide a year ago. So, we've taken away a 20,000 vehicle mtn access AND an entire lane of the Claremont, yet the Claremont and Jolley Cut have tons of extra capacity still.

what are we piloting? a sinking ship

I see that the electronic sign is still saying "September."

Was at the Pool at Inch Park yesterday between 5 and 7pm. While watching my daughter I did a "yokel" count of bikes riding on it; 73 mostly teens.

sounds like alot, we probly need a multi-lane bike hiway