Canada is Still Part of the Climate Change Problem

Arguably the most important thing to your future that's happened lately is the international effort to confront climate change, but much of the public is unaware and uninterested, and news coverage is puny or nonexistent.

Before US President Donald Trump came along, Canada was the worst international player for years, working to undermine agreement and make the problem worse harder than any other nation.

Seriously, Canadians don't like to hear it, but we were the biggest jerks at the table.

Although the new federal government under Prime Minister Justin Trudeau campaigned heavily on showing real climate leadership, the token efforts they have made to address the problem are window dressing that hides policy decisions guaranteed to make the problem much worse.

After promising to significantly reduce emissions, they have chosen to massively increase them instead. When you are at the bottom of a hole, you have to stop digging.

The provinces of Alberta and Saskatchewan in particular have bet so heavily on fossil fuel production that Canada is now more committed to a higher carbon economy than any other industrialized country on Earth. 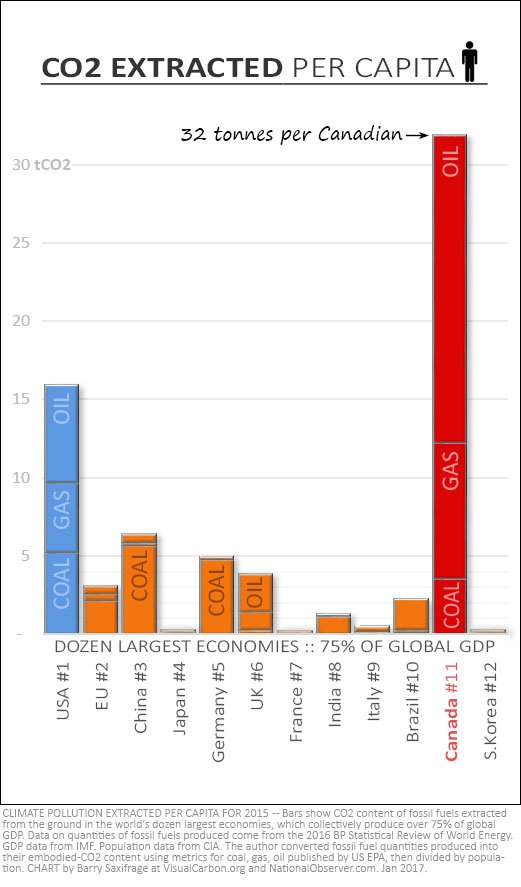 British Columbia's newly announced climate change plan is a promise to do nothing useful for more than a decade before beginning even token efforts.

Even more irresponsible, Alberta's climate plan is to increase its emissions to half of Canada's entire carbon budget by 2030, forcing the rest of Canada to cut their emissions by 50 percent in the next fifteen years so Albertans don't have to make any cuts. Does that sound fair to you?

Alberta could choose to be a leader as Canada, and the world, faces the challenge of climate change, but so far, they are choosing to be a millstone around the neck of the country, and the planet.

Alberta's growth in emissions was more than the reductions from Quebec, BC, Nova Scotia, New Brunswick, Newfoundland and Labrador all added together, so even though many in the nation are showing leadership on climate change, Alberta erases all of that good, all by itself.

Signing a climate agreement in itself means nothing. What's important is whether governments take actions to fulfil the obligations within it. One of the obligations is that the wealthier industrialized nations, who created the problem in the first place, need to help developing nations to be able to raise their quality of life in a lower carbon way than we did.

A hundred billion dollars a year just might be enough to make that happen. As usual, there are people on the internet expressing outrage that Canada would be making billions available to developing nations to help them deal with climate change.

Canada has the tenth-largest economy on the planet (by nominal GDP). Our pledge to provide $2.65 billion over five years is pretty much sticking our tongue out at the idea that we should take responsibility for a mess we helped create.

We can own that and act on it, clean up our own act and the mess we helped make, and provide a shining example to the world that we can be proud of. Or we can keep racing to make worse a looming catastrophe that is going to hurt us along with everyone else.

Which one of those things sounds like a better idea to you?

What does it mean that we are spending more than 64 times as much money making the problem worse than we are dedicating to trying to make it better?

Canadians are not responsible for the weather and neither is anyone else! There is no climate change problem so we have nothing to worry about! This is just more baseless fear mongering. CO2 is a blessing and a gift and we are very lucky the oil companies were there! Now we can see the benefits of CO2 from the greening of the planet. There are no such thing as GHGs, a fact that was proven back in 1856, so AGW is a lie and a fraud!

So let's see, on the one side of the argument we have the largest collective scientific effort in all of human history, plus agreement from every single professional academy of publishing scientists on the face of the Earth that climate change is a major concern, with the Pentagon calling it a threat multiplier and "the mother of all risks," and the entire insurance industry telling us it's rapidly escalating losses due to natural disasters (while waving around the receipts, so they should know), and the World Health Organization telling us that it's seriously impacting human health, and the World Bank and a majority of economists telling us it's a clear and present danger to the global economy, and all of the agencies that deal directly with refugees telling us record refugee numbers this year are nothing yet as the crisis magnifies, and let's not forget all of the world's thermometers, satellites, rainclouds, tropical storms, wildfires, glaciers, and so on endlessly proving the projections of the science true over and over again in real world daily news events as temperature records shatter all over the place, and on the other side of the argument we have a lingering handful on the internet belligerently insisting that they know better than all of the world's authorities in dozens of fields of expertise while ignoring painfully obvious real world events. Gee, tough call.

At this point, those that can and will try to do something about global warming have to keep doing what they/we can do. We have to accept that there will be people consistently denying CC in the face of the overwhelming evidence supporting it.

We also have to accept that if we do get through this and manage to keep this planet livable, those same deniers will be saying 'I told you climate change was fake news - we're fine!'

To me, those people are unimportant. The world is getting on-board fast. https://www.greentechmedia.com/articles/...

News story today that the Mumbai airport just set the daily record (1000 aircraft) for take-offs and landings. Canada's 1% of Global emission contributions is dropping fast. Pretty soon we could all leave the country and let it return to nature and it would have virtually no impact on the world.

Canada officially accounts for 1.67% of the world's greenhouse gas emissions. Canada also has only 0.475% of the world's population. That means that of total current global emissions, Canada takes up 3.52 times our fair share of a number that is collectively far too large to begin with. That number is also clearly artificially low because the way it is calculated leaves out a number of glaringly obvious considerations. In any honest assessment we also bear responsibility for emissions from factories that were offshored in order to slash wages but that are still producing products exclusively for sale in North American markets, because that's our stuff and therefore clearly our responsibility. Canada is also responsible for the emissions resulting from burning the roughly 5% of global fossil fuel exports that come from us. So we're emitting several times more than our fair share. And let's not forget that for roughly a decade Canada was doing more to obstruct and undermine international climate talks than any other nation on Earth, which is how we collected all of those international fossil of the year awards. Any claim that we bear no responsibility to act is not defensible, it's classic whataboutism.

It wouldn't matter if Canadians made 99% of the world's CO2 and we completely quit cold turkey, it still would have zero effect on climate. CO2 has nothing to do with climate. CO2 is plant food!

So the reason that you feel I should want to gamble my family's well being on a bet that you personally know better than every professional scientific organization on the face of the planet was what, exactly?

I checked wikipedia for CO2 emissions, and there appears to be material differences in your numbers, if you check "List of Countries by Carbon Dioxide Emissions per capita" (from fossil fuels-2013) (Sorry I'm not capable of providing a hyperlink). It shows Canada at 13.5 metric tonnes per capita compared to 16.4 MT/capita for the USA, and with the same link the EU at 8.6 MT/Capita, for 2011 (a different spreadsheet in the same document.)

Canada may not be down to EU numbers, but per capita numbers have dropped 25% (per same link) since 1980. The federal and provincial governments need to push energy efficiency on areas like housing and other construction, ideally to passive design levels similar to some European countries. Further subsidies/tax incentives should be provided to upgrade the poorest quality housing to higher energy standards. Its terrible all these glass tower condos in the Toronto core that are going up with only double glazing, each unit has relatively small utility bills, because they are such small units, but on a square foot basis there high. I'm optimistic that eventually electric vehicles will make sense, but this could ten to twenty years before they have a material impact.

Canada will never get down to EU numbers given our climate, population density, distances, natural resources, and how cities and communities are laid out.

I realized after the fact that this was comparing apples to oranges. Extraction is a poor measure to do any comparisons. If a nation imports all its oil,gas, and coal, the extraction /capita information will provide a false impression of how a nation is doing.Consumption of these forms of energy are the issue.