Motion to Convert Queen to Two-Way Amid Regular Traffic Carnage

Councillor Whitehead's motion would refer the two-way conversion of Queen to the 2018 Capital Budget process.

Today's City Council meeting includes a motion to look at converting Queen Street to two-way between Herkimer Avenue and Main Street - and not a moment too soon, as yet another collision has just flipped a car over at Queen and Charlton.

In the manner of that old Vulcan proverb, Only Nixon could go to China, the motion is being presented by Ward 8 Councillor Terry Whitehead, who has finally seen the light when it comes to Queen Street. Noting a recent consultant report that estimated a $1.1 million cost, Whitehead's motion would refer the project to the City's Capital Budget Process for approval in the 2018 capital budget.

Meanwhile, almost exactly a month after a car was flipped on its roof onto the sidewalk at the corner of Queen and Charlton Street West, another serious collision has flipped a car on its side and left another on the sidewalk at the very same spot this morning while children were walking to school. 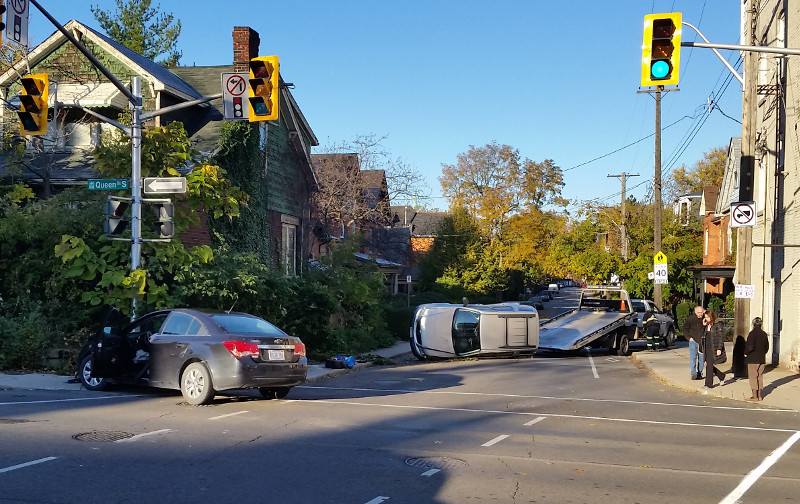 Collision at Queen and Charlton on the morning of November 8, 2017 (Image Credit: Nicholas Kevlahan)

Queen Street, a one-way minor arterial with three southbound lanes north of Herkimer Street, has been an absurdly dangerous thoroughfare for decades.

Residents of Wards 1 and 2 on either side of Queen have been calling for two-way conversion and traffic calming for years. A 2012 motion to convert Queen to two-way was watered down to a "study group" in which residents prepared a detailed block-by-block audit that was subsequently ignored.

City staff undertook a safety audit in 2014 after a spate of serious pedestrian collisions and implemented a few minor tweaks, including a zebra crosswalk at Hunter.

In 2016, after Council punted yet again on a two-way conversion proposal, staff decided to implement a 40 km/h speed limit but rejected a request to add "NEW" signs above the new speed limit signs because it would be too expensive.

In response to this morning's collision, a nearby resident observed that the traffic cones that were placed on Charlton in the aftermath of the crash had the effect of significantly reducing vehicle speeds and proposed to Traffic staff that more permanent bollards may be an effective way of reducing the risk of more collisions here. 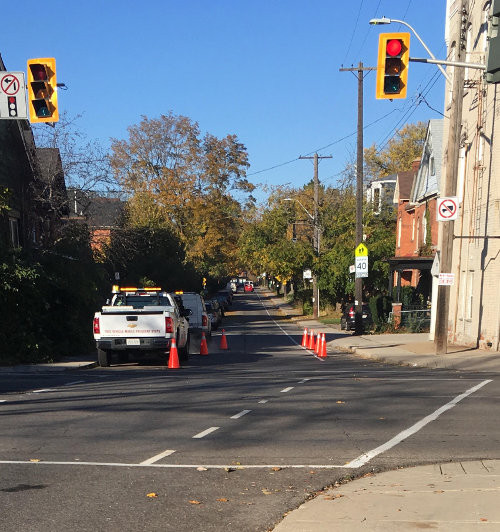 The resident wrote to the City to recommend adding bollards on Charlton. "Even if it won't reduce speeding cars on Queen, slower cars on Charlton will reduce the likelihood of collisions at that intersection." 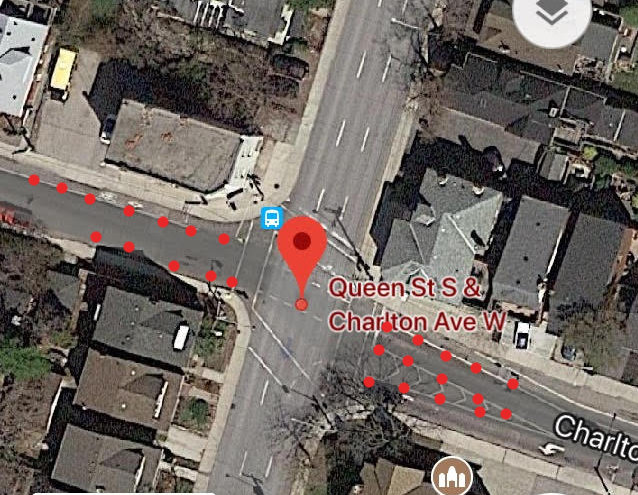 Of course, staff are reluctant to install bollards to physically protect bike lanes if it means making it slightly more difficult to clear snow. Pointedly, the resident argued, "Any concerns about operational costs that might have prevented their installation before need to be trumped by the increase in safety they would bring."

David Ferguson, Superintendent of Traffic Engineering in the Public Works Department, agreed to ask staff to look into the proposal.

Text of the Motion

Following is the text of Councillor Whitehead's motion to this evening's Council meeting. Since the City's committee meeting website is unusable by design, we can't link directly to the motion, but it is Item 7.6 in the agenda.

The Council meeting will be held in Council Chambers at City Hall, 71 Main Street West, and starts at 5:00 PM.

(a) That, based on the report prepared by AECOM Canada Ltd., the matter of the conversion of Queen Street from Aberdeen Avenue to Main Street from one-way to two-way traffic operations, at an estimated capital cost of $1,100,400 for the detailed design conversion, be referred to the Capital Budget process (GIC) for consideration;

(b) That, should the design and conversion of Queen Street from Aberdeen Avenue to Main Street from one-way to two-way traffic operations based on the report prepared by AECOM Canada Ltd., be approved during the 2018 Capital budget process, staff be directed to included the estimated annual operating cost of up to $160,000 for snow removal, in the Public Works Department 2019 Operating Budget (Public Works), for consideration; and,

(c) That the Mayor and City Clerk be authorized and directed to execute any required agreement(s) and ancillary documents to give effect to the conversion of Queen Street from Aberdeen Avenue to Main Street from one-way to two-way traffic operations, in a form satisfactory to the City Solicitor.

That's not an accident. It's a movie set. No one in their right minds would drive like that on a residential street. Stop the fake news.

Why does the proposal limit the conversion to Main St? If they carried it to King St, you'd open up a whole new traffic pattern that wouldn't require driving through Kirkendale.

we in Strathcona have been asking this for years....along with questions surrounding the constant 'no' from city hall for a single safe crossing between King and Cannon.

Traffic cones as a clandestine trial for bollards is very clever.

Was this already standard trialling, or an official city-planning adoption of the earlier urban guerilla techniques written earlier on RTH?

Call me cynical, but I fully expect Whitehead to pull a "You know, I'm a champion of this 2-way conversion. I brought it to council and pushed it into the capital planning process. But after much reflection I cannot in good conscience support this. My constituents…"

The guy has form, after all.

Yiikkess!!! Spoke too soon. Drove down Hess this morning to discover yet another new 4 way stop. Complete street now! (No more cyclists on that street (unless they disobey the stop signs ;)