The proposed design is a huge improvement on the status quo, but it can be improved further with a few adjustments.

The city has published a proposed design for the Claremont Access cycling facility and included detailed drawings [PDF]. 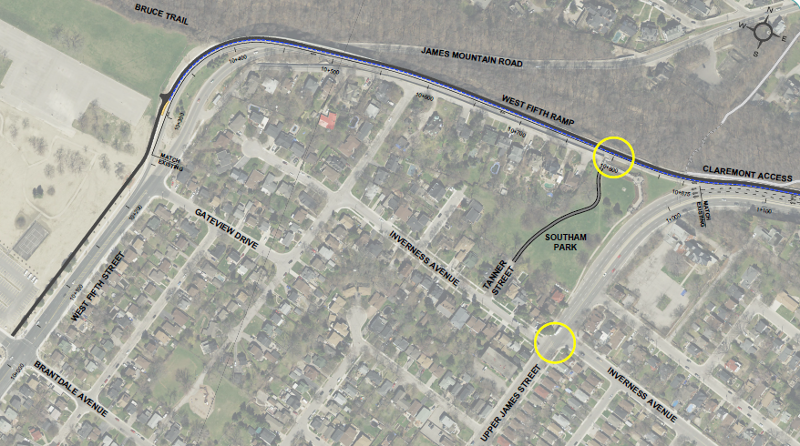 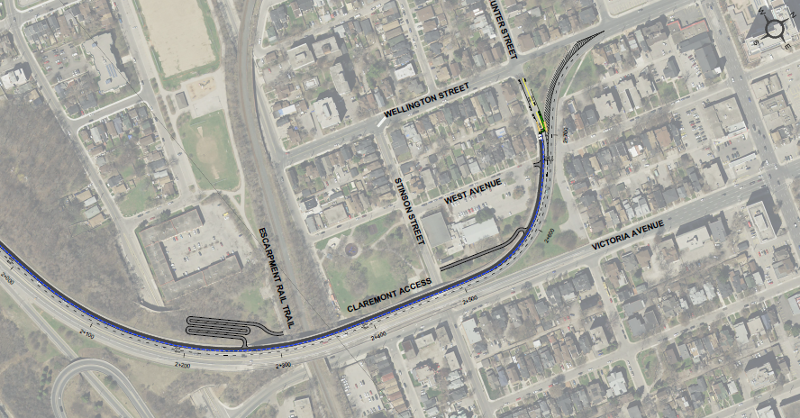 However, there are some problems with the proposed design. On a path with a width of as little as three metres, it is proposed to mix upbound cyclists, downbound cyclists and pedestrians.

Simply coasting downhill will result in people reaching speeds of 40-50 km/hr. This is quite safe in itself, but mixing those bicycle speeds with pedestrians is not.

Currently, there are no sidewalks or any other pedestrian infrastructure on the Claremont Access. If pedestrian traffic is to be accommodated on the new infrastructure, this should be done by way of providing a sidewalk for pedestrians.

In several places on the drawings, the proposed design puts a "Multi-Use Path" right next to a pedestrian sidewalk. One example is on the drawing entitled "West Fifth Street Pathway Figure #7." 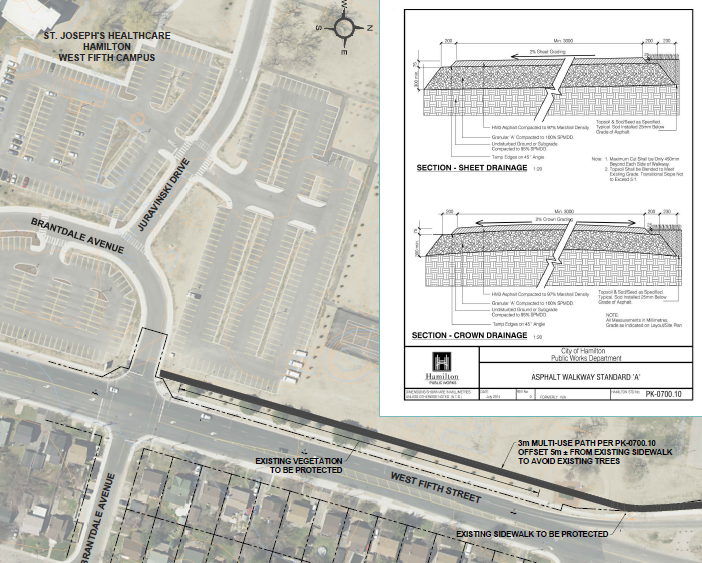 In this and every other case where there is a sidewalk, this should not be a multi-use path. It should be a cycling-only path and the sidewalk should be pedestrian-only. 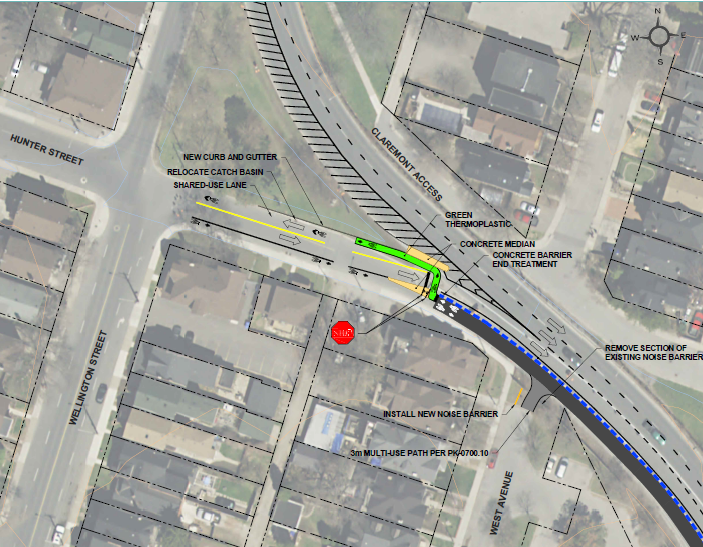 It is always Not Recommended to place Stop signs at the bottom of hills. It is human nature that people who have put so much effort into going up the hill will be very reluctant to have all that effort wasted by stopping at the bottom after coasting down.

That makes the currently proposed design problematic, particularly because there will be a large volume of traffic heading to the Hunter Street GO station and downtown destinations.

This fix enables someone to coast down the Claremont Access, and then seamlessly continue coasting Westbound on Hunter Street. This prevents wasted effort and momentum, and enables considerable savings of time and effort for people travelling to the GO station or other destinations. Most importantly, it avoids the dangerous situation of the present design.

According to the Claremont Access Cycling Facilities – Criteria Rating Table from the Openhouse, looks like they can fund almost every other project for the same cost of the Claremont Project at $1.8M.

Looking at the designs, I was a little worried about the comparative lack of elaboration on the Upper James connections.... to me the UpperJames and St Joe's connections are the most important ones, since they connect the bike track to more central locations than the "default" endpoints do.

Also, I had one small request: a lookout / parkette halfway up. At the spot where the Claremont widens from 3 lanes to 4, there's an opportunity to claim some space for the bike track by delaying the widening of the car lanes. Clear some of the brush to open up the view and put some benches and a picnic table there, so leisure-cyclists can have a nice break in their climb.

http://www.hamiltonnews.com/news-story/6825360-skelly-wants-to-make-upper-james-pedestrian-friendly/ "Donna Skelly wants to see more trees, boulevards and other amenities added along Upper James to make it safer and more welcoming for pedestrians." Maybe there is still some chance of some changes on Upper James. My wife & I attended the info. session and I would say I thought the plan is fairly good. One thing I thought is missing is connecting east on the Mountain. Presently the city is in the process of installing traffic lights at the intersection of Upper James and Inverness Ave, these have been badly needed for many years. The suggested crossing now would require you to take your bike up some stairs and through Southam Park to connect with Inverness West at Tanner St. Tanner is more like an entrance to the park and the path they show is really just a desire path used to go through the park. If it is possible to make a second crossing closer to the bend coming off the access and create a bike lane to the new lights you could easily connect from Inverness East to the existing bike lane on Queensdale or connect to the Mountain Park path. It is really too bad the down bound lane closest to the escarpment is unusable as that would have solved separating cyclist going down from pedestrians and up bound cyclists.

Agreed. That's my biggest worry about this project - the Upper James connection is a very important one, and it sounds like they're making a bad compromise on it. The document they released was extremely sparse on details about that connection, so hopefully that one they're still figuring out. I'm sure the big worry with using the obvious crossing right at the split is the speed of traffic - there used to be a crossing there and it's been closed off. But imho, trying to make that crossing work would be the best option.

and a desire path leading up to that barrier!

That opening was put in for the 2003 Bike race, the same as the turn around where the access ramp joins at West 5th. I'm not sure it would be a bad crossing point as it actually is more visible than the existing one right at the stairs from Southam Park.

I emailed Daryl Bender to let him know that I would like the bike lanes to stay on the south edge of Hunter, as a contiguous cycle track all the way.

Please, no stop sign at the bottom of the hill.

Another thing is about seeing if this can be safely made as a multi-use trail, so pedestrians can enjoy walking up Claremont Access, on the scenic edge.

Uphill bikes can either go in the middle or share with pedestrians -- uphill bikes will usually go slower than a jogger's speed, anyway.

I submitted a lengthy response to the city (daryl.bender@hamilton.ca) but to date have not heard anything further or seen anything on the plan/study site.

Has there been an update of any kind?

This was just posted in The Spectator yesterday: http://www.thespec.com/news-story/698043...

tldr: Because they've dragged their feet on other cycling projects, this project is likely to break ground 2018 at the absolute earliest.

Thanks, I missed that. Dismal news.