Starting this Sunday night, staff will install parking-protected bike lanes on Herkimer and Charlton between James and Dundurn.

In addition, the streets will be reconfigured so that the bike lanes are physically protected from moving automobile traffic by a row of on-street parallel parking. Similar parking-protected designs are in use in New York and other cities, and provide a safer, more comfortable experience for people on bikes than unprotected painted lanes.

Installation of the new pavement markings will be done overnight in segments starting at James and moving west. As a result, temporary overnight parking restrictions will be in effect on the segments where staff are working. The other work, including sign installations and traffic signal adjustments, will be done during business hours. 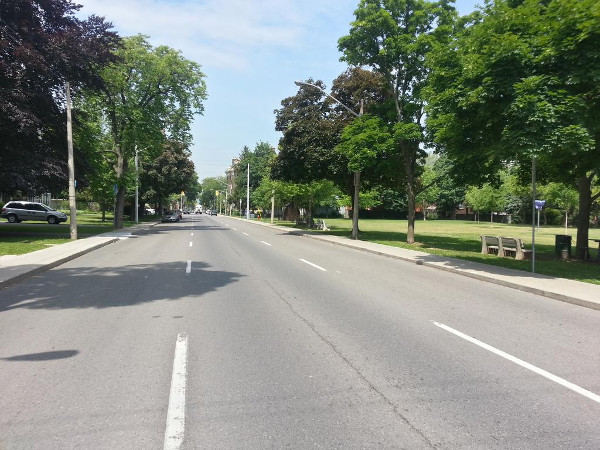 This project has been a long time coming. Staff were going to install painted, unprotected lanes in October 2014, but members of the Durand and Kirkendall Neighbourhood Associations pushed back with a request to beef up the design. The project was put on hold and staff met with the community organizations to consider the proposed design changes. An ad-hoc cycling committee was formed to work with staff on developing a design.

In August 2015, the City announced that they would install parking-protected lanes, but designs were not made public. The final designs were presented at a well-attended public meeting on January 28, 2016 with a stated installation date of spring, 2016.

I have been walking by every few days to see if there's been progress... Excited to ride them soon, to feel the traffic calming effects when driving and walking on the sidewalk. Combined with the almost-ready Durand Park redevelopment, what's been a long time coming will be a great win. Thanks to my cycling committee neighbours, the KNA and DNA and Councillor Farr for your efforts.

Good news: The Durand Park redevelopment is completed. I love the splash pad! This may actually be bad news if you thought we were going to get actual paved paths, but Hamilton has to live up to its motto: "Good enough for the likes of you."

In my abundant spare time (not!) I'll see if I can take some photos and write an article. Aside from the lack of paving, it is really a good park redevelopment, particularly the splash pad.

Can someone point me to a map of the bike lanes?

Can't wait to see these finally installed - it's been a long process!

One clarification - the Herkimer lane ends at MacNab, continues North on MacNab and heads East via a contra flow on Charlton.

I'm glad these optimizations were done to the bike lanes.

Last night after my GO trip coming home West Harbour (and then visiting an event at 294 James), I cycled SoBi home approximately 10:30pm via Cannon and was surprised to see 7 SoBi's and more than one dozen other cyclists (total about two dozen cycles). I biked past less than 50 cars in motion on Cannon during this interval ~10:30pm-10:40pm.

The cycle:car surface ratio actually was pretty competitive for this time period! The road surface allocation is 75% cars, 25% bikes (1 of 4 lanes). It was definitely more than 25% bikes last night during the few minutes I rode from James to Sherman! Hopefully this becomes more commonplace to see road surface area allocation percentage favour bikes over cars, and hopefully eventually during peak period too.

The usage of Cannon has certainly overall gone up.

I look forward to seeing Herkimer/Charlton to quickly gain good ratios on bikes-in-motion versus cars-in-motion.

Ward 2 pb includes a crossing at Main and Ferguson. If we can just have the Hunter lanes properly finished, that would be great connectivity for these.

The outlines are done on Charlton and most of Herkimer - it's looking good!! I like how there will also be a line on the right side along the section of Herkimer where the lane isn't parking protected. It really narrows the driving lane which I really hope will reduce speeding along here ('here' because this is where I live ... ).