What started as a straightforward initiative with wonderful civic engagement, a supportive neighbourhood association, and full endorsement by a city councillor has turned into a murky process with uncertain outcomes.

Over six months ago, I wrote an article about the flawed design of bike lanes planned for Herkimer and Charlton in Durand / Kirkendall.

After that article and subsequent correspondence by Ward 2 Councillor Jason Farr and the Durand Neighbourhood Association, the installation of the lanes was put on hold so their design could be reviewed - an encouraging first step.

In some ways, a lot has happened since that time. In others, nothing at all has changed. Here is an account of the process that has occurred since last October and an update on where things stand today.

Over the course of an evening, we hashed out a revised design following proven, implemented precedents from other cities with the following primary principles:

We got into a fairly fine grain of detail, which you can read in the meeting minutes. 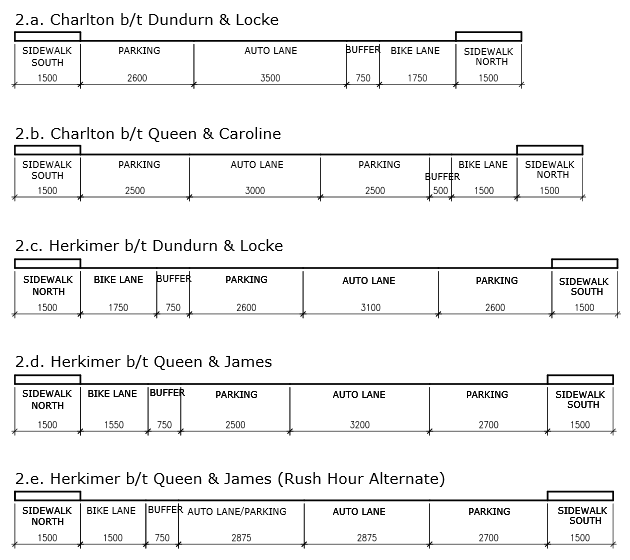 The outcomes of our meeting were sent to the appropriate city staff. Following this, our committee hoped to meet with city staff to review their revised designs. Finally, after nearly two months, we met with city staff members Daryl Bender, David Ferguson, and Lorissa Skrypniack on January 26.

To our dismay, the meeting did not consist of reviewing revised plans. Rather, city staff reviewed their original lane design with us. We then reviewed our extensive criticism of that design and our list of recommendations.

One staff member spoke of hearing of a report that placing bike lanes between a curb and parked cars in New York City resulted in an increase in accidents. This was demonstrated to be the complete opposite of the truth when our committee members found reports that, in reality, these NYC lanes have resulted in significant crash reductions, significant injury reductions, and a near tripling of cyclists within two months of installation.

You can read more about New York's parking-protected lanes and their significant benefits in Kevin Love's article.

As disheartening as it was to see that city staff had done no work on the Herkimer and Charlton lanes, it was at least encouraging to hear that Councillor Farr was willing to fully endorse our committee's plan.

Recognizing that even though what is being proposed has been successfully implemented elsewhere, it is 'new' to Hamilton, Farr went as far as to say that he was willing to take responsibility for the design, taking risk away from city staff.

He directed city staff to create a detailed plan reflecting the comments and recommendations of our committee in time for a March 9 Durand Town Hall Meeting. City staff made no objections to this deadline.

At the March 9 Durand Town Hall, the Herkimer and Charlton bike lanes were indeed discussed. However, no detailed plan was prepared by city staff.

Instead, City Staff prepared two presentation boards with a variety of schematic options for each road. Though some options came closer to our committee's recommendations, none were spot on.

Anecdotally, those I know of who spoke to City Staff about these boards were told very negative things about parking protected bike lanes, despite the considerable amount of data provided to the contrary. 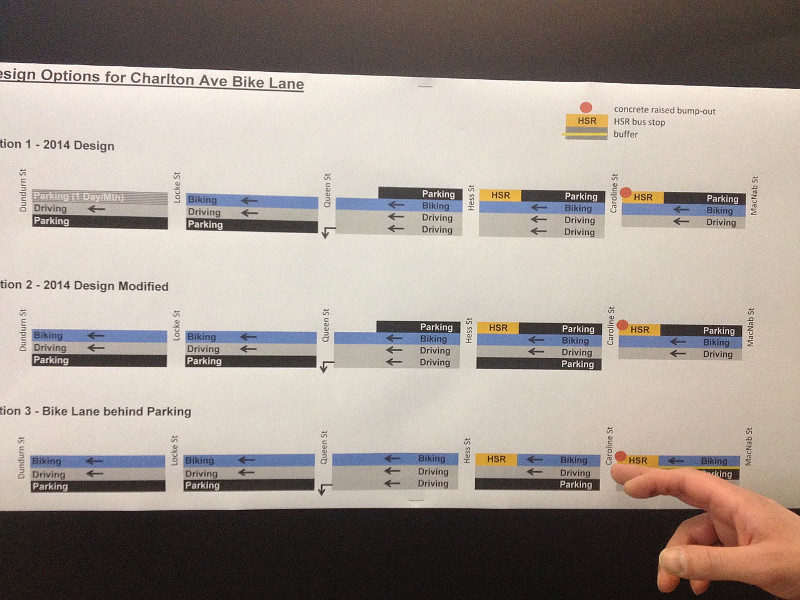 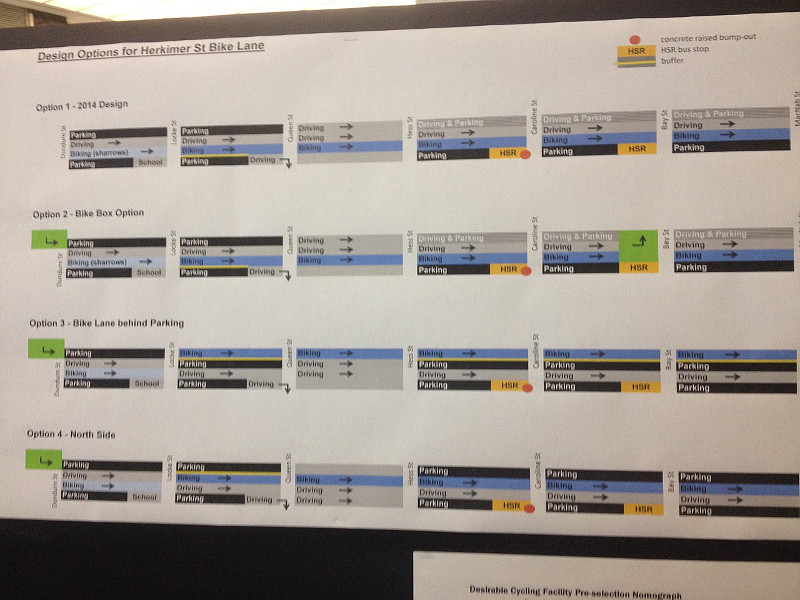 While it was disappointing to see very little work had been done after over four months, it was at least encouraging to hear predominantly positive comments from the citizens who voiced opinions.

Not surprisingly, the dangerous intersection of Queen and Herkimer was emphasized as needing redesign. City staff generally nodded and agreed with the comments made. Councillor Farr reiterated his support.

After 6+ Months, Where Are We?

The short answer is, I don't truly know. I have reached out to Councillor Farr in the hopes that his emphatic verbal support will translate into realized actions by the city. Some of our committee's members have heard grumblings of concern from City Hall about our proposed design, though nothing has been confirmed or directly communicated to us.

On April 24, in frustration, I called city Daryl Bender, project manager of alternative transportation for the city. He was gracious enough to give me the following update:

I asked if some of the rumoured concerns about our design were founded. He stated that certain aspects such as intersections and driveways are always a concern, but he does not see them as insurmountable obstacles.

Like I said, I don't truly know where these lanes stand. While positive and supportive things continue to be said, concrete actions remain to be seen.

What started as a seemingly straightforward initiative with wonderful civic engagement, a supportive neighbourhood association, and full endorsement by a city councillor has turned into a murky process with uncertain outcomes.

The eternal optimist in me wants to believe that these lanes will happen - that they will be implemented, encouraging more people to cycle and making Herkimer and Charlton safer for all road users. I still think we will get there, I just don't know when.

Kyle Slote lives in Hamilton with his wife and three children. He works as an architect at TCA Architects and is past Chair of Young Architects Hamilton. He loves his city deeply and will champion its virtues to anyone who will listen. His infrequent tweets are found @kyleslote.

If we can't even do a decent bike lane, how the heck are we ever going to pull off an LRT?

Kyle is due a big “thank you” for providing the venue for the first meeting of the Durand Cycling Committee. Which was his lovely building at TCA Architects. Trust a firm of architects to have a beautiful building!

Thanks Kevin! The biggest positive so far has been seeing how many great, engaged citizens we have in our hood, yourself included!!

I like the parking protected lanes and I hope they will slow down traffic on Herkimer. Some people treat that road like a drag strip...

Many do treat it like a drag strip and lucky for them the HPS never ever ever do any enforcement for speeding on Herkimer.

They do however conduct regular seat belt checks at Queen. By regular I mean only during the fair weather months on really nice days. Fun fact: people only don't buckle up in nice weather.....or maybe the Police won't stand in inclement weather.........I don't know; but it's one of those two things.

I'm confused, why are they designing a left-side bike-lane for Herkimer? That seems unexpected and unnecessary.

1. right hand lanes as originally planned require cyclists to cross all lanes of herkimer before queen, in order to cross queen, and then cross herkimer again to get back to the right hand side afterwards.
2. most cyclists who want to turn south from Herkimer would likely be on the contra flow bike lane on stanley already. So most eastbound cyclists will be turning left from herkimer. So after having crossed herkimer twice, they would likely have to cross a third time in order to turn left.

Yes - not the typical 'slow moving traffic keep right' approach, but as mentioned below, keeping the Herkimer lanes on the left simplifies the Queen/Herkimer intersection and makes left-hand turns towards downtown much safer for both cyclists and cars.

I think that is to avoid possible collisions with cars turning right onto Queen. Also, with the bike lane on the left it can cross Queen without having to contend with the Northbound traffic. There could be another explanation but at first glance that seems to be a couple of fairly good reasons.

Because many of the cyclists who will be using the lane will want to travel northbound off of Herkimer. Placing the lane on the left eliminates the need to take your life in your hands crossing against speeding (as in really speeding) rush hour traffic.

Thank you for the update, and the work that DNA and their cycling committee is putting into this.

Charlton and Herkimer are both problematic as currently designed, and I think the committee’s design would work well to make both much safer. I had been told by the traffic engineering department last summer that there was a design, to be implemented Spring 2015, that would narrow Charlton to decrease crossing distances at Charlton/Dundurn, and traffic speeds. The Kirkendall neighbourhood has identified that stretch and that intersection as an issue for many years. There was sort of an implication that this was going to be a part of other changes to Charlton and Herkimer both. That might be incorrect, though, as their original plan had bike lanes on Charlton only east of Locke).

Anyway, staff don’t seem to move quickly and I’m sorry to hear that you’ve been finding them a bit hard to pin down. But thank you again for this work: it’s important for everyone on and around these streets, whether they bicycle or not. It’s too bad that Dundurn’s bike lanes are configured as they are, with zero protection. The more lanes that are properly designed, the better.

So is Queensdale getting that end-to-end bike-lane that Jackson veto'd a few years back?

It's really frustrating that we're even talking about one-way bike lanes on these two streets instead of a continuous, separated two-way cycle track on Charlton running east to Walnut and connecting to the Escarpment Rail Trail.

That's a pretty loaded statement. A 2-way cycle track on Charlton would have its merits, but would also present challenges as we are already dealing with street width limitations for 1 lane (particularly west of Queen). Not to mention that putting everything on Charlton would mean no broader benefits for pedestrians and traffic calming on Herkimer.

That said, I'd love to see the Herkimer lane connect to James with clear wayfinding to continue Eastbound on Charlton (where Charlton becomes 2 way) all the way to the Rail Trail.

OK, that statement was a bit histrionic, as well as devoid of the on-the-ground experience that comes from living in a neighbourhood. I'll retract it. I stand by my larger point about connectivity to the east, which could be provided in the way you describe,

Thanks John - the point about connecting to the rail trail in the east is an excellent one. Sadly, this is not within the scope of what the city is considering right now...but it definitely should be!!

Thank you, Kyle. Your hard work is appreciated.