Eyes on the Street: Traffic Calming at Locke and Stanley

The foundation of good urbanism is a willingness to carefully observe city life in order to understand how we can make it better.

I was inspired by a short photo essay that RTH contributor Kevin Love just sent me, which he titled, "Eyes On The Street". That expression, of course, was made famous by the late Jane Jacobs, whose revolutionary approach to urban studies arguably founded modern urbanism.

In her seminal book The Death and Life of Great American Cities, Jacobs used the expression "eyes upon the street" to refer to the feeling of safety that comes from being in a shared public space. To create safe public spaces, Jacobs wrote:

First, there must be a clear demarcation between what is public space and what is private space. Public and private spaces cannot ooze into each other as they do typically in suburban settings or in projects.

Second, there must be eyes upon the street [emphasis added], eyes belonging to those we might call the natural proprietors of the street. The buildings on a street equipped to handle strangers and to insure the safety of both residents and strangers, must be oriented to the street. They cannot turn their backs or blank sides on it and leave it blind.

And third, the sidewalk must have users on it fairly continuously, both to add to the number of effective eyes on the street and to induce the people in buildings along the street to watch the sidewalks in sufficient numbers. Nobody enjoys sitting on a stoop or looking out a window at an empty street. Almost nobody does such a thing. Large numbers of people entertain themselves, off and on, by watching street activity.

Of course, in the context of Jacobs' life the expression "eyes on the street" takes on another level of meaning: Jacobs demonstrated throughout her remarkable life that it is by carefully observing daily life in a community that we can best understand how communities work and how we can make them work better.

In my own modest efforts to observe and understand how Hamilton works, I am merely standing on the shoulders of giants like Jacobs. Even so, I constantly find myself having to go back to the basics - often during times of deep frustration with the city's political dynamics.

Receiving Kevin's piece was one of those moments: he was in a public space, he noticed something interesting, and he shared it. I hope that Eyes On The Street turns into a new feature on Raise the Hammer, and encourage urban observers to consider contributing your observations of interesting developments.

Toward that end, here's my submission. Last week, an alert RTH reader let me know that the City had installed new traffic calming bumpouts at the intersection of Locke Street South and Stanley Avenue.

I swung by and took the following photos of the new bumpouts, which are marked by white paint and knockdown bollards. 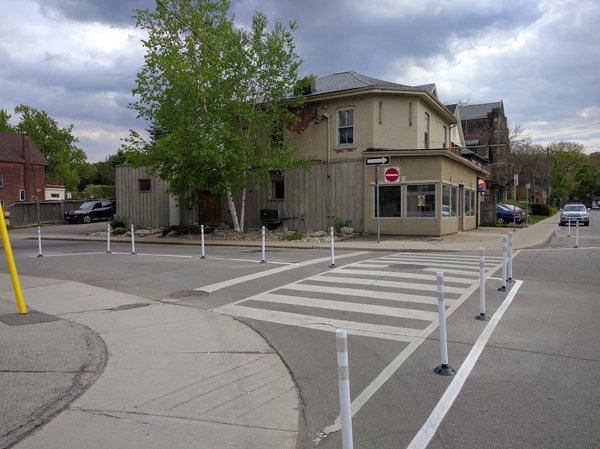 Looking south at Stanley from Locke 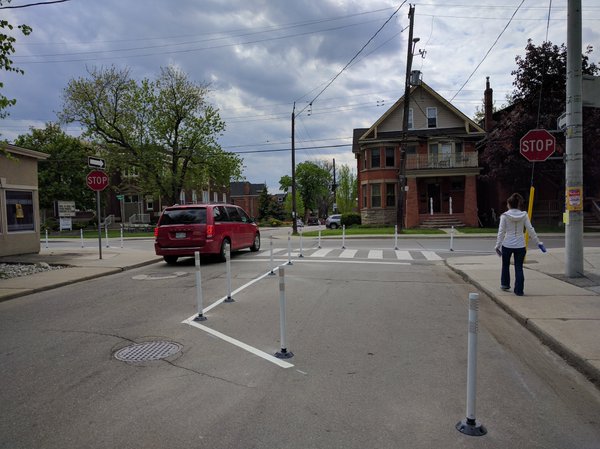 Looking west at Locke from Stanley 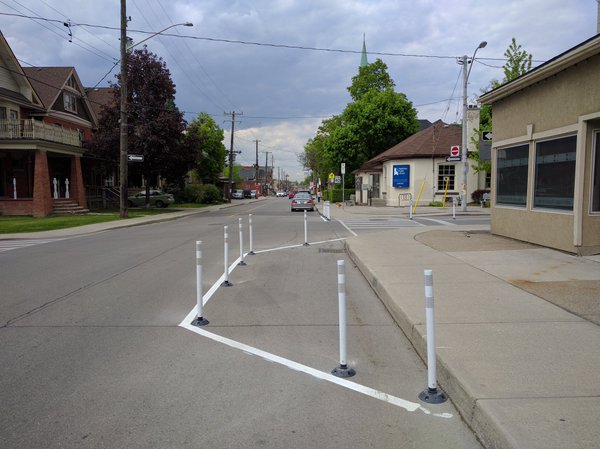 Looking north at Stanley from Locke

These kinds of interventions are great forms of tactical urbanism: they're cheap and easy to install and iterate and deliver a big return on investment in improved quality of life.

I'm assuming the 2 stripes on the top of the bollards are nighttime reflectors?

I walk past this intersection every morning with my son and it is a defn improvement. It was common to have two cars pulling out of Stanley in parallel - usually one shooting across to rat run with too many moving targets to track. Crossing Stanley now is much easier.

If this is an example of good urbanism then urbanism sucks.

Functionally, it is good urbanism.

Aesthetically, it is ugly and needs to be a bumpout island.

......that RTH contributor Kevin Love just sent me. How? somebody told somebody that you don't let people know if you are going to put something on the site, or maybe sent to wrong place? Tell everybody how.

there's a contact link right down there at the bottom. you've heard of email right