There's nothing like following a creek upstream through a traditional neighbourhood to make you fall in love with your city all over again.

One evening this week I found myself in downtown Dundas with an hour to kill, so I decided to wander around a bit.

Not really knowing where else to go, I started at the edge of downtown where King Street West turns into Cootes Drive. This is the spot where a pedestrian died last November after being struck by a car while crossing Cootes in front of the McDonald's between York Street and West Street. 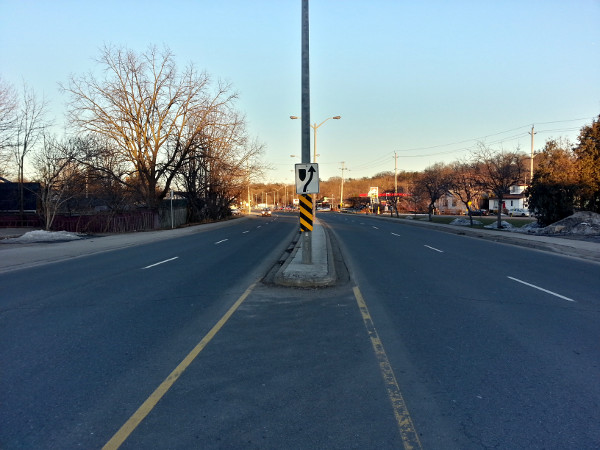 When I wrote about the incident last year, I set aside the question of who was "at fault" for the collision and focused on the inherently problematic context in which an 80 km/h, four-lane divided highway transitions into a two-lane urban street over a couple of blocks.

Standing and walking around there really drove the point home for me. It's a mishmash of incompatible design elements. A divided highway feeds velocitized drivers operating fast automobiles into a dense, mixed, multi-modal environment with one lane in each direction, curbside parking and urban storefronts on both sides. The adjacent side streets are traditional prewar residential. 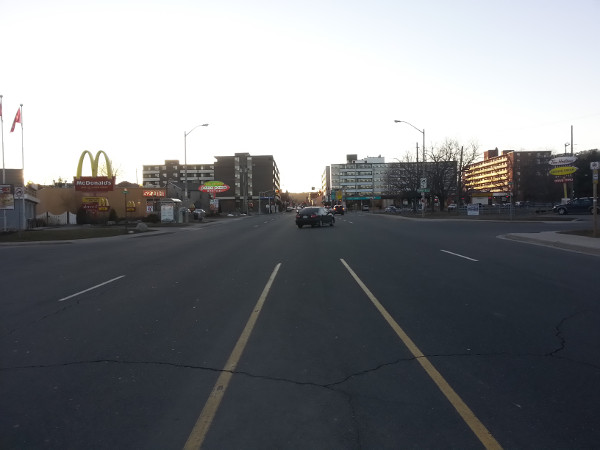 In front of the plaza on the north side of Cootes between York Road and King Street East is the York Road Parkette, a cute little wedge of green space with shade trees, picnic tables, benches and a rectangular gazebo.

It also has a little creek running through it, which I hadn't really noticed before. What started out as an ominous pilgrimage to the site of a recent fatality was about to turn into a more uplifting adventure. 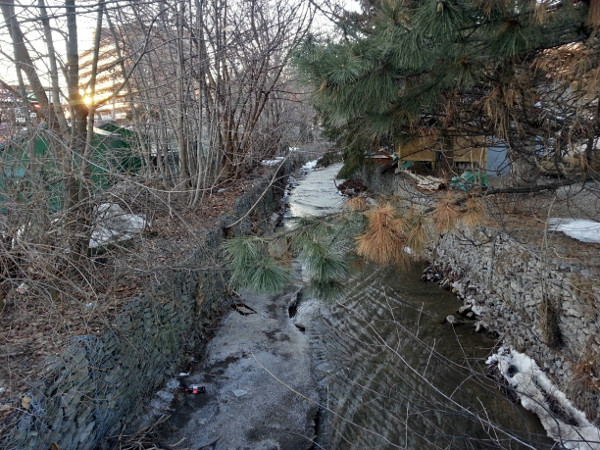 Held in place with gabion baskets, the little creek runs downtstream from northwest to southeast and disappears under Cootes at King Street East.

As far as I can tell, it's called Sydenham Creek. The Hamilton Conservation Authority has a 2009 Stewardship Action Plan [PDF] that describes the creek and its three catchment basins through which the creek flows from its headwaters just south of Highway 5 to its final destination in Cootes Paradise south of Dundas Street. 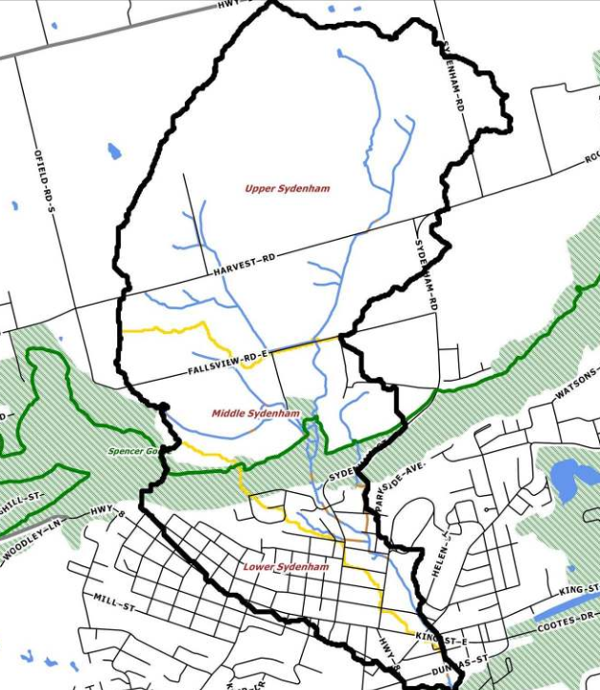 What really impressed me about the creek is that so much of it is daylighted rather than hidden underground in a drainage system. For the most part, the only places it goes underground are when it crosses streets through culverts.

I decided to follow it upstream to see how far it goes. 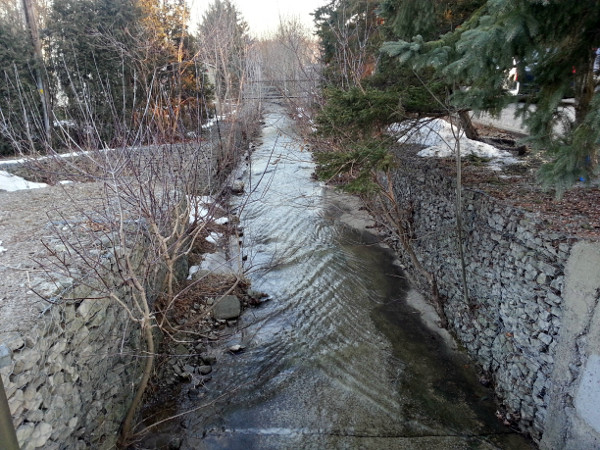 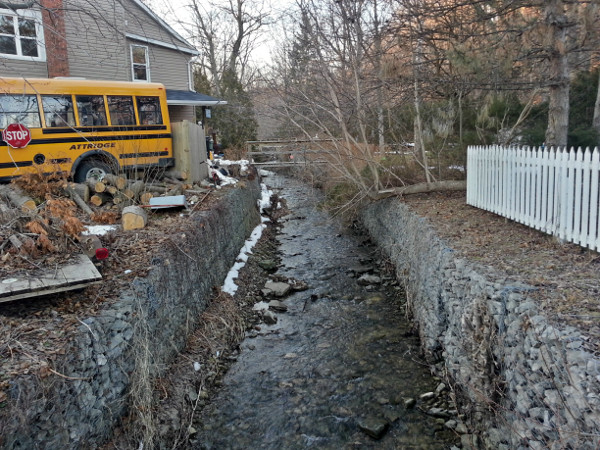 I continued east on Park to Carriage Lane, which is a private lane with some infill townhouses on the west side. I could see the creek pass by just north of the houses but couldn't get close enough for a good photo.

I went back down to Park and then turned right onto Cross to head north. The creek crosses Cross a little south of Alma Street, at the entrance to Dundas Driving Park. 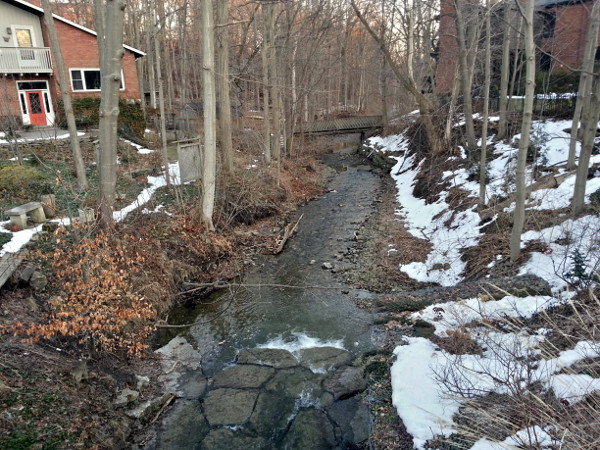 As you can see, the creek is more naturalized here without gabion baskets to hold the banks.

That said, the culvert on the west side of Cross is impressive: it actually runs underneath someone's driveway. 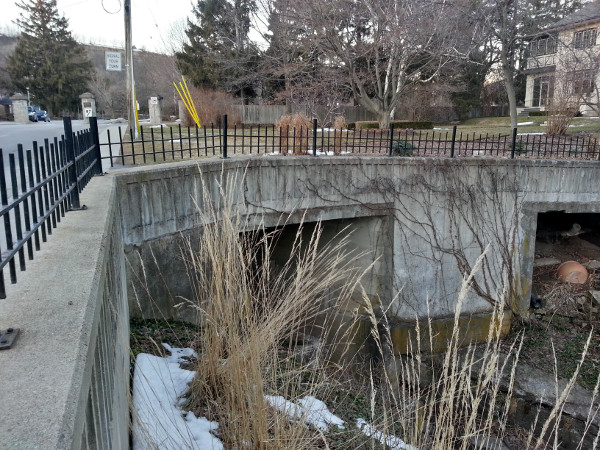 Sydenham Creek looking upstream under the culvert at Cross Street

East of Cross, the creek runs along the south side of Alma Street before crossing it and jogging northward. 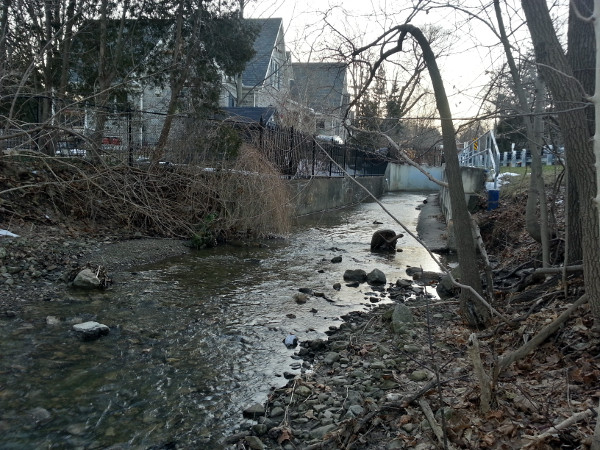 Sydenham Creek looking upstream along the south side of Alma Street 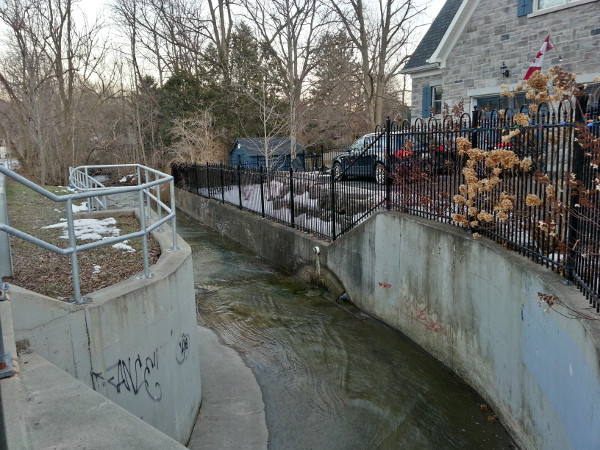 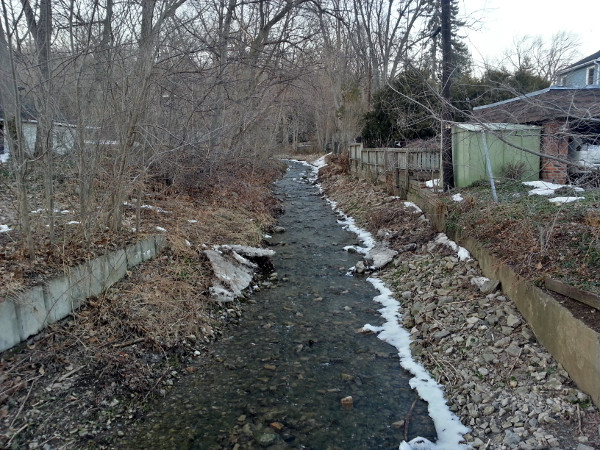 Sydenham Creek looking upstream from the north side of Alma Street

In retrospect, from looking at the map I could have headed up Parkside Avenue and turned left on Rolph Street to catch another glimpse of the creek. However, I ended up continuing along Alma to Sydenham Road, where the creek crosses just south of Cayley Street. 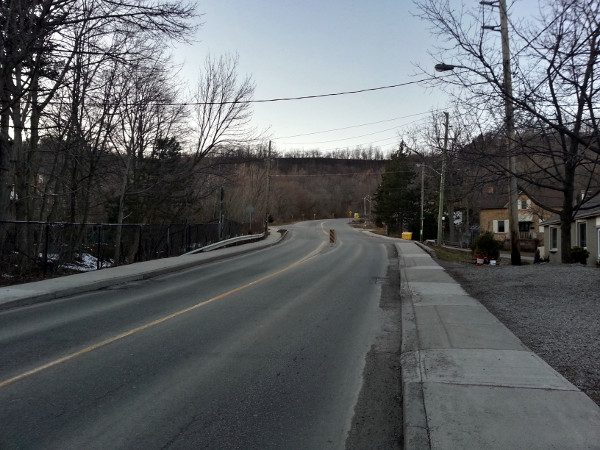 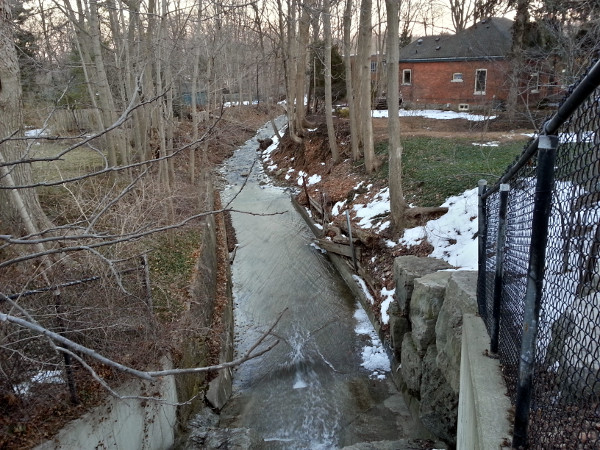 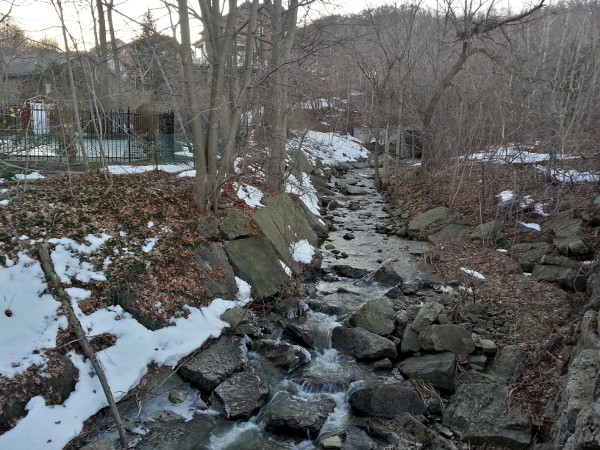 Onwards and upwards. I crossed Sydenham and walked up to Livingstone Drive, which the creek crosses just east of Sydenham. 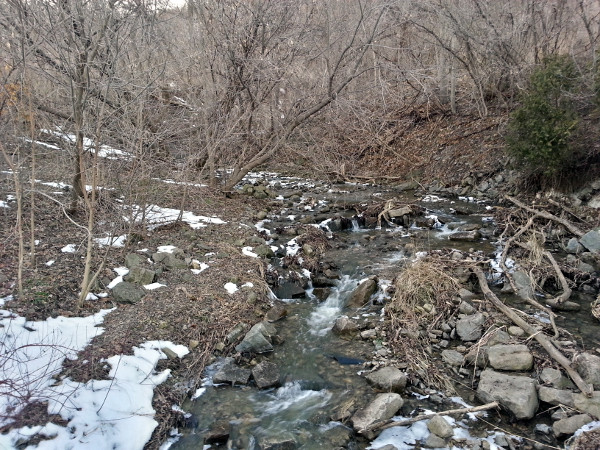 From there I cut back to Sydenham and continued uphill. Just as Sydenham bends to the northeast, a walkway on the west side winds up to Sydenham Falls.

The trail includes a very cute wooden bridge across the creek. It allows for a fun view of the Falls, which run under the elevated railway bridge. 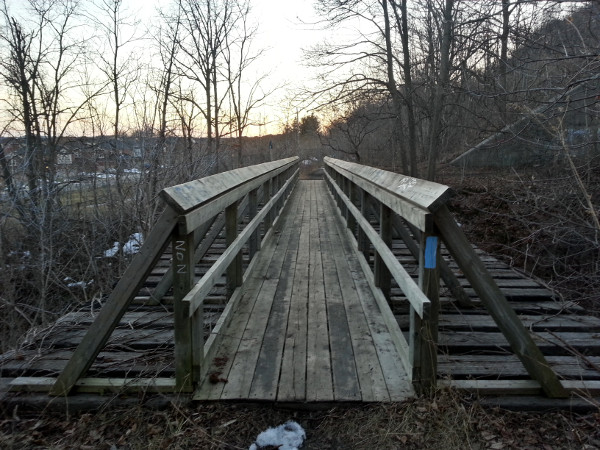 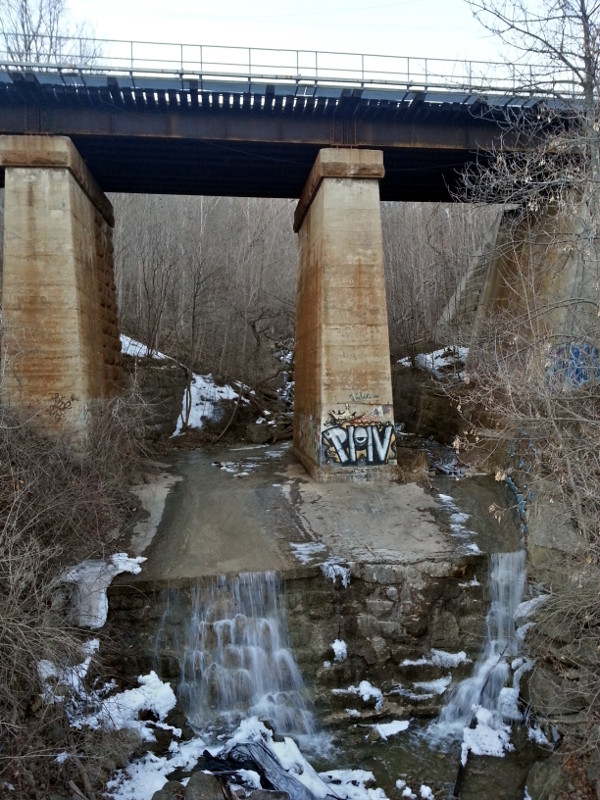 I tried to get farther up to get a better view of the falls north of the rail bridge, but the path was still pretty icy and I wasn't really equipped for hiking. Also, I only had an hour to spare.

I'll definitely have to come back when the weather gets better and I have more time to explore farther upstream.

Here is a map from Google Maps of the creek path I followed from Cootes Drive, bottom right, to Sydenham Falls, top left: 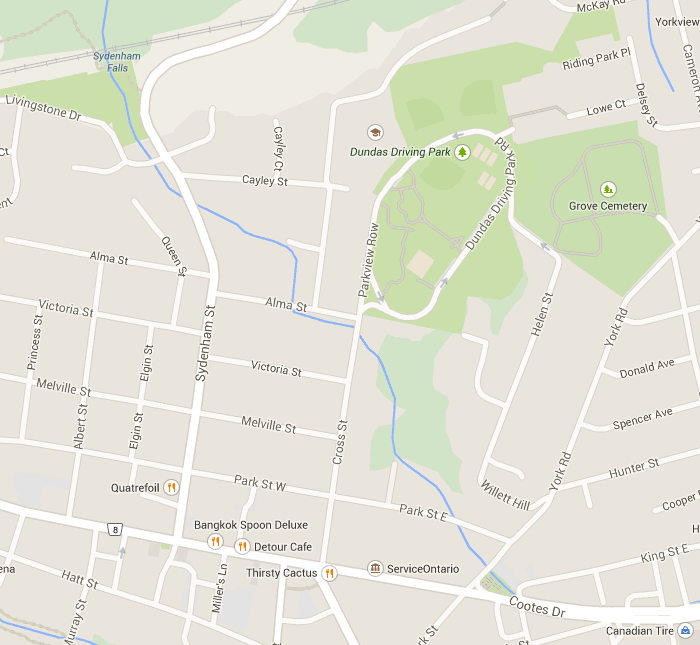 According to the map, the trail I was on continues west to connect with the Bruce Trail. Along the way it joins a switchback to the Webster's Falls Side Trail, which links Dundas Peak, Webster's Falls, Tew Falls and Spencer Creek.

Reluctantly, I turned back and headed back down Sydenham. 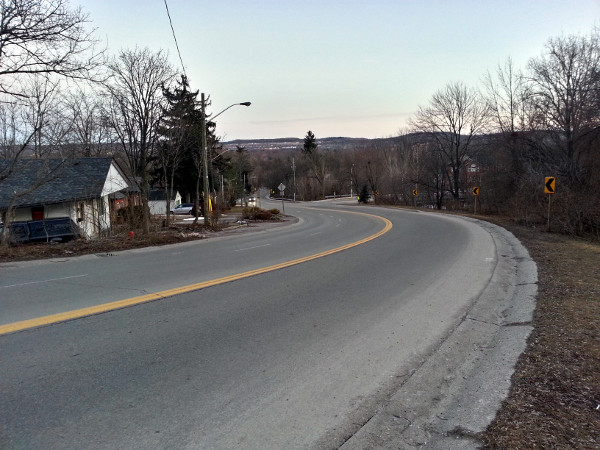 Looking down Sydenham Road from near the falls 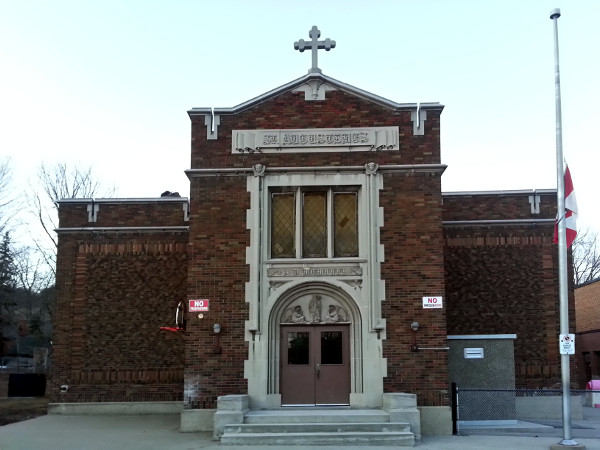 Of course, I couldn't leave without taking a moment to catch a photo of the all-way zebra crosswalk at Sydenham and Alma, outside the school. I imagine this intersection is pretty hair-raising during morning rush hour, when children are crossing to get to school and people in cars are zooming down Sydenham on their way to work. I don't envy that crossing guard. 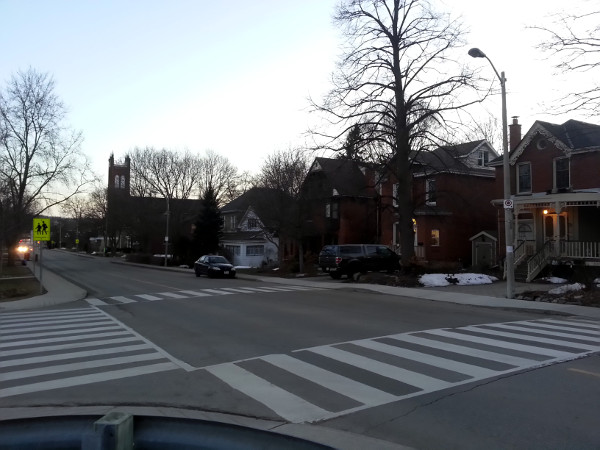 The past few months have been pretty discouraging. Between the bus lane vote, the LRT-killing transit strategy, the too-little-too-late Integrity Commissioner's report, the ongoing struggles to calm traffic and make safer space for walking and cycling, and the recent parade of cringe-inducing political comments, it has been a challenge to stay optimistic about this city's prospects under its current leadership.

Yet Hamilton really is an amazing city, filled with little wonders and unexpected treasures. As the deep freeze of February recedes into the past, it's vitally important to get out and keep exploring this endlessly explorable community.

There's nothing like following a creek upstream through a traditional neighbourhood into the Niagara Escarpment to make you fall in love with your city all over again.

I did a very similar investigative walk 20 years ago going the other direction from the same point you started from, Ryan. It was part of a 4th-year Civil Engineering hydrology project at McMaster, and we followed it south-east from the Tim's and around behind the Canadian Tire to emerge at Spencer Creek.

I agree about the feeling of discouraging times lately - thanks again for your wonderful work to keep us all inspired to push for a sustainable future in Hamilton.

I really enjoyed this piece Ryan. These patches of barely tamed wildness are really what makes Hamilton so unique. I loved reading along about your journey. Keep up the great work!

Ryan, I look forward to the next instalment. Thank you for this first one.

Thanks for the photo essay. We spent a lot of time in this creek and others growing up.

Some other neat ones are spencer creek, and the one in Ancaster that runs past the old mill (and used to power it).

Nice one, Ryan. (Don't get discouraged.)

My daughter and I made a similar journey in Winona about 11 years ago. I have no idea if the creek had a formal name, but it was as if Spring required the odyssey to find the source of the water. We didn't find the source, but it was fun (more for me than for her, I'm sure :)

Great shots Ryan. Dundas does have a good overall vibe in large part due to the commitment of most of its residents. A few blunders, yes, but Dundas was built 'up' from the waterways there.

Hey Ryan, the mistakes that put all those channel straightening gabion baskets are the same as the political impediments obstructing the natural flow of public transit in the city. There is a lot of good that needs to be done in the city, and I'm sure certain individuals at the Conservation Authority would share your feelings of discouragement after seeing the photos you took.

Do you see the connection here? The same notions of moving people as quickly in and out of the city are the same that have carved out the meander pattern of the creek - riffles and pools - into a monotonous waterway.

We have a lot of work to do, on the streets and in the streams of Hamilton.