Britannia would make an excellent neighbourhood greenway, and Cannon should extend the cycle track east past Sherman.

While on a bike ride to snap a few photos for Kevin Love's article on Barton Street, I rode out to Red Hill Valley and then came back west along Britannia Avenue. It struck me, and not for the first time, that Britannia would make a fantastic neighbourhood greenway. 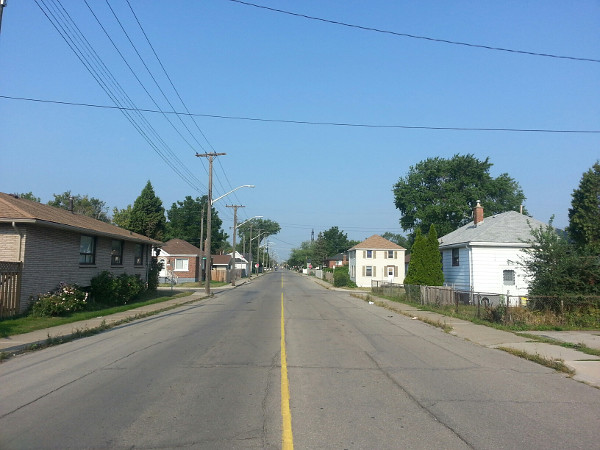 On a neighbourhood greenway, speed humps, speed tables, chicanes, bumpouts and other traffic-calming measures signal to people in cars that they need to slow down. Pavement markings and signs alert everyone that the street is intended for use by people on foot and on bike.

Cross-streets have diverters and other traffic buffers installed to redirect automobile traffic off the greenway while allowing walking and cycling traffic to proceed.

The City of Portland has been building neighbourhood greenways for years, but other cities, like Seattle, Vancouver and Chicago are also investing significant resources in building these successful cycling routes.

Britannia looks like an excellent candidate for this treatment. It is a longish street, running a little over three kilometres through a heavily residential area and providing excellent cycling connections on both ends and along its length.

On the east, Britannia connects with a path to Heath Street, Hillcrest Park and the Red Hill Valley Trail. Heading west, it intersects the Pipeline Trail at Andrew Warburton Memorial Park, where Cannon Street East splits off. 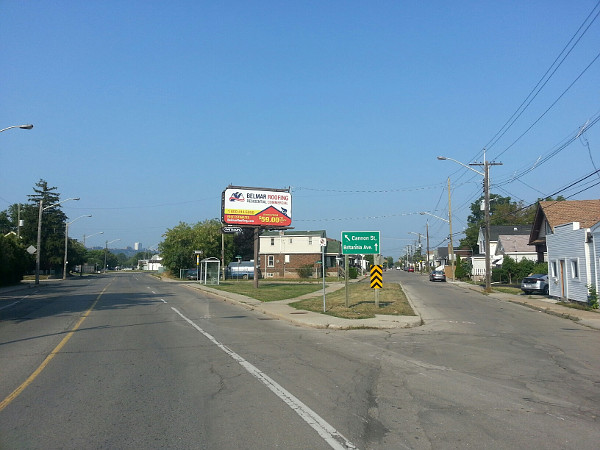 Britannia is interrupted by a parkette at Park Row North, a structure that already acts as a diverter for automobile traffic while allowing walking and bicycle traffic to proceed.

Its western terminus stops at Ottawa Street, a lively commercial centre with lots of destinations in close walkable proximity.

Britannia is a wide street but has very little automobile traffic. I was riding on it in the middle of a weekday and there were almost no cars at all.

Of course, a few things will have to change to make Britannia a successful greenway.

The intersection at Parkdale is discontinuous, with the eastern leg crossing Parkdale slightly to the north of the western leg. Some kind of signalized intersection will be needed here.

Fortunately, the intersection at Kenilworth is already signalized. However, the street inexplicably becomes one-way westbound between Kenilworth and Park Row, even though it is wide enough for two-way traffic. This section will need to be converted back to two-way, at least for bicycles.

Cannon Starts at Britannia four blocks east of Kenilworth, branching out in a Y and then proceeding along a parallel course all the way west through downtown to where it merges with York Boulevard at Hess Street.

The City has a three-kilometre protected two-way cycle track on Cannon between Hess and Sherman Avenue, but things get sketchy east of Sherman. I wrote last year about the fragmentary painted lanes on Cannon once you get east of Sherman - a huge, forehead-slapping missed opportunity to extend the protected cycle track on a street with extremely low automobile traffic volumes.

Astonishingly, the City did a lot of road work on Cannon during construction of the new stadium and had a perfect opportuntiy to extend the cycle track. Instead we got - literally nothing for the first few blocks immediately east of Sherman! 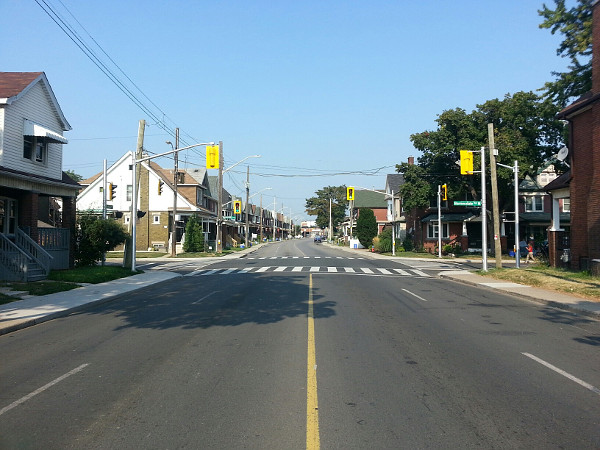 The south curb lane (the one on the left in the above photo) would be a perfect space to extend the protected cycle track. Instead, it's painted as a designated right-turn lane. You can't even make this stuff up. 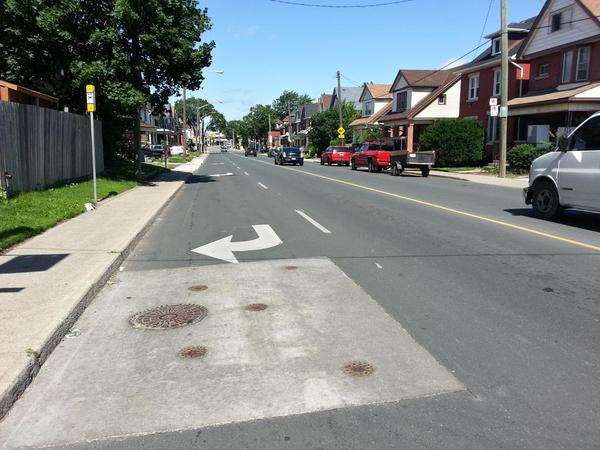 Starting at Lottridge, we get bare-minimum painted lanes for a few blocks, and then the lanes disappear again at Gage. After that point, the City has been kind enough to paint bike sharrows, markings to remind drivers that cyclists are also allowed to ride in mixed traffic.

Of course, hardly anyone is actually willing to ride a bike in mixed traffic, especially on a street that is so wide and has such low traffic volumes that speeding is easy and comfortable. That's why we need cycling infrastructure in the first place!

There is apparently a plan in the works to extend painted bike lanes on Cannon from Gage to Britannia, but there is no reason why the entire run from Sherman to Britannia can't be upgraded from painted lanes to protected lanes.

It is laughable to suggest that this street somehow cannot afford to lose automobile lane capacity in order to dedicate a lane for a protected cycle track. 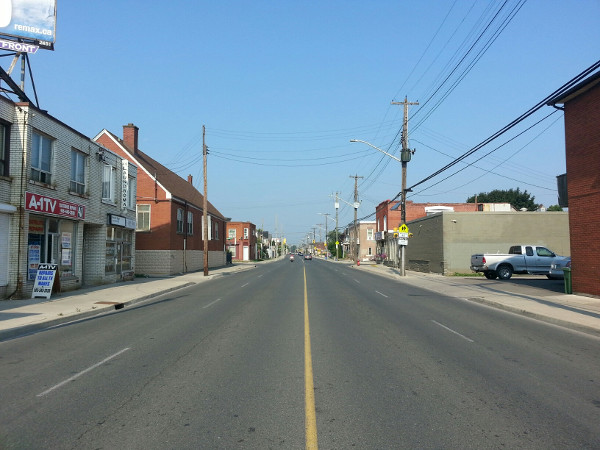 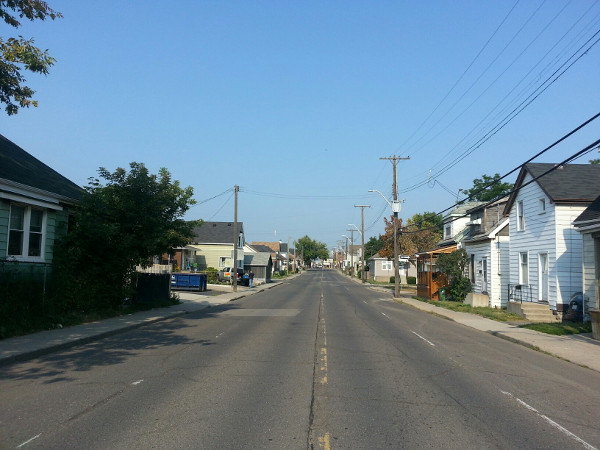 The cycle track on Cannon west of Sherman, where there actually is a moderate volume of automobile traffic, has had the effect of reducing the incidence of dangerously fast speeding while still allowing traffic to flow at a comfortable, reasonable speed.

But left to its own devices, the City has failed to be inspired by the cycle track, which was designed by an outside company after a huge citizen campaign motivated Council to approve it.

We should not have to run a huge campaign every time we want high-quality cycling infrastructure. That's not a sustainable model for citizen engagement and there is simply no reason why the City can't just do it right if they're doing it anyway.

It would 'behoove' you to stop telling others how they should talk about these issues.

It just is: uber creeps like downtown and brassington make me ill.

I'll take the original version, thanks.

At least for this section of Cannon near the stadium -- this is a big, big, good excuse to make it a cycle track rather than a painted line, without needing a citizen campaign.

Sherman is not very far from the stadium. so we can't wimp out with just painted lines for that last few blocks. It's just not as safe for kids that way.

Those are great points. I think that the city should look at expanding this into something like:

It's a good point and something I'll be bringing up at the next planning meeting for our neighbourhood. 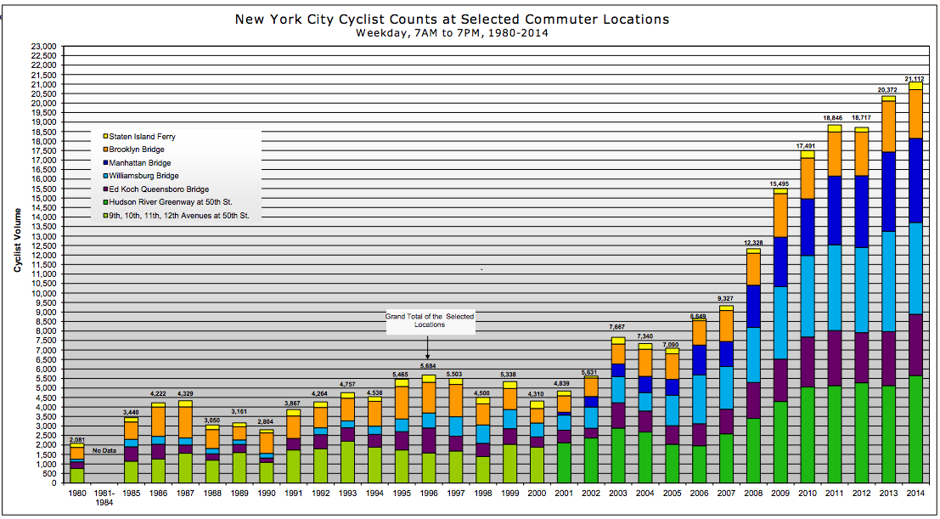 Apparently, the credit link I was trying to insert, apparently didn't get in the above post: http://www.citylab.com/commute/2015/04/t... This is where I got the image from.

The cycling boom in New York City has been phenomenal in the last 10 years. I wonder if City of Hamilton is collecting enough annual bike data for this city to be able to create graphs like the above.

I continue to collect bike traffic data (via video) at a specific location (Cannon and Wentworth). BTW, whenever I drive near the Cannon & Wentworth (or walk or bike near the area), and have spare time, I park to collect a 10-minute video. Right now I have about 5 roadside videos of nearly the same roadside spot at Cannon (10 mins long each, at different times in the last few weeks). For Cannon road surface allocation the most recent video during a weather threat (rain) achieved a not-bad bike ratio of approximately ~0.15 (equality: 0.33; since the road surface is 3:1 allocation car:bike) after 7pm September 2nd where there was a scant 52 cars and 7 bikes crossing an exact point of Cannon near Wentworth over a 10 minute time period. The 1-to-1.5-minute dead silence on Cannon between stoplight cycles between the car platoon surges, definitely keeps the car count down lower than an automobile driver would think. I observed at least 5+ other bikes that went into the video scene but did not cross the crossing point I was focussing on. If I counted all visible moving cars/bikes in the visible frame, the bike ratio dramatically improves, since many bikes turn onto/off the Cannon lanes at Wentworth, and the bike ratio (bikes:cars) is higher in different parts of the video frame! I additionally make the observation that many cars drive a larger length of Cannon, while many bikes ride for a span of fewer blocks, including bike that turned before crossing the crossing point in my video, so the bike ratio may actually be more favorable than it really is, because of the different use patterns.

Still think Dunsmure could be the ultimate east / west neighbourhood greenway for the east end... very few residences facing the street and a cut thru dud due to four way stop overkill. Give pedestrians and bikes east / west right of way and, voila, you're done (you could go further of course).
Now, what are the options for the west end?

I like Dunsmure, a street I live practically next to. It's my main bike route to Gage Park from my home.

One problem with using Dunsmure as a bike route is all the stop signs -- almost every single block (The Idaho Stop Rule would be nice to have here: Legalized slow roll through empty stop signs with your head on a swivel) That said, it is very traffic-tamed residential route that is out of the way of the Main/King biking diciness, without having to go too far north/south.

Also -- for something simpler further south -- we need at least simple white lines painted on Delaware, just like on Stinson. The road is wide enough to hold parking, but parking is not allowed on Delaware. As an ultrawide 2-lane residential road (it can fit 3-4 lanes) it would easily handle a painted bike lane without protest (no parking loss, no traffic lane loss). The Delaware-Stinson-Hunter is a relatively popular crosstown bike route for SoBi users, and that's how I bike my SoBi to the Hamilton downtown GO station. Stinson and Hunter has (partially flawed) bike markings, but Delaware doesn't have any. It also needs a road stripe at the stop signs (there's no paint at all on these roads!!) as a lot of cars overshoot the stop signs and enroach a bit into Delaware, occasionally almost colliding with a bicyclist going poast. With simple white bike line paint on Delaware and a "stop line" on the road at stop signs, both the kids & cars will behave better.

West end already has the rail trail, which connects to Dundas and beyond. It's inherently protected, being a former train line, does not really interfere with road traffic, and is relatively safe during the day (lighting and cutting back of the brush could be better, as could getting the bike cops to patrol it from time to time).

Why do you pretend? What's your real name? Write an article with your name on it, downtown.