It would take only a very minimal change to move the bollards at the start of the bumpout so there is room for a person on a bike to ride behind them.

Early yesterday morning, I noticed that the knockdown bollards on Bay Street South around Bold Street had been removed. 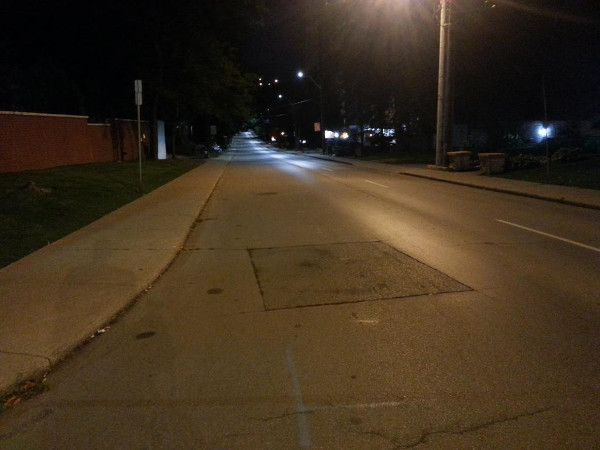 I contacted Kelly Anderson, communications manager for the Public Works Department, and quickly received a response: the knockdown sticks had been removed temporarily so that Horizon Utilities could replace a hydro pole on Bay Street. 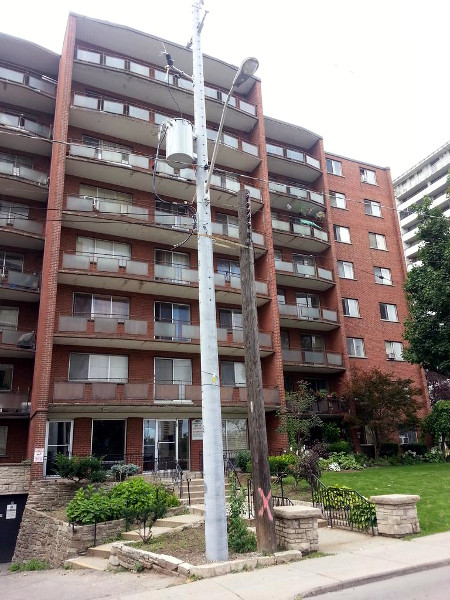 I asked if there was any chance that the City could reinstall the knockdown sticks in such a way as to make it easier for people on bicycles to ride behind them and enjoy some physical protection from automobile traffic. Anderson responded, "I've passed your suggestion/request on to Traffic staff for consideration."

So naturally, the knockdown sticks were reinstalled the same as before, making it difficult to navigate a bicycle behind them. 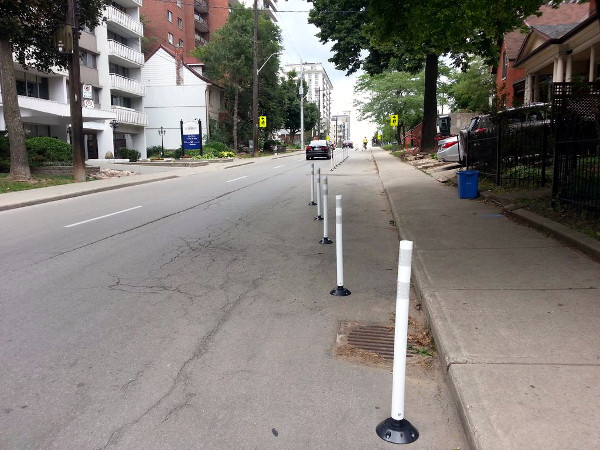 Knockdown bollards reinstalled south of Bay: no easy way for cyclists to ride behind them

Just as I was taking these photos, a man on a bicycle came up Bay. When he got to the start of the knockdown sticks, he had to pull out to the left and continue to ride in the mixed traffic lane before pulling behind the bollards farther up. 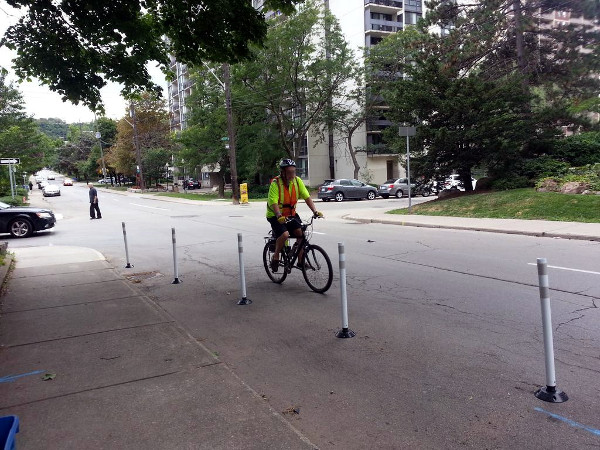 Cyclist riding in mixed traffic next to knockdown sticks

The same pattern is followed in the section of bollards just past the apartment building parking garage ramp: 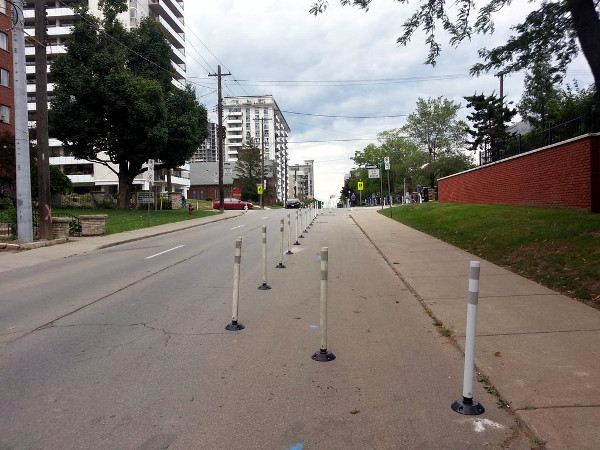 Bollards between the parking garage ramp and Bold Street

It would take only a very minimal change to move the bollards at the start of the bumpout so there is room for a person on a bike to ride behind them. This is an easy missed opportunity to make a sliver of Bay Street more accessible by bicycle. 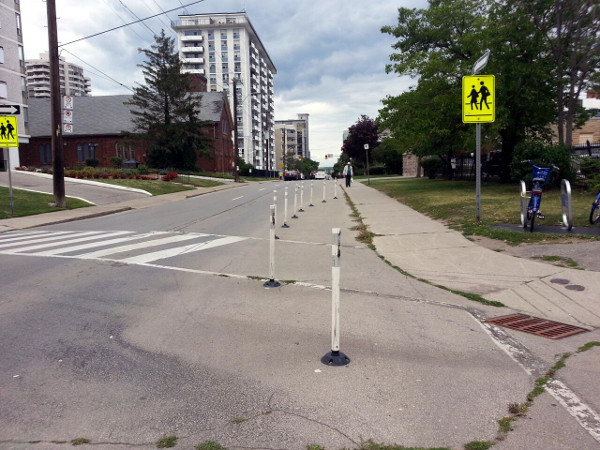 The knockdown sticks were originally installed in late 2013 as part of that year's new program to address the enormous backlog of long-neglected street and intersection safety improvements. A year later, the City's Cycling Committee sought feedback on making the bumpouts permanent, but it is not clear whether anything came of this.

Bay Street is a contender for the least essential one-way street in Hamilton: a wide, low-volume street with dangerously high vehicle speeds. The only reason it is one-way is that it is nominally "paired" with Queen Street, which is one-way southbound.

There is absolutely no reason why Bay can't be converted to two-way with a protected cycle track.

Immediately north of Main Street, Bay is so overbuilt that a lane has literally been painted away instead of being used to improve cycling access downtown: 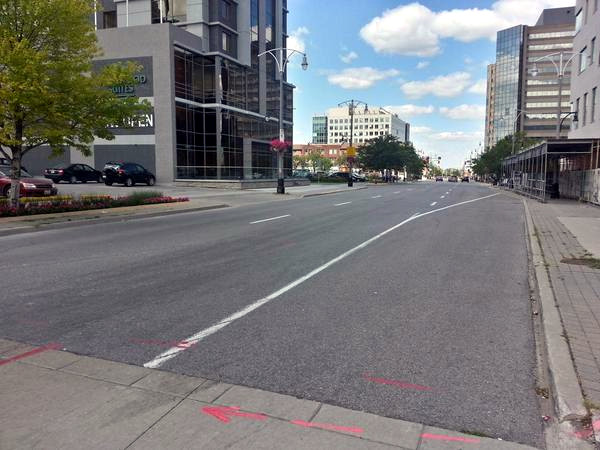 Imagine the benefits and synergies if Bay was converted to two-way and given a protected cycle track:

This is very low-hanging fruit, folks. If Council and staff can't even see fit to design and implement something this easy on a street this accommodating, I really don't know how we're ever going to pull off more challenging projects!

At the Hamilton Cycling Committee meeting on Wednesday, August 5, it was announced by Daryl Bender that redesigning Bay Street was nominated as Hamilton’s candidate for the pot of provincial cycling money.

So things are in the works for Bay Street!

fantastic news. Bay St could truly be great, with protected bike lanes both directions. It's ultra wide and doesn't need to be as evidenced by the 1 driving lane each direction north of Cannon and 2 high speed freeway lanes south of Main.

I agree with all your comments on the missed opportunities here but want to ask another question:
Why do the new poles Horizon is installing everywhere need to be so insipidly ugly? There must be better options.

Another question: why in the 21st century do we still have above ground electricity and telephone wires downtown? Every new subdivision has below ground power ... when will the utility companies finally put the wires underground?

This would reduce maintenance, make it easier to maintain healthy street trees and eliminate the problem of downed power lines. And it would also make the streets more attractive!

The area with below-ground wires downtown is tiny!

Below ground wires are more expensive to implement and maintain. The Google consensus seems to be about 5 to 10x the cost of above ground.

Then why are they installed in new subdivisions and in most downtowns (and everywhere in the urban areas of developed countries other than the US and Canada)?

If the cost differential were really that high and there were no off-setting lower maintenance costs it just would not be done except in downtown cores.

And, according the the wikipedia entry:

"Undergrounding can increase the initial costs of electric power transmission and distribution but may decrease operational costs over the lifetime of the cables."

The same article points out that other countries have a policy of under grounding existing low and medium voltage lines.

I suspect it is more a case of wanting to save money short term and not caring so much about long-term savings and better service to consumers.

I would assume that since a new subdivision is already dug up the cost of implementing would be greatly reduced. Obviously any power utility in an area that has underground cables did their research and determined that underground would be the best solution. And, if it was a better deal for them everywhere they would push to do it everywhere.

Years back, probably 20 years, I researched a bit about what it would take to bury the transmission lines along the Burlington waterfront (high voltage transmission - you know the ones I mean). I found that, yes, it would be prohibitively expensive and part of that expense is due to the fact that the lines need to be cooled if they are underground. I had no idea that this was necessary. Cooling is usually done by pumping cooled oil through the conduit.

I doubt the stepped down residential lines need to be cooled by the way, I just found that interesting.

I'd still be interested why they think it's worth doing in Europe but not in Canada, especially given generally more severe weather in Canada.

Under grounding was done as a matter of course in Europe many years ago (the only debate being whether the cost would be passed onto the customers). Maybe the government just decided that the cost was worth it and decided buried cables would be the regulated standard (just as standards for many things get raised over time) ... and in Canada they just don't care.

Certainly, high voltage lines are another matter in terms of complication ... but even those are buried in some locations.

It's also worth noting that the underground on most city streets in older areas is cluttered. Finding space for these conduits can be tricky business in a lot of cases. New subdivisions tend to have wider street cross-sections and roomy boulevards. It makes fitting everything in a lot easier.

There are, but they cost money.

There are several other places on Bay Street in the North end that have cycling-hostile knockdown sticks.

Here is one example.

On another note, the Knock down sticks on King St. in front of the Basilica of Christ the King are completely useless to cyclists. Why can't these be actual steel bollards? I don't have a lot of confidence cycling in those lanes when cars are hitting that curve at 60-80 km/hr even in good weather. The lack of signal for the ped/bike crossing also leads to an unreasonable level of danger for anyone attempting to cross and has to guess if cars are going to veer across 4 lanes and mow them down.

I biked there ONCE with my family and it was terrifying. I had the feeling that every car was driving right at me and if there was a patch of ice they likely would be. That curve absolutely needs some kind of concrete barrier. Someone is going to be killed there.

I used to ride that way several times a week. The bollards have helped a bit by eliminated the transport trucks that used to park illegally in the bike lanes so they could get a coffee at the gas station (I guess), but that crossing is still very dangerous.

Because of the curve, traffic is coming directly behind cyclists, many motorists change lanes without signalling at the last moment and they are already accelerating towards highway speeds.

As others have pointed out, having a freeway on ramp directly from a city street (instead of a normal right angle intersection) is not a good idea where there is an uncontrolled pedestrian and cycle crossing. The design treats King St itself as a sort of freeway with wide lanes, large turn radii and no traffic controls.

In the past month, I've seen two cars swerve through the sticks to get on or avoid getting on the highway there. I also watched a transport truck pull around them, taking a few down in the process. Plus there have been a few new mirrors and bumper parts littering the asphalt there, so clearly there have been other, more severe incidents. That crossing scares the crap out of me every day on my commute.

Wow...was on West 5th today near Mohawk College. Starting to look like a mini-401 with the rebuild taking place, despite low traffic volumes. Lane widths look to be 401 sized between Fennell and Mohawk.
Oh, and of course, zero cycling access.

What does your comment have to do with cycling opportunities on Bay street?

Also, what time was this? Sunday Morning, or Sunday Afternoon? Context means a lot. I can say the same about any number of our streets - regardless of size, capacity, or any of your other non-arguments.

Come by in a couple of weeks when school's back in session. We can do a check of a regular weekday morning - traffic going up and down the mountain, going into the HPH, Mohawk, Hillfield-Strathallan, the shopping areas, etc.

Also, was it just like driving on the highway with all the construction and stoplights?

oh, so now you're advocating for monster-wide streets because for a couple of rare hours per day they are needed. Yet you always use low usage in winter as a reason to oppose bike lanes.
Carry on....

Thanks for admitting you're out of your element, once again.

Look forward to 30 more articles about how we're doing it wrong but Portland is doing it right, or more stories about the farmer's market downtown, or how 2-way streets are some silver bullet for making our town the way you want it, rather than the way the majority want it.

It's not like cyclists are real human beings or anything...

seeing cyclists ride on the sidewalks on Concession now that the first portion of the rebuild is open. They wisely narrowed the parking lanes but decided to throw down several feet of orange concrete instead of bike lanes.