What has been your experience with the knockdown sticks at intersections along Bay Street South? What cycling accommodations would you like to see when concrete curbs are installed? 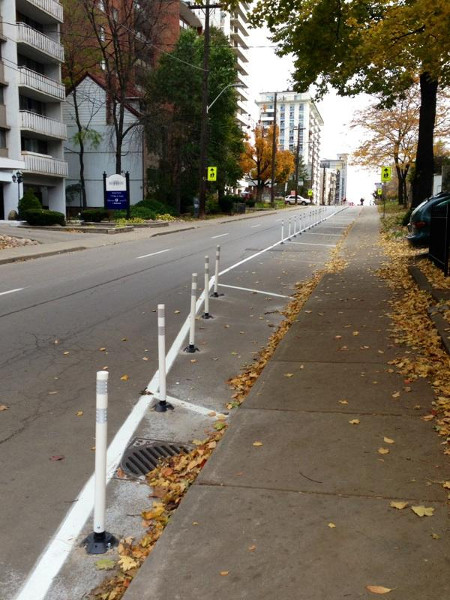 These knockdown sticks were installed as a pilot project in advance of concrete curbs to gather information on the potential effects of the concrete bump-outs on motorists, cyclists and pedestrians.

The bump-outs were designed primarily to shorten the distance across traffic lanes that pedestrians travel when moving through intersections along Bay Street.

Depending on who you ask, these knockdown sticks have been a blessing or a burden on cyclists moving through those same intersections.

Most of Bay Street from Markland to Strachan Streets is designated to have a future bike lane in Hamilton's Cycling Master Plan, Shifting Gears 2009.

Plans to replace the temporary knockdown sticks with concrete curbs have brought the city's attention to the way that such a move will affect cyclists on and around Bay Street South.

At a recent Hamilton Cycling Committee meeting, ideas were shared by committee members of their experience with the knockdown sticks at intersections along Bay Street and I'd like to bring this question to the wider cycling community.

Share your ideas as comments on this post and I'll forward the entire thread to the project manager for Alternative Transportation.

Dan Botham is a long-time Hamilton resident with an interest in advancing state of cycling in Hamilton. He is a member of the Hamilton Cycling Committee.

I'm actually against any new concrete on Bay simply because I still dream of Bay being converted two-way, and any concrete laid in Bay would be done with a 1-way plan in mind. 1-way Bay is one of the worst and most unnecessary wayfinding-obstructions in the city.

I could see Bay (and Hess, for that matter) as perfectly functional as a 2-way street with 1 lane in each direction and a bike shoulder on each side... but realistically, we'd get a TWINO with no bike lanes.

That's a very good point and true regarding wayfinding. Luckily my own typical paths of travel don't make it matter much.

I've never considered that knockdown stick area as a bike lane, I've always assumed it was a pedestrian bump out area. Funny enough though, recently I was riding along that stretch on my way to work and a driver yelled out to me to get in the bike lane. I caught up with them further down Bay St and let them know that it was not a bike lane.

I have mixed feelings on this based on some of the other responses. I think a bike lane would be good for that stretch, especially for the part between Hunter and Main St as it's challenging at times trying to get over into the centre lane if you want to continue through north on Bay St.

I think overall my preference would be to convert it to two ways first. Having Bay St as a two would would solve a huge navigation problem with trying to get to the south west end of downtown when you're down in the York St & Bay St area. It's such a pain from there having to either go up James to Hunter or taking Cannon St to Queen St. Having Bay St as a southward routing option would be incredibly useful. More useful to me I think than having a bike lane on there. If we could do both that would be amazing, but my preference would be having it as a two way street.

These comments so far have been quite insightful and constructive! Hopefully the city will give some serious consideration to these ideas. The city doesn't have a great track record of taking good advice from informed citizens when it comes to designing streets that work for cyclists but their last minute reconsideration of dangerous bike lanes on Herkimer and Charlton Streets gives me some hope that changes to Bay Street could be for the better.

Just a reminder: I will pass these comments along to city staff in about a week so feel free to speak your mind.

To better answer your question though, I don't think the curbing will have a huge change to what it is now for cyclists. I treat the knockdown sticks as a curb essentially as is, so having an actual curb there won't be much different.

For the past 5 years I’ve also ridden Bay St as part of my daily cycle commute from Duke St to York Blvd, I agree with Ryan that the current bump out area should be considered for bike lanes far ahead of installing permanent concrete bump outs.

Currently the knockdown sticks do force cyclists somewhat dangerously into the usually speeding morning traffic on Bay St as the lane narrows between Duke & Bold, compared to before. The intersection of Bay & Duke has proven dangerous for all road users during my years in the area so the all-around poor visibility there turning onto Bay St from Duke St likely comes into play.

Personally I'd prefer Bay St to be two-way, even if that meant no bike lanes, as I could take the same (quickest/least-amount-of-effort) route home without using the sidewalk and it would calm traffic for pedestrians as desired. Although there is certainly space on Bay St for two single automobile lanes running both north and south with bike lanes on either side.

I agree that these bump out sticks force you into traffic. And at the wrong time as you start to climb the grade (albeit small).

I agree with the comment about Bay needing to become two way street. I currently commute from Duke/McNab to King as well which is a easy 5 minute bike ride in the morning but the way back (legally) is either go up Caroline and then turn onto Bold which I then take to Park -> Robinson and then McNab and then back onto Duke; or go up York to James and then navigate the heavy speed light traffic at James up the Hill past the Go Station onto Duke.

Both of them are incredibly excessive returns back that just goes to demonstrate the remarkable inefficiency of One Way Streets in Hamilton.

I would like to echo the opinion that Bay St. really ought to become a two-way street, or at least have a two-way cycle track between Cannon and Hunter.

Moreover, although the new Cannon cycle track generally has a spectacular design, it ends with a massive fail at Hess, with no useful way to cross to the south side of York. (Hess remains pointlessly one-way northbound north of King, and the bicycle route west of Hess on Cannon requires cyclists to transfer to the north side of Cannon/York, from which it is a tall order to then cross York heading southbound.) Therefore it remains true that there is no safe westbound route across downtown between Barton and Hunter.

A two-way cycle track on Bay from Cannon to Hunter (at least) would neatly connect the Hunter and Cannon St. cycle tracks and also provide access to the Napier St/Victoria Park/Head St route to the King St. bridge over the 403. Because of the need to access Napier (or Market) to the west of Bay, the west side of the street would be the logical location for the cycle track.

I don't see why Bay couldn't have a two-way street design plus cycle track at least north of Hunter. This design would also improve wayfinding for motorists. At present Queen St. is the only useful southbound route for motorists between James and Dundurn. Two-way conversion of Bay St. would create much needed redundancy in our street network and reduce the number of automobile trips that involve pointless detours through residential neighbourhoods.

Thanks for opening the floor to feedback!

If you're passing this along to the city, the only feedback that I'd love to offer is this: if the city is going to build road space for cyclists, then clearly mark that space! Make it obvious, both to cyclists and drivers, that bikes will be in that space! I've seen it mentioned in the posts here already, but I didn't even know that this bumpout section on Bay was cyclist-friendly!

There's already enough confusion around where bikes should go on our roadways. If space is made for bikes, make it obvious: preferably with separated lanes, but at the very least with chevron road-paintings.

I've driven down Bay St. many times with cyclists on the far right hand side and they come to the bumpouts - some decide to cycle in the protected area (which hasn't been cleaned so it doesn't look like it should be used) while others continue to use the right hand (which is now the centre) lane and crawl up the hill toward Hunter. Yes, please make it obvious that cyclists can and should use these protected areas and run the street cleaner through them to make it a little more appealing.

Once again, this is a street that cries out for two way conversion and if treated according to its traffic volume may not even need bike lanes in the end.

The attitude within city hall is (and I quote): "we are frankly getting tired of hearing about all of this two way stuff" - and there is the problem. If they are tired of hearing about it, the obvious solution is to JUST GET IT DONE ALREADY. Instead they have chosen the path of ignoring and deferring, hoping it will go away (perhaps just waiting out retirement?)

I feel like these bumpouts located at streetcar stops along Roncesvalles in Toronto could be a good compromise here. Run the bike lanes through the bumpouts, then pedestrians can cross in stages. One would cross the bike lane to an island, then cross Bay St. from there.

Keep the bumpouts instead of concrete, with some gaps to enter and exit. It's a very useful slow lane that bikes need to climb the hill up to Hunter, where it seems traffic is otherwise in race to the light mode.

But I'm all for two way on Bay and many others!

Thanks for your comments, everyone. I have forwarded them all to the Project Manager for Alternative Transportation at the City.

This needs to change. The transportation department should cover all transportation needs. We've got who knows how many emoloyees making sure cars can speed everywhere all the time, and one person over all other modes? Proper cities like Vancouver and Portland have shifted their transpo departments to now prioritize walking cycling and transit while still overseeing auto projects. Hamilton really needs to do the same.