None of the claims of bus lane opponents stand up to scrutiny.

Hamilton City Council meets today at 5:00 PM to make a final decision on the fate of the beleaguered transit-only lane on King between Mary and Dundurn.

Ward 5 Councillor Chad Collins has been assembling a coalition of Councillors to kill the lane. Collins has made it clear that he believes killing the bus lane will also effectively kill Hamilton's light rail transit (LRT) plan.

None of these claims stand up to scrutiny.

According to the staff report on the bus lane, the average automobile delay during the busiest period - afternoon rush hour - is five minutes.

In addition, staff recommend making some changes to improve traffic flow for motorists, including advanced left signal for buses turning into the MacNab terminal and signal timing adjustments through International Village.

The money to pay for this is available in the Metrolinx Quick Wins capital budget provided by the Province to create the bus lane.

It's true that business response to the bus lane has been mixed, with some business owners supporting it and others opposed.

However, much of the opposition stems from the removal of north curbside parking on King west of Bay. As one owner put it, "I have customers who tried parking across the street and then risked their lives to cross the road and just said, 'we aren't coming back.'"

At the same time, the City has issued 30 licences for new businesses along the bus lane route, plus an additional 14 new business licences inside Jackson Square. Since not every business needs a licence to operate, these counts may understate the total number of new businesses.

The Hamilton Spectator just reported that Frisina Group plans to build a $50 million condo development on the site of the old Kresge building at King and Hughson.

Clearly the bus lane is not killing business downtown.

Traffic collision counts on King were higher in 2014 than the average over the past seven years. Staff noted that this is not enough data to indict the bus lane, but Collins still blamed it in his motion.

Yet when you compare collision totals on Main over the same period, you see the same spike in collisions in 2014.

The Hamilton For Transit community organization plotted the collision totals in a chart for their bus lane fact sheet: 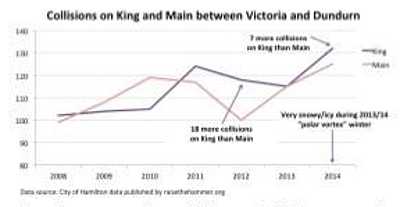 Collisions on King and Main between Victoria and Dundurn, 2008-2014

Since the two streets are one-way in opposing directions, overflow traffic from one street will not spill onto the other, meaning the increased total on Main is not likely to be a secondary effect of the bus lane on King.

Ward 8 Councillor Terry Whitehead commissioned a city-wide telephone survey on the bus lane and referred to it during last Wednesday's General Issues Committee meeting to claim the bus lane is widely opposed by most Hamiltonians.

But the survey results themselves support no such claim.

In addition, the survey is poorly designed with leading questions, no demographic information and a sample set that is biased toward older residents.

Whitehead and Collins argue that we don't need the bus lane because Hamilton is not yet at a "crisis point" for traffic and transit congestion.

Transit Director David Dixon argued that Council has a choice to lead growth in transit by building the capacity that will grow ridership, but the bus lane opponents were unconvinced.

But as Jason Nason calculated in a recent post on Hamilton Today, when you include Burlington Transit, GO Transit, Coach Canada and Greyhound buses, as well as HSR buses that use the bus lane between John and James, there are actually 83 buses using the bus lane during afternoon rush hour from 4-5pm.

Conservatively (assuming half-capacity at the low end and full capacity but no standing at the high end), that means between 1,484 and 3,045 people travel by bus on the bus lane during rush hour.

So even by the narrowest technical criteria, the corridor at least approaches and likely far exceeds the ridership threshold to warrant a dedicated lane. And as Dixon told Councillors last Wednesday:

It really depends on where you as a city want to be. You can lead people to become a more progressive, transit-oriented city, or you can choose to let that evolve naturally. And so really it becomes your decision.

We have been following the "natural" approach for years, and the result is stagnating ridership and a succession of missed transit growth targets.

Last Saturday, a group of 60 residents joined a meeting to plan a new organization to advocate for transit riders. An immediate outcome of the meeting was an online campaign for people to tell Council they support the bus lane.

The campaign has only been running for a few days and it already has 890 supporters (as of this writing). Please take a moment and add your voice of support so Council gets your message before tonight's meeting.

Actually, I am aware of those numbers they are not standards, they are suggestions. There are no standards that are universally accepted here in North America regarding non physically segregated transit lanes (painted lanes) minimum passenger capacity operating requirements, other than minimum width requirements. Those can be found in several locations including the North American edition of the International Traffic Engineers Guidebook and the OPPI/CIP land traffic norms guide (I have an older edition it may go by a different name now). The point is that, its the common positive transit and traffic effect that these bus lanes have had in no less than 30 North American cities were they have been used. The resistance to them is common but, this eventually dies out as drivers get used to them.

Many people still hold the opinion that a clear nearly empty road is the ideal in road/highway planning, engineering and operations. Many experts still believe it as well. They are blinded by that big and wide nearly empty road because it allows a maximum speed to be easily used by the driver. They don't know or care about what the effects are on pedestrians and or street life in those areas. They also don't realize that these streets should be busy with people and businesses not empty. They totally accept the complete segregation of uses in modernist planning of the 40's, 50's and 60's and believe that the sterile single use environment that it produces is positive.

The concept that a healthy city can be "messy and non uniform", very busy, have a multiplicity of uses mixed together, including housing as well as a transport system that caters to more than just road based transport, is quite alien to them. The fact that, you can read people's comments on this site saying that, being able to drive across a city the size of Hamilton in 20 minutes at rush hour is a good thing. Not evidence that your city is serious trouble and needs some big changes right now (considering its location in the Greater Toronto Area). You have a serious problem when you have an ex mayor who believed that, all day GO Train service was more important to the development of your city than a rapid transit line (LRT or BRT) serving its downtown core! A sitting mayor actually thought it was more advantageous to have public transport that leaves your city to go somewhere else, than to develop rapid transit actually serving inside your city. Your Councilor Whitehead I believe is a product of that environment and this overly suburban lifestyle. I have seen many like him and they will fight any change, even mundane and moderate ones to maintain that lifestyle until, a crisis point is reached. The crisis could be environmental, like really bad traffic or it becomes personal, such as he can't afford it any longer and or his literal life may depend on the need to change.

Until people like him reach some kind of forced or unforced realization the same thing will continue to come out of him. He is comfortable in his lifestyle and will fight to maintain it. He is probably actually confused by people who think that, living in a urban environment by choice is a positive thing. Why walk or for god's sake bike to a street market to buy fruit and vegetables 2 or 3 times a week when you can get in to your car and drive to a large comfortable store and get a week's worth of groceries and just drive home (some even deliver to your house). He probably thinks people like that are just a little crazy.

Why have a sidewalk in front of your house, all it does is add to your tax bill, disturb the site lines on your pretty front lawn and garden thereby, lowering potential property values. Worse of all people you may not now or trust can actually walk in front of your house and potentially attempt to communicate to you. If I want to talk to them I will, now, go away! Unless its election time then he will talk your ears off. I wish I was being overly dramatic and sarcastic but, my professional experience in the urban planning field with this is more common than uncommon unfortunately.

Never mind getting caught up in the bs of numbers, Hamilton not only needs to keep the bus lane, they need to expand it from eastgate square to Mac or even Dundas. Let's as a city get ahead of this thing not always behind. If you're going to do something, do it. Don't pussyfoot around. The people that are going to be moving into the thousands of new condos being built are going to want a robust transit system. The younger people today and future generations don't want to live in the suburbs and many aren't even bothering to get drivers licences. They want public transit. Public transit is the future of all major successful cities. Hamilton should get ahead of the curve. If Hamilton balks now at this bus lane test, we will miss out on funding from the Provincial gov't. What kind of message are we sending. Future generation will wonder what were we thinking. How could we not seize this opportunity. I think it would be a huge mistake for the city of Hamilton to scrap the bus lane.