We believe that a more fully integrated and efficient transit system is a priority for Hamilton, and that the bus lane is a positive first step towards realizing that.

I support the bus lane in downtown Hamilton as a citizen who owns property and lives in the downtown core, and as a business owner who operates a business on King Street East.

I believe that Hamilton city council should support the modification and ongoing implementation of the bus lane. It is one of the key initiatives that will change Hamilton from a car-centric city into a complete city where our streets are safer, where transportation includes efficient and affordable public transit, automobiles, pedestrian use and cycling.

Last year, the business I co-own and operate, Cafe Oranje, was just new. We opened our doors on King Street East, tucked in the eastern end of the International Village BIA, in late August.

In October we heard that Hamilton was installing a bus lane as recommended in the Rapid Ready transit report, as a pilot to determine the readiness for the future installation of light rail transit (LRT).

I had a bit of trepidation about the possibilities of backed-up traffic and people choosing to not use the core, meaning we would have less traffic driving by our store front.

However, I'm a supporter of progress and a firm believer in 'temporary pain for long-term gain.' I was willing to endure what could be some tough months considering we had just opened the cafe, because I knew that it was necessary preparation to see progress.

And that was that.

The bus lane opened and initially we saw traffic backed up at certain periods. The first week was pretty bad throughout periods of each day. By the second week I noticed that traffic concerns had eased. Even during supposed rush-hour traffic times, there was rarely any back-up in the village.

I figured change is tough and it takes a bit for us humans to adapt, but adapt, we typically do.

By Friday, November 8, 2013 during what should have been rush hour, I took a picture from the door of the cafe looking west directly down King Street and put it out on Instagram. You can see the traffic lights are all red, but what's missing from the photo is any evidence of any backed up traffic, there's not a car in sight. 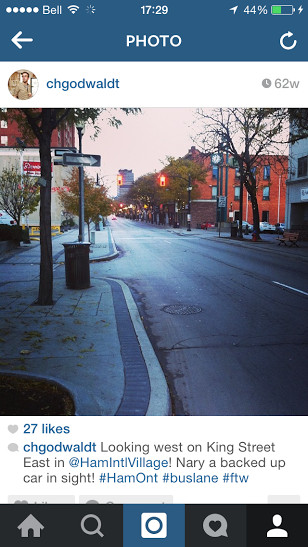 In the first week, an exciting thing happened several times. New customers came in exclaiming that had it not been for the backed-up traffic, they would have never seen us because their concern was getting through the city as fast as possible.

Ironically, the bus lane was actually helping us build our business by causing drivers to be more attentive to their surroundings.

In addition, the installation had faults: the paint wore away quickly through winter, some signage was difficult to understand, and working the buses across King to enter the MacNab Terminal wreaked some havoc. Let's fix those concerns!

Cusp of a Great Renaissance

My husband and I live downtown. We either walk or bus everywhere, including to work. We rent or use CarShare for out-of-town trips, visiting family, and running errands.

We have chosen to live in and to be active in the growing downtown core because we believe Hamilton is at the cusp of a great renaissance. We believe that there are many passionate people choosing to make the downtown their home and workplace; the place they raise families, shop, be entertained, worship.

To me, this indicates Hamilton is ready for development, and we need wise and passionate leaders to come alongside and see the possibilities, to cast vision and then to do the hard and sometimes difficult work of seeing that vision come to fruition.

We believe that a more fully integrated and efficient transit system is a priority for Hamilton, and that the bus lane is a positive first step towards realizing that.

My business partner and I had the opportunity to open Cafe Oranje anywhere. We specifically chose to be downtown because we love what is happening here. We love the developing culture, the feeling of being connected, and we love the idea that Hamilton is growing, developing and changing.

We support the installation of cycle lanes, of traffic calming measures, and of working towards development that will make Main Street and King Street less of inter-city highways, and more complete to encompass all modes of transportation at much safer and enjoyable levels.

I believe in the bus lane; not that it's a perfect thing, nor that it's the key to development. But I do believe that modifying the implementation and keeping the bus lane sends a powerful message to citizens, business owners, key shareholders, the GTHA and the province of Ontario that we are ready to see even greater things.

We won't be held back by the current state, but that we'll look wisely ahead, knowing that temporary pain will indeed be our greater gain!

Christopher and his husband, Kevin, live in downtown Hamilton. Chris co-owns Cafe Oranje, a small coffee shop in the International Village, and is passionate about seeing Hamilton progress at the hands of entrepreneurs and citizens all over the great city.

Excellent article. Thanks for sharing your thoughts and experiences.

Thank you! I appreciate the feedback!

I find your post a little curious, since it doesn't match my experience as a driver. I find that during the day, usually well before lunch on a Friday, I'll make it as far as Denninger's before I hit the slowdown. And once I hit Mary, it's really maddening. I've started just scooting down Victoria to Cannon to avoid the mess.

But, I can see that one tiny fix - the bus priority light at King and James - would solve the slowdown. I can't believe that council voted against improvements. Honestly!!

I haven't had a chance to try your coffee shop yet, but will look for it once the weather warms up.