Centenary United May be Headed Toward Demolition

As Centenary Church looks toward demolition, we need to talk about the future of church buildings.

Another one of Hamilton's downtown churches is in financial distress, and the 19th century landmark structure could be heading towards sale or even demolition. Centenary United Church on the corner of Main and MacNab wants to be removed from the City's registry of buildings of heritage interest.

Centenary United Church at the corner of Main and MacNab

There's only one reason to ask for removal from the registry: to make it easier to demolish a building.

Being listed in the registry is not the same as designation under the Heritage Act and does not do much to protect a building. It only delays the issuance of a demolition permit by 60 days (Ontario Heritage Act S27.3), and provides access to some limited City grants.

Without listing, a demolition permit would be granted as a right with no public notice. 'Permit one day, gone the next'.

Centenary United Church is not a designated building, meaning the "minor alteration" loophole used to demolish most of James Street Baptist Church cannot be used.

Recently, a set of listed buildings were facing demolition, and public attention ultimately led to the buildings being saved from the wrecking ball. In December 2012, the community was surprised by a demolition request for the pre-Confederation building fronting onto Gore Park at 18-28 King Street East. 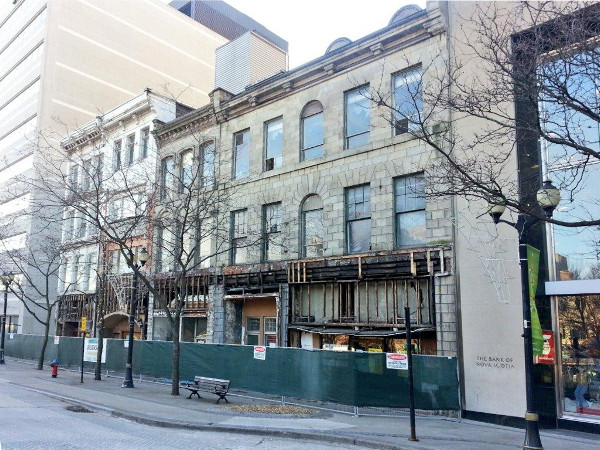 There were repeated outcries from the City's heritage advocates asking Council to revoke the demolition permit.

They were ignored until suddenly, Council voted to designate in December 2013.

If the buildings had not been listed on the Registry, the wrecking ball would have finished the job before anyone noticed.

This brings us back to Centenary United Church, which recently merged with St. Giles United Church to create a new entity called "One Main Street United Church".

Obviously, any attempt to seek a demolition permit as a condition of sale will result in a similar public outcry by heritage advocates and the neighbourhood association.

Meaning to successfully get a demolition permit, One Main Street United Church must first get the building removed from the heritage interest registry.

On August 21, Helen Bradley, chair of the merged church council, spoke in front of the Hamilton Municipal Heritage Committee asking for the removal.

The presentation officially claimed the heritage interest listing could interfere with the church's Charter Rights to free exercise of their religion.

Numerous times, Bradley spoke of a need to look at disposition of the building now that they've merged with St. Giles Church. As she noted, the listing impacts the value of the building as an asset for sale.

Committee member Paul Wilson (yes, the writer) asked Bradley: "The property - if you need to sell the property - would be worth less if the new purchaser could not tear down the building?"

Bradley responded, "Potentially, it would certainly narrow down our possibilities of building disposition."

The Municipal Heritage Committee received the church's delegation and kept the building listed. They voted to schedule a full designation review for the building in 2021.

The church building's cornerstone was laid on May 28, 1866. It's a prime candidate for heritage designation.

"The Churches are not the villains here," said Paul Wilson. "You have known property we all enjoy driving past - and meanwhile you have to pay the bills."

This summarizes the dilemma facing churches across Canada, the United States, and Western Europe. The buildings are pillars of the culture heritage and character of cities - especially downtown cores - but unaffordable for shrinking church congregations responsible for their maintenance and upkeep.

Large churches, and especially those built during the 19th century, are expensive to heat, commonly difficult to retrofit for modern accessibility requirements, and many require costly capital repairs that will cost their shrinking congregations millions of dollars to perform.

They are purpose-built for a limited role, the Sunday worship, that society no longer demands.

They are relics, but relics many people - likely the vast majority - want to keep.

Churches are being converted to other uses. Some uses keep the community hub role of the building such as a frat house in upstate New York, coffee shops (while remaining a church on Sunday), conversion to a mosque, breweries, and even an indoor skateboard park.

Video with footage of the skatepark built inside a former church (Video Credit: mpora)

More commonly, churches are converted into housing, mostly into condominiums, with a few even becoming private mansions (check out this extensive slideshow of a converted church in Annapolis).

One Main Street United is receiving assistance from the United Church of Canada to explore future options for their downtown church.

The United Church is familiar with selling former churches for adaptive reuse into housing: here's a 2011 article from the church newspaper.

While adaptive reuse is common to other post-industrial urban centres, it's still a rarity in Hamilton.

The land Centenary United owns at Main and MacNab is likely more attractive (and lucrative) to a developer for a new residential tower than it is as a candidate for adaptive reuse.

As noted earlier, there are two obstacles to demolition.

Council's shown in the case of the Gore buildings they'll designated a listed building facing the wrecking ball, and because it's not designated, it can't be demolished as a "minor alteration".

What's next?, this is the question that must be answered in part by society.

Do we increase the tax incentives for adaptive reuse of designated heritage buildings, do we leave it to the market to determine how this church eventually gets reused, or even buy the building as a City?

What's clear: We need to start discussing what we plan to do with heritage churches that no longer have the congregations to support the buildings that, as Paul Wilson put it so well. "we all enjoy driving past".

In absence of the conversation, we should be prepared to write new chapters of Vanished Hamilton.

Personally, I see it as a candidate for a great mixed-income partially affordable housing project.

It sounds like the congregation mostly just wants to get the most money for selling it and is disinterested in what the potential buyer will do with the building.

While I'm sympathetic - I like money, too - there doesn't seem to be any real justification for removing the heritage designation besides proven-failed ideas of urban libertarianism.

James St Baptist has demonstrated that council will allow even the most extreme modifications of heritage-interest properties, so they can market on that when they're selling the thing.

It's a bit of a slap in the face that, after years of being supported by the city (in terms of not paying property taxes), the United Church wants the property de-listed so they can make more money out of it. What about sticking up for the city that supported you and encouraging adaptive re-use instead?

I think that the congregation is more interested in sticking up for the Jesus who cares for the poor, the sick and the homeless, and not at all for heritage structures.

They are purpose-built for a limited role, the Sunday worship, that society no longer demands

Kevin’s comment: I somewhat disagree with both statements. Although the specific use will vary from congregation to congregation, I am not aware of any church buildings in Hamilton that were purpose-built for the limited role of Sunday worship.

A good example of this is the Anglican Church’s “Book of Common Prayer” with its instructions for daily morning and evening prayer services. Instructions that include advice to ring the church bell not only to summon the people, but so that those who are working may be able to hear the bell and lift up their hearts to God in the midst of their everyday occupations. The point being that the worship of the community is a 7-day-a-week activity, not a Sunday morning activity.

Next, I must somewhat disagree with the “society no longer demands” statement. It is true that in any particular place needs may change. But that has always been true. For the past 2,000 years particular church buildings have been built and torn down and moved and changed. Indeed, many of Hamilton’s “historic” church buildings contain bits and pieces from previous church buildings.

What is particularly ironic is that when these buildings were being built in the 19th Century, there was no shortage of trendy contemporary commentators, from Karl Marx on downwards, proclaiming the imminent death of Christianity. Today, 150 years later… not much has changed.

I think she was commenting on the general problem of the size and location no longer aiding their mandate or mission. It wasn't a comment directed at the imminent death of Christianity.

People and utility before heritage preservation has been a United Church preference in other cases, for example:

I believe that the statement I quoted was by Joey Coleman and not Helen Bradley.

Sorry, I had just listened to the church disposition to the committee and associated your comment with Helen Bradley's remarks, especially about the need to downsize facilities to match the reduced size of the congregation and their views about how best to meet their social mission.

Joey's interpretation can be read as pushing the argument further and making a more general statement. I see it less as a comment on Christianity in general and more about the local geographies ... the Hughson Street Baptist Church seems to be flourishing in the North End (they do their service in the local school gym, because they have outgrown their historic church building across the street ... and I understand they plan at some point to build a new church somewhere in the area). A kilometre or so up the road a Baptist church was sold to a developer and mostly demolished ... their were questions about the structural soundness of the building, but I also think the congregation there had dwindled too. Joey's piece raises most of the questions we should be asking, especially those of us who wish to preserve heritage buildings ... it isn't always greed driving things.

I certainly agree that there are other issues at play here rather than greed. Indeed, it is rather refreshing to see a clash of values in which personal financial gain is not one of them.

For churches in general, those values include the Gospel imperatives of caring for people who are poor, sick, homeless, refugees, prisoners or otherwise marginalized. They include the worship of God and bringing forgiveness and healing into people’s broken and messed-up lives.

Which, of course, is where the conflict with the City government comes into existence. Unlike the church, the government’s values do include the preservation of heritage buildings. I note that in Quebec, the government provides generous heritage preservation grants to churches. I was rather astonished when I first saw one of their signs on the scaffolding of a church restoration project in Montreal, complete with the government slogan, “Our religious heritage: A sacred trust.”

Alas, we live in Ontario. This forms the core of Helen’s freedom of religion argument: the government should not dictate to churches that they use their resources in ways that are incompatible with their religious beliefs.