A couple of weeks ago, I called the Open Streets movement "a chance to experience a city made for people", and sure enough, last Sunday's event on James Street North was just that. 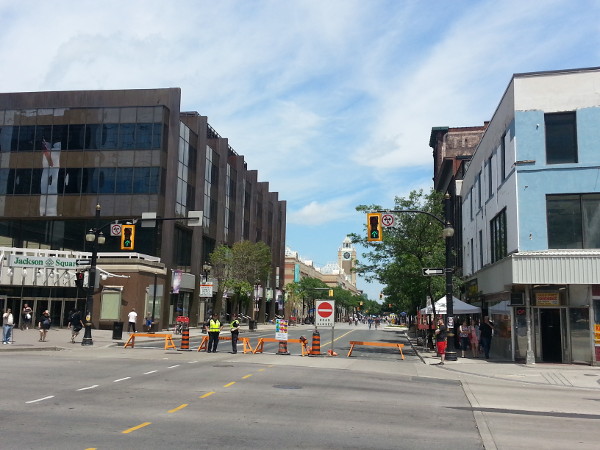 We call it a street "closure", but in reality the street is being opened up to a much wider variety of uses than are possible when most of the right-of-way is dedicated to automobile traffic.

All week, weather reports said it was going to pour rain all day on Sunday, but after some light spitting and ominous-looking clouds early in the day, things cleared up nicely in the afternoon. Attendance started pretty light but more people showed up as the weather cleared. 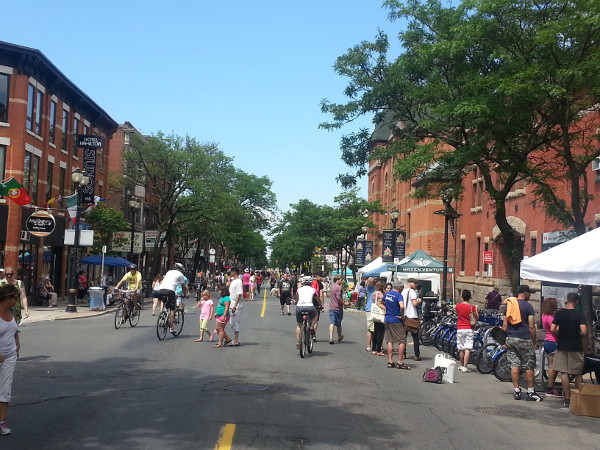 More and more people came as the weather got more confident

That said, the danger of being rained out highlighted just how important it is not to put all our public-space-reclaiming eggs in one basket.

Open Streets should ideally be a weekly event on summer Sundays, and it should cover a much wider circuit of the city than just one street. That way, bad weather won't make it a washout.

In addition, if it becomes normalized it won't need to be as organized - the events and activities on it will be more self-organizing. 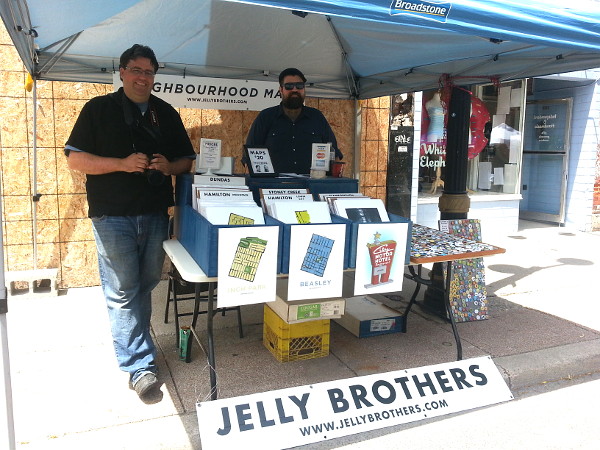 The Jelly Brothers, Matt and Dan, had a booth set up

The section of James near King was pretty sparsely populated, mainly because the surroundings - especially the Jackson Square fortress - are not especially conducive to people being around. 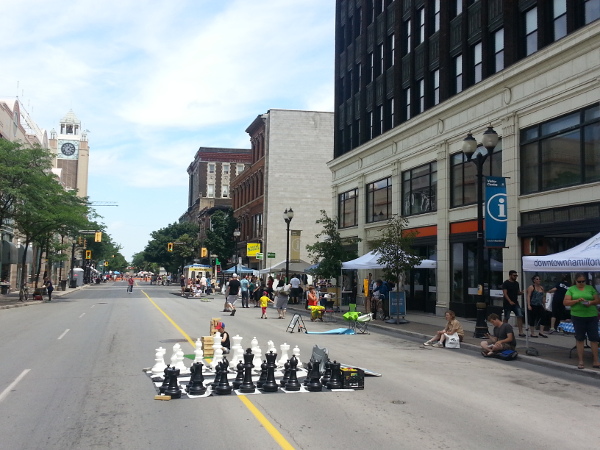 A large chess board was set up on the street 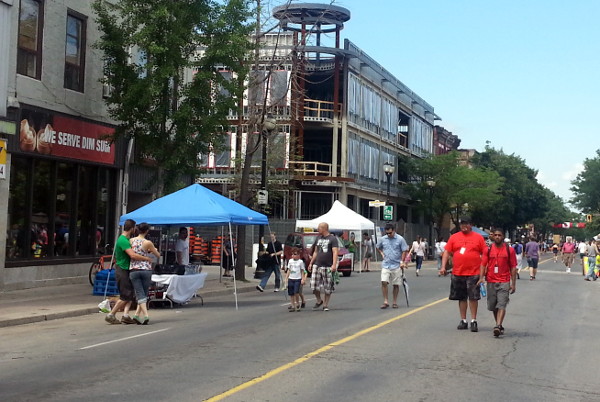 A couple danced to Latin music outside Mex-I-Can

However, the street got progressively busier going north, with a very lively stretch between Vine and Barton. 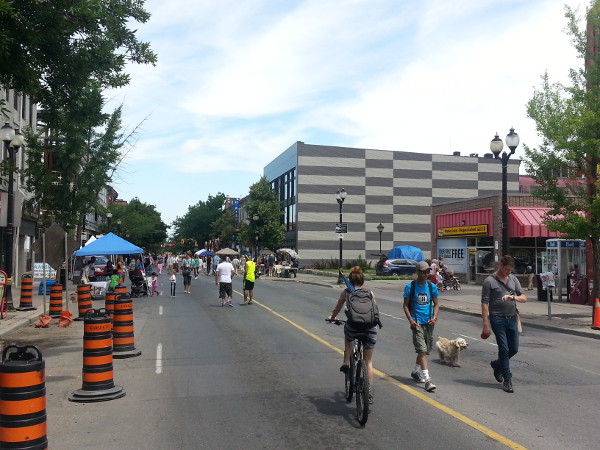 Lots of people at James and Vine 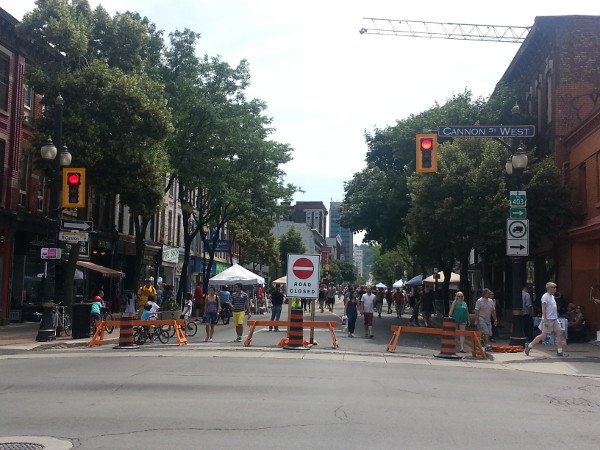 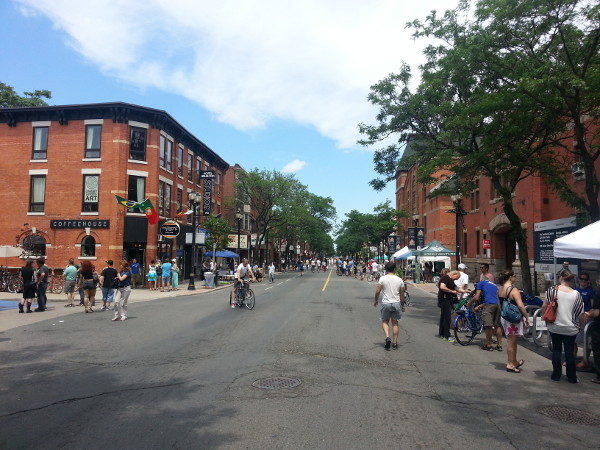 The street was busy with people at James and Mulberry

A particular highlight was the Hamilton Bike Share demonstration. The local bike share organization had two stations set up, one near Mulberry and one at Pier 8 near the Countdown to Pan Am Games event. 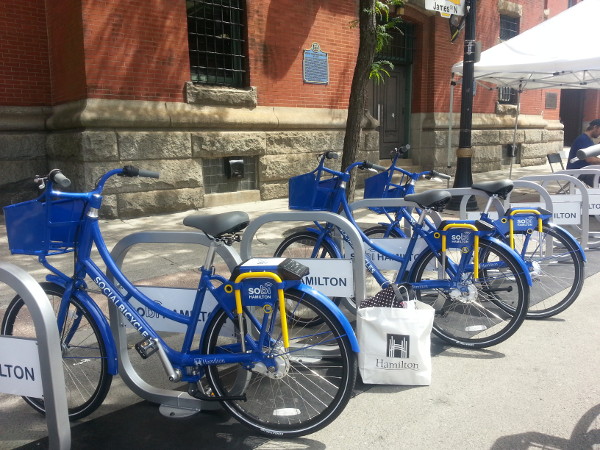 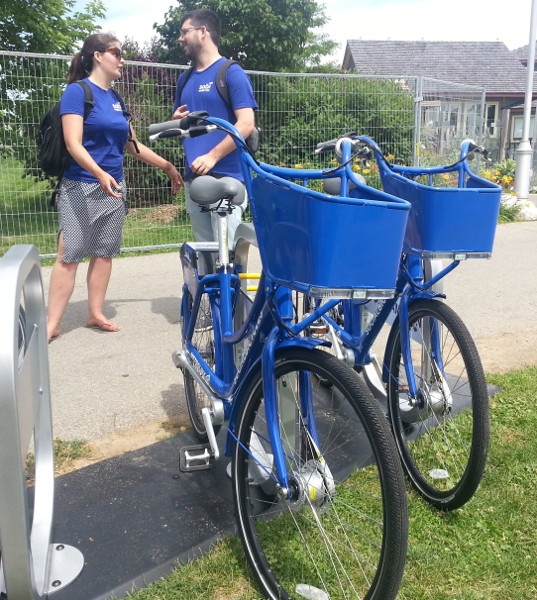 I got to try one of the bikes, which are being provided by Social Bicycles with full capital funding from the Metrolinx Quick Wins fund.

The bike was a delight to ride, with an upright Dutch-style design and low crossbar, a soft, comfy seat, easy shifting (it's a three-speed) and a basket to hold the bike helmet I didn't need.

The bikes are built for comfort, not speed. You can easily ride it wearing street clothes rather than dedicated cycling gear, and the sealed drivetrain means the chain won't get gummed up or rusty in inclement weather. Combined with the splash guards, it means you won't get gummed up either. 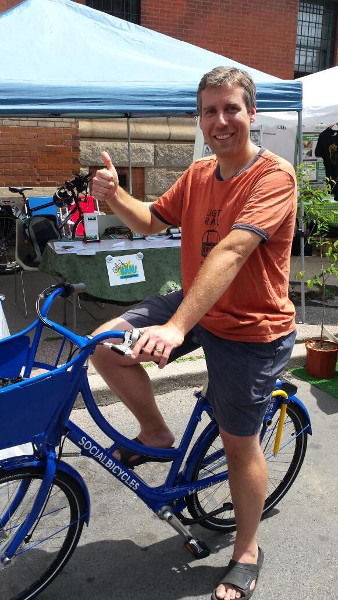 I got to try a bike share bike (Image Credit: Peter Topalovic/Twitter)

In The Netherlands, car-free Sundays led to extensive permanent car-free zones in the downtowns of most major Dutch cities. We are only 41 years behind...

For how this worked, please see the video at:

Just wondering about the security of these social bikes, are there cameras placed at the bike stations? I'm worried about vandalism/ theft, etc.

This may seem a divergence, but I believe it's connected: There's a valuable discussion to be had about the current issue of loitering downtown. It was covered in The Spec yesterday. Maybe the conversation deserves to be broadened...?

By "loitering" do you mean "exercising the constitutional right to freedom of assembly" on public property?

"Open Streets should ideally be a weekly event on summer Sundays, and it should cover a much wider circuit of the city than just one street."

Agreed. After eight closures of James North in the space of four years, it's time. One street connecting two neighbourhoods has showcased the potential. Maybe it's time for Open Street North Downtown to evolve into Open Streets Hamilton.

Loved Sunday. It was great to just stroll. Also important to note, every restaurant was packed, patios were packed, food trucks at Pier 8 with the World Cup game outdoors did great business. Apparently we don't need car traffic to sustain business, and some restaurants I suspect will show higher incomes than a typical Sunday.

Also had the discussion with some folks in the hood about it being weekly over the summer and extended/connected to other neighbourhoods. In Bogota, I got to witness the weekly Ciclovia and noticed that many streets were entirely closed, but some were partially closed. Also, they have a huge network connecting massive areas of the city.

An idea: close Locke, or at least half of it, from Herkimer to Main. Close all of Locke from Main to Barton. This allows for connection to Dundurn Park and eventually the Locke-Waterfront pedestrian bridge if it ever gets built. Close James as it currently is Close Ottawa from Barton to Gage Park. Close one extra lane of Cannon to double the width of the soon to open bike lanes allowing for connection from Ottawa to James and Locke safely.

Other additions: James South to St Joes Drive, and half of St Joes Drive and the south half of the Jolley Cut up to Sam Lawrence Park. Augusta from James to Walnut/Shamrock Park Concession St from Sam Lawrence to Gage

Lots of possibilities and would be great to connect upper/lower city and destination parks with retail/commercial corridors along the route.

The bike was a delight to ride, with an upright Dutch-style design and low crossbar, a soft, comfy seat, easy shifting (it's a three-speed) and a basket to hold the bike helmet I didn't need. [emphasis added]

I know eh? There go us crazy anarchists throwing away the entire fabric of society and civilization and returning to true feral anarchy with no rules or social order, in a paradise of true punk fight club counterculture ...

Hey, you know who the last person I saw smash their head was? A passenger in a car!

Above satire aside, I do advocate wearing one. But people we have important transportation infrastructure issues to address.... OH MY GOD AN ADULT IS RIDING WITHOUT A HELMET STOP EVERYTHING

You can make the exact same kind of analogy for motorcyclists who feel that sandals, shorts, t-shirts and the like are proper attire while riding. It isn't legally required to wear steel-toed boots, leathers, etc., but it makes it a hell of a lot safer when you do get in a collision or wipe out. Same goes for bikes - I'd rather be wearing a helmet than not when I get in a collision.

I tip my hat to you and your ridiculous comment there. Bravo.

I read this more as a comment on the lack of cars on the street, hence a safer cycling environment.