Cities and towns around the world are moving to a 30 km/h speed limit for residential and urban streets.

The kinetic energy of an object is related to the square of its speed, so if you double a car's speed, you quadruple its energy. You also quadruple its stopping distance, which means it's harder to avoid hitting something (or someone) in the first place.

Partly in light of this, Hamilton's North End Neighbourhood recently adopted a 30 km/h speed limit on most of its streets (with the exception of James Street North and Burlington Street) as part of a pilot project implemented under the Setting Sail neighbourhood plan. The plan includes both a lower legal speed limit and several traffic calming devices, including bumpouts and neckdowns at intersections to give pedestrians more room and shorter crossing distances, while forcing drivers to slow down through turns.

Threat of a Good Example

Part of the agreement is that the speed limit pilot project has to run for five years, and no other neighbourhoods are allowed to request a similar 30 km/h speed limit until after the five years are over.

What was Council afraid of? It certainly won't take five years to determine whether it makes sense.

If the evidence shows that Hamilton is like every other city on earth and a 30 km/h speed limit is safer and well-supported by residents, why on earth would they not want to expand it, and quickly?

Of course, we know the answer. People who persist in thinking about streets only in terms of how fast they can drive on them will reflexively oppose lower speed limits.

Some councillors either think that way themselves or are afraid to stand up to constituents who explode with outrage over the prospect that their commute might be a few minutes longer.

The good news is that public opinion is already starting to change. A recent survey conducted in the United Kingdom found that 78 percent of respondents support making the default speed limit 20 mph (32 km/h) on residential streets, around schools, and in village, town and city centres.

Several towns and cities are already doing this: some 12.5 million people in the UK, or around 20 percent of the population, now live in neighbourhoods that have implemented or committed to 20 mph speed limits.

After a highly successful two-year (not five-year) pilot project, the mid-sized industrial city of Bristol recently committed to establishing a 20 km/h speed limit across several large areas of the city. They will complete the work over a single year.

This status quo is unacceptable. The City of New York must no longer regard traffic crashes as mere "accidents," but rather as preventable incidents that can be systematically addressed. No level of fatality on city streets is inevitable or acceptable. This Vision Zero Action Plan is the City's foundation for ending traffic deaths and injuries on our streets.

A core strategy in that plan is to design streets that make it difficult to drive dangerously, including at dangerous speeds that put pedestrians at risk.

That is entirely consistent with the Ontario Coroner's Report on Pedestrian Deaths, which concluded that cities need to adopt a "complete streets" approach that designs streets to be "safe, convenient and comfortable for every user, regardless of transportation mode, physical ability or age."

From Reactive to Proactive

In Hamilton, we are still reactive - and barely even that - when it comes to safe streets. Staff have started a traffic safety review on Queen Street, but it took two serious pedestrian injuries in under a month and an upswell of citizen outrage to trigger. 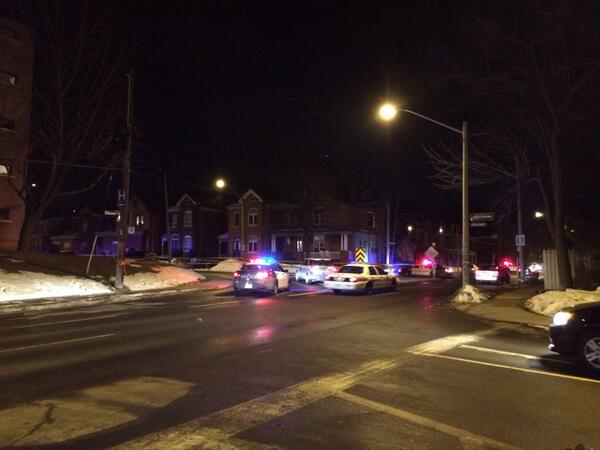 What we need is a more proactive approach that transforms how we design and build our streets. Instead of prioritizing fast, high-volume automobile traffic, we need to prioritize safety, inclusion and accessibility for all users - particularly the most vulnerable users, senior citizens and children.

Currently, the city's default unsigned speed limit is 50 km/h - dangerously fast for streets that pedestrians are expected to navigate.

In other words, we explicitly and deliberately design our city streets to the average flow of traffic will exceed what is already a dangerously high legal limit! These dangerous street designs incorporate multi-lane one-way thoroughfares, wide lanes, highway-style turning ramps and large corner radii, and the elimination of visual distractions - like street trees and curbside parking - that would reduce the perceived width of the street and send drivers a psychological signal to slow down.

And we wonder why Hamilton is the second most dangerous city in Ontario for pedestrians according to a recent report by the Social Planning and Research Council, with a pedestrian injury rate that is almost one and a half times the provincial average.

Time to Recall Our Streets

Last week, Nicholas Kevlahan argued that our streets are dangerous by design and, just as we would treat a defective consumer product, we need to issue a recall on our streets and redesign them to make them safe. On twitter, people are already organizing around the hashtag #RecallOurStreets.

I believe most Hamiltonians - even many of those who are currently in the habit of regarding city streets purely through the "windshield perspective" - can recognize and agree that everyone deserves to live, work and play in a safe, welcoming and inclusive neighbourhood.

If Council overturns its five-year cooling off period on other neighbourhoods adopting a 30 km/h speed limit, I would be very interested to see how quickly this becomes a popular request in neighbourhoods all across the city.

A bigger question that I haven't seen asked is the "why the variability in our roads?"

-- the city purchases vehicles (buses, large service trucks) that are nearly the same width as the lanes on Main - doesn't see the irony/danger of the #10 passing the #1 by using two lanes of the 5.

I'm just so tired of the insanity.

And the "we're Hamilton, we don't deserve better" that is the constant refrain of the Hamiltonian native - usually in response to someone who moved to Hamilton because they saw the potential that native Hamiltonians refuse to see and actively work to undermine.

(edited to fix up spacing issues)

IIRC, Main is posted at 60 west of Dundurn.

Only for a 100 meter stretch to the other side of the 403 bridge. I have been in contact with the City to have it reduced, and it was to be reviewed in January. Mchattie and David Ferguson, Superintendent of Traffic Engineering, were in support. I've just emailed again now for an update. But, all that said, posted speed limits are only one part of the equation - design matters most.

This really is the issue - design. Cootes Dr near Mac has a speed limit of 50. Doing 50 there takes some serious effort. Anyone just driving comfortably safe would hit 80-90 without realizing it. And of course, the limit jumps to 80 past the university. It was built as Highway 101 and as such, feels and functions like a highway. Speed limits are great, but we need to narrow and redesign so many roadways so they feel uncomfortable if driving over the limit.

I agree that it makes sense to limit speeds in congested residential areas,especially those that must also accommodate on street parking.

Likewise it is important to rationalize the speeds on routes that must be acknowledged as high volume thoroughfares and will always be full of people trying to traverse long distances through the city as quickly and efficiently as possible. 40 KMH on the 4 lane Kenilworth access makes no more sense than 50 through the north end.

We need to enact limits and restrictions everywhere that make sense to people so that they will more readily be heeded in the areas where they are important.

...people trying to traverse long distances through the city as quickly and efficiently as possible...

... should not be routed through the city's core cultural, business and residential neighborhoods when there are viable alternatives.

While more population-dense areas are less likely to see crashes, that doesn’t necessarily mean downtown is safer than the suburbs.

The potholes are going to ensure nobody can travel more than 30 km/h in the lower city soon. Cheaper than signs or speed bumps.

So how about a 30 to zero awareness campaign? (playing off the usual 0 to 60 in 7 seconds message used to sell cars)

I can think of a few local creative shops and media partners that could do a very good job with this kind of a campaign.

Zero pedestrians hit by cars is our goal.

30 km / hr in neighbourhoods is the way we'll reach the goal.

Enlist the support of drivers, including some high profile Hamiltonians (including our political leaders). Have us take and sign a pledge. Slap 30 to zero on bumper stickers and windshield signs. Put signs up in the neighbourhoods & storefronts.

Only need a minority of drivers to sign up and get on board.If I drive 30 km through Westdale, Locke Street or James North, the cars behind me have no choice but to slow down and do the same.

Ease off on the facts, stats and studies. Aim for the heart rather than the head. Make 30 to zero personal and emotional. Tell us stories about the kids and seniors who live in our neighbourhoods. Who cross the streets to get to school, go to the library and the grocery store. Remind us what matters most.

Catch and reward responsible drivers in the act. Team up with BIAs. Give me a free Chuck's Burger for stopping to let a family cross Locke Street and I'm a happy camper.

When we get behind the wheel, we're still parents and grandparents. There's nothing we wouldn't do or sacrifice for our kids. And I'm willing to bet that includes easing off on the accelerator, lending our support to a 30 to zero campaign and making Hamilton the best place to raise a child.

I have rights, I don't want to drive 30 because some tree hugger was coddled by his mommy too long. This is the real world with things to do. I'm in a hurry and so is everyone else...let's go already. Hit the gas. Stay on the sidewalk pedestrians and bikes stay to the right or stay home or get a f'ing car. Let's keep Hamilton moving fast.

I live off of John St in the Corktown area and personally know of at least three pedestrians being struck by vehicles between Augusta St and Hunter St in the last year alone one of which was fatal while the other the woman broke her neck when she was hit by a cab. The third one the woman was rushed to General injuries unknown. The problem is that ever since they took out the stop signs at John and Augusta cars now fly down the hill off the mountain at outrageous speeds. Just last week I saw a young woman struck by a vehicle and thrown into the intersection. Enough is enough. Put the stop signs back in at John and Augusta and lets stop some of these tragic accidents. Don't like the added wait to your drive from stop signs? Too bad take another route then.