Graeme MacKay, the Spectator's editorial cartoonist, may be onto something in his Saturday, April 12 offering: 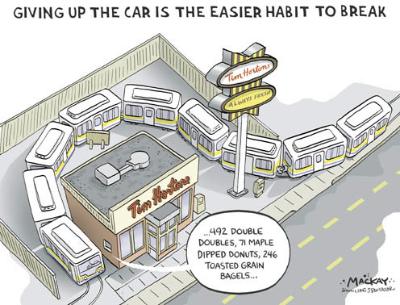 "Giving up the car is the easier habit to break"

After I finished laughing, I realized that this could actually be an excellent idea.

Imagine strolling onto a light rail car, sidling to a coffee shop in the rear and getting a cuppa to enjoy on the way to work!

I mean, why not? It's a smooth ride, the vehicles have several entrances and exits so it's easy to move around and the vehicle size is limited only by the width of a city block.

The city could rent out the space and increase its operating revenue, while at the same time improving the quality of experience for the passengers.

As we at RTH have written time and again, the real attraction of light rail over buses is that it offers a more comfortable transit experience and treats its passengers with respect and value.

As much as I enjoy riding the bus, it still feels rather like a social service for people who can't afford a better alternative. As a result, it will always be limited in how many people it can draw out of their cars.

And that makes all the difference.

neat. how about a bar car?

One letter below this cartoon in today's Spec. put it into the real prospective of the 'Burbs. The writer from Flamboro stated that you 'Can't get there from here'. No public transit out that far to get you to the light rail, no parking out there with a shuttle service, & not much available parking downtown. (But don't we want to 'punish' people who bring cars Downtown? Even if they wish to do the bulk of their trip by public transit & light rail?)

I doubt that light rail will venture into the far reaches of the GHA, or be accessable to those residents without some kind of provision to get those people to light rail stations. This is a point that seems to be missed over & over by those who are lucky enough to have something resembling functioning public transit! You can't beat people up for not using something that is unavailable to them.

Flamboro is serviced by a private bus company that runs buses once or twice a day. (Not very useful at all!) I live much closer to the City, but have no bus service on Sundays or holidays. The last bus from downtown leaves well before midnight. This makes using even current GO bus & train service difficult & expensive, esp, if you tack on a $40.00+ cab fare to get home from the GO station.

As for the Timmy's Habit. I've given it up. Bad coffee (that now costs more than a good cup from Fortinos) is served by crankypants people.
I'm tired of the Timmy's traffic tie ups, & near misses on the roads & in their parking lots. It may be a Hamilton Institution, but civic pride ought to be worth more than that.

Well good news would be that there might be enough buses freed up to allow extensions of more regular runs into the outer reaches of the city including flamboro and stoney creek....hopefully.