In his remarkable book The Ingenuity Gap, Thomas Homer-Dixon argues that as societies confront crises involving complex systems, they need the right kinds of ingenuity at the right times to solve those crises.

The danger, in Homer-Dixon's opinion, is that our problems are growing ever more complex and the right kinds of ingenuity might not continue to be available. Converging crises could overwhelm our capacity to respond appropriately.

By contrast, Joseph Tainter argues in The Collapse of Complex Societies that such an event should be understood more specifically; he argues that societies respond to crises by adding complexity, and that complexity is subject to the law of diminishing returns.

Eventually, the marginal returns on added complexity turn negative, and since the society only knows how to add complexity in response to its problems, it starts to collapse under its own weight.

Over the past several decades, real spending on health care per capita and as a share of GDP has increased steadily in the United States, but the rate of life expenctancy growth to health expenditures has been falling steadily and is now close to zero. That is, life expectancy is still growing (for now), but much more slowly than spending.

For the sake of this example, I borrowed a measure from Joseph Tainter and defined health care productivity as combined life expectancy divided by real (inflation-adjusted) per capita health care spending, plotting it from 1970 to 2003 (I chose this period based on the fact that health care spending data were readily available). 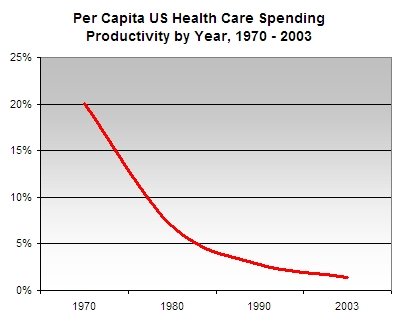 As you can see, the impact that increased health care spending has had on increased life expectancy has fallen steadily. In other words, additional spending on health care is subject to the law of diminishing returns.

Many health experts predict that the North American lifestyle of low physical activity and copious amounts of processed fatty, sugary, salty foods will soon result in life expectancy at birth falling for the first time - a negative return on the complexity of our food production, transportation, and entertainment systems.

While Homer-Dixon's book is qualitative and multi-disciplinary, drawing examples from a number of fields to illustrate his arguments, Tainter's book is more quantitative, positing a way to measure social complexity for the purpose of analysis.

Just as Homer-Dixon believes it may be possible for society to produce ingenuity quickly enough and appropriately enough to stay ahead of its problems, Tainter believes technical innovations or discoveries of new energy sources can raise basic productivity enough to offset the cost of more complexity.

As long as the supply of energy and ideas grows faster than the level of complexity, then the society can still grow and fluorish. For example, the Green Revolution of the 1960s and '70s was based on discoveries that allowed farmers to increase crop yields dramatically by supplementing - and ultimately replacing - organic processes with hydrocarbon inputs in the form of natural gas-based fertilizers, petroleum-based pesticides, petroleum-powered mechanical harvesters, food processing, and so on.

However, the sheer rate of hydrocarbon energy required to produce food energy is staggering in its inefficiency. Richard Manning notes that it takes ten calories of fossil fuel energy to produce one calorie of food energy. When hydrocarbon production goes into decline, the effect on industrial farming will be devastating.

Similarly, sometimes an innovation can dramatically improve the productivity of the available energy. The government-imposed regulations that followed the 1973 OPEC oil crisis, for another example, provoked significant improvements in fuel economy, and today the most fuel efficient cars are several times more economical than the most bloated SUVs. (Nevertheless, thanks to loopholes in the regulations, a company like Ford has the same average fleet economy today that it had in 1908.)

Still, both writers seem to agree that the right ideas at the right time can forestall disaster - perhaps indefinitely. However, Jane Jacobs counters this cautious optimism with her last book Dark Age Ahead, in which she argues that the organized systems of feedback and response in our society - families, universities, the scientific establishment, governments, and professional bodies - are becoming too overburdened, corrupt, incompetent, and arrogant to do their job of stabilizing society against upsets.

Essentially, Jacobs agrees with Homer-Dixon and Tainter, but focuses on the role that mechanisms of awareness and decision-making play in a society's survival or collapse. She writes that societies fail when "confronted with such radical jolts in circumstances that their institutions cannot adapt adequately, become irrelevant, and are dropped."

I would be misleading the reader if I failed to point out that Jacobs' book is also ultimately hopeful: not only in the sense that she believes our stabilizing institutions can be reformed or replaced (Homer-Dixon calls this ability to reinvent our institutions "social ingenuity" as opposed to "technical ingenuity"), but also in the larger sense that in the long continuity of humanity, dark ages come and go and the dark age that lies in wait for us is no different.

Tainter actually goes a step further, noting archaeological evidence from late Roman times that suggests nutrition actually improved after the empire collapsed and local wealth was no longer being siphoned off to prop up the central hierarchy.

This is in keeping with the thesis of Albert Bates in his recent book The Post-Petroleum Survival Guide and Cookbook (read the RTH review) that a radical de-complexifying of our hypertrophied, globalized society would improve quality of life for those individuals and communities prepared for the transition.

Number 2 offers no hope by itself because it is subservient to the choices of 1, and heavily influenced by marketing demand.

Since presently, small c conservatism is the rule (this would still be true under say, the Democrats and the Liberals on this continent), point 3 will be widely defended.

I think the real hope is for progressive thinkers getting the ear of powerful people at a time of crisis but not quite collapse - which is why, despite the hit to my retirement savings, I am waiting for a recession to wake up politicians who have overdrawn this continent's capital to severe depths.