If Main Street is So Great, Why Are We So Embarrassed to Show It?

It's funny how the business community supposedly loves Main Street as a five-lane, one-way freeway, yet nobody ever represents it as such in renderings of new developments or upcoming projects.

Look at these renderings of planned renovations to the Art Gallery of Hamilton (AGH) fronting onto Main Street: 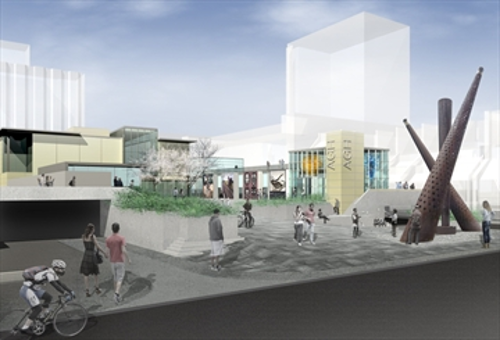 I love the guy cycling along merrily on Main Street and the people strolling right at the street edge. I guess they won't mind losing their elbows to a transport truck.

Here's a recent rendering of the new McMaster downtown health campus at Main Street and Bay Street. They turned Main Street into a two-way street and added a bike lane.

Look at all those people! I wonder why the designer didn't add a transport truck loaded with 19-tonne steel coils.

Remember this rendering of the Homewood Suites Hilton at Main and Bay? Lots of people, one car. 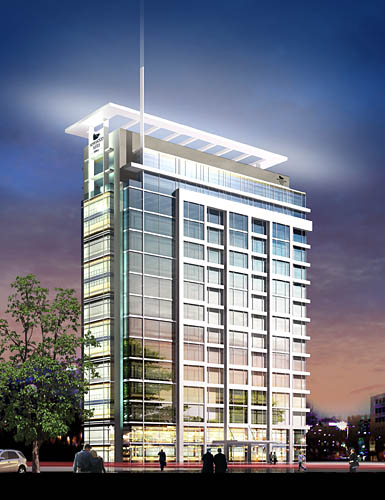 In this rendering, they decided just to ignore Main Street altogether: 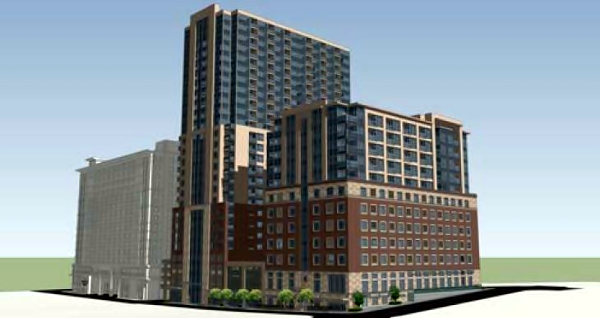 If Main Street is such a great competitive advantage over Toronto, as some City Councillors seem to think, why does everyone take such great pains to hide it and make it look more like a normal city street in, well, Toronto?

Another earlier rendering of 'Education Squre' (current Mac downtown site). These renderings also greatly minimize the horridness of Main and Bay, and seem to show both as two-way, normal looking streets.

Renderings are only ever loosely based on reality, and more about market cliche: off-white consumers with perfect teeth.

I'm not asking for patchy roads and dead trees. How about something even close to real life on Main.

Here is a condo rendering next to the GO Station in Mimico: http://sunnybatra.com/images/11555/On-Th...

And here is the real-life view of that same street: http://goo.gl/maps/3Dssq

The renderings always make life look uber grand, but at least they perfectly depicted the design and feel of the street.

Here's another one on Dundas St in the Junction: http://www.urbantoronto.ca/sites/default...

There's a reason architects refuse to show a 5-lane freeway with trucks and tiny sidewalks next to their beautiful designs on Main.

I'd sure love to see this article written with a positive look forward. If you're pushing for complete streets or some other solution, then by all means, push! Bashing the "horridness" of the heart of our downtown just makes people grumpy.

It's not as bad as this site makes it to be. I agree it can be better. However I completely disagree with horrid, disgusting and other negative comments. It's a big turn off for me on the overall cause. Peoples eyes see different things. I see positive change happening, just not quick enough for some people I guess.

I'm talking about the street itself, not downtown. I see no changes happening on Main, let alone "not quick enough for some people". What am I missing?? It looks the same today as it did in 1960.

I see miniscule positive changes but no will to change the things that actually matter, i.e. wider sidewalks, dedicated/protected bike infrastructure and two-directional car lanes designed for a continuous, slow flow of traffic on Main. Those are the design factors that have been identified for King and Main time and time again on this site and in multitudes of urban studied. What positive change have you seen happening in these areas? Zebra crossings? My definition of 'positive change' requires that something about the way Main/King work actually changes.

Main is horrid. It needs to change.

Bit of a tangent, but I was rather taken aback by the cyclist in that first image ... He's riding on the left-hand side of the street wearing some sort of futuristic battle armour. Perhaps appropriate for riding in the left-hand lane of a five-lane expressway, but I'm not sure how that's meant to be part of an appealing urban landscape.

Maybe they were trying to capture the moment between green waves. Or paying homage to the surplus capacity?

I take your meaning. But I also regard renderings as flights of fancy. Suburban tract homes are no more faithful.

I want very much to have the optimism and faith that these drawings were intended to show the city not as it is now, but as it will be in the near future!

I'm glad you are concerned about health impacts of emissions. You'll be glad to know that people walking and cycling don't emit any. So, the more of them we can encourage and accommodate into our road network, the better off everyone is.

“According to the Ministry of the Environment (Ministry), approximately half of Ontario’s smog comes from pollutants that originate in the United States and are transported here by winds. The other half, however, comes from domestic sources, including utilities (for example, power plants), industries (for example, metal smelters and petroleum refineries), on-road motor vehicles and other forms of transportation (for example, trains and aircraft). Vehicles also contribute to greenhouse gas emissions (such as carbon dioxide) and toxic contaminants (such as carbon monoxide and benzene), which also adversely affect air quality. “

Figure 1: Changes in Province-Wide Domestic Emissions and Contribution by Road Vehicles to Those Changes 1998-2010

Pollutant / Source of Most Domestic Emissions (2010)

Where do all the east/west cars go in Toronto between the Gardiner and 401? Why don't we bulldoze Rosedale, Casa Loma, the the Bayview/Eglington neighbourhoods and anything else in the way and build a new east/west highway through the centre of Toronto for the poor souls who have to drive all the way to the 401 or Gardiner to find a freeway. Oh wait, they aren't poor souls. They are rich in fact if they are lucky enough to own property in central Toronto where streets are calm, leafy and property values are insane....far from any freeways. Funny how that works.

Hamilton has a stunning ring freeway network now. So stunning in fact, it's quicker to take the 403-Linc-Red Hill to reach the east end from Westdale instead of using this gross Main St freeway. If Main was a proper city street like these renderings show, it would be even quicker to use the ring freeway. If people don't want to use our nice highways, let's turn them into linear park space for local neighbourhoods.

I have been living in the Annex since May and the pedestrian experience is brutal, far worse than Hamilton.

Those leafy residential areas you mention are packed with SUV's which barely slow at stop signs. Even when they do stop, most drivers "encourage' pedestrians to increase their walking speed by entering the intersection soon after you've started crossing.

Curiously enough, I feel safer walking on Bloor St than in the residential areas. The reason? Lights that are timed so there are gaps in traffic.

Even if it's easier to cross, that doesn't mean it's safer.

They can take the ring highway

waterdown has growing congestion on dundas street during rush hour. if main street in downtown hamilton is the solution to moving high volumes of traffic at high speed through downtown areas i think the time has come to turn dundas street into a one way west bound highway. after all, highway 5 is an important intercity truck route. we can twin this with making parkside drive one way east bound. think of how well all the businesses on dundas street will do with the same amount of cars traveling way faster in a single direction with limited parking and reduced pedestrian activity! let's get on this! let's save waterdown downtown! after all, i have a right as a citizen of hamilton to drive as fast as possible through any community. i want to be able to get from clappisons corners to burlington in 5 minutes.

This is why we are So embarrassed to Show the Main Street West Vehicle Tidal Wave http://www.youtube.com/watch?v=Ljvc-BxtD...

Sigh. Your sarcasm is neither intelligent or appreciated.

I thought the gaps in traffic was so pedestrians can cross the street safely. But you know that, you're just trying to get your nonsense to cover up the truth.

Who would ever use an "entrance" off Main St? Nobody walks on that wind tunnel!