On October 26, 2012, I met with the regional manager and the store manager of LCBO #571 (Jackson Square, Hamilton). The meeting was based on several comments I registered over the past few months via their general customer service channels.

Leading up to the meeting, I issued a call for comments from local residents though email, social media and on Raise the Hammer.

The response to this survey was overwhelming: 130 replies were collected, and almost every response included personalized lists of product requests. Many also included detailed commentary.

The care that went into these responses demonstrated that there has been a pent up frustration with the Jackson Square location among many community members.

At the meeting, we discussed a lack of selection, a lack of space and we also touched on the effect of this location on the community. Both managers were very open to the discussion and recognized all of the issues.

There was a hint of defensiveness at times. The store manager in particular felt that she was working as well as she could within the physical limitations of a tiny store in an urban mall with no storage and no dedicated loading area.

I presented a hard copy of all survey responses as proof of a demand for better selection, and both were pleased to receive the information.

Rumours of a new store opening in Jackson remain unverified: both managers claim to have no knowledge of such plans, but they admit that store openings form no part of their responsibilities, so they could not rule the possibility.

Exactly a week after the meeting, the local store manager sent me this follow-up:

I wanted to give you the heads up that we have recently listed 9 new craft beers for you to come in and check out. I have listed Boneshaker but it is back ordered at the moment. Amsterdam will deliver as soon as it is available.

Hopefully you will find one or two that you haven't tried.

Get the word out!!

Have a great weekend!

I dropped in to the store today and captured this photo of the new section. It is on the small side, but it is a great start and it serves as proof that the management is interested in its customers' desires. 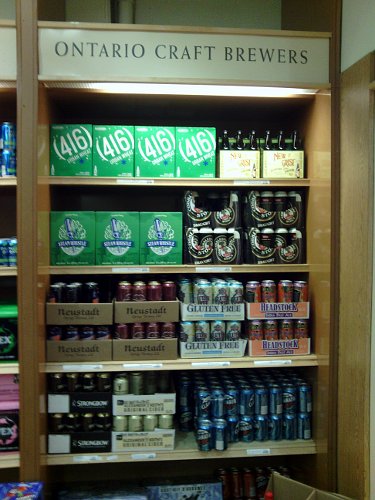 I am hoping that the other issues we discussed will be taken to heart as well. We all agreed that the ultimate solution is a larger store with a proper street presence. If the community continues to express its desires, perhaps we'll see these bigger changes.

In the meantime, I have set up a contact form that will allow anyone to easily send comments, questions and product requests directly to Kim Belliveau, the manager of the Jackson Square location:

Steamwhistle! A toast, to the little victories.

Thanks Sean! I tested out the 416 for the first time and it was pretty tasty. I'm glad to see a move in the right direction.

I'm a fan of the Headstock - finally some hops!

The bottom few rows are still the same-old-same-old. With enough action maybe we can get the entire column converted to micros. I'd like to see some flying monkeys in there.

Agreed on the lower rows. Strongbow and Keith's kind of stretch the OCB envelope.

Still, it's a start, and the segment should be a natural direction. A quarter of the stock in that LCBO seems be beer, and it's constantly being topped up, so presumably the customers gravitate to casual refreshments more so than spirits.

Weird that they didn't move the Mill Street over instead of some of those.

New Grist is another that's possibly CB but not so much O. Still -- who'd have predicted a selection of gluten-free beers at King & James?

Great to see that they actually replied with some action. I'm pretty surprised.

As customers, the best way to ensure that the local shelf expands would be to empty it regularly. Would you drink more beer so you can drink better beer?

What would be ideal would be to do some dealing with the new grocery store - they'll have a loading dock, obviously, and an LCBO storefront near theirs (whether their internal or external entrance) would have obvious synergy. Plus it's not like there's a shortage of available storefronts in that part of the Jackson Square.

Here's an interesting candidate: 6,335 square feet, which is probably a workable size.

This is the building between the HPL and Copps, with frontage on York.

Maybe not great proximity to the Sally Ann across the street a ways, but sited between the Farmers Market and Oceans Fresh, it seems like the best option in the mall.

The next largest space Yale has on offer is the old Ardene space, which is 3,800 square feet.

I think they'd still want a location on the inside of the mall, as opposed to facing York, for accessibility reasons.

I'm sure there is space for them, it just might require moving some existing businesses and opening up long-abandoned spaces to make it happen.

Agree that there are lots of options but IMHO few spaces that satisfy the end goal of "a larger store with a proper street presence." For all its streetwall JS has limited functional access.

You could move the retailer just east of The Honest Lawyer, you could take over the Old Druxy's run just North of the Desjardins Credit Union, you could annex the clothing store, the Grand & Toy and the newly relocated Joseph's... or you could just renovate a large vacant space on York and improve the mall access.

It might be moot, really. The LCBO's comfort zone on new stores seems to be big box. My impression -- and I'd love to be wrong -- is that the more compact "urban format" stores tend to be sited in areas with high-density residential populations.

It always bugs me how so many Jackson stores have street frontage but don't present anything to the street. I guess the problem is that it means designing a store with no back room - the Grand & Toy's street entrance is super-awkward (do they even have one anymore), so I can kinda see why so many don't bother with it.

It just sucks waiting for the buses there and seeing nothing but a wall of shiny black windows. I wonder how much of this has to do with the commerceless commerce-place and the other big office-buildings leaving the block of King from James to Bay as kind of a street-retail dead-zone.

I'm just always surprised with the giant mob of student commuters waiting there that we don't see so much as a hot-dog stand.

I'm to understand Vranich is making a fairly large commercial space with his new development, and wanted to see if he could court an LCBO to the locaiton. If you pass by the building, I suspect his current pay lot at the corner of main and Bay is where I would assume he might be intending to put said development if it came to fruition.

I know I'm going to go there on the weekend and pickup some Neustadt and some 416.

For better locations, how about that corner space at the Lister Block? Or the former Shoppers Drug Mart on James north?