Watts Behind the Door 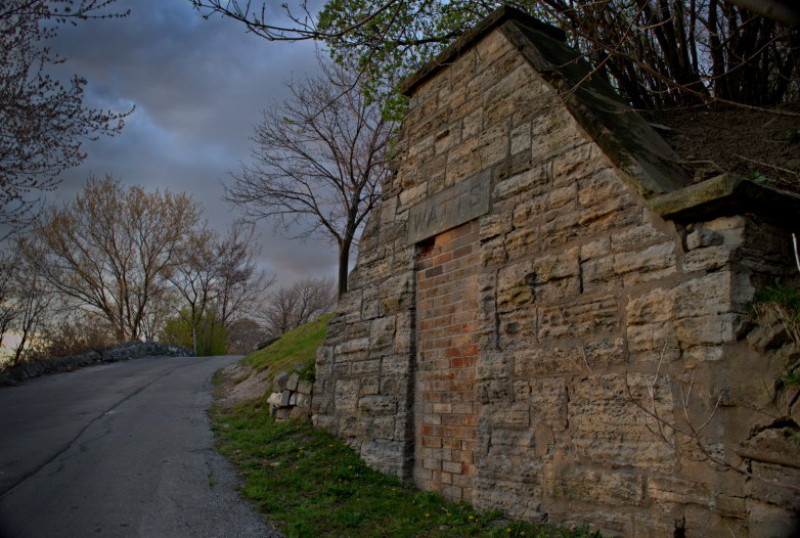 Watts behind the door?

Wagley, my dog, discovered a hole in the fence separating Kay Drage Park from the railway tracks and it was large enough for both of us.

I was about to return to the other side, when I noticed what appeared to be a path. That brought us to the bottom of Hamilton Cemetery.

After we climbed the roadway to the top, I came across what appears to be a sealed door leading into the earth and it had the name Watts above it. I didn't notice any other information as to who or when Watts was.

You have my curiosity itched!

It's an old family Tomb with a newer bricking of the old "door" and it's built into the old tunnel from the War of 1812 that runs through the cemetery, under York Blvd. to Dundurn (though it predates the "castle"). Dundurn was where many soldiers were billeted in the old barn and older (no longer standing) residence that existed before Sir Alan MacNab had his home built there.

There are a few other tombs built into the burm - near the main entrance of the cemetery - including the Tuckett family tomb. Tuckett was the "Tobacco Baron" that had the Scottish Rites "Castle" built (King/Queen)...that was the family home - AND he had his own Vaudeville Theatre built into it!
Have a close look at the Tuckett tomb and the one next to it...Tuckett's seems to be covered in a layer of soot, while the one next to it is not.

Awesome. I like this idea of question and answer pieces. :) What a quick response!

I overheard a younger couple on the bus the other day asking one another if they had explored much of Hamilton. The woman had done a lot of touring when she lived in Toronto but hadn't done much yet around Hamilton. Her male friend had.

To think I have lived in Hamilton 36 years and there is likely a substantial amount of space yet to be explored within our municipal borders and lessons enough to last a lifetime of learning something new every day I bet.

Thanks for the photo and the question, Sean. And thanks to the curious pooch too. :)

Cool piece and response. Exploring Hamilton is lots of fun (on a bike).

I myself am more curious about the larger and more splendid mausoleum built into the side of the hill in Dundurn. It's not on the road and has a window in the back that can be looked into, but the door is bricked up and I don't believe there is an identifying name above the entrance.

It's full of zombies. If you put your ear to that bricked up door you may hear the sound of them scratching on the other side trying to escape.