Merulla to Ask Council to Cease Action in Building Stadium

On November 3, Ward 4 Councillor Sam Merulla announced his intention to introduce a motion calling on Council to "cease any further action in building a new stadium" for the Pan Am Games and the Hamilton Tiger-Cats. The City's current proposal involves building the stadium at the CP Rail Yard near Aberdeen and Longwood.

Now the motion has been posted to the City's website [PDF link] for inclusion in the agenda for the December 15 Council meeting (under Notices of Motion, section 8.1).

The project is under-funded by somewhere in the range of $70 million. The Federal government has stated that it will contribute no additional money beyond the commitment it already made to the Pan Am Games, and private sector partners have not stepped forward to help pay for the Stadium.

The Ticats have offered $8-10 million in capital costs toward the stadium, to be paid over ten years and are willing to manage the stadium operations in exchange for an annual $300,000 management fee.

The Ticats also plan to buy a parcel of land on the CP Rail Yard to build a 150-room hotel, conference centre, restaurants and other businesses as part of a "stadium precinct". 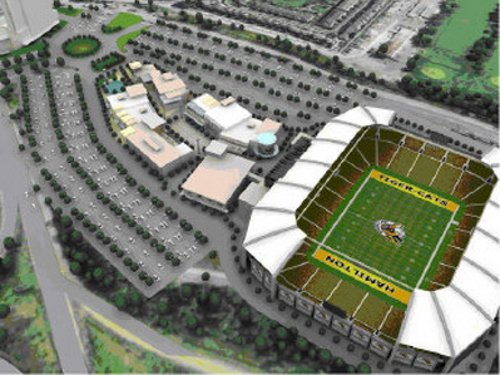 Councillor Merulla has been a steadfast opponent of the City's plan to use $60 million of Future Fund money on a Pan Am stadium and velodrome, saying the debate has been "fueled by emotion and based on wants rather than needs of our community."

According to Merulla, "a number of councillors have expressed support" for his motion.

Update: Councillor Merulla clarified in a follow-up email to RTH that the motion will not be debated at the December 15 meeting. "It won't be debated today. It is a notice to be debated at our next council meeting."

"The City's current proposal involves building the stadium at the CP Rail Yard near Aberdeen and Longwood."

Isn't the current plan still the West Harbour? I know that's (most likely) not going to happen but, to the best of my knowledge, that's never been voted down.

I believe at the last COW meeting the instruction to staff was to move forward with the CP lands as the assumed location.

Good thing the community put so much effort into showing support for the west harbour! Only to have the decision later overruled by... randomness..?

Well I'm a huge TigerCat and CFL fan but I am also the first one to agree that if the stadium doesn't make enough sense to enough politicians in this city at whatever location that works that also works for the TigerCats, then the stadium should be cancelled. The city can tell HOSTCO that Ron Joyce Stadium is fine and if they don't like it, well then that is that.

I agree the stadium is a bust, but I hope it doesn't affect the velodrome that's supposed to be built along with it. One of the items on tomorrow's agenda is the receipt of a letter from the president of the international cycling union, basically saying "if you build it, we will come." And not only that, but build it with legacy use in mind. This has potential to be a bigger tourism draw than a handful of CFL home games each year.

Lets not throw the baby out with the bath water.

Cycling is popular no question and a velodrome wouldn't cost what a CFL stadium would and over time could even outdraw events like a national Grey Cup Festival for bringing dollars spent in the city. I'm not a cycling fan myself and probably will never see the inside such a facility but most definitely it could help Hamilton if it's in an appropriate area. Wishing the best for this for you cycling enthusiasts out there. Hope it gets done for you people.

How often can a velodrome make money? What's the cost? Can Mac stadium, or Ivor Wynn be retrofitted? Who pays, who benefits? Is such an idea any more viable than the football thing? Or is it just provincial funding (my taxes from another pocket) that makes it go. I'm dubious.

In retrospect, i hope folks learn a lesson - when there's a pile of dough sitting around there is an endless supply of vultures trying to grab it. Why is it sitting there at all when we are nearly half a billion in the hole already (and a pile of repairs needed)? Upon which we pay interest at higher rates than what we make on the Future Fund?? Am I missing something?

Yeah Sam. Kill the stadium put us all out of our misery. I've never been in a velodrome, but those I know in the cycling world have sold me on its value to Hamilton.

Do they have Canadian cycling championships BTW and what is attendance like at these? What are they looking for in terms of seating capacity at the velodrome? And do the events get national TV exposure like all CFL games get and huge exposure for a Grey Cup ie. 5-6 mill viewership range? Just wondering as I've never seen a cycling event in an indoor facility even listed in the lineup on TSN, Sportsnet or The Score. But I suppose there must be some sort of large national cycling festival or international that Hamilton would benefit from. I suppose they would need the facility to accomodate at least 15,000 fans if these events are that popular. I don't know. Like I say, I've never seen one before except at the Olympics.

The velodrome was/is never intended to be on its own a profit generating center. For that matter neither is the stadium. They were/are both intended to leave a high level sport infrastructure legacy in the community. What the community does with them after that depends on the different stakeholders that will utilize the facilities. In the case of the velodrome, it could see Hamilton build on its reputation as a great cycling community and become THE place to train for Canadian cyclists. The stadium could have /would do the same thing for soccer if done right. However in the West Harbour Stadium site one of the stakeholders decided to hijack the proceedings at the eleventh hour with protestations that it could never be profitable there without providing ONE SINGLE verifiable reference to substantiate that claim. Now they have gotten as close to what they wanted as they were going to get and now that could still mean NOTHING, NADA, ZIP, ZILCH.

This motion solves nothing. It basically says that we need to keep the staus quo but no matter what side of the fence you are on, we can all agree the status quo as it pertains to the stadium does NOT work

The Cats will likely continie to struggle financially and the city will continue to drop large dollar amounts into a 80 year old stadium. This situation will not magically solve itself down the road.

The city needs to either:

-Bite the bullet and built a new stadium for the cats

-Tell the Ticats that the city can no longer provide them with the facilities needed for them to be financially sustainable. The Cats are free to make their own deal elsewhere. The Cats tear down Ivor wynne and eliminate those costs

I keep on wondering where this 80 year old stadium myth comes from? The only thing there that is 80 years old is the ground on which the facility sits.

A $45 million reno looks good to me at this point!

[sarcasm] IWS's location can be improved by converting nearby Cannon and Barton streets into one way expressways thereby increasing access and visibility. [/sarcasm]

How come Ottawa can do it properly while we turn our back on our beautiful West Harbour?

Wish the Hunt group would talk to Bob Young.

The nearest velodrome is in London (the Forest City Veledrome), I know many who ride there. It's tiny. We could do a lot better, and it would certainly gain us a kind of notoriety that another football stadium wouldn't.

Any faith I had in a new stadium was quashed when I recently read in the Spec about the upcoming need for major work on Copps. These things are money pits, and taxpayers shouldn't be on the hook.

"I keep on wondering where this 80 year old stadium myth comes from? The only thing there that is 80 years old is the ground on which the facility sits.

A $45 million reno looks good to me at this point!"

OK Ivor Wynne may not technically be 80 but by todays standard it may as well be. We live in a world where the Skydome, once the beacon of technology, is considered obsolete. Copps Coliseum, only 25 years old is considered ancient.

A $45 million investmant over 20 years (2.25 mil/year) will not buy us as much as we think. Don't we already drop something like 1.5 a year on Ivor Wynne? Will there be anything tangibly different that new new generation of fans used to cup holders and in-stadium restaurants notice or get excited about. Also remember that Bob Young hates Ivor Wynne's location. I'm saying it's fair or he's right but that's the reality.

We need to ask ourselves- "will a $45 million dollar reno really solve this problem?". I don't think it will. It may calm it down for a few years but it will rear its ugly head again.

Premier McGuinty was on CHCH last night and made it quite clear that the 50-70 million underfunding for the current stadium site would not be covered by the Provincial government.

I'm still confused why nobody's trying to get the province to put the same financial committment they had for the new stadium into the old one. These big 9-figure numbers people are throwing around could buy some comfier seats and better parking at Ivor Wynne.