Ted McMeekin, the Liberal MPP for Ancaster-Dundas-Flamborough-Waterdown, just confirmed provincial support for the City of Hamilton's choice of a Pan Am stadium location.

In an email to RTH, McMeekin wrote, "The Province is committed to a Pan Am stadium for Hamilton and will support whatever decision the City Council, in its infinite wisdom, finally makes."

He noted that in his personal view, "the 'legacy' is the stadium itself," adding, "any stadium should be built with the entire community in mind and not any particular stakeholder in the community."

This is the strongest signal so far from the Province that the City is not simply a hostage to the Hamilton Tiger-Cats in terms of meeting the Pan Am Hostco requirement of a "legacy use" for the stadium. 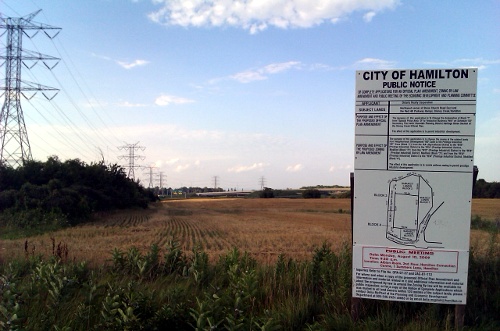 The Hamilton Tiger-Cats argue that Hostco will not fund a Pan Am stadium in Hamilton without having the Ticats as a confirmed legacy tenant.

McMeekin weakened this argument by noting, "surely any other municipality wanting the Pan Am stadium site (in place of Hamilton) would have to jump through the same 'legacy' hoops as some seem to assume are in place" for Hamilton.

McMeekin's statement comes just after the Future Fund Board of Governors voted against spending the Fund money on an East Mountain stadium that would not meet the Fund's goals.

Update: this story has been picked up by CHML 900 AM.

The 'legacy' will be the stadium, the multiple condos built by Molinaro and Rakovic (sp?), the cleaning up of the toxic dump sites Mr Jelly continues to find, the new businesses, shops, restaurants and the greatly improved image of 'steeltown' across Canada anytime TSN shows a panorama of the harbour or skyline from that wonderful location. Throw in a bunch of TO folks coming for Labour Day, concerts and Pan Am events who will surely marvel at the beautiful waterfront and 'real city' they never knew existed behind the smokestacks and suddenly Hamilton can be taken seriously when promoting itself in the GTA or across Canada. That sounds like plenty of legacy. Certainly it's more legacy than whether one can see the CN Tower on a sunny day.

this means Ian Troop, ex-TiCat, might not have as much say as his tune about Ti-cats being a necessary partner suggest. Either that or his words were only ever a spur for the city to get its act together, whatever the site. He mentioned the Ti-Cats as legacy partner only when it was assumed they would play there. Since Bob Young's pulled his hissy fit the only news of Ti-Cats equalling legacy partner has been hearsay.

All of this makes sense. Another site would have to get a business plan together and find a legacy partner in a very short time, and see what happens when you hastily choose a site without doing a thorough assessment?

This is huge news. The threat of losing the provincial funding for the stadium and the Pan Am games has just evaporated. There goes a key Ticat argument out the window.

It really looks to me like the Province just doesn't want to get involved.

Someone's gonna have to make this decision at the end of the day. And whatever choice they make, it's probably really gonna hurt this fall.

The really sad thing is that the most logical choice - just not bothering with a stadium at all - will be the hardest one to make.

It seems to me that McMeekin just drove a stake through the heart of those wanting the West Harbour. He is saying that the stadium is the legacy and there is no stadium without a tenant as far as I can see. He also stated that the 'whole' community must be considered (i.e. the east mountain); not just 'one stakeholder' (i.e. the West Harbour). How anyone can read support for the west harbour alone in his comments is puzzling to me.

If the legacy is the stadium itself, then there is no guaranteed tenant required to provide the legacy, which is what the 'Cats have been arguing.

The "whole community" is the city as a whole, not the "one stakeholder", which is the team, which is refusing to co-operate.

His comments have basically told the city that the 'Cats threat that if they don't play there's no provincial money for a WH location is groundless.

It takes some pretty serious spin to show it any other way, but kudos for the effort.

here's what I can't wait for - the city chooses WH, then the Cats have to decide whether to stay at Ivor Wynne or move to WH. That will be a great day to watch. A shiny new park with stunning views over the harbour and downtown or good old IW. What will the Caretaker do?

The Ticats won't have a choice. Once the new stadium is built, where ever that may be, IWS will be demolished.

Had to chuckle at the GoEastMountain's "Stadium Fact of the Day", which is as follows:

Stadium fact of the day Posted by admin in Uncategorized on July 28, 2010

The East Mountain Stadium is approximately a 13-minute drive from King & Wellington in downtown Hamilton. (ummm, maybe if you were the only car on the road, but when there's 5,000 other vehicles all trying to access the same off ramp, not so much!)

BMO Field in downtown Toronto is an approximate drive time of 17 minutes from Yonge & Bloor Streets. Would BMO Field be considered a “suburban stadium site” as some have characterized the East Mountain Stadium site?

LOL, so apparently it's the drive time, not the location that makes for a suburban stadium!? WTF??

To answer their question: Of course BMO Field wouldn't be considered a "suburban stadium site", you idiots - it's located in DOWNTOWN Toronto!

Go on Mr. Young, keep 'em coming! If nothing else, they're good for a laugh!

Not to mention the fact that it sure as hell won't be 13 minutes on game days.

that trip is NEVER 13 minutes. crazy 'fact of the day' for sure. they are grasping at straws when they're trying to compare the EM site to the EX grounds and BMO Field. LOL

McGuinty and the province have to face a large portion of the blame for this fiasco.

If we had LRT funding confirmed - like we were promised years ago - we would not be having this conversation.

Also, the East Mountain site is provincial land that has to be sold to the city. Again, we would not be having this conversation if the province just assessed the east mountain stadium site against their own places to grow legislation.

I could totally make it from king and wellington to the west mountain in 13 minutes. Wouldn't be particularly safe, though, or legal. And would probably have to be done at midnight.

On a game day, I could probably do it in just a little more time, riding up the shoulder of a packed highway on my bike.