The attack on the designated City Hall is underway again. This time, Councillor Lloyd Ferguson is leading the charge to re-clad the building in concrete rather than in marble, which is a designated feature of the building. 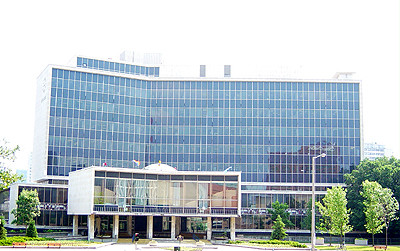 The building is clad in White Cherokee marble from a quarry that is still operating, and still supplying the very same marble that City Hall architect, Stanley Roscoe, personally selected when he designed the building in the mid-50's. The quarry has been operating since 1884.

As recently as noon yesterday (October 14, 2008) Lloyd Ferguson said, "We have never had a quote for replacing the marble." That quote was read into the public record one minute later.

The premium for marble over concrete is said to be between $6 and $8 million. These numbers need to be investigated. So too do the reasons it took until 24 hours before City Council votes on marble or concrete to come up with a cost for marble. It gives neither Councillors, nor the public, time to make an informed decision!

Councillor Ferguson seems to know a great deal about concrete, and very little about marble. After all, by his own admission, he just learned of the costs of marble at noon yesterday. He's the same Councillor who says that a green roof is out of the question. I wonder if he ever got any real estimates about what a green roof might cost.

I urge you to attend the Council meeting tonight where Councillors will be casting their vote either for marble, or concrete. It starts at 7 p.m. in the Albion Room on the 2nd floor of the Convention Centre.

Believe it or not, immediately following this agenda item, Council will be debating Minimum Property Standards for the Maintenance of Heritage Attributes of Designated Heritage Properties Under Parts IV and V of the Ontario Heritage Act. This is a pretty blatant example of do what we say, not what we do.

We need your help to save one of the best examples of mid-century modern architecture in Canada!

Dave Kuruc is co-owner of Mixed Media, an art shop on James North. He is also publisher of H Magazine, a monthly magazine dedicated to celebrating Hamilton's beauty and charm.

For years I've maintained that the people running the city hav a serious hard-on for concrete. If given their way, everything would be covered by a nice drab, uniform gray coat of the stuff. Red Hill valley? Concrete. Lister block? Better rebuild it out of concrete. New McMaster entrance? Concrete. Farmland on the city's periphery? Concrete. Hell, they're even leading a crackdown on those who dare to paint on the stuff (anything other than drab gray, of course).

Ferguson, with his career at Dufferin Construction would certainly know.

It's nice, for once, to see these guys leading by example.

I don't understand - what happened to the option to use limestone? It was offered as a choice on the mayor's website. Why is limestone out of the picture?

iliafer, I second the sentiment. Limestone seems like a nice price compromise, and one, moreover, that would be well suited to the climate here. It's the option I voted for, and I'm disappointed to witness its mysterious disappearance from the table.

I voted for limestone as well. As an aside...one of the bridges, I believe the Greenhill bridge has grey brick....does that make it better? I'd love to let graffiti artists go nuts if they didn't use gang symbols or hate/offensive slogans. Like the wall on Sonic Unyon.

It is bizarre that limestone has not made it onto the EcDev and Planning Committee's radar screen. Obviously the Mayor believes it's still on the table. In any case, it's been deferred.

Although I'm not sure what sending it back to a pro-concrete committee is supposed to accomplish. Maybe they can figure out whose a** that $6-8mil figure came out of.

I'm sorry I wasn't able to attend the meeting. Any details Dave?

I thought this was quite funny...

The quote of the day on my Gmail header today was:

"Our national flower is the concrete cloverleaf" - Lewis Mumford

I attended the official opening of the "new" City Hall as the guest of outgoing Alderman Sandy Murdoch although I believed then, and still do, that we should have utilized the "old"
City Hall as we have the old Library. During the pomp and cermony of that opening day our Marble Facade was much admired as providing an unique turn in Hamilton's architecture and when the marble slabs began loosening and when one, maybe two (?) actually fell and the naysayers began calling for removal of the marble, arguing that the cost overshadowed the retun on investment.The people of Hamilton let their voices be heard and argued that ROI cannot always be measured in dollars and so the marble remains. Now we have cement and limestone advocates prepared to fight it out in City chambers with no regard for history or culture. I believe that we once again should listen to the voices of the people and take it to a referendum and out of the realm of incompetent Council buffs.

I prefer marble, but would be happy to compromise with limestone, which has some practical, structural advantages if it is not as aesthetically pleasing as marble. But the issue is metaphoric too, of course: "What to do with city hall."

As for all the concrete, I blame the Romans.

Actually, come to think, I'm kind of surprised that concrete can't be tinted and polished to look more like marble than marble. Concrete gets used for kitchen countertops these days. Marble, still more costly and preferred, is relatively soft and absorbs stains. Maybe our minds are closed on this one?

I read in the Spec this morning that a 2005 engineering report said that 85% of the marble was in good shape. Re-use of exisiting sound material seems like a good idea for all kinds of reasons.