The Hamilton Grand will be built at the southeast corner of John and Main, the site of a former Shell station, with slightly larger floor plates.

The Hamilton Grand surprise was revealed on Saturday at a lunch reception at the AGH. Two weeks ago Stinson hinted that there was going to be a change to the current proposed building.

The reception was full to capacity with standing room only. From a show of hands, half the attendees were from Toronto with a few from Montreal. The majority were members of a Toronto based real estate investment group called Private Investment Club.

The investment group has bought 100 of the 176 suites. The benefits of the massive purchase will push the Hamilton Grand to be constructed starting this summer.

Problem: The current building lacked the grand presence that Stinson prefers in his buildings.

The Hamilton Grand will be built at the southeast corner of John and Main, the site of a former Shell station. The design is similar, except with slightly larger floor plates. The floor plans now have 22 units versus the previous 20. 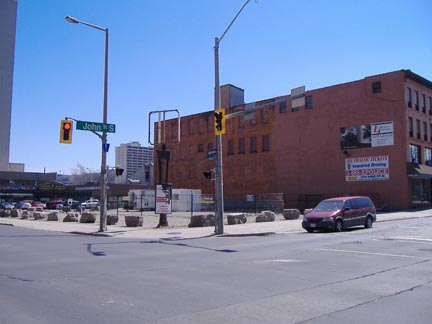 New location of the Hamilton Grand. Southeast corner of John and Main Streets.

The building will now directly greet visitors to Hamilton when they enter the downtown from the 403 and Main Street. The new building will have a much bigger presence compared to 27 John Street (almost directly across the street), because it won't be concealed behind the John Sopinka Courthouse.

The new lot is 40 percent larger and one third cheaper. Another bonus, aside from the obvious added exposure, is that the former owners will have to dig and remove the contaminated soil and under ground storage tanks, leaving the hole already dug for two and maybe three underground parking levels.

Several speakers promoted Hamilton as a great investment. Larry Di Ianni, former Hamilton Mayor and Stinson's business partner, spoke about Hamilton's renaissance. David Adames spoke about how the Art Gallery of Hamilton renovation was the catalyst that had started a renewed interest in downtown. Councilor Bob Bratina also showed his enthusiasm in a speech about Hamilton's great history and location.

Stinson has been hot on Hamilton since moving here and commented about the unrealized value of the downtown.

One peculiar moment was when former Mayor Jack MacDonald entered the room at the time of everyone saying great things about Hamilton. Stinson introduced MacDonald to the attendees. Stinson asked MacDonald, "when were you mayor?", to which MacDonald responded, "When Hamilton was ambitious".

There was an awkward brief silence after the strange remark. I could sense that people were thinking, what did he mean? Did he just say Hamilton is no longer ambitious, and Hamilton lost its ambition in 1980 when MacDonald's one term ended?

Stinson quickly ended the silence by tactfully getting back to the theme of the event: how Hamilton has great potential. He said, "Hamilton could be the most interesting city in Canada."

The afternoon was full of enthusiastic and confident investors. The new location fills an empty prime visible lot with a wonderful new addition to Hamilton. Let the renaissance continue.

Thankfully, Stinson sees the brutal blight that is the current lot, with great potential to house a wonderful building.

It doesn't surprise me that the Crazy Horse Saloon owner didn't return calls and didn't negotiate with Stinson. Hamilton is full of long-time property owners downtown who have zero vision and are content to own rotting properties until the day they die.

Thankfully, Shell Canada isn't one of them.

Great move by Stinson. Next move needs to be shovels in the ground.

Sounds great! When are they breaking ground now and what about the old site?

Nice to see early adopter developers starting to take an interest in the future LRT route along the B-Line!!

There will be a new homes sales office in 30 days on the site.

Shell will first begin to clean the property.

The remaining suites are expected to be sold in 60 days.

Digging out the soil and removing the storage tanks. They will leave the hole for Stinson to begin building the parking garage. Aso saving money for both Shell and Stinson, because Shell won't have to fill the hole and Stinson won't have to redig the hole.

The Crazy Horse location (27 John) remains in the hands of the owners. I don't know who they are. Stinson will not close on the property. The rental agreement for his office ends on the 15th. The owners 'decided' to negotiate with Stinson on a price, the 10th, the day before his announcement. Just a little bit Too late. I guess they thought he was bluffing about the Shell location.

absolutely! You'll see King/Main lined with developments like this once LRT construction starts.

I don't want to interfere with people's 'stream of consciousness' on the side-bar issue of land negotiations. But just for the record, before people's motives are criticized. There were two owners on the former Grand site on John St. (so-called 27 John even though it was more than one address). One owner had the former Liaison College property and he is a local person. The other was an ownership group from Toronto and elsewhere, I understand. The Liaison College owner is a very responsible and honourable gentleman who made a deal and wanted to assist the development. The Toronto group was not realistic about their property and didn't come to the table until much too late.

Nevertheless, the new location is a great one. Once this project is complete, it will help out all the properties in the area as well as provide much needed hotel space in the city.

Thanks Larry for the clarification.

I'm happy the owners from Toronto (27 John) came too late to deal. This new location works out better for Hamilton and Main St. And obviously the benefits to the project.

It's clear ex-Mayor MacDonald's dimentia is kickin' in... poor old guy.
I remember him yelling out, "What's wrong with our Trollies!?" at an LRT Meeting in May 2008.
I'm curious, Jack... what would you consider 'ambitious'? The Gore Park Chainsaw Masacre? Politically blocking the RHVP as Mayor, then lobbying to have it named after yourself when it's finally built?

Mr MacDonald... why do you still exist!?

why would Jack MacDonald be at an LRT meeting?? LRT usually results in CONSTRUCTION. That's the opposite of DEMOLITION.

Methinks the comments are straying a bit off topic...

While I'm sad to see nothing will be done about the Liason/Crazy Horse property (specifically I'm sad for the Liason college local landowner who lost out on this opportunity because of the Toronto company that shares the address), I'm glad to see that something is being done in a much more high profile location. Kudos to Stinson for getting the deal done. With so many units already sold it's clear that this will be going ahead.

I just hope they design the main floor to be integrated into the surrounding area and present a friendly "streetwall" on all sides. The rendering so far looks promising.

While this excites me, I hope that the final design takes some hints from RTH regarding a welcoming, inward facade.

A courtyard would be an interesting idea.

I hopw this dope Stinson can pll this development off. If he doesn't - he should no longer be taken seriously by anyone in Hamilton.

"I hopw (sic) this dope (sic) Stinson can pll (sic) this development off." Really? I kinda think you hope he doesn't pull it off so you get more to crap on.

Seriously, Stinson has such a shady record that if he doesn't just build the damn thing he'd better go looking for another city. Stop adding floors and trying to build too pie-in-the-sky. I mean come on, who thought the silver pyramid was really going to happen?

Not sure where else to post this, found a 'new' condo development by Linktack Architects in an empty lot just up the street from The Grand at Young & Catharine. Not sure if this is just an idea or an actual plan?
www.lintack.com/portfolio.php?cat=27&project=351

that project has been on their website for years. I'm guessing it's dead by now.

I heard a rumour that there is some financial issues with the Real Estate Corp who had purchased the majority of the units?

Any solid information to back this up?

This was posted by a commenter on skyscraper:

PIC is the organization that had purchased 100 units for the Hamilton Grand project. Not sure how much it is actually sold (I would guess around 70-80).

Today there has happened an event during the PIC meeting which probably had ended the existing of the PIC as a group. It will be probably announced soon.

I am not going to disclose what has actually happened but most likely there will be people getting out of the Hamilton Grant Project because of that from the PIC side.

Sunil Tulsiani is having some problems so not sure how it will affect the Hamilton Grand Project but just passing the news to the forum.

They still haven't broken ground, and it is now July.

Unfortunately this project has been cancelled. However Stinson still owns the Esso land. According to him most developers experience several 'starts and stops' with development projects. He's still committed to building a hotel in the future. The business model for a hotel/condo -- aside from the other the other problems -- is a complimented sell. For now he's working on the School project.