Recently Mayor Eisenberger suggested that a small stretch of King Street (Gore Park) be turned into a pedestrian plaze. Bizarrely, this suggestion generated some resistance, even from the director of the downtown BIA.

City planning in Hamilton and largely across North America for the past 50 years has focused on private land use.

The city staff members and councils have micro-managed how a landowner can build, what gets built, the use of the land and its buildings and neglected the places that the public occupies. This has been a double-edged sword for city life.

Currently city by-laws and zoning rules stand in the way of a land developer to mix residential, commercial and entertainment uses. The City forces a minimum amount of parking spaces, maximum heights on buildings, minimum setbacks (how far a building must be from the street), and usage.

Ultimately this destroys pedestrian use and makes automobiles necessary to participate in day-to-day civic life. 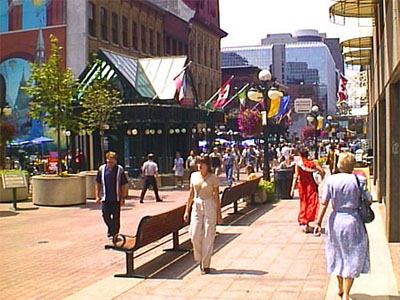 The long-time zoning rules have forced developers into making their lots be used for one purpose only. That is, single unit housing, multiple housing, office, entertainment, commercial, or industrial uses.

Forcing a building or lot of land into a single-function-use is not natural to how people live and function in an urban area. It has segregated the citizens and not allowed a city to naturally grow and evolve into vibrant clusters where people can live, work, shop, and socialize.

An article by Andrew Dreschel in the Hamilton Spectator suggested that people would not stroll a Gore Park promenade because they can socialize and shop at Limeridge Mall. The problem is that Limeridge Mall is private property. One can be evicted for a loosely defined infraction such as 'loitering'.

Public spaces are vital to a community. Gore Park has historically been the place that Hamiltonians visited to celebrate and protest. This couldn't happen at a mall or big box centre that is privately owned. 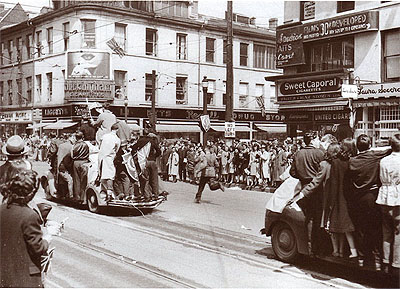 Most of the livable places in the city would be illegal to build today.

Granted, the city is taking small steps forward. Some downtown developments are being built to the street, two-way streets, on-street parking, wide sidewalks.

But the rest of the city continue with the same car dependent environment with huge surface parking lots, five or more lanes of fast moving traffic, and buildings set so far back from the street that they require signs at the street to let people know what's at the back of the parking lot.

Parks, plazas, squares; boulevards and streets with wide sidewalks next to calm vehicle traffic add much to a city's livable factor. People experience a city through the public realm.

Even some city parks don't function very well. Everyone wants them, wants to live near them, but they aren't used very much.

Why? Because there isn't much reason to go them, and if you do, they often lack washroom facilities, picnic facilities, most are barren grass fields, kept green with chemicals, and few trees. 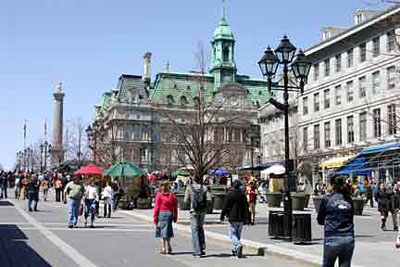 A pedestrian street in Montreal

A pedestrianized Gore Park plaza would meet the requirements of a useful public space – with the addition of public washrooms, something that used to be in Gore Park. It would be a destination, have a reason, and be a friendly place to socialize.

I have mixed feelings on this.I would love to see more public open spaces like Sparks street, but the "people" also define a city.That picture of Sparks street must have been taken at lunchtime.

Driving down King at the city centre near the epitaphs what I see is a collection of farily imnnocent looking loiterers drinking tim hortons with not much to do, to groups of twentysomething unemployed types exchanging money for something in broad daylight.

Being new here I am trying to keep optimistist in the "If you build it they will come" mentality.. but WHO will come?In a high income area/ city like Ottawa sparks street it will attract money and commerce and families for a nice day out to while away some time.In areas that have "challenges" after dark it could become a clearing house for drug dealers down and outers Homeless and more nefarious types.( Note:I have nothing against the homeless and in fact,it is good that they are in our faces to let us all know they are there and exist and are human beings.)We have to be careful how/ where they are designed and what the outcomes will be.

Recently I was at the Toronto Armoury area which is a public space.OMG.Accosted twice for money,yelled at for not giving money,aksed to beat up someone who stole the persons money.all this within the hour

Perhaps the two issues such as more Public spaces and social issues should be handled separatly, but sometimes we create one good thing and create another bad thing.If the public space was public but had some sort of security I would mot mind as much.

A Good example of the reverse is Zurichs "needle" park.Once a well known public park that turned into a shooting gallery in the 90s has been taken back by Families to be a real open space park

get outta your car a walk around a bit. you might like what you see. but then again, probably not.

I saw Kathy Drewitt walking through Gore Park today. I wanted to go chat, but thought better of it.

I should have started yelling and screaming about the lack of parking down there. "how the heck am I supposed to go to the pawn shop and cheque cashing store if there's no mega parking lot at Gore??"

Sparks Street Mall has been a complete bust over the past 15-20 years. The NCC has tried to rejuvenate the mall by building sculptures, luring upscale retailers, etc, but has failed miserably. The entire street is deserted past 4pm when all the federal employees who work in the buildings flanking both sides of the street go home. This may be due to the absence of a nearby residential area since Sparks cuts through the financial/govt building district. The nearest "happening" area is Elgin Street (which is 2-way)- it's packed full with residential units, small shops, bakeries, cafes, pubs, a school, public park, etc. so there's no reason for Elgin streeters to go over to Sparks.

However, with the construction of new residential/mixed use buildings in the downtown core, a pedestrian street mall may work for Gore Park.

First, I applaud the Mayor for thinking outside the box and considering pedestrian malls. The importance, in my view, is not so much the actual solution he is proposing, but the signal that he recognizes the importance of the core and that it must be people friendly and environmentally friendly.

I am a Transformation Director by trade. What I do is help large organizations transform from one state a being, to another desired state. Transformation is not about tweaking; it's about wholesale change.

The key to successful transformation is leadership, alignment and staging. Too often, people have good ideas but lack the alignment necessary to bring them to fruition. Other times, leadership is there, alignment is in a ready state, but the translation from vision to implementation is left to chance.

This is where you need someone who is skilled in carving out the engines of transformation; the core levers that get us to where we want to go. Then carefully staging plans and executing them to incrementally get us there. Along the way, recognizing resistance and mitigating it.

Until we have decomposed our vision into tangible interventions with accountable bodies, we are just spinning.

Is it difficult in an environment where councillors have a dual responsibility to their constituents and to the city as a whole? Yes. Is it doable? That depends on leadership and know how.

But can it be done. Absolutely! How do I know? That's what I do for a living.

I think that all this pedestrial mall talk is just nonsense. If you want to improve downtown convert Main and King to two-way traffic. Both streets are expressways that make the downtown look dead. Streets with two-way traffic look more alive and vibrant - that is what people want to see downtown. Second, get rid of all the bums, Hamilton is not and should not be a dumping ground for every homeless shelter and low-income housing project. We have more than enough already.

Maybe we should do coffee sometime. Be pleased to bounce some ideas back and forth.

I don’t know if a pedestrian mall would be an automatic slamdunk. There are some places where it works and others that don’t.

Sparks Street in Ottawa while busy during work hours is quite desolate on weekends and evenings. The businesses there are hardly the kind that attract people. It has very little life and I know many tourists are often surprised by how empty it is.

On the other hand, I quite like Granville Island in Vancouver. Not a true “pedestrian mall” but pleasant nevertheless. It seems very busy every day of the week.

I do applaud the mayor for trying to think outside the box.