Pesticide By-Law Proves to be Worthless

What did we expect when we passed a law that bans pesticides - except for the reasons that people normally use pesticides?

On October 9, 2007, a pesticide company showed up on the sprawling lawns of Gordon Price and St. Vincent de Paul Elementary Schools and sprayed them with chemicals. On the morning of October 10, a strong odor came from the surrounding fields. 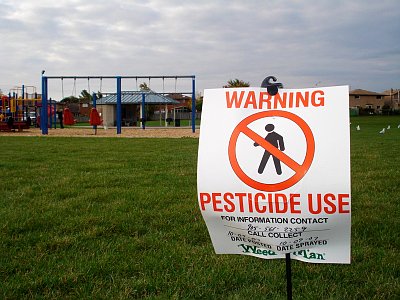 An email request to Gordon Price determined that the chemical sprayed was to control 'weeds'. Weeds are what we call indigenous plants. Kentucky Bluegrass does not naturally grow in our climate without the help of fertilizers and pesticides. The 'grass' that we think of growing on our soil would eventually lose out to the indigenous plants (weeds) that grow naturally to this area and climate.

Last month, in another 1950s manoeuvre, City Council decided to enter the future in theory, but in action remained in the past. Council passed a by-law that prohibits the use of pesticides - except for the reasons that people normally use pesticides.

A person would be in violation if they sprayed pesticide on their cereal but not on their lawns to control weeds or insects. To make sure golf courses were exempt, a blanket exemption of 'public land' was written, which is why chemicals continue to be sprayed on the playgrounds were children take their 'nutrition breaks' for 'exercise'.

On October 10, the children of Gordon Price and St. Vincent de Paul schools were 'advised' by the signs shown not to walk on the grass. So much for exercise that day. 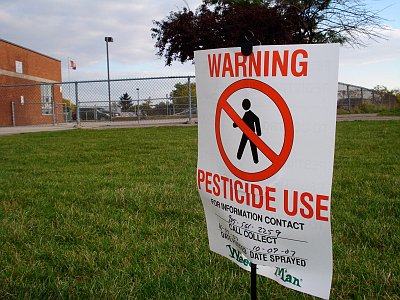 If there was a reason to pass a by-law in the first place (and there is strong evidence for just that), why make it so weak that nothing will change?

Children will still walk on the grass and track the chemicals into their homes, play, fall down, and pick and throw grass on each other. 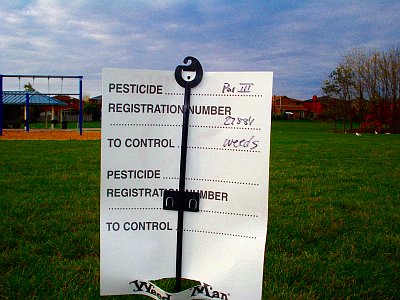 Thanks to Melissa S. for the photos.

There's a simple way to judge the effectiveness of this bylaw (and the anti-idling bylaw):

If the activity is deemed to be common enough, and dangerous enough, that a bylaw prohibiting the activity is required, then the measure of its effectiveness is the degree to which the activity ceases after the bylaw is enacted.

There is no apparent difference in the level of idling, thus, the anti-idling bylaw is a failure.

It remains to be seen what will happen with this bylaw, but from the sounds of it, we may expect similar results.

if you're judging on THOSE grounds it was doomed from the start, that's the wrong way to test this. the important thing is whether council LOOKS LIKE they're doing the right thing. on that score they both pass with flying colors!

By-laws, like any laws, need to be enforced by the government on behalf of its citizens. The municipal government has chosen to educate the citizens before any true enforcement starts. It is disappointing and discouraging that the step to educate people has not begun. I can only speculate what will encourage the municipal government to act on its by-laws. More school children pleading for help during council meetings?

In response to the articale bt Tevor Shaw...on Pesticide use ...the intent was to REDUCE the use and where possible and practical eliminate the ise of Pesticides/Herbicides.

This may be practical on small land masses like the frontlawns of residential homes and small commercial properties....but not PRACTICAL for very large land owners sucj as farmers, sod farms, Golf courses or acres and acres of civic parklands...

The City has come up with what i think is a very PRACYICAL and REALISTIC by-law....that willlead tot he reduction in pesticed usage....elimination which seems to be the ultimate goal of misinformed individuals and some groups....is just not PRATICAL or REASONABLE or responsible from an economic impact to the already overburdoned taxpayers

Practical. What you are saying is a total elimination of a carcinogen is unpractical and/or impossible.

Sort of like only partially breathing asbestos or only smoking half a pack a day. Eliminating a danger is not practical? This by-law won't change anything, just like the idling by-law, they will have no effect on people's health. And for what? Green lawns.

There will be a day, just not today, when an enlightened generation honestly weighs pros and cons of our activities of daily living.

Again a balanced approach to Pesticides and Herbicide usage that leads to REDUCTION...and ELIMINATION where Practical....is a good approach which this by-law addresses and will lead to the pesticide/herbicide reduction awareness and as a result will provide consistentcy in the application of rules and regulations(Provincial and Municiple) to all users.....which is a giant step forward in the REDUCTION of the use.....as noted in the by-law....all aplicators will have to be IPM accredited....in order to apply pesticides....Integrated Pest Management (IPM) promotes the use of Horticultural practices first and foremost....and the use of Pesticides /Herbicide as a means of LAST resort....which in itself ...will force the REDUCTION and use of these necessary (under certian conditions)products...

pesticides and wood are equally dangerous?

So everything is dangerous 'in this day and age' so let's just forget about safety and mitigating any hazardous substances. In fact let's allow lead paint in Canada, let's go back to smoking everywhere, let's forget about leash laws, let's take down all speed limits, let's forget about WHIMIS, That doesn't makes sense. Bottom line is it's a dangerous substance and has no place being on lawns and playgrounds. The benefit of a green, weed-free lawn DOES NOT out way the cancer it causes. Smoking in public and drinking and driving are just two examples dangerous behaviours that have been banned. It's just time now for cosmetic pesticides to go the same route.

I guess we'll have to wait for McQuinty to make a province-wide ban.

My Point was ....there are 100's of products being produced now that have or may have an impact on humans and animals...some of which are necessary in this day and age...

If you actually follow the science of this topic...the jury is out on it's affects....for every study indicating the products safety...there is another indicating it's ill effects...

It seems to me that the largest user of these products is the agricultural community....but every by-law in every city in Canada...has exempted Fariming or Agriculture from those by-laws....as Provincial legislation cannot be over ridden by a municipal by-law....

If a provincial ban was to occur in Ontario....I'm sure Agriculatue will get a "free Pass' as the fod osurce has to be protected to feed the masses.....being Practical.....I understand this....as the crop yield would not sustain the masses if all farming and agriculture were banned from using Pesticides or Herbicides....

This by -law will have a positive effect in EDUCATING homwowners and in fact limit them from unecessary use of these products....there by REDUCING the the amount used ....thereby....REDUCING the potential negative effects...

Again I disagree with the oringional comments....about the By-law PROVING TO BE WORTHLESS

NO THE JURY IS NOT OUT. this is propaganda from the Weedman's of the world. Let's stick to facts.

Epidemiological studies have shown that home use of pesticides is associated with increased cancer risks in children.

Three studies quoted below for your facts.

The Cancer-pesticide link is stronger but there is also evidence for a pesticide-neurotoxin link in young children who are particularly more at risk because their brain is still developing.

Regarding the agri-use. I am well aware of the green-revolution and crop yields. No one is asking that farms stop using it. Only that inside cities, parks, residential lawns and cosmetic use be banned. Dandelions or Cancer? You decide.

The by-law IS useless and McQuinty will have to rescue us from a totally preventable cancer and neurotoxin risk. As for your 'awareness' to reduce the use... just look at the photos in this article... and ask yourself how much reduction is occurring?

you missed the point too. Just because there are 100s of hazardous products in use today, it doesn't change the fact that pesticides are hazardous.

The PRACTICAL thing to do is start eliminating the products and behaviours that are unnecessary.

Show one example where this by-law did any educating.

The city's own staff who answer 546-CITY isn't even aware of the anti-idling and sign by-laws. In fact Municipal Enforcement doesn't know how to act to a by-law that is 'complaint based enforced'. That is, they will act ONLY when a complaint/call is made from a citizen. Just try and call 546-CITY, ask for Municipal Enforcement and make a complaint about a Mobile Sign that has been up for more than 90 days, or tell them a car has been idling for more than 3 minutes outside a school or tell them your neighbour's lawn has just been sprayed by Weedman..... nothing will happen... the city is a joke the by-law is a joke. it's nothing but lip service.

The school administration also had no idea when called about this that there was a by-law. Which there isn't really because public parks are exempt..... useless

Trey....for your information and the FACTS and for anyone eles who needs the FACTS Please visit www.24d.org.......even the World Health Organization agrees !!!!

o look a website designed for the chemical companies and the companies that do their bidding (ie WeedMan), to make sure we continue to consume their poison.

2,4-D was invented during the Second World War solely for military purposes, widespread use of this herbicide on suburban lawns in Canada dates only to the post-Vietnam War period, when the accumulation of Agent Orange's two ingredients--herbicides 2,4,5-T and 2,4-D--prompted chemical companies to seek a lucrative disposal for these synthetic substances after the military stopped buying it to defoliate the jungles of Vietnam.

The International Agency for Research on Cancer (IARC) has classified 2,4-D among the phenoxy acid herbicides MCPA and 2,4,5-T as a class 2B carcinogen-possibly carcinogenic to humans. (IARC monographs on the evaluation of carcinogenic risks to humans: An updating of IARC Monographs volumes 1 to 42. Supplement 7, WHO, Lyon, France 1987.)

Proper application of herbicide protects the applicator, but has no effect on the toxicity of the product. After all, it is meant to be toxic and kills precisely when used as directed.

Concern over 2,4-D is such that it is currently not approved for use on lawns and gardens in Sweden, Denmark, Norway, Kuwait and the Canadian province of Québec. 2,4-D use is severely restricted in the country of Belize. In Canada, well over 135 municipalities have placed bylaws that restrict the cosmetic use of pesticides, including the use of herbicides containing 2,4-D. Include Hamilton in that 135 municipalities, although the city has decided it's okay to spray on playgrounds, but agrees that their use should be controlled -- a rather odd set of values.

"I guess we'll have to wait for McQuinty to make a province-wide ban."

posted November 8, 2007 and guess what happened? McQuinty had to act on behalf of all Ontario because their lame-duck municipalities couldn't and banned the stuff.

k gordon price is an awesome school how come this site has so much stuff against it? :S