The core is cooking! Jason serves up the tastiest treats that downtown has to offer.

(this article has been updated)

Hamilton's International Village continues to hum along in the midst of a remarkable revitalization. More info regarding the 'Spallacci Building' has been released and it looks fabulous. 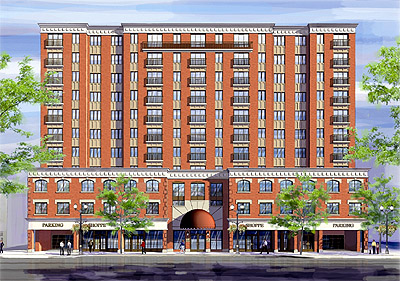 Personally, I'm a huge fan of buildings that capture the heritage aspects of our downtown core. I think this building will blend in beautifully with the streetscape and add another batch of urban residents with plenty of nearby amenities to enjoy.

Let's hope the street level retail spaces are rented to suitable tenants that will animate the street with sidewalk displays or patios.

The city is currently constructing a five-storey apartment building at King and John. It, too, is designed with a great heritage feel and streetfront retail space.

The St Deny's project has been a long time coming. It's wonderful to see it finally take shape and not disappoint with bland architecture or street presence.

These two projects on King East are pointing the way to Hamilton's urban future. Head to Boston or Montreal sometime and check out the plethora of new buildings that are designed to look classical.

Kudos to the Spallacci Group and the hard-working folks in the International Village who have come a long way to make this project a reality.

Further east on King at 316-318 King East, two new businesses are set to open in the same building. Three16 Lounge and Mindstorm Studio will be opening soon and will both be huge additions to the Village. 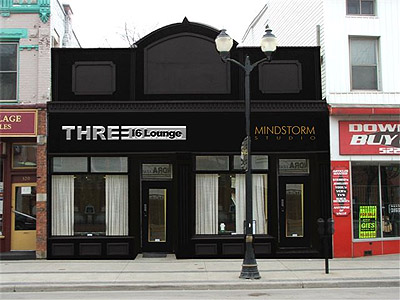 The principals behind the lounge are the same folks who brought us Urbanicity Magazine. The lounge will double as the Urbanicity office and should result in the magazine being resurrected after a bit of a hiatus while renovating this building.

Three16 will have wireless internet, a liquor licence (with 16 premium beers to choose from), and great coffee, and will surely become another hot spot for Hamilton's booming urban population. And get this – there's a fantastic space for an outdoor patio behind the building. They hope to have the patio ready by later this summer. The café will open shortly.

Based on the skill and professionalism we've seen in Urbanicity, Reg and his sister should do great with this new venture. Congratulations to them both. Hamilton's downtown will be better for their efforts.

I'm aware of another web firm, photography studio and artist studios already in the Village. Adding this creative cluster will go a long way towards drawing more similar ventures in the future and lay the foundation for a vibrant, 24-7 neighbourhood in the years to come.

The façade is now redone at the old carpet store just east of Walnut. The word is that a cappuccino bar/ pastry shop is coming.

A sign up on the southwest corner of Walnut and King is advertising a deli/café coming soon.

The folks at the BIA office are pleased to announce that by next month there will be 29 restaurants, cafes and entertainment spots in the Village. The great weather is here giving us a perfect chance to get out and discover this hot downtown neighbourhood.

Several months ago we told you about Speakeasy, a funky little coffee lounge at Ferguson and Picton. The owner of this company has been busy and is now bringing Hamilton's first roasting machine to the Imperial Cotton Centre for the Arts.

Speakeasy coffee is also now available at the Bread and Roses Café on King William, The Harbour Diner on James North, the Farmers Market, Imperial Cotton Centre and of course on Ferguson North. All coffee is organic and fair trade.

Nina's Bistro is now open at Main and Locke. It's been quite busy during its first week of operation.

Also, a new lounge is said to be opening behind Nina's. More to come in future issues.

With summer just around the corner it's time to see what new patios are opening up this year.

Honest Lawyer on King West. This place continues to cram in the customers. Kudos for the nice looking patio and great furniture.

Mahal Indian at the Gore. I don't recall a patio being there last year. Along with Infusions, Chesters and Fingers there are 4 good options for outdoor dining next to our most famous park.

Bread and Roses Café is said to be opening a patio this summer.

The Corktown Pub on Young St will have their new patio open soon.

Not quite a patio, but the Big Sea pub on James North has an authentic double-decker bus that will serve as an outdoor dining room.

The rumour mill has the Ramada Plaza Hotel being renovated into a Crowne Plaza Hotel. Apparently work has resumed on the new conference centre next door in the old theatre.

Demolition of the old Kit Kat building is complete. Construction will now begin on the five-storey apartment building to replace it.

A new athletic/health club is opening in the recently renovated complex at Forest and James.

If anyone wants to own one of the coolest cafes in town, now's your chance: the Bad Dog Café on Locke is up for sale. Just don't mess with that great coffee!

The Downtown BIA finally has a new website: www.downtownhamilton.org. Now let's hope for some of the International Village magic (read: comprehension and hard work) to head west on King.

A new restaurant is opening on King William next to the Bread and Roses Café. Let's hope they also jump into the patio business.

Upper floor renos continue on the building housing the Capri and yet to open Last Call Bar and Grill.

More upper floor apartments have been going into a nice old building on Mary Street across from the Century Theatre.

The Hamilton Chinatown Centre is now going up on Cannon Street West near Park. This will be a fantastic addition to an already-booming Asian neighbourhood. Also, an Asian video store is opening on Park Street across from the T&T Supermarket.

If anyone from City Hall is reading, maybe now would be a good time actually to get around to calming Cannon Street and banning through trucks. Think Spadina/Kensington Market in Toronto.

Of course, I know I just wasted a sentence of typing activity to say that again, but hey, maybe common sense will trickle into the Hall one of these decades.

Finally, this just in from the Hamilton Spectator:

Think of the great downtowns of the world: Chicago. Paris. New York. Montreal. (Toronto? Not quite.) Hamilton? What does Steeltown need to help put its downtown on the road to world class? Two-way streets? Light rail transit to the waterfront? A new football stadium? Foot-traffic only on Hess Street?

The Spectator invites readers to send in any and all comments and ideas on how the downtown should be redesigned. No idea is too small or too off the wall, so send one send all.

Send your suggestions to news@thespec.com. Let's flood their inbox with great visions of light rail, pedestrianized Gore Park and new streetcar lines in our downtown!

Update 2: this article originally stated of the Three16 Lounge, "They hope to be open by the end of the summer." Now it correctly reads, "They hope to have the patio ready by later this summer. The café will open shortly." RTH regrets the error. -Ed.

Update 3: the email link to send suggestions to the Hamilton Spectator was incorrectly listed as "newsroom@thespec.com", but alert readers pointed out this email address was broken. The Spec changed their article and now lists the contact email as news@thespec.com. But we ain't taking the rap for this one. ;) -Ed.

Jason says Terraces on King "captures the heritage aspects" of the downtown core. The rendering of the building accompanying his piece, however, belies that cheerful description. It rather shows a building that is stunning in its utter banality. It is in fact characteristic of so much of the building going on in the core -- and elsewhere. It spurns any hint of originality for a warm and fuzzy quote of a "heritage" style that contemporary architects have little knowledge of and much less experience working at. Result: utter blandness when it isn't just plain ludicrous.
Corbu

you are looking at the first rendering above and not the second right??

I'd like to submit a suggestion to the Spec regarding redesigning downtown, but the email address you provided doesn't work. Will you double check it?

sorry Tim I just logged onto the Spec's website and that email address is correct. hopefully they fix the problem.

By the way, my above reference to the 'second' rendering wasn't meant to speak negatively about the lounge facade. Rather I was making sure that Corbu was directing his comments towards the proper rendering. I see nothing tacky about the Spallacci rendering. Obviously the Three16 Lounge facade isn't meant to be historic. It's modern and looks great.

ok, according to today's Spec that email address is news@thespec.com

Thanks Jason. I saw that, too. It's just like the Spec to confuse matters by having two email addresses.

Jason: I was referring to the Spallaci building.
Corbu

I know...I was half-teasing since your remarks seemed to come out of left field regarding this rendering. obviously new buildings aren't 'heritage' buildings. But I appreciate it when a builder incorporates aspects of heritage architecture in order to help improve our downtown instead of plopping down another piece of junk like the fed building on Bay Street.

It's still ugly. Nothing says streetwall like a pair of garage doors.

the city demands that all new downtown projects provide their own parking. lame, I know. At least there are two retail spaces on the sidewalk frontage.