The letter calls on the City and Province to continue implementing the BLAST transit network, to complete the process to select a bidder that will build and operate the system, and to prioritize approval of the operating agreement.

A coalition of leaders from Hamilton's anchor institutions has once again urged Council and the Province to move forward with Hamilton's light rail transit (LRT) project.

BLAST transit network with B-Line LRT as phase one

In an open letter published on October 31, the leaders call upon the City and Province to continue implementing the city-wide BLAST transit network, to complete the request for proposals (RFP) process to select a bidder that will build and operate the system, and to make approval of the operating agreement between Metrolinx and the City a top priority.

The leaders argue that LRT will "improve mobility and quality of life in our community, reduce traffic congestion on our roads and unlock new investment in Hamilton that will generate revenue for other important city-building projects." The letter continues, "The sooner construction of the B-line LRT begins, the sooner we will achieve these benefits for our citizens."

The letter notes that "voters have clearly expressed a desire to move forward with the B-Line LRT" with the decisive re-election of Mayor Fred Eisenberger.

The anchor institutions also sent a letter of support for LRT in March 2017 when the project was in political jeopardy after Council got cold feet about moving forward with an Environmental Project Report addendum. After an overwhelming demonstration of broad-based support from an unprecedented coalition of business, community, social, environmental, labour and civic organizations, Council ended up reaffirming their support and allowing the project to move forward.

But diehard LRT opponents insisted on making the recent municipal election yet another referendum on LRT, coalescing behind a well-funded anti-LRT candidate with a simple "Stop the Train" message. The anti-LRT candidate was soundly defeated, receiving only 38 percent of the vote and winning only two out of 15 wards.

Ontario Premier Doug Ford has promised repeatedly that he will honour the provincial LRT funding commitment if that's what Hamilton decides, and Hamilton voters have just given the project a decisive majority endorsement.

Following is the full text of the letter from Hamilton's Anchor Institutions.

Next Stop Operating Agreement: Full Speed Ahead on Hamilton LRT

We, the anchor institutions of Hamilton, wish to reiterate our position that a robust transit system is important for the health and prosperity of our city. Transit expansion projects, such as the B-Line LRT, will improve mobility and quality of life in our community, reduce traffic congestion on our roads and unlock new investment in Hamilton that will generate revenue for other important city-building projects. The sooner construction of the B-line LRT begins, the sooner we will achieve these benefits for our citizens.

In re-electing Mayor Eisenberger, voters have clearly expressed a desire to move forward with the B-Line LRT, for which $1B has been committed by the provincial government. With this clarity and with great optimism for the benefits of this project, we urge:

We gratefully acknowledge and value our provincial government's funding for the B-line LRT. We fully support the completion of this project and vow to collaborate with all levels of government to ensure that impacts are mitigated and the investment is optimized. 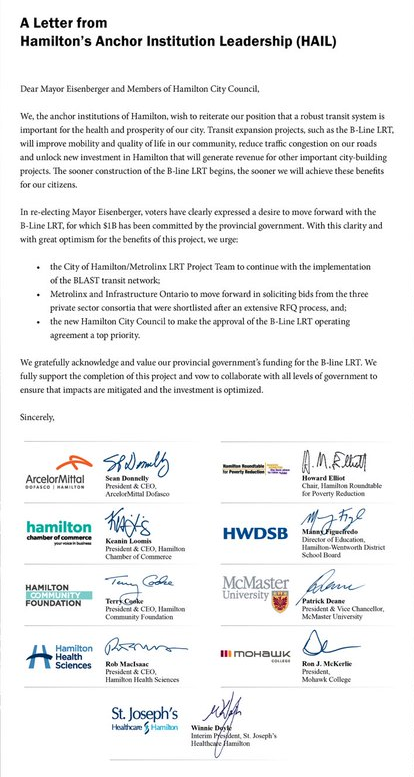 Just in case anyone thinks this debate is unique to Hamilton, check out how bad it could be if we had Koch brothers involved: https://www.nytimes.com/2018/06/19/clima...