A letter from a former No Hamilton LRT activist apologizes for stirring 'fear and doubt' and 'scheming' to 'disrupt' LRT project and also notes collaboration with Councillor Donna Skelly.

The correspondence attached to the agenda for the March 29, 2017 City Council meeting includes a rather extraordinary letter from Theodore Sares, the author of the @nohamiltonlrt Twitter account and a former anti-LRT campaigner. The letter can be found under section 5.15, item (m) in the agenda, and can be downloaded from here [PDF].

The subject line is: "an apology from a No Hamilton LRT campaigner (I'm sorry)".

The letter apologizes for "allowing myself to become part of something that has gotten ugly, and for the harsh and unfair things that have been said" about members of City Council during meetings and on social media. It expresses "regret" for Twitter posts that "made some people really upset".

The letter acknowledges that the No Hamilton LRT group has followed a strategy "to stir up as much fear and doubt about this project as possible, to always talk about 'cost' and taxes and damage to the downtown." It goes on, "There is a lot of 'scheming' to try and disrupt the project and create controversy."

Sares writes that he became concerned about his group's tactics once Donald Trump was elected United States President. "Our tactics were always along the 'Trump lines' and I never really thought they would be successful but now I see that you can spread fear and doubt and 'fake news' and it will work, but the consequences can be very ugly and people are divided."

He adds, "So I have to apologize, and say sorry for all of that."

The letter closes by arguing that the focus now should be on making plans "to help the businesses along King St. Instead of fighting and creating a mess like Trump in the USA we should figure out how to make this work for EVERYBODY."

The email is dated November 24, 2016, the same date that Sares also posted an apology on his @nohamiltonlrt Twitter account that repeated some of the letter's contents.

This dramatic admission is a welcome development from a former LRT opponent, and it comes as no surprise to observers of the No Hamilton LRT movement, which has been characterized by false and misleading claims, angry cynicism and civic self-loathing toward Hamilton.

Perhaps most dramatically, the letter alleges that Ward 7 Councillor Donna Skelly "works closely with the No Hamilton LRT people and especially [organization leader] Carol Lazich" on its activities, including an attempted "abolish the LRT subcommittee motion".

The letter also alleges that Skelly uses a private email address in her correspondence with Lazich and the No Hamilton LRT group, possibly in order to avoid being exposed in a Freedom of Information request. RTH has obtained an email from Lazich that was sent to this address. 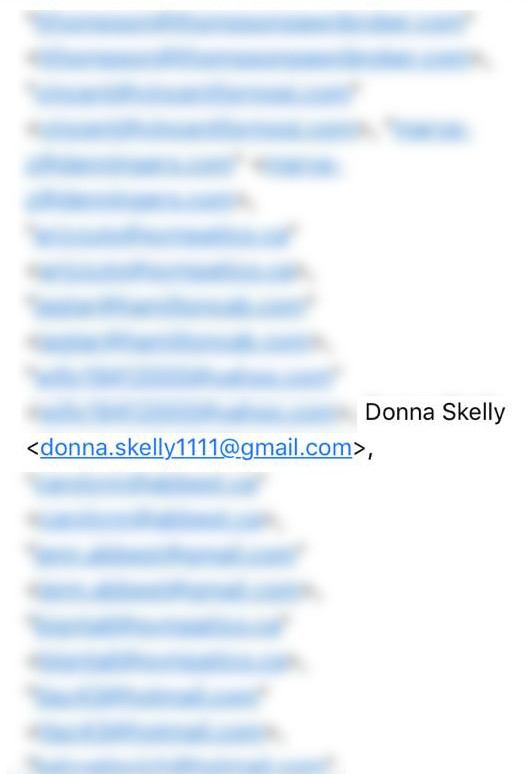 The admission of active collaboration between the No Hamilton LRT movement and Councillor Skelly is of particular concern. Despite promising in her by-election win to respect Council decisions already made, Skelly has been busy disrupting and undermining the City's LRT project.

If she has, in fact, been trying to avoid accountability for her actions by using a private email address, that is a serious breach of trust which must be investigated by the City's Integrity Commissioner.

Carol Lazich is a registered lobbyist with the City of Hamilton on behalf of an organization called "Hamilton Coalition on Sensible Transit".

I have been part of the No Hamilton LRT movement since around the time it started and I run our Twitter account and have also contacted you in the past to voice my opposition to the LRT project.

I still believe that there are MANY unanswered questions with regards to this project and that there are going to be impacts to businesses along King St that should be managed or helped, but at this time I wanted to write a short apology for allowing myself to become part of something that has gotten ugly, and for the harsh and unfair things that have been said about many of you on social media and at meetings and so on.

Our strategy has been to stir up as much fear and doubt about this project as possible, to always talk about "cost" and taxes and damage to the downtown. I posted some things on Twitter like this and some of it made people really upset, which I regret now.

There is a lot of "scheming" to try and disrupt the project and create controversy. Donna Skelly works closely with the No Hamilton LRT people and especially Carol Lazich to do stuff like that abolish the LRT subcommittee motion (by the way she uses a gmail account when she works with Carol (donna.skelly1111@gmail.com) instead of her city councillor email, maybe those are tracked???)

Anyway here is the point of my email. I have gone along with this stuff and also I admit encouraged it but when Trump was elected in the USA I fell silent. Our tactics were always along the "Trump lines" and I never really thought they would be successful but now I see that you can spread fear and doubt and "fake news" and it will work, but the consequences can be very ugly and people are divided.

So I have to apologize, and say sorry for all of that.

Where I disagree with many on the No Hamilton LRT side now is that I think the issue could be settled, it is just transit, maybe some good will come of it. A lot of the people in my building use the HSR.

What should happen now is that plans should be made to help the businesses on King St. Instead of fighting and creating a mess like Trump in the USA we should figure out how to make this work for EVERYBODY.

I have voiced this opinion to some of the No Hamilton LRT people and some of them have been very nasty about it, that has been a real turnoff for me. Especially one who made comments about my disability. The whole thing is upsetting and I think I am done with all of this.

Thank you for reading and have a nice day,

The idea that a sitting councillor is privately collaborating with an effort to undermine a project that would see a billion dollars invested in our city is utterly unconscionable. The lack of integrity here is shocking. Very clearly, this is the sort of "small group of ideologues who try to have a disproportionate influence on council's decisions" that Terry Whitehead was talking about, although not remotely the group of citizens he was aiming at. I hope this gets a thorough airing out in upcoming delegations to council. To the best of my knowledge, councillor Skelly's actions are illegal as well as immoral as well as a slap in the face to nearly a decade of effort to improve our city.

Very commendable of Theodore. I hope that others can learn from his example.

Would Skelly's actions be considered a conflict of interest that could potentially prevent her from voting on project matters?

"Would Skelly's actions be considered a conflict of interest that could potentially prevent her from voting on project matters?"

Likely not. The Municipal Conflict of Interest Act only requires recusal from a vote or debate in respect of matters in which a councillor has a "pecuniary interest" and a pecuniary interest is generally one of a financial nature.

However, if Clr. Skelly was paid to assist with the lobbying effort or accepted anything of value in return for her assistance with this alleged planning and coordination, a conflict may exist. I expect this would not be the case although it remains, I suppose, possible. I would expect that the Councillor engaged with this rather farcical group for purely political gain, rather than for a financial one.

Thanks, that was a very informative answer.

Heads up, I just noticed:

The Theodore Sares letter is on the official City of Hamilton public record now.

It is one of the letters for acceptance in the March 29th council agenda (separate from the very important-to-attend March 28th GIC approval of ESR):

Drilling down, this is the PDF file of the long Theodore Sares letter, Section 5.15 item (m)