The City is considering sacrificing bike lanes to maintain automobile traffic flow, undermining the goal of leveraging LRT to transform how Hamiltonians live and get around.

The plan to build a light rail transit (LRT) line across Hamilton from McMaster University to Queenston Traffic Circle is creating a potential conflict with the city's already-fragmentary network of bicycle infrastructure. 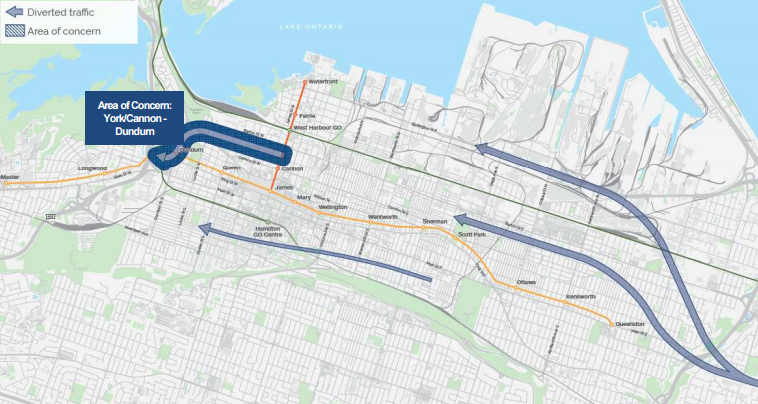 Last year, traffic modelling conducted for the City of Hamilton and Metrolinx had already identified an "area of concern" for westbound vehicle traffic between Queen street and Highway 403.

Specifically, there are few options for westbound automobiles to connect with the highway - particularly traffic heading westbound on the 403, since there is only an eastbound on-ramp at York Boulevard.

A new round of public information centres held this month acklowledges that the City and Metrolinx might decide to remove the bike lanes on Dundurn Street North between King and York, and the bike lanes on York Boulevard between Dundurn and Queen, in order to accommodate that westbound automobile traffic.

In addition, the planned addition of bike lanes on Main Street West from Cootes to Macklin has been scrapped in order to leave an extra driving lane for automobile trips coming from Dundas. 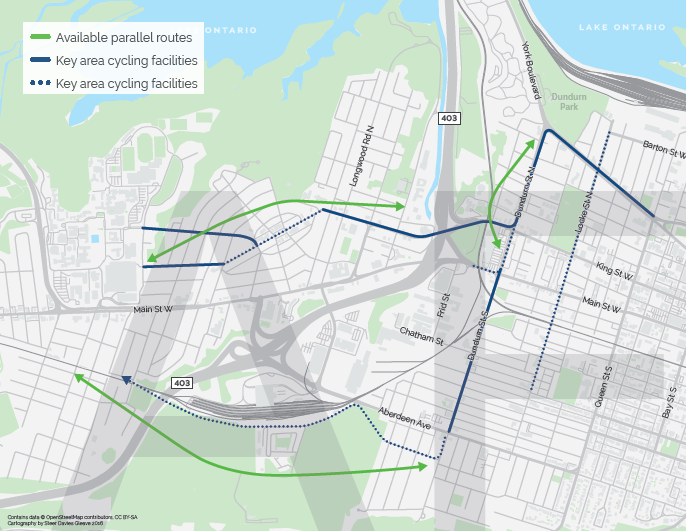 This is extremely frustrating. A huge part of the point of investing in LRT is to transform the design of the transportation system to prioritize walking, cycling and transit over driving.

Eliminating bike lanes so that the street can accommodate more automobile traffic undermines the success of the LRT system in two ways: it weakens the comparative advantage of LRT over driving, and it weakens the connectivity between the LRT stations and active transportation.

Making Main Street two-way would address at least some of the westbound traffic challenges, even if it is not feasible to add a new highway on-ramp, and the existing off-ramps are not a major barrier to conversion.

In addition, a two-way Main Street will provide a number of other benefits, including:

The real net advantages of urban two-way streets over one-way thoroughfares have been demonstrated and proven consistently and repeatedly on streets and cities all over the world, including a number of highly successful two-way conversions right here in Hamilton.

The fact that this is not even being considered - out of sensitivity to politicians who are so adamantly opposed to a two-way Main Street that they refuse even to find out whether it would be feasible - means we are literally denying ourselves the opportunity to study whether it makes sense.

That is just fundamentally bad leadership and it will result in a project that does not achieve its full potential.

There is one encouraging note here: Metrolinx and the City have at least stated that they are committed to maintaining or replacing the existing cycling infrastructure around the LRT line.

According to the formal documentation that came with the current round of information centres: "Metrolinx and the City of Hamilton are committed to replacing bike lanes impacted by the LRT project during construction and developing longer term solutions in close consultation with affected neighbourhoods and the cycling community."

In subsequent articles, we will consider some opportunities to replace and even improve the cycling infrastructure in the Strathcona and West Hamilton neighbourhoods.

I don't see how they couldn't still squeeze a bike lane in on any of those streets. Even with three lanes of car traffic Dundurn could still fit one.

Also, a lane is a lane and they are not exclusively for cars so until a dedicated bike lane is figured out I hope the braver cyclists continue to use those roads.

First off, I want to thank Ryan for getting around to addressing this issue. I was critical of Ryan for not bringing this issue to the forefront earlier. I feel like your voice is wasted adding to the anti-Trump rhetoric that is literally being covered by every media news outlet in the world. We have our own problems in Hamilton.

Having said that, I'm not happy with these plans. I'm personally against the LRT due to its cost. But, I absolutely see the need for reduced car traffic in this city. I'm not convinced people will abandon their cars for the LRT; in fact, I'll wager that it will have no effect. However, I *am* convinced that the train will slow traffic down in terms of congestion and taking up lanes from car traffic. So in that regard and that regard only I'm pro-LRT. I don't drive. I'm a cyclist and a pedestrian and I see that the two major highways that are running through Hamilton (King and Main) need to be broken up.

But taking out bike lanes to accommodate cars is a major step backward. I can't support these plans. You're pushing the weakest and most vulnerable off the streets. I read your proposals but I still don't understand how I get over the 403 on a bicycle. This is absolutely frustrating. I'm more convinced then ever that the LRT belongs on Main; not King. Better yet, scrap it, save the Ontario taxpayer a billion and get on board with electric buses which are the future due to their flexibility. Paris and Vegas have autonomous electric buses online today. What will be available by the time the LRT opens for business in 2024? It's ridiculous. Open bus lanes back up. We can do this immediately. If you're ready to rip up the streets to install tracks then what's preventing us from putting the lanes back? The more I think about this issue the more convoluted, complicated, expensive, and unrealistic it is. It's so simple. You build from the bicycle up. Put in bike lanes. Then bus lanes. Cars get what's left over. The LRT is pushing out bikes and letting the cars through. It's absolutely counter intuitive. I've contacted my councillor, Johnson, Horvath, and the Hamilton Cycling Committee and will continue to do so until there's a real answer to the question: "How do I ride my bike from Strathcona to Mac on pavement without detours when the LRT opens." It seems you've glossed over this point Ryan; the Spec has reported the King Street lane will also be eliminated at the overpass leaving one lane for cars: http://www.thespec.com/opinion-story/7067472-dreschel-lrt-creates-west-end-traffic-concerns/ This would effectively prevent cyclists from getting over the 403 and will cut Hamilton in two.

I urge all cyclists and pedestrians to oppose the current plan. I understand that some supporters will treat this like the Liberals treated C51 "We know it's bad but we promise to fix it later" but this is a vehicle locked onto a track; there will be no fixes after it's built. Do not accept the reduction of cycling lanes along King St.

I have always said don't run the thing down King after wellington. Run it over the TH&B tracks out to the bike path behind Mac to Dundas. Cost less and the savings would allow a longer ride. Problem solved.