Having the highway exits meet Main at intersections rather than on-ramps would allow two-way traffic on Main and also de-velocitize drivers coming off the highway.

One of the arguments we often hear against the two-way conversion of Main Street is that it would be too expensive and/or difficult to change the interchange with Highway 403. I don't want to guess at what the cost of such a change would be, but the difficulty and complexity seems to me to be quite minimal. 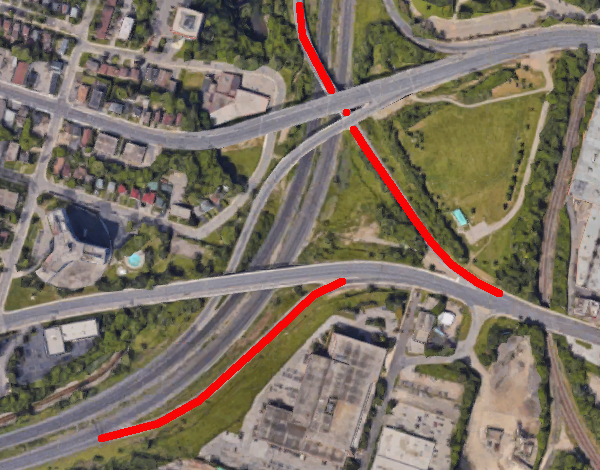 As you can see, both ramps intersect Main Street at an angle, allowing highway drivers to merge right into the eastbound-only traffic on Main.

Both of these ramps run on the ground and at grade with Main Street before they actually reach the street. We can bend them to meet Main at a right angle without having to do any changes to a bridge or overpass. In the following map, I have highlighted the routes that these exit ramps can take to meet Main Street at right angles. 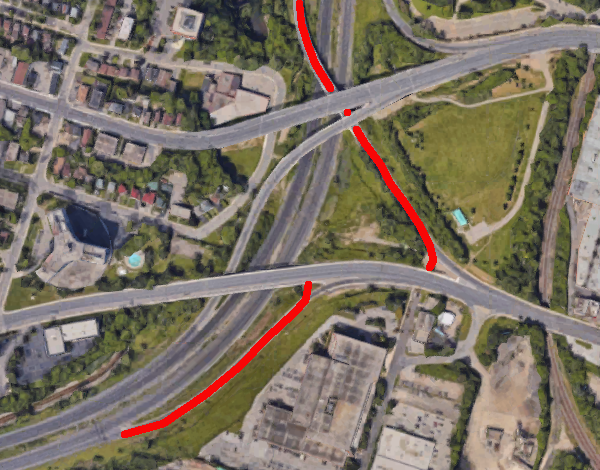 The two intersections would be around 150 metres apart, which is just far enough to put traffic signals at each intersection.

Having the highway exits meet Main at intersections rather than on-ramps accomplishes two things. First, obviously, it allows traffic to flow in both directions on Main Street. Second, it serves to de-velocitize drivers coming off the highway so that their internal sense of speed is reset for driving on city streets.

To double-check my analysis, I physically scouted the area where the highway exits meet Main Street and took some photos to demonstrate how plausible this is.

Here is the ramp from the westbound highway: you can see it bending to the left to merge with the eastbound traffic on Main. 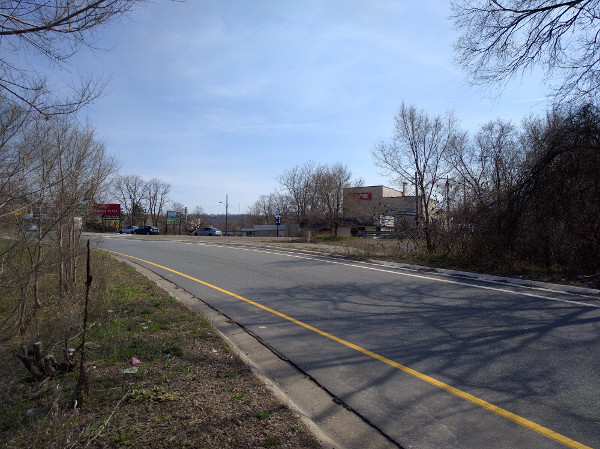 Here's a view of the ramp looking east from Main Street: 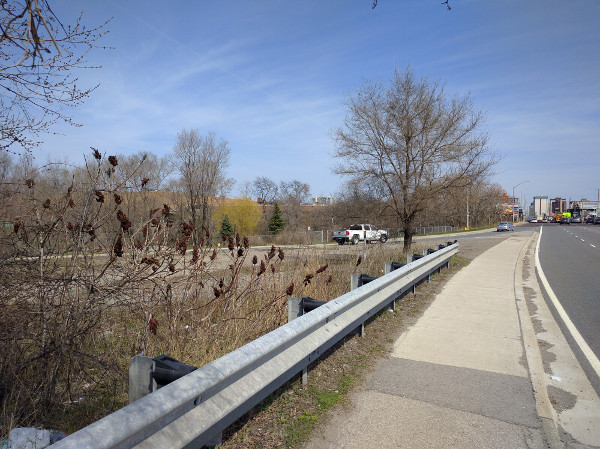 The good news is that the spot where the exit ramp would have to bend to meet Main Street at a more perpendicular angle is already bare gravel. 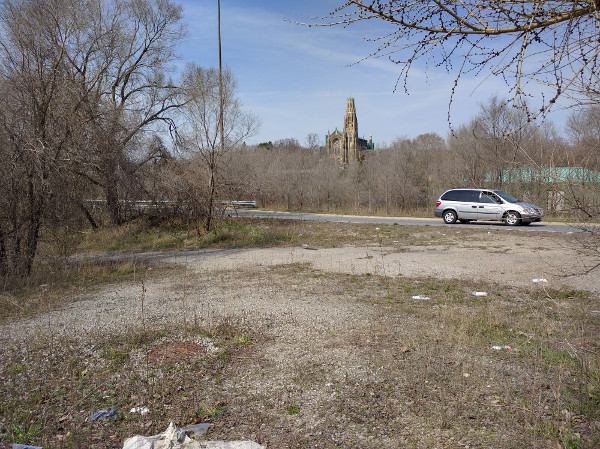 The situation is similar when you look across the street to the exit ramp from the eastbound highway lanes. 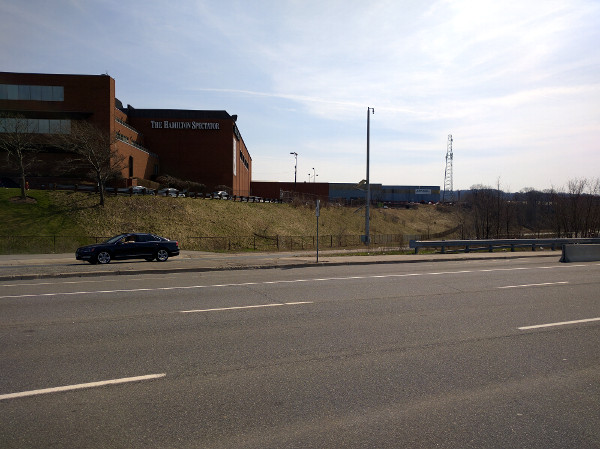 Highway 403 eastbound exit to Main Street, view from across Main

The ramp comes off the highway and ramps gradually upward to meet Main Street at grade. 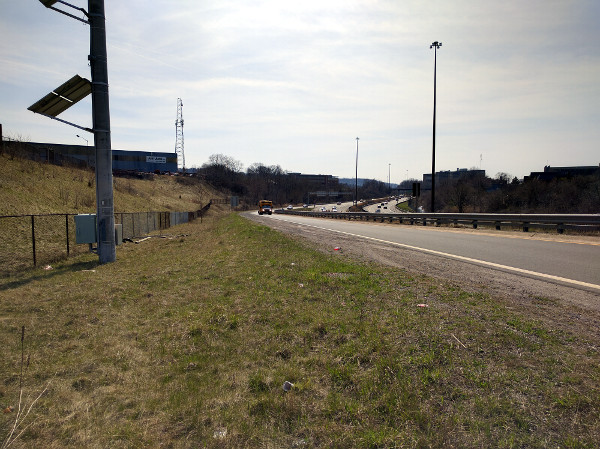 Likewise, this exit ramp has no bridge or overpass to deal with, so it's a matter of bending the end of the ramp where it meets Main Street. 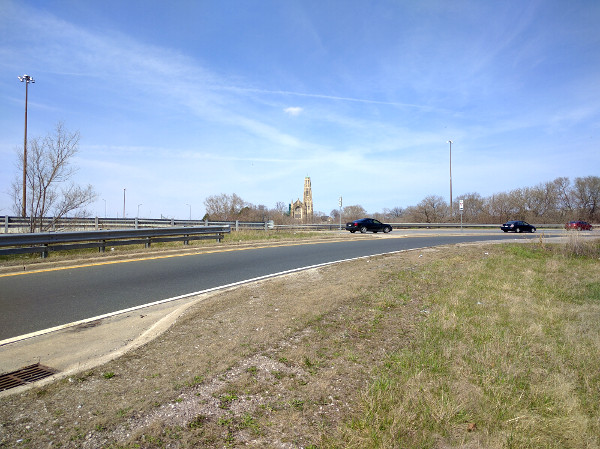 In fact, it is not actually necessary to re-orient both exits to enable two-way traffic. The exit from the eastbound highway could be left as it is, with the restriction that vehicles exiting this way can only turn east onto Main. That is already the case today, so it would not further restrict turning movements for people driving cars.

Of course, the exit from the westbound highway definitely needs to change, because the current ramp intersection would have traffic merging the wrong way into the westbound lanes of Main Street.

Maybe then the access to Frid Street could not be psychotic, too. Every time I drive my kids to Soccer World or Gravity gym, Frid/Main is white-knuckles.

I'd like to see Cannon go two way first or at the very least a single lane one way. From John all the way to Sherman it is almost entirely residential and yet it is a two lane one way street that encourages fast driving. I routinely see cars jockeying for position on that street driving way too fast. I've also noticed Cannon improving slowly but surely. It could be a really nice street as it already has some beautiful but badly neglected old houses along it. If we could make it feel like a safe street the change might come even faster.

I think with the coming LRT there won't be much argument about making Main two way. With the IV cut off to traffic it will HAVE to be two way.

Apparently "some" of the questions might be answered tomorrow. The city website is going to have something for us to chew on.

I thought the plan was to be revealed May 2?

So you can get off. with ll due respect that is a no brainer. How do you get on?

How do you get on?

Same way you get on via Main Street now: you don't :) You go South to Aberdeen or North to King.

Let me be more explicit than my question below.

Today I drive down one way king to get on the 403 either east or west bound. Pretty simple. That is currently usually three plus lanes of traffic. When the LRT is there I will be in one lane going West on King. If the king ramp is still open I can go East but not west because I cant get across the LRT. Does that mean I have to travel down Dundrun to Aberdeen or Lonngwood to go west? Or will a new span across the 403 let me turn left of King going west on the 403?

Main Street Traffic is going West as well. They will have to go down Dundurn to Aberdeen or proceed all the way to Longwood. Isn't that going to create significant traffic on Dundurn and Longwood?

And what about the traffic going north on Dundurn from Main. If the King ramps are open your are saying that people can go up Dundurn from Main to King and onto the 403. Wont that significantly increase the traffic on Dundurn particluarly as you will now have to stop to trun left at King and merge with the king traffic and somehow get around the LRT?

I don't think anyone has really any idea of the magnitude of this change. Wait until no-one can get down King behind the Go Buses stopping for their stops at rush hour. King will essentially be off limits. Main will be a parking lot in the morning and in the evening and no-one will want to be anywhere near the intersections of Dundurn and King or Main. People living on Aberdeen are going to go nuts. Getting on and off the 403 is the least of our worries.

Any bets if any business is going to want to move into Stelco Tower?

We don't have a hardware store in the dowtown core now. I am sure some traffic dependent business will be more than happy to move in.

Good luck on all of this.

Right. Hamilton is soooo different and soooo unique that it HAS to be the only city with traffic exiting 400 Series Highways into live traffic.

The only thing that makes us unique is the attitude of the spoiled entitled drivers that think it is their Constitutional Right to blast through this town unimpeded at all hours of the day.

Oh, and free parking too please. Life in the bubble of Hamilton!

Yeah all those spoiled entitled 90% of the population.

You forgot to double down and insist that the one ways be rolled out up on the Mountain too.

Nice try, most people aren't waving their arms around predicting disaster like you are.

Where are the Go buses going to go?

As if you care one whit where the GO busses will go.

But you're the answer guy. Where will it go, oh wise one?

Aren't they thinking about closing the king Exit?

I understand when you measure the volume over the course of the day, this may seem like a logical step. However, has anyone driven along the 403 both EB and WB during peak rush hour. The back up for both exits are already at a standstill.

Q. what is the logic of adding lights in an already "commercial" area? I agree with others, that all you will be doing is pushing that traffic to more residential exits like Aberdeen.

The exits highlighted act as a "gateway" and therefore the area developed around this area is non-residential...I don't see the point of adding lights and 2-way conversion.

So we've already ruined the area by making it a traffic sewer, so let's just leave it that way?

How about the whole paradigm needs shifted. Every sprawl home built on the southern edge of Hamilton adds AT LEAST one more car to that rush hour congestion you reference. That's part of the cost of the sprawl - congestion - time.

Let's start by stopping to add to the problem.

Where are you referring to when you say "southern edge"? Mountain? Ancaster? South of Main?

If referring to Ancaster area, my sample may be small, but the majority of the people I know in that area work in GTA and therefore do not access the said ramps. I am referring to those who live in the urban areas of lower Hamilton who travel to GTA for various reasons. From that sample, people have complained about the backlog at the Main St exits when trying to get home versus those who continue up the 403 to the LINC and beyond.

Overall, I agree with the need for a paradigm shift...we need density and we need smart planning. I just don't feel adding lights to an off-ramp will start the paradigm shift. My 2cents.

A large number of those vehicles are using Main St. to get to the mountain accesses. You can make better "time" getting off the highway.

How many other cities have designed their streets to encourage people to get off the highway and cut through the city?

A large number of those vehicles are using Main St. to get to the mountain accesses.

How many other cities have designed their streets to encourage people to get off the highway and cut through the city?

Guess you've never been to Mississauga or any other bedroom community in the GTA. Milton also comes to mind.

You could go one step further, and move the intracity bus terminal to the site of Cathedral Park 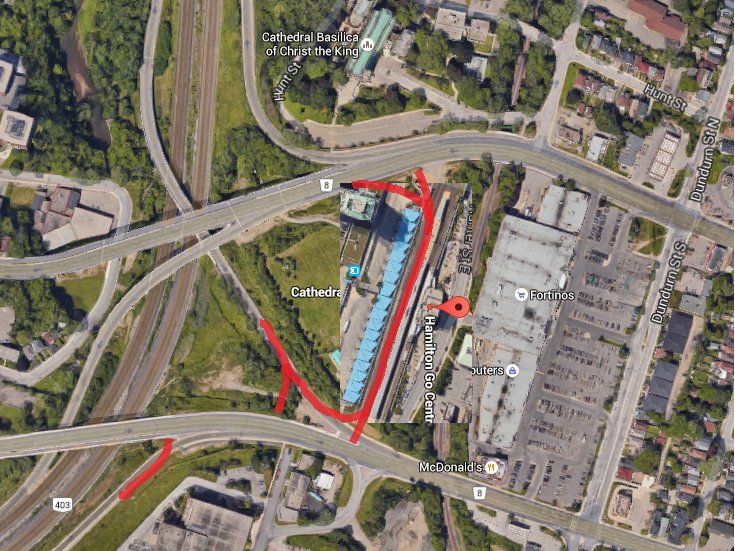 This would achieve several positive things:

This seems to make a lot of sense as an integration into a TOD redevelopment of Dundurn Mall.

It is probably way too early, but Dundurn Mall will eventually become old and need a big renovation in 20 years (that's within 10 years after LRT opens), so this could be a good opportunity to integrate a bus terminal in this style.

In 20 years from now, Dundurn Mall developers would probably salivitate on the idea of expanding if the LRT is popular -- possible/partial underground parking, 2-storey terraced retail, more walking/patio friendly areas, more retail that is also pedestrian-friendly. Existing McD can stay as it is new enough to last. Strip (except maybe a Fortino refacading) would be a teardown-reno of some kind.

Perhaps they are already brainstorming?