The installation of new parking-protected bike lanes on Herkimer and Charlton between Dundurn and James is in progress after starting on Sunday night. 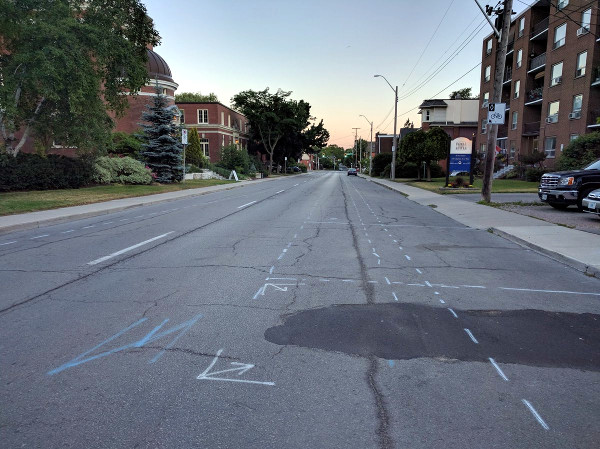 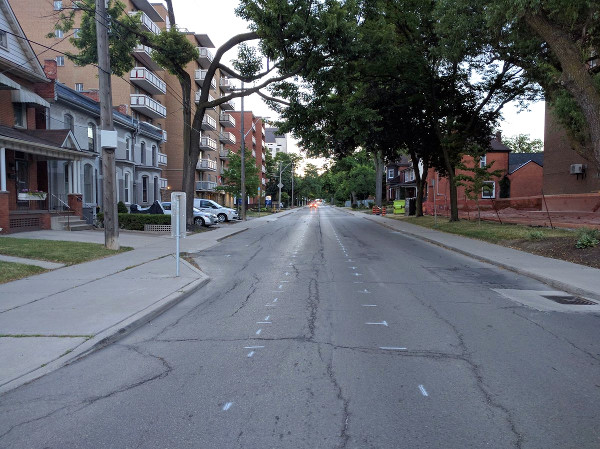 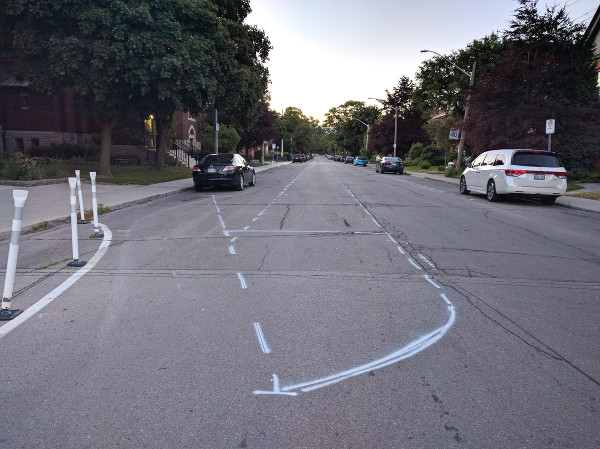 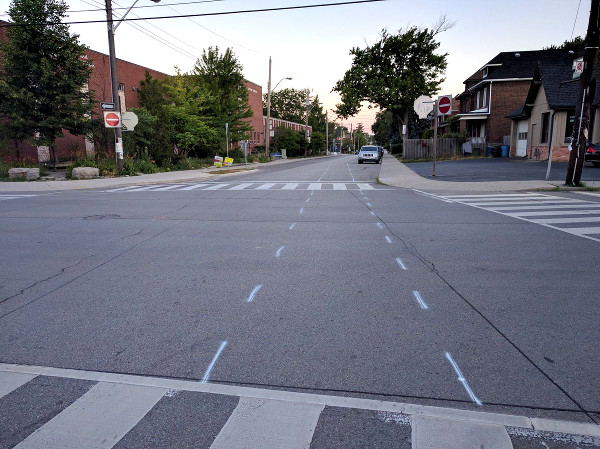 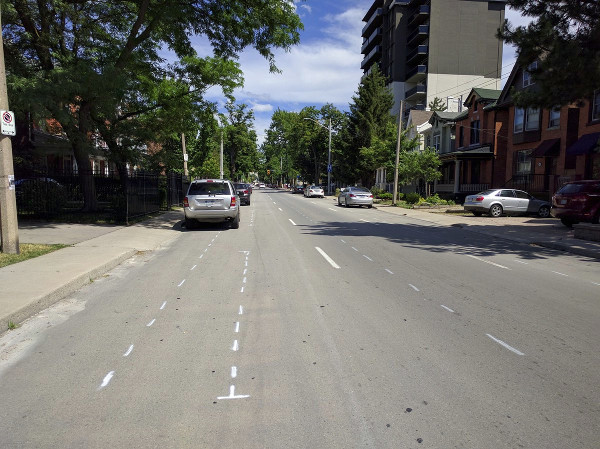 Yet more pavement markings on Herkimer

As of yesterday, City workers had also begun marking up the locations of new ladder- or zebra-style crosswalks - 18 of them, according to Ward 2 Councillor Jason Farr. 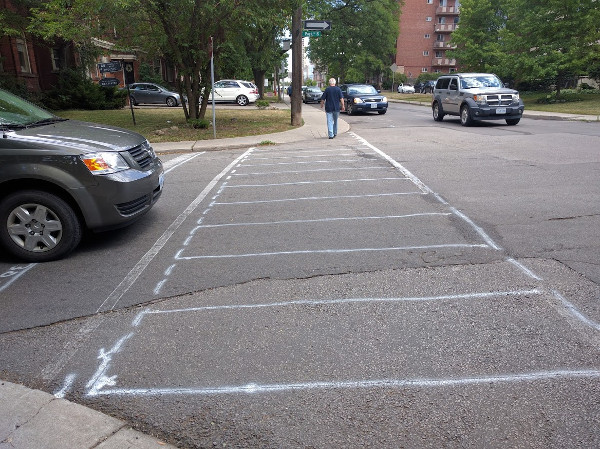 Pavement markings for planned ladder crosswalk on Park at Charlton 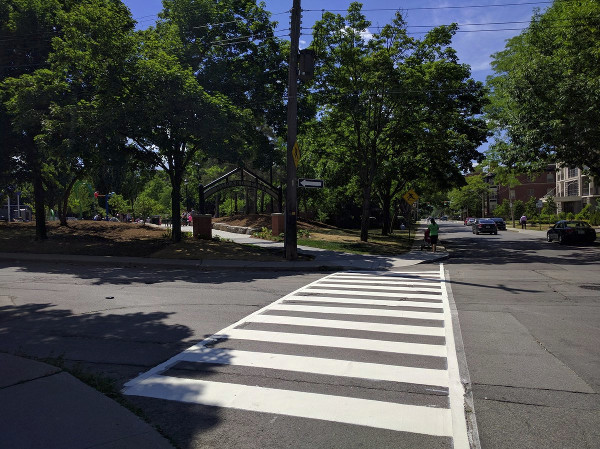 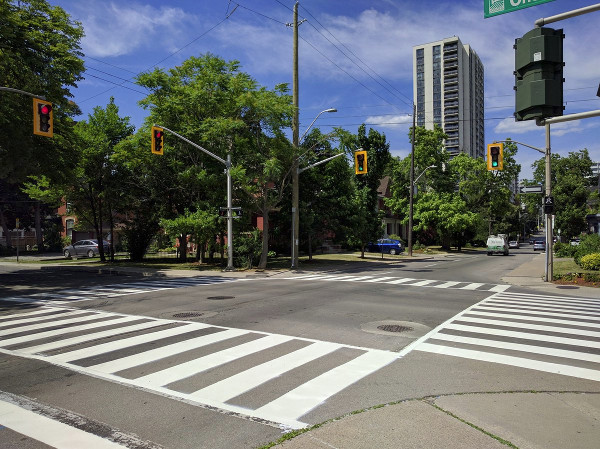 It is exciting to see such an expansive, integrated safe streets initiative finally come to pass after years of delays and revisions. In this case, it looks like taking the time to get it right was definitely worth the wait.

It's all looking quite good.

Do we know when these lanes will be ready for use? I'm excited to try them out although I'm waiting to see some north-south bike lanes to connect some of these great new east-west lanes.

So I guess the next question is where should we be looking for the next improvement (after Bay of course)? A north-south route further east like Victoria or Wentworth Perhaps? A proper east-west route in the south half of the lower city to mirror Charlton/Herkimer (sortof like Hunter, but useful and complete)?

Wentworth would be so logical with connections to Cannon, the rail trail, Stinson and Wentworth Stairs. It's so lightly traveled it could have 1 lane each way with bike lanes both ways, but unfortunately the city is planning another their TWINO conversion to two way. 2 lanes SB and 1 lane NB even though the entire street only carries less than 1 lane's worth of traffic each day....so let's give it 3. Yay for empty, high-speed lanes on quiet residential streets.....

I stand corrected. According to numbers Ryan posted last year, Wentworth never carries HALF a traffic-lane's worth of cars on a given day. 10,000 cars per day is normal for a city traffic lane. Wentworth sees it's highest volume at King William: 4,000 per day.

So a street carrying half a lane of traffic is getting 3 lanes....and no bike lanes. Hamilton planning at it's finest. https://raisethehammer.org/comment/11561...

Some actual lines are in on the first stretch of Charlton. Looks pretty interesting in that there is a double orange line about 3 feet out from the left curb and the bike lane on the right.

I'll never forget my one ride of terror on Charlton (never been back since). When this lane is in I'm climbing right back on that horse!

The double orange lines 3 feet from the left curb are for the 1 block eastbound contraflow lane that connect Herkimer to Charlton via Macnab while avoiding the complicated intersection of Herkimer and James. A great addition to keep eastbound riders safe, connecting to the rail trail and other destinations.

I just watched a line of three cars drive on Charlton from Locke to Dundurn, each with at least 2 wheels in the very bright freshly painted bicycle lane buffer the entire distance. I hope we get through the initial 'educational' period safely.

What we really need are knockdown sticks that can be removed in the winter. People will want to speed down that stretch of Charlton ( as well as on the parallel stretch of Herkimer ) as that is what they are used to doing. The closer they have to drive to the parked cars the slower they will go so naturally they will just straddle the bike lanes. This habit needs to be nipped in the bud.

Come to think of it I wonder if rumble strips would be a good idea between the bike lane and road?

Also think a few painted 'PARKING' signs in the new parking spots that was once the right lanes on Charlton might be a good idea. I was on Charlton twice today and both times saw people driving over them as if they were car lanes.

And the new lines over the old lines at Queen is just a jumbled confusing mess. Really hope they plan on blacking out the old ones.

as we speak, cars are all parked against the curb in the bike lane. Def need something painted on the ground, or the city should park a car there permanently for a few days to show how it works.

I used the new lanes - mostly complete on Charlton; about half complete on Herkimer - to get between McMaster and St. Joe's this morning. Verdict: nice!

Seasoned lane-sharer or lane-taker that I am, it surprises me to find out how relaxing a good bike lane can be(1): I can just ride without checking by mirror repeatedly for approaching traffic and worrying about getting into the door zone.

Two grumbles: a car double-parked in the bike lane on Herkimer and a car coming within a foot of hitting me when it turned right across the bike lane. I expect that the former will happen for a while and then stop - just as was the case with people parking in the bike lane in front of the beer store when the lanes first went it.

1: Door-zone bike lanes like those on Dundurn South are not at all relaxing as I have to be riding the edge of the lane and worrying about a wild door suddenly appearing.

In the "Nice to Have" department (perhaps next cycle of painting?)

Why do we need sidewalks on each side of the street?

Anyone driving down Herkimer at rush hour lately. Is there some temporary problem that has turned it into a nightmare?

Found the answer. Queen Street Hill is closed for repairs.