Another 67 businesses and organizations have formally stated their support for Hamilton's LRT plan.

Logo-motion continues. Here are 67 more businesses and community groups that support Hamilton's Light Rail Transit (LRT) plan. There were too many to fit on the first poster, which got up to 168 groups.

Please keep sending them to me. 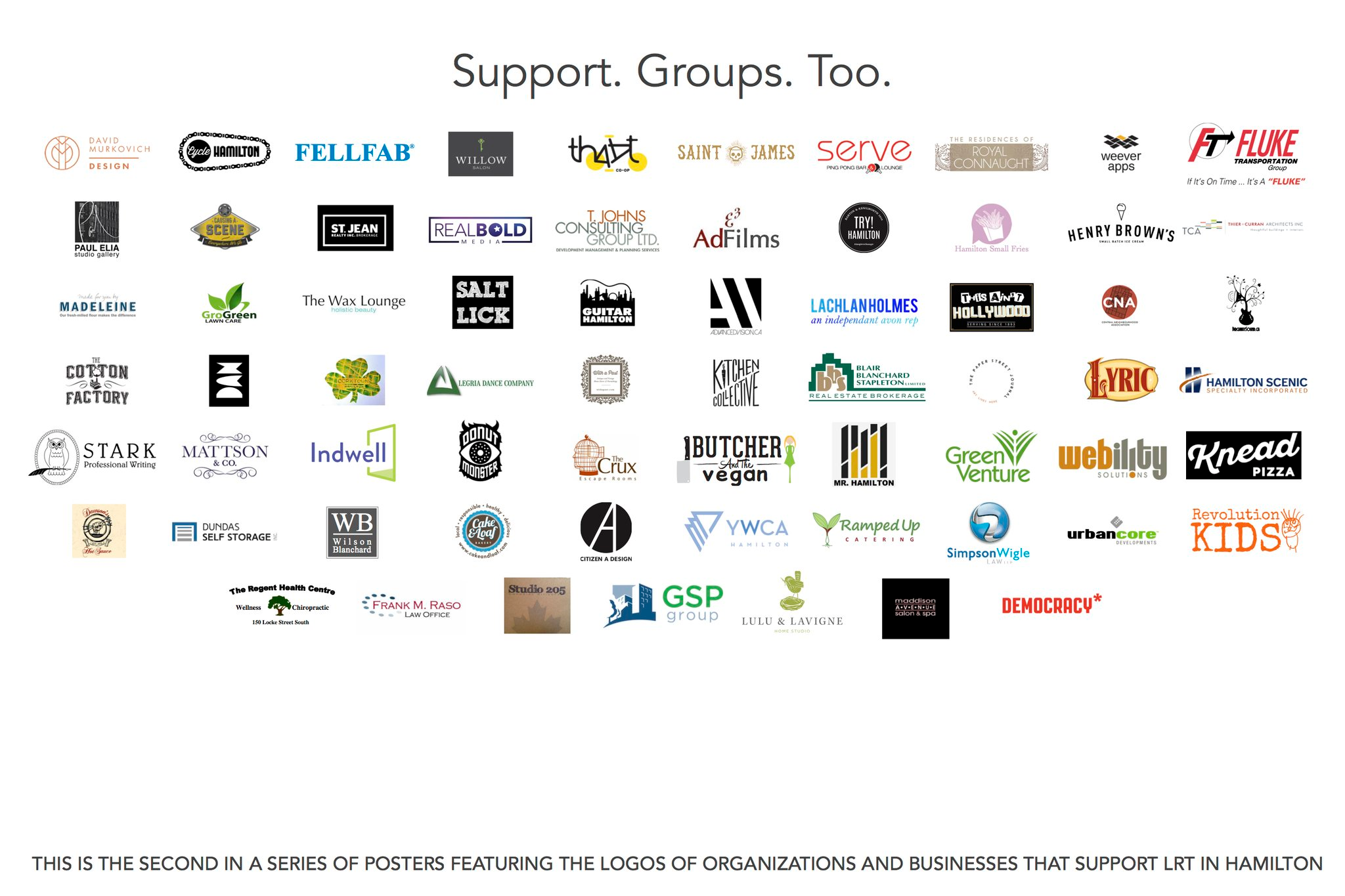 Here is a list of groups that formally support Hamilton's LRT plan:

Update: Here is a map of the businesses and organizations that have pledged their support for Hamilton's LRT plan:

Thank you for putting this together. The level of support is both impressive and unsurprising. There are many, many people who care for the health, prosperity and future of Hamilton.

I'm probably not the only one thinking this, but let's go out of our way to support these businesses who are speaking up for our future. Too often we only hear from the NIMBY's in Hamilton. Let's reward those who share a city-wide vision to move forward and embrace the future.

Showing my support by eating more donuts is a sacrifice I am willing to make. YOU'RE WELCOME HAMILTON!

So, the total number of Hamilton businesses and community groups officially supporting LRT is up to 168+67=235?

That's great news! Kudos to all these Hamiltonians who are willing to stand up publicly for a $1 billion investment in Hamilton's future.

Still waiting to see a group that's against LRT.

A couple of councillors are against it - does that count as a group?

A free market economy? Remind me again of the name of the company that is building the LRT?

I totally understand the support LRT has from various groups who are focused on the positive attributes. I also know these are intelligent people & don't understand why they don't want to hear the answers to some very important questions that have been raised before they give total support?

Maybe because they've looked at it and weighed the pros against the cons, and see it more as this: if the city lobbies the province to provide funding for LRT, the province provides the capital to build what you've lobbied for, then you say that you aren't actually sure you want what you lobbied for, the optics are pretty bad on that. Not to mention, you won't be getting any assistance for any other asks for a generation.

"i get by with a little help from my friends"

or....because the approval by the province for hamiltons request for 100% funding for lrt was the end of a complicated process that was ongoing for over a decade. yes, there are a few important details left and thousands of little details left. but the "meat and potatos" work, routes and tecnologoy and so forth HAS been completed and approved by the city and the provnce as the best scenario. so we dont want to revisit lrt vs brt vs flying cars or main/king corridor vs perimeter ring/spoke service. those important details HAVE been decided, again, after a decade plus of planning and study.

How much is a full-age ad in the Spectator? This is a clear winner for such a thing as the vote gets closer, map included.

Or a massive flag to hang at City Hall that is visible from Council Chambers ?

You need to send some big and tall people to Gilbert's for a discussion real soon. ;-)

Actually, I said back in the original post, any group other than those Councilors and same 3 businesses that keep getting mentioned. Surely by now after a decade or so? Some other group has formed an organized resistance against this LRT plan. I have worked too long in this industry to believe that there are so few organized groups against the LRT plan. Yet, nothing but a few individuals on this website, a few isolated businesses and a group of Provincial and Federal Conservative Party wanabe's maskquerading as city councilors who frankly, after speaking with them in a professional capacity at City Hall some time ago, come across as really not that bright or at all knowledgeable on city planning issues. I refuse to believe that people in Hamilton, even those I disagree with, are this poorly organized.

Maybe this this site is the wrong vehicle to get this information but wow! All I originally wanted to know was how well thought out the opposition position's and arguments against this LRT project truly are. I don't want to hear from cranks and people who really know nothing at all about transit issues. Frankly to all those who are against this LRT project, the people you have chosen locally to represent your point of view and do most of the public speaking about it, have at best, no or very little knowledge about rapid transit are pathetic at explaining their positions! The positions of those Councilors who seem to be the biggest and only hope at stopping this project have come up with little more than run of the mill anti LRT points that, generally do a poor job of hiding their true anti all transit feelings!

The only "group" are 41 people who have liked facebook NOHAMILTONLRT. Not much to see there though.

That, by the way, is a public group so anyone can see who the members are. Of those now 50 members, 6 are multiple people in the same family as the admin, and no businesses at all belong to the group.

hmm I guess property owners and landlords don't count. Surprisingly many do not need logos to say no to LRT. I would like to see more comments from businesses that will be aversely affected rather than companies that lose nothing because they are not on King Street. Butcher and Vegan really, you may be a patron to many of these businesses but it does not paint a picture of those who really support an LRT. I am appalled at the outrageous bullying tactics on social media and the personal attacks on businesses and individuals expressing their opinions. We can all agree to disagree but cant we be a little more civil ?