Hamilton is Not a Bedroom Community

Nearly 70 percent of Hamiltonians work in Hamilton, and another 38,000 people commute into the city.

The marbling of contempt and self-loathing that runs through civic discourse in Hamilton has many veins, and one of them is the perception that Hamilton is just a bedroom community that should not aspire to being more than a place for Toronto workers priced out of the big smoke to hang their hats at night.

That perception favours certain policy strategies over others - for example, prioritizing highways and regional express rail over local transit and integrated rapid transit.

The problem is that the perception is quite wrong. Hamilton is not just a distant suburb of Toronto - in fact, only a tiny proportion of Hamilton workers commute that far. According to an analysis [PDF] by research and planning consultancy Civicplan, nearly 70 percent of the city's 201,000 commuters work in Hamilton itself. 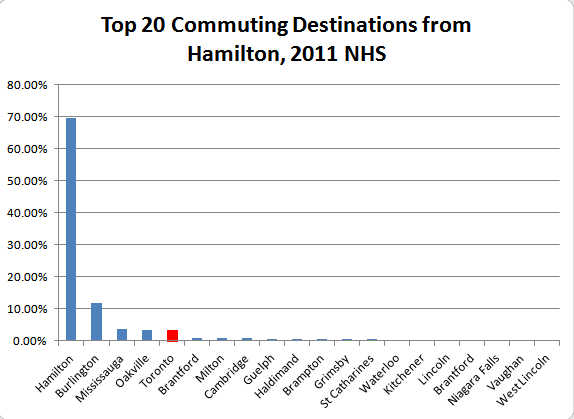 Toronto is in distant fifth place as a destination for Hamilton workers.

If you exclude Hamilton workers who commute to jobs in Hamilton, the distribution of outbound commuters becomes even more clear: 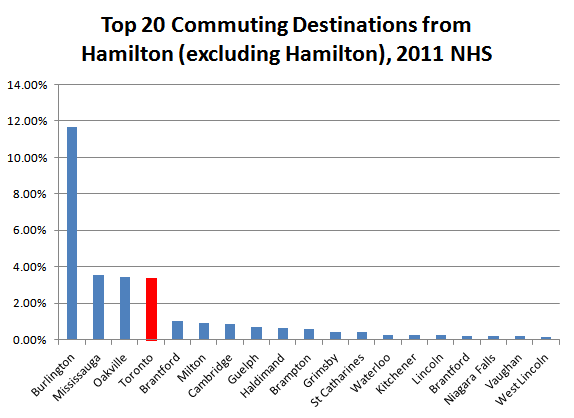 The percentage of commuters who travel to Mississauga and Toronto has increased a bit since the 2006 census, but otherwise the distribution of commuting destinations has remained quite stable over the past three census periods.

When we compare Hamilton's rate of intra-commuting - the rate of Hamilton workers commuting to jobs inside Hamilton - again we see Hamilton compares favourably to other cities that have been described as "bedroom communities". 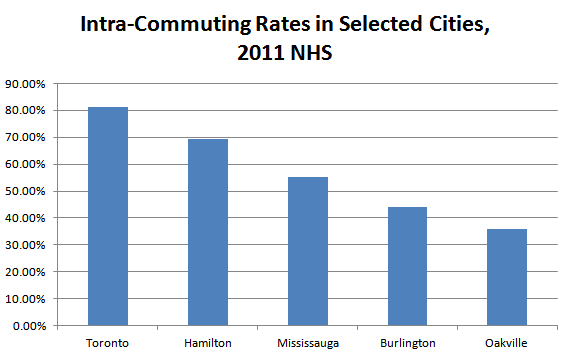 Toronto has the highest rate of intra-commuting, with 81.13 percent of Toronto commuters travelling to jobs in Toronto, but Hamilton fares well with an intra-commuting rate of 69.43 percent, compared to 55.11 percent in Mississauga, 44.06 percent in Burlington and 35.82 percent in Oakville.

Hamilton is a smaller city than Toronto, but it is a city and the centre of its own metropolitan area, as well as a part of the Greater Toronto and Hamilton Area.

It is time we embrace the fact that Hamilton is a city, a destination for commuters, and an urban economic engine with the potential to be a significant job creator for both Hamiltonians and inbound commuters.

Toward this end, we should note that the downtown core is the city's single biggest employment centre, with 25,000 jobs and growing steadily. Instead of betting the farm (literally) on residential building and some low-value employment in logistics and warehousing, Hamilton needs to focus on leveraging our essential urban economies to generate economic growth and development in a way that actually increases the city's long-term financial sustainability.

I do agree that Hamilton is far, far from being a bedroom community of Toronto. It has too many independent TV and Radio stations as well as new media sites (like this website)that concentrate their attention on Hamilton and the area directly around it and purposely ignoring Toronto most of the time. That being said, with the province and finally the feds pouring money into rapid transit of various types increasing the capacity and frequency of the transit links between the two cities expect the proportion of Toronto bound bedroom commuters to increase dramatically.

I think the real problem was the loss of the industrial base that made Hamilton very unique. Those heavy industries like steel making, like it or not, helped to differentiate Hamilton from the cities around it like Oakville or Toronto. There are those I think those who still believe that without those heavy industries there is very little left but to be a bedroom community of Toronto. Its these people whom lack a new vision are the ones that Hamilton really doesn't need. The LRT debate shows my point. Buses are fine for some people and they will always be part of the transit mix. Having LRT will not only provide rapid transit with a hell of a lot of latent passenger carrying capacity (something BRT people forget about a lot in their quest for something cheaper)but will provide a focus around which many other Hamilton centric real estate developments and new cultural institutions will form. Many of the other transportation projects in the Hamilton area are based on commuting outside the city. Its about time that the people and politicians who want these improved highway links and even, the vast improvements to GO Transit's Rail system must understand that they are focusing on people leaving the city and not staying. Don't get me wrong these links are very important but, I'm always astounded in Hamilton that so many, so quickly choose those projects over transportation and transit projects that focus on keeping workers and jobs in Hamilton.

As a kid growing up in Toronto sometimes my older sister and I would listen to the radio on Sunday mornings while playing cards (fish, crazy 8's, blackjack and occasionally, poker). Sometimes that radio station would be CKOC and they would be going on about their football team's game against whomever and for the first time you realized that the home team they were talking about was not the Argos. That would make us smile when we heard the Ti-Cats were playing the hated Argos because you realized you were listening to a station who's focus was not Toronto. I realized how important that really was in a era before the internet to have a media outlet that was not pulling for your, team your city (Toronto).Something that even the great Mississauga still does not really have. True independence, is what those independent TV and radio stations along with many other Hamilton institutions helped create and its exactly that independence, which will provide the push that will keep Hamilton's resurgence continuing into the future.

What this means is that when the all-day two-way GO service starts, a large number of boardings in Hamilton will be for destinations in one of the three Burlington GO stations. Indeed, this may be the #1 destination city for people boarding the GO train in Hamilton.

Another way of looking at the statistics is to note that Hamilton has a net outward commute of about 23,100 out of a total of 201,000 workers. In other words, net job "migration" is only 11.5%, very far from the image of a bedroom community.

[Thanks to Kevin Love for the correction!]

I get slightly different numbers.

nearly 70 percent of the city's 201,000 commuters work in Hamilton itself.

38,340 people commute into Hamilton from other municipalities

Which does an even better job of proving your point: Hamilton is indeed very far from being a bedroom community.

Thanks for correcting my arithmetic mistake (I'd inadvertently added a zero at one point). Yes: the correct result is only an 11.5% net outward job migration.

Read this with open eyes and don't get angry. One has to think that MAYBE we are a bedroom community. Our pop. is somewhat large but ONLY due to amalgamation. There aren't really ANY skyscrapers downtown. Most buildings on the skyline are apartment buildings. The local news station can't even report on weekends or during the daytime hours, except morning and dinner. CHCH may not even be here in a year or two AT ALL. No 'Big 4' sports team. No major central business headquarters. The stadium is in a bad locale and LRT may not happen now. So the question is - how do we change this view?

I think that it's a bit more complicated. I completely agree that Hamilton has an important employment sector and must not consider itself "only" a bedroom community. However, I think that it is critical that Hamilton embraces it's role and position within the Toronto city-region.

Hamilton has many advantages over other municipalities in the region, but must not hamper it's prosperity by clutching at being "it's own city" separate from Toronto.

Hamilton: Bedrooms are the new steel