The Right Side of the Tracks (Part 2)

It's time to look forward and give future generations a vibrant city they will be proud to call home.

Last issue we discussed the history of electric transit in Hamilton. Richard Gilbert's peak oil report was referenced (although none of us have seen the darn thing yet - so much for democracy) along with his statement that Hamilton should seek to become the 'electric city' once again.

In a more perfect world, Hamilton would still have several kilometers of overhead electricity for use by modern streetcars and light rail trains, but we don't.

It's time for Hamilton to build a new electric transit system with capabilities for future expansion throughout the city. As Brian McHattie, Ward 1 Councillor, recently responded when I mentioned this idea to him:

I think we should be seriously looking at an electric option - certainly the cost and infrastrucuture required is daunting in the short-term but from an energy perspective, advantageous later on as the cost of fossil fuels rises.

So how could an improved HSR look with electric trolleys and streetcars? How about this: 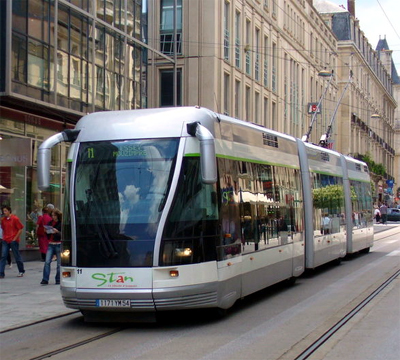 This is a bus-train, basically a train on rubber tires instead of rail tracks. The vehicle is designed to function exactly like an urban streetcar with a low floor that is level with boarding stations. The vehicle is guided by a centre track in the street and is meant for urban city streets, as shown above.

Phase One of a new transit system such as this in Hamilton could include an eastbound lane reserved for transit along Main Street from the northwest entrance of McMaster, along King St. through Westdale, and then over to Main St. to Ottawa St or Parkdale Ave.

The return trip would come west along King St. to Wellington St., where the system could jog south to Main St. and continue along Main to Queen St., where it would go north back to King for the return trip into Westdale.

The purpose of this route change downtown is to allow for street festivals and road closures along King St. from Wellington S. to Queen St. This is Hamilton's heart, and it deserves to be the centre for public events such as the Mustard Festival and Gore Park Music Festival. Unfortunately, today the city pushes these great events onto sidestreets so as not to disrupt the almighty speeding traffic on King.

(As a side note, that speeding traffic on King is not stopping or shopping downtown. How about some respect for those of us who are? Downtown businesses should be given the same treatment and preference by city hall as their suburban counterparts. Right now, that is far from the case.)

King St. and Main St. should also be switched to two-way traffic with two lanes each way. On King St., this would mean one lane of westbound traffic is for cars along, with the transit-only lane. Eastbound would have two lanes for rush hour, with street parking during off-peak times.

Main would be the same, but in the opposite direction.

The end result? Rush hour would see a total of three eastbound lanes and three westbound lanes, along with two lanes dedicated to busses and a new electric rapid transit system. 'Pullover' bays along the transitway would allow slower moving, local busses to pull over at stops so the new electric system can continue unobstructed.

Transit lights could be added at major intersections for quick movement of busses and trolleys. Right now King and Main offer four lanes of traffic in each direction when looked at as a combo (which they are). This includes transit.

My plan leaves the same amount of infrastructure for rush hour traffic, but allows for drastically slower car movements during the afternoon and evenings. Street parking satisfies the needs of local business districts, and suddenly two streets which are now dangerous and horrendous to walk along become pedestrian-friendly, slow moving and with greatly enhanced transit capabilities.

This, of course, will lead to a decrease in automobile use, further assisting the cause of balancing our transportation system as more people are inclined to use first-rate transit, cycle, or walk on city streets have become appropriate for any mode of travel.

Hamilton's most densely populated neighbourhoods exist within a five to ten minute walk of this east/west corridor. It would be a huge success if redone as proposed above, and would show urban businesses that they do matter.

Instead of always having their taxes taken to subsidize car-dependent businesses in the Meadowlands and other far-flung suburbs, lower city businesses would feel important again and appreciate the investment being made into their neighbourhoods.

Of course, new business would begin to see vibrancy returning to these walkable neighbourhoods as an opportunity for them to expand and join in the rebirth of our city. The suburbs aren't harmed in any way by this plan (other than not having free handouts from the urban tax base) and the image of our city would be drastically altered.

A second line more suited for mixed traffic would be a streetcar line from Pier 8, Pier 4, Bayfront Park up to Concession Street via James Street and the Jolley Cut. Turnaround could be the east end of Concession near Mountain Park. The Mountain's most vibrant urban neighbourhood would be connected to the city and James Street would benefit by this new service connecting the downtown to our waterfront.

I'm convinced that if Hamilton makes this step and invests into a first rate transit system, we will expand and grow the system for many years to come.

Portland, Oregon built their first light rail line and after seeing its massive success has embarked on construction of hundreds of miles of new routes and lines ? downtown, urban neighbourhoods to outlying suburbs and new transit oriented developments. The city has never looked back.

In Hamilton all we seem to do is look back to the glory days. It's time to look forward and give future generations a vibrant city they will be proud to call home, still appreciating the past, but loving the present and dreaming big for the future.

The report is available on the Hamilton Indymedia site here