The Right Side of the Tracks (Part 1)

One of the keys to Hamilton's future lies in its past.

As appears to be the case in so many different aspects of our society, going to the past is likely the best option to cope with the coming energy crisis in our future. 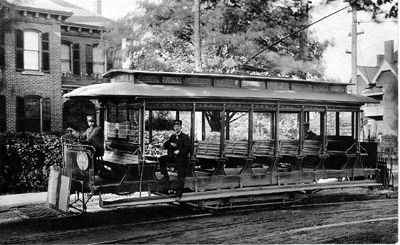 With gas at $1 a litre, some people talk as if the crisis is in full swing already. You ain't seen nothing yet. Recently I came upon a discussion blog regarding the history of Canadian cities.

It was fascinating to look at the old photos of Canada's cities and see how we once lived. It was also frustrating to see such vibrancy and civic pride being demonstrated in cities that have almost died today.

As one blogger put it, "We can thank our stupid car culture for killing our cities." He's right. What cars offer in personal mobility, privacy and comfort is more than offset by the damage they have done to Canadian cities, quality of life, civic pride and human health ­ both physically and socially.

Unfortunately, cars are here to stay, but with rising oil prices and dwindling supplies the discussion regarding transportation alternatives has finally begun to take root. This is good news, but in typical Hamilton fashion, we have discussion without action.

City council seems to be uneasy about a new report (well, it was new when it was completed a few months ago) that they commissioned to look into the future and see how rising oil prices might affect life in the Hammer.

The report is being kept from the public, although mounting pressure should change that very soon. View Magazine recently spoke with Dr. Richard Gilbert, the report's author, and asked him to share some of his ideas.

He struck a chord with me when he proclaimed that Hamilton should take a page out of its past and once again proclaim itself "The Electric City." Many folks don't know this, but Hamilton was the first city in Canada to develop electricity. Niagara Falls was the source and people came from all over to see the street lighting downtown.

Hamilton also had a fine network of electric streetcars and buses, as did most North American cities (until the US government allowed a consortium of oil and auto companies to buy up and dismantle them in favour of buses). 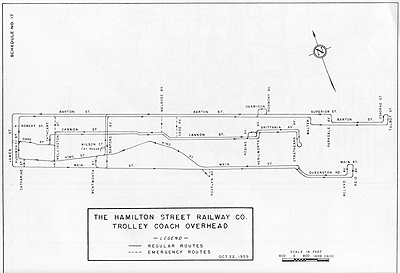 Hamilton developed one of the finest streetcar networks in the country and was well served from its far reaching eastern and western suburbs to major commercial districts along King St., James St. and Barton St. to the industrial developments along the Harbour. One could easily live in our city and get from point A to point B via transit and good walking shoes.

As Hamilton grew, so did the transit service. Eventually, cars came into the picture and became more common, but were kept in balance with the rest of the transportation network. Streetcars still ran down the middle of major streets and had the right of way.

Pedestrians were important enough to have white-gloved police officers at King and James keeping the peace between autos and crossing pedestrians.

Today we paint signs on the road telling pedestrians crossing on a green light to watch for cars screaming around the corner. Often, we don't allow pedestrians to cross the street at all so that cars can make unobstructed turns, such as the corner of Dundurn St. and King St.

Eventually the city decided to replace the old streetcars with electric buses, and a massive track-removal program began. I can only assume that this was done in response to the plethora of US cities that were ripping up track in favour of the "modern" buses of the day. 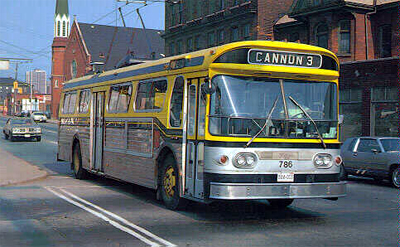 I remember as a kid all the wires and cool 'tether poles' sticking out from the tops of the buses. I used to love the snapping sound they would make upon crossing another track. Of course, these became somewhat of a nuisance with tethers falling off and getting stuck in icy weather. It was quite obvious that gas and diesel would be the next step to power our transit system.

To the average Joe, these changes were probably looked at as "modernizing" our city and keeping up with others. Kudos to whoever in Toronto had the foresight to leave the streetcars alone.

Soon, Hamilton's rumbling, polluting yellow buses became the norm and transit ridership began to decline while car ownership soared. Again, I realize the car was here to stay, but Hamilton made a big mistake by betting the farm on private automobiles. More on that in a moment. 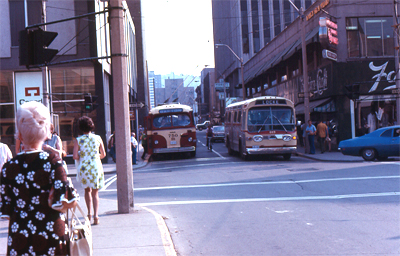 Buses, pedestrians and a cyclist on Hughson at King in 1972 (Photo Credit: http://ca.geocities.com/hsrtrolleys@rogers.com/Trolleys.html)

Hamilton had a wonderful streetscape of buildings with shops, services and eateries at street level and upper floor offices and residences. This was the normal method of city-building as seen all over the world for centuries.

People feel comfortable walking on streets like James (above picture) South. Today, we see huge amounts of empty land downtown in the form of surface parking lots, lots that were a necessity to house all of the private cars coming into the city as the transit system was decimated. Try walking along Wilson Street or Rebecca Street and see how enjoyable it is.

Where good transit has abounded, so have pedestrians. And it is pedestrians, not speeding cars, who shop at local retail outlets, cafes and galleries.

Hamilton City Hall has effectively told business owners in the lower city that they are on their own. Unless you own a big piece of land that can accommodate a parking lot, your business won't survive in our city.

That's not because there aren't people in the urban neighbourhoods, but because downtown taxpayers, both residential and commercial, have been subsidizing the suburbs for decades.

The shop owner on King East with no parking is subsidizing his competition in the suburbs with a huge lot. The result? People realize that to live in Hamilton, a car is necessary. And with our one-way highways roaring through town, it is easy to get out to the suburban malls and plazas.

Suburbanites in Hamilton still hold to this antiquated notion that folks downtown have no money and don't buy anything "nice". Everyone I know in downtown Hamilton has a great home or apartment with cool furnishings, stereos, and so on. I regularly see people in my neighbourhood with shopping bags from suburban malls, not because they want to go out there, but we've been given no choice.

All through Hamilton's history, people shopped in their neighbourhood. People walked, biked or took transit to the local stores and services. Streets were enjoyable to stroll along due to the slow traffic, streetcars with the right of way, and enjoyable streetscapes.

Is it any wonder why businesses aren't opening and flourishing along Main or York? Who wants to walk or sit and sip a tea on the shoulder of a highway? So all the locals get in their cars and trudge out to the boonies.

This isn't to say that downtown Hamilton is dead. I do virtually all of my shopping and dining in the downtown core, and love it, but I have to wince at bouncing transport trucks, wait for buses that never seem to come and cycle on streets designed for one purpose ­ moving cars along quickly.

Become an electric city once again won't just save us money as oil prices increase, It will also enhance quality of life and business in our city.

Every successful city has a successful transit system at its core. Transit users become loft-owners, shoppers and patio-dwellers. Speeding SUVs from Eastgate to Mac do nothing but pollute and shun business and people from using our city as it was designed to be used.

Hamilton was built as an electric city. We should hire local firms to build the tracks, streetcars and overhead cable systems and remove several lanes of vehicle traffic in favour of wider sidewalks, more trees and transit-only lanes. The electric city would certainly be a successful one. 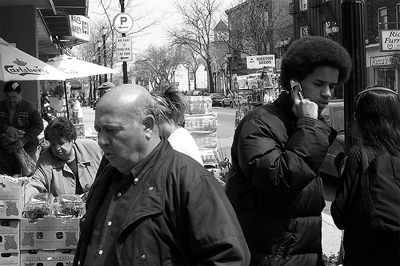 (Next issue: Part 2 will describe how Hamilton can move forward with a new electric transit system.)

Jason, Off topic, but what happened to Baroli's? It's closed already. That didn't last long!

I'm not sure...although there were signs that they owner wasn't in the best shape before it even opened....possibly the lack of people at that end of the mall too...the east end is busy as heck...not so much at that end....they needed a street-facing space.

Yes, you're probably right. The speed and quality of service was appaling anyway.

I think the chlorine smell is going to do in any food business that locates there. It is sad, because it is otherwise a pleasant atrium.

speaking of cafe's... I remember jason you mentioned in one of your downtown updates about this spanish cafe that served churros in jackson square... that also didn't last very long. I wonder why.. i kind of liked their business concept..

I can only assume that big bad Horton's ran out the Spanish cafe..again, places like that need street presence...and then they have to know what they're doing. This Colombian Coffee House at King and Bay is a fine example of potential gone wrong. I've been to Colombia and was hoping to see a traditional Spanish cafe there - Cafe con leche - the traditional coffee drink in Colombia. Basically coffee with steamed milk. I make them at home for crying out loud. The guy at Colombian Coffee House has a sign offering 'A real Canadian coffee blend'. Heck, I can go across the street to Tim's for that. Too bad - lots of potential for a cool, spanish cafe in Hamilton. Papagayo has done well on the same stretch as authentic spanish food. Colombia Coffee House missed the chance to join them.

With Columbia Coffee House, what was lacking was décor and ambiance. I popped my head in, but the fluorescent lighting took away any possible warmth in the space. It is a shame that they dumped a pile of money into renovating that space, but still did not make it seem like a place you wanted to spend time in. I think I was more likely to go there back when it was still the Tavern.

I really enjoyed this article. Nice one. I took the liberty of quoting you on my blog. Linked and everything. I live in Brooklyn, NY and the five boroughs are still an electric city. However, one could argue that its electricity is slipping a bit. Lets hope that trend does not continue.

Washington, DC and Alexandria, Virginia were also, at one time, electric cities. DC is attempting to reinvest in its "town center" but is failing, though it doesn't know it yet. All of the re-development has a sprawl mentality and is grossly gentrified. They aren't doing anything to galvanize the public transit. It is an incongruous effort.

Alexandria, Virginia had a trolley car system as well. What I only learned recently is that the George Washington Parkway, that runs the length of the Potomac River to Mt. Vernon once had a cable car track running its full lenght. I can't help but wish that it still did.

I don't think ANY city with electrified public transit and/or Rapid Transit is losing their downtown business. If ANYTHING it is REVITALIZING it!