City to Install Only Three to Five Pedestrian Crossovers This Year

The excuses keep changing, but the pattern of inaction continues year after year. It is past time for staff priorities to start matching what citizens are demanding. 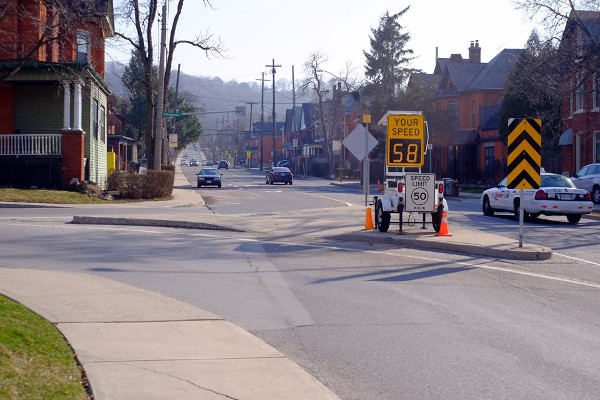 Mobile speed radar at Herkimer and Queen, one of the first locations to get a new PXO (Image Credit: Kirkdendall Neighbourhood Association)

Even though "money is not the issue" according to staff, since the project is being funded out of the Red Light Camera fund, they say this is all they can do.

This seems to be a recurring theme, as staff recently said the same thing about the Claremont Cycle Track, which Council directed them to expedite, but which will still somehow take two years to install despite already being in 2009's Cycling masterplan.

This 'overwhelmed even if given more money' claim seems to be turning into the new go-to excuse after years of 'there is no budget' and 'the regulations won't allow it'.

The main argument for PXOs has been that with their lower cost and simplicity, the City would be able to install a lot more of them.

The most expensive PXOs cost around $20,000 to install, a small fraction of the approximately $150,000 cost of a pedestrian-activated traffic signal, which was previously the only kind of controlled crosswalk the City would install.

Another reason provided for the very slow rollout is that it allows motorists to become acclimatized to the new PXOs and gives police an opportunity to do public education. But that just doesn't make sense. It is easier to get used to something when it is common enough that people actually experience it.

How will as few as three crosswalks scattered across the city help motorists to get used to them? They would be so rare that most motorists would never encounter one!

The excuses keep changing, but the pattern of inaction continues year after year. It is past time for staff priorities to change to match what citizens are now demanding.

What is the real problem here? I used to think it was council, then there was a period when I was convinced it was staff. Then I thought it was council again. But now I'm coming back to the staff issue.

But this time I wonder if it's actually about management. From what I've seen, the staff who are in positions to get things done are terrified of doing anything because their managers will get mad.

Meanwhile the managers hide behind pseudo anonymity because no one seems to know who is actually responsible for what... a serious problem.

No because staff is terrified of doing anything.

decision making in city departments is very controlled, highly bureaucratic, and generally manipulated by politicians. it's a very problematic situation.

The only way staff priorities change is if the staff changes...which means people have to vote, and it appears as though people in this city don't care enough about these issues to make a change...only the people on this site.

Talk about misunderstanding.. staff are not voted in, and councillors are not the people who are being referred to when one says "city staff".

The staff have been beaten down by years of being terrified of old angry white men on council, and they have lost the ability to do any real work, even though the council seats are slowly being filled with more progressive minds.

Since when is an interest in an economically and culturally vibrant city "special"?

Ryan, Jason, Kevin et al to go out and run for office, to be the change they so lovingly advocate

It's a very naive view of the world which imagines that change and improvement are only brought about by politicians.

Imagine a world in which people waited to be elected before trying to influence their world for the better. Do you like what you see?

What is truly amusing is that the anonymous commenter is quoting Ghandi... who never held any political office.

Who is performing a community service? You? By posting worthless drivel in the comments section? Or are you in fact a councillor - who thinks that showing up, sleeping through some meetings, voting however chad collins votes (and being paid 75 grand a year) is "community service"?

right, they're paid more than that. point being, they aren't volunteers performing a service. they are paid for their work whether they do any or not. That's not community service. Unless you were referring to the service you provide by posting asinine comments here?

He didn't nail it. Staff don't change with the elections. For the most part they are lifers, and do what they always have done unless there is strong direction otherwise from council and management. It's a bit like turning an ocean liner. I speak as a a retired municipal employee.

As for Ryan et al, i think this forum has elevated the level of discussion around urban issues. It's refreshing to see arguments based on evidence rather than emotion and "feelings".

The lifer comment has a limit: namely, who the lifers might be. I would actually speculate that Hamilton has a higher attrition rate among its mid-level managers than many comparable municipal organizations. We've seen an awful lot of very good professionals depart this town for more pleasant work environments where their expertise is respected and acted on over the past ten to twenty years.

yep - the best of them leave, the rest do whatever necessary to stick around and not get hassled :-(