We have all these progressive visions and master plans in place but when it comes time to do the work at street level, none of it seems to matter.

For the past few weeks, King William Street has been closed to automobile traffic at James Street to allow for the construction of the new Templar Flats building on the north side of King William between James and Hughson. 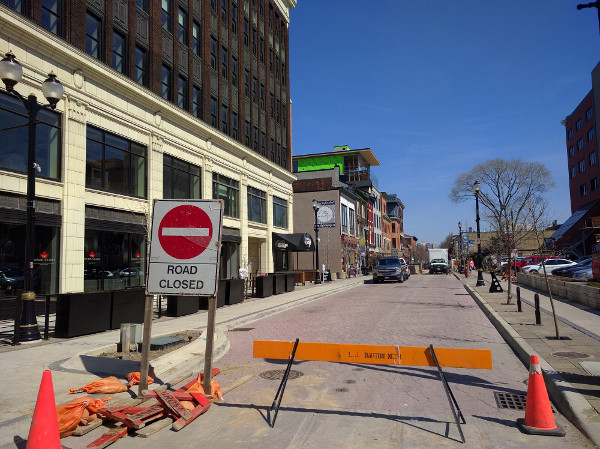 Clearly this closure has had no detrimental impact on automobile traffic. The City should consider permanently closing this block to vehicle traffic and pedestrianizing it. Given that the City wants this to become a "restaurant district", having space to operate outdoor patios and encourage strolling will only help make it even more attractive.

To further support traffic calming and active transportation, the next block of King William, between Hughson and John, should get a westbound contraflow bike lane, and King William east of John to Mary Street should be converted to two-way traffic.

To accommodate eastbound vehicle traffic, the last block of Rebecca Street from John to James needs to be converted back to two-way as well. The section from Wellington to John was reverted to two-way in late 2014.

Currently, there is very little accommodation for westbound bicycle traffic through the north part of the downtown core, and this is an easy way to release a major bottleneck.

All of this can be done with minimal street changes. The traffic signals at John would need to be updated, and the intersection at Catharine could be switched to a four-way stop if a traffic signal upgrade is too expensive.

According to Ward 2 Councillor Jason Farr, he has only heard from one business owner on King William about the closure. To mitigate any inconvenience to local businesses, the block could still allow local deliveries and pick-ups, similar to the south leg of King at Gore Park.

And for customers who drive, there will still be a parking lot right at the southeast corner of James and King William.

Another way to alleviate parking concerns is to reclaim the curbside space on the next block, which is currently reserved for fire emergency vehicles but almost never used, and even then only by administrative vehicles.

The good news on this front is that it sounds like this issue is going to be resolved. According to Councillor Farr, "We solved the Fire Department issue last week. They'll all be gone soon."

The big question is: how do we make this happen? Is there anything we can do during the current closure on King William to study the traffic impacts? This is a great opportunity and I think the data will show that there would be no negative impacts. 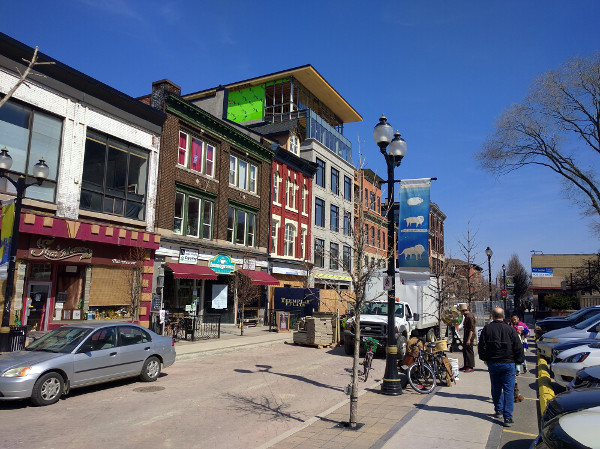 The road closure is scheduled to end on April 24, one week from today. I worry that we may have already missed the opportunity to take full advantage of the closure.

Already a concrete bumpout has been re-poured, making it more difficult to install a westbound contraflow bike lane. From my perspective, it feels like these opportunities were never even considered when planning this work. It is extremely frustrating to see us dig up the road only to replace the status quo without question.

It really seems like there is simply no process available to do any progressive thinking or design. If I'm approaching this the wrong way, I have no idea what I should do differently as a Hamilton citizen and nearby business owner.

Our councillor is supportive of exploring options, yet City staff remain silent and there is no process for providing input. Is it a management issue? A policy issue? We have all these progressive visions and master plans in place but when it comes time to do the work at street level, none of it seems to matter.

The cost to make the changes to King William are completely marginal in relation to the roads budget, and doing this the right way will actually save money in the long run if the service life of the pedestrianized Street is lengthened.

Is there nobody at City Hall who has the desire, the resources or the authority to consider these kinds of opportunities?

Great article. We need to get way better at simple improvements as part of routine public works projects. I have one small point to make:

"The traffic signals at John would need to be updated, and the intersection at Catharine should be switched to a four-way stop because there's no traffic on either King William or Catharine."

Fixed that for you

Nobody so far has stood up and said this is a bad idea, the question is how do we actually get things like this done? There is no process...

This can be the first baby step for downtown Hamilton's car-free zone.

Ya cuz Gore Park is farrrrrr from a car-free zone.
Is no one else disappointed with that project? Cars still roll through 24-7.

Hamilton, where a good old-fashioned Can't Do attitude is always close at hand!

yep. Let's have a pilot project on things the rest of the world have been doing for 100+ years. Just in case it doesn't work anymore....

Utrecht's downtown has been car-free since 1965. And the car-free zone keeps steadily expanding because local people demand it.

I like this idea. Minimal input for a pretty good return. The parking lot at James/King William's gotta go, though. It won't feel like a trendy spot unless there's development on both sides.

agree 100%. the parking lot we are speaking of is owned by A. DeSantis, one of Hamilton's greatest suburban developers. re-development is probably a long way off :/

Everything is for sale.

...but if the price is too high (and I'm guessing the guy would want a fortune for it), it's not viable. How long has it been a parking lot (and owned by this guy)? Is expropriation a viable option?

no clue on how long it's been a parking lot or how long DeSantis has owned it.

We need an energized mayor and councillors, not career politicians

I have a better idea. Why don't we just make MAIN KING and CANNON a highway and block all cars from driving anywhere else. After all, most Hamiltonians drive, and they LEAVE the city to work (or they don't work at all) so once they get home they should just enjoy the walkability of there core.

^First day?? Main, King, and Cannon are already highways, and arguably freeways. We have taken away a lane on each of theses highways in the last two years, and they are still borderline terrifying even during rush hour.

Years ago there were plenty of ideas on how to fix the the ailing downtown. One idea was to remove all the buildings on the north side of King between James and the Right House building, making King William the new street wall and a community square in between. Sort of like Yonge and Dundas square in TO.