There should be multiple points of entry/exit to the Claremont cycling facility, especially given how badly the Claremont Access has fragmented the lower city neighbourhood where it originates.

City of Hamilton staff are saying it will take until 2017 to design and install cycling infrastructure on the Claremont Access after Council voted in December to expedite the project after cyclist Jay Keddy was killed in an apparent hit-and-run.

There is no reason for this project to take two years (or longer - cycling projects in Hamilton have a nasty habit of falling off the table year after year). With some dedicated resources, we could certainly design and build a high-quality protected facility in time for use this summer.

One of the design considerations that we're told will take two years to resolve is the question of how to connect a Claremont Cycle Track at the bottom and top of the escarpment. The following is a review of the bottom of the Claremont with suggestions for how to connect it to the existing transportation network. (A subsequent article will review the top of the escarpment in the same way.)

One thing to make clear is that there should be multiple points of entry/exit to the Claremont facility, especially given how badly the Claremont Access has fragmented the lower city neighbourhood where it originates. A single exit point would not be able to provide a convenient access for people riding bikes from multiple origins and to multiple destinations.

Here is an annotated map of the bottom of the Claremont Access with various numbered points. I explain each numbered point in turn. 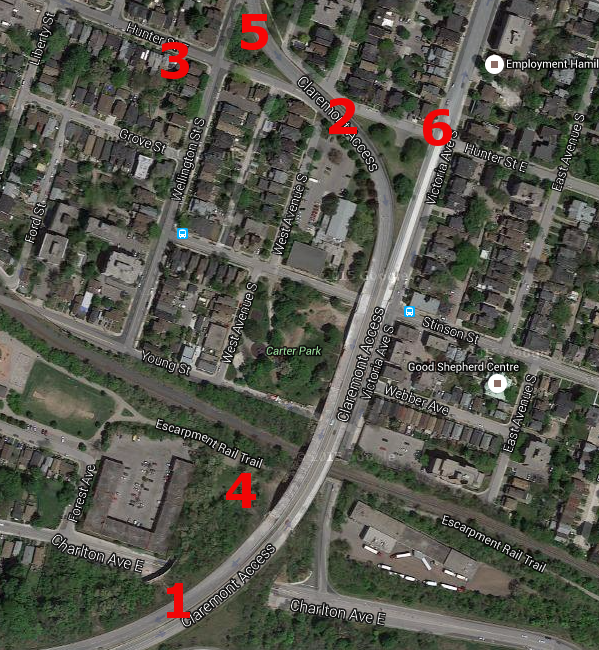 The protected lane itself is very straightforward to implement. Just take the westernmost upbound lane of the Claremont Access and physically protect it with jersey barriers, or raised modular concrete barriers that can handle a collision from an automobile. 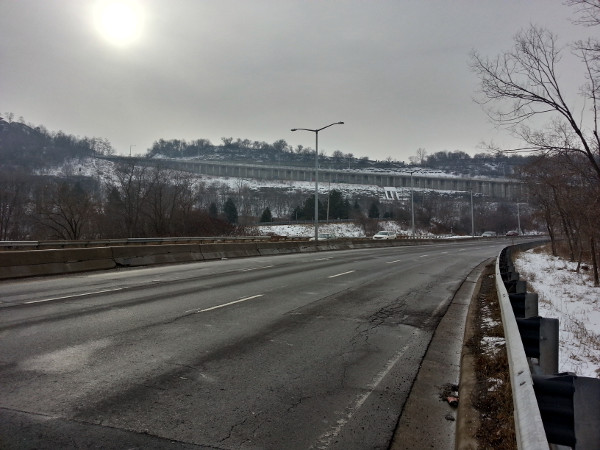 Looking up the upbound Claremont Access, the right lane would be the protected lane 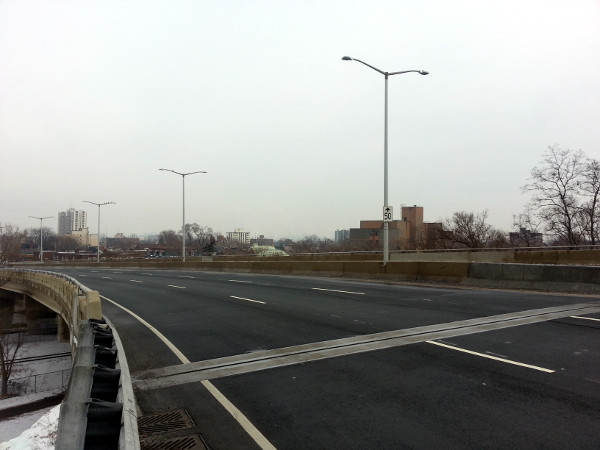 Looking down the upbound Claremont Access, the left lane would be the protected lane

It seems to me that the first priority for an exit to the protected route at the bottom of the access is to connect it directly with West Avenue South. 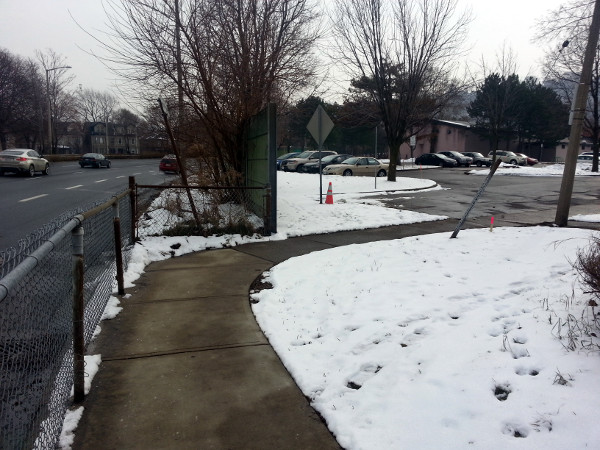 Southeast of West Avenue, there is a concrete wall beside the left lane of the downbound Claremont access. A couple of panels would have to be removed to connect the protected multi-use path to West Avenue. 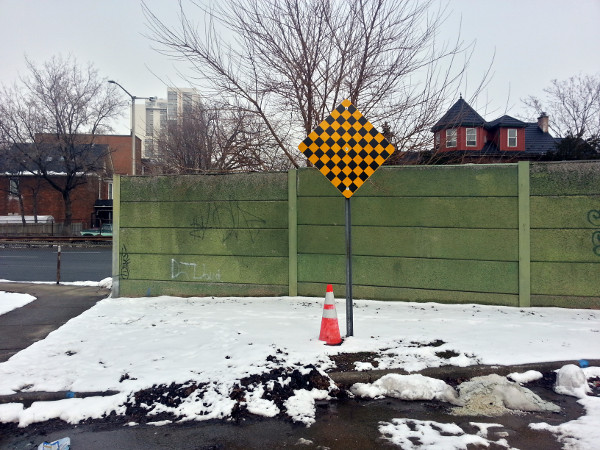 If we zoom in on the satellite view, you can see how this would work: 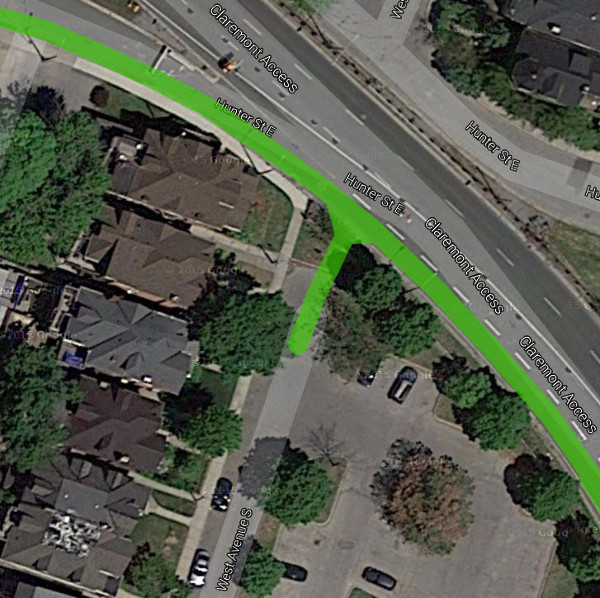 From this exit at West Avenue, it's a block south on a quiet side street to Stinson Street. Stinson doesn't have bike lanes here, but it does have sharrows to mark it as a designated cycling route. 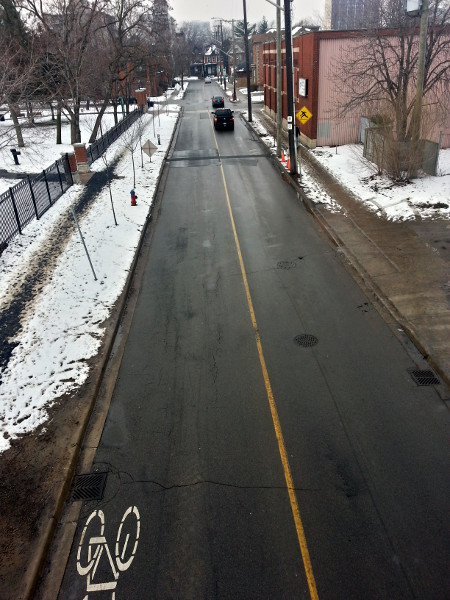 Continuing east on Stinson, you can ride under the Claremont Access to ride through Stinson Neighbourhood. East of Victoria Avenue, Stinson even gains bike lanes all the way to Wentworth Street.

If you continue farther south, either on West Avenue or on the path through Carter Park, you connect with Young Street. 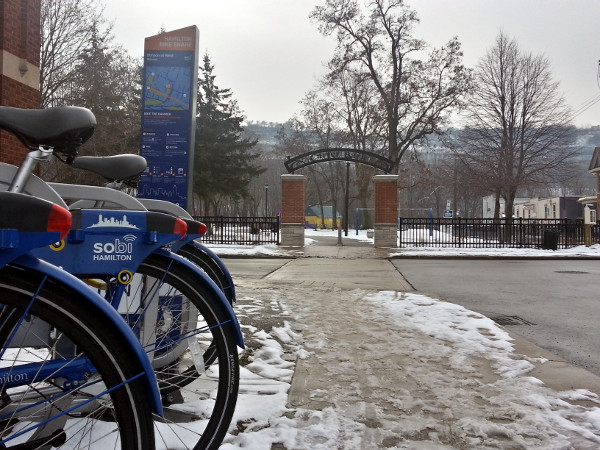 Young Street could easily be a nice cycling route, except that it's one-way eastbound east of Wellington Street south so you can't legally connect to the bike lanes on Young that run under the TH&B rail underpass between Wellington and Ferguson. 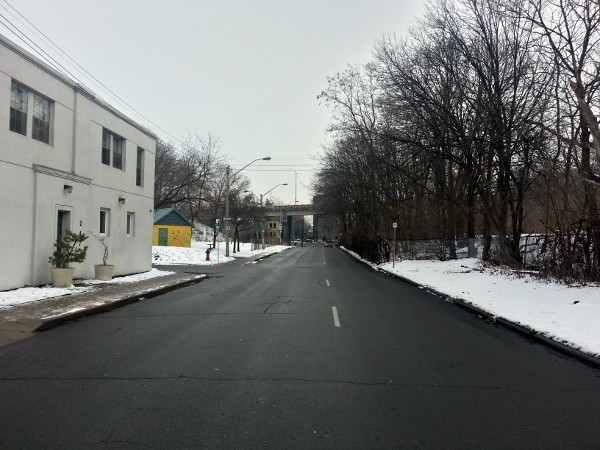 This street is three lanes wide gets a trivial volume of traffic. It would be nothing to convert this to two-way - or at least add a westbound contraflow bike lane - to get people back to Wellington, where Young is two-way and has bike lanes. 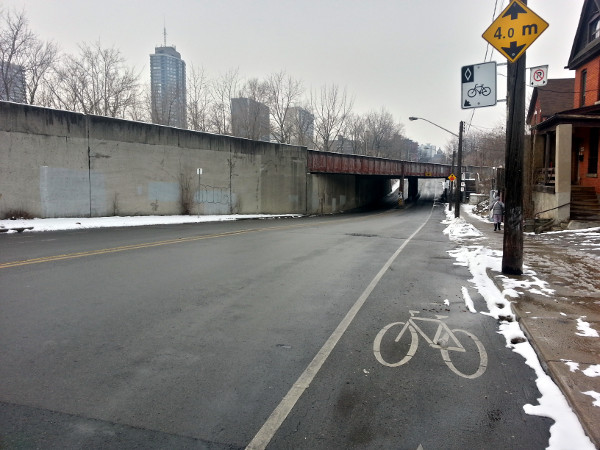 That, in turn, connects to the Escarpment Trail at Corktown Park and the Ferguson Avenue cycling route. Ferguson does not have actual bike lanes but at least offers a low-speed, low-volume road for less stressful cycling (until you get to Main Street, that is). 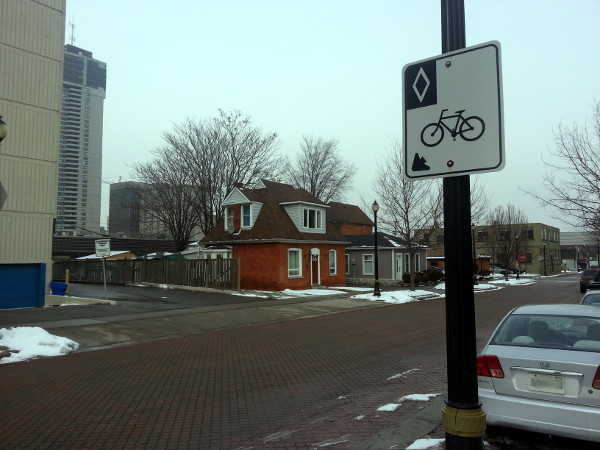 You also have to deal with the annoyance of being instructed to "dismount" and walk your bike through the Ferguson tunnel under the TH&B tracks. 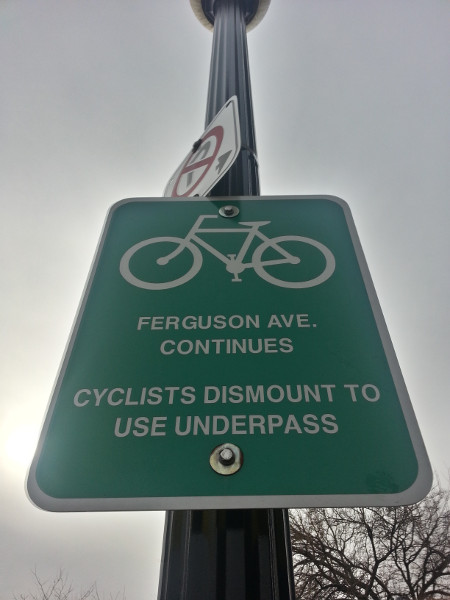 As a driver, I can assert that I have never once been instructed by signage to get out and push my car through a tunnel or across a street.

Going back to item #3 on the map up top, a second high-quality connection at the bottom of the Claremont is to continue the protected bike lane west on Hunter and connect with the Hunter Street bike lanes, which currently end at Liberty Street. 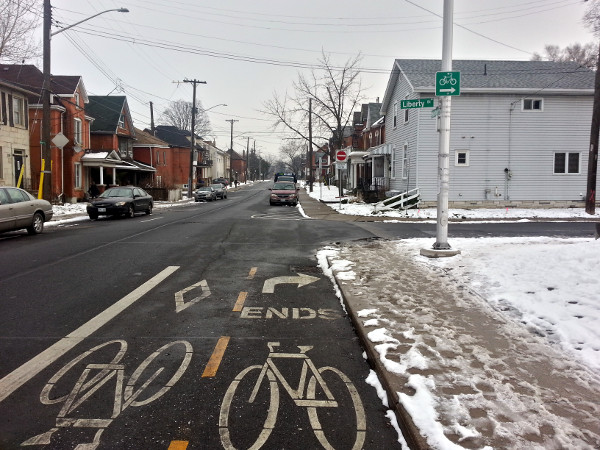 We're talking about less than two blocks of a quiet stretch of Hunter between Liberty and West Avenue - it would be very easy to continue the protected lane west, occupying the south lane of Hunter, to join the bike lanes at Liberty. 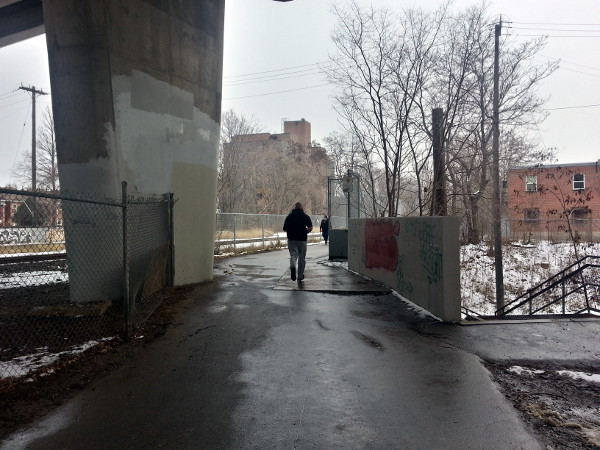 On the west side of the raised access, there is a hill that runs from the side of the Claremont down to the Trail. From the desire path stamped into the snow, it's clear that people are already using this as a walkway. 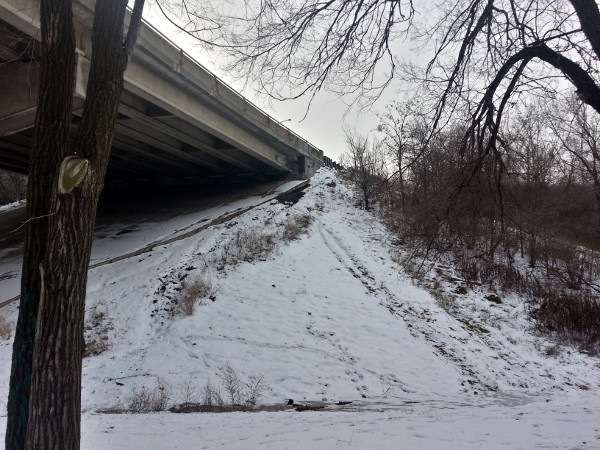 I can't imagine where you would currently walk once you get to the top, but we can safely assume that some people will want to exit the Claremont path onto the Escarpment Trail - especially if we designate it as a multi-use path or otherwise accommodate walking rather than making it exclusively a cycle track. (In fact, in the absence of other convenient alternatives, people will use it for walking even if it is exclusively marked for cycling.)

The hill is too steep to serve as a direct cycling route for most people, but it may be possible to build a paved switchback path up and down the hill.

Another option would be to add a staircase with a bike gutter. There's already a little-known staircase with bike gutter at this location, running from the Escarpment Trail level down to Victoria Avenue South just north of Charlton Avenue East. 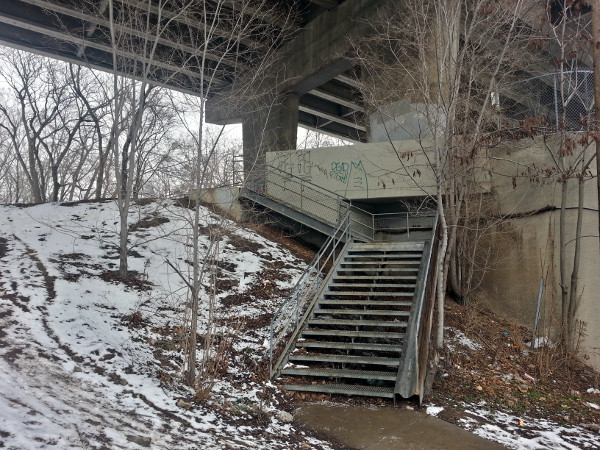 In future, a possible cycling connection on Charlton Avenue could extend west from here to the the bike lanes already in development between James and Dundurn.

This really is a no-brainer, but in Hamilton we will probably have to fight tooth and nail to get the cycle track extended north on Wellington Street to connect with the Waterfront before the heat death of the universe.

Overall, Wellington and Victoria are nine lanes wide and carry a combined total of around 25,000 cars a day. That is just an insane waste of scarce resources. We're paying to maintain around twice the lane capacity that this traffic volume needs.

Follow the same general design as the Cannon Cycle Track and we could quickly and dramatically extend the usefulness of the Claremont path by extending it all the way north to directly connect the upper city with the waterfront.

Finally, few words about Hunter Street, which has been cruelly brutalized by the Claremont Access. As a longer-term project, it would be great to turn Hunter into a continuous east-west route across the Access for walking and cycling.

There's actually a sad, orphaned little segment of Hunter between the Claremont Access and Victoria Avenue that is blocked by guard rails on both sides. 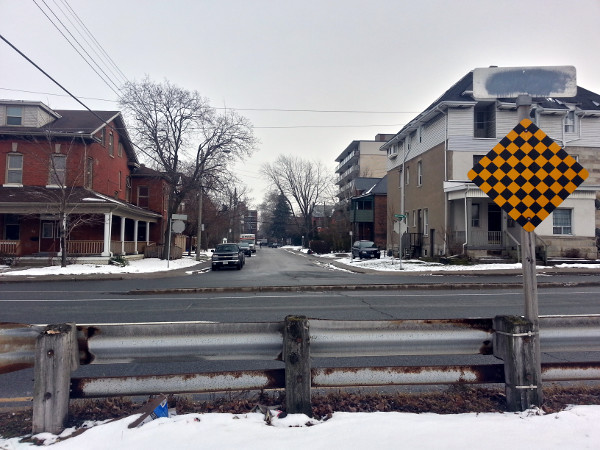 Looking east across Victoria from the orphaned segment of Hunter

This would likely require a signalized intersection at Hunter and the Claremont Access to allow walking and cycling traffic to cross Claremont east-west, but the traffic signals could be timed with the signals at Wellington and Main so they are minimally disruptive to upbound vehicle traffic.

That connection would do a lot to help knit the Stinson Neighbourhood back together after it has been so traumatized by the appalling road design compromises that were made to create the Claremont Access in the first place.

It's 2016, and the benefits of keeping Claremont Access as a limited-access freeway to not justify the real damage it has done to neighbourhood integrity and local accessibility for all modes.

Instead of looking for obstacles, reasons why it couldn't be done, you chose the opposite tack and found a way it can be done economically and quickly!

As the Cannon cycle tracks show, if they make it safe, people will use it.

Why two years to create the bike lane on the Claremont Access. When they block lanes off for construction they get it done in a few days-like they recently did on Claremont. Those concrete barriers could create a temporary bike lane quickly. They could then work out the rest of the details once there is a safe way up the access.

Yup, put it in without thinking about how it would work. And you complain that city hall is incompetent. Lol

Better yet, think about how it would work but don't take 2 years to do it!

Kevin's comment: This is a violation of the CROW standard. The reasonably foreseeable volume of cycle and pedestrian traffic make this inappropriate, particularly given the high speeds people will achieve going down the escarpment. There is plenty of room to construct a sidewalk for pedestrians. That is the correct solution.

Indeed, many of the existing multi-use paths have volumes of cycling and pedestrian traffic such that an additional sidewalk should be constructed for pedestrian use. One example is Lakeshore.

when I think of a multi use path here, I assume we're talking a cross section like this:

With appropriate signage, separation through knockdown sticks or benches etc...

Cross section could be in this sequence: pedestrians / uphill bikes / downhill bikes.

Uphill bikes would provide buffer space between the pedestrians lane and the downhill bike lane. Pedestrians would be on the southmost edge (scenery), and fastest moving bikes should be on the northmost edge (next to the jersey barrier dividing them from Claremont traffic).

Or it could be two lanes organized by relative speed of transport: pedestrians & uphill bike riders (typically would go similar speed up Claremont), versus downhill bike riders.

Either way, some kind of separation could be involved (e.g. raise curb, smaller barrier than a jersey barrier, mini rumble strips designed for bike wheels, etc) could protect pedestrians. I trust that a good solution will be found.

As you point out, the lane capacity of Wellington and Victoria is far greater than is needed for the traffic they carry. So my more ambitious proposal is:

Something like this, then (parks or not, the point is the changes in road structure): where cycle tracks are red, upbound care lanes are pink, downbound car lane is yellow, regular bike lanes are blue. (The second downbound lane exits to Charlton. Victoria could pick up another pair of lanes at Main St.)

Timing of removing those curves, may take a lot longer though (e.g. after A-Line LRT extension) but who knows? I'm all for it as it is overengineered.

Great ideas everyone! I love the quality of discussion here.