The York Boulevard curb lanes have been cleared of snow for decades, but now that they are bike lanes, they have become snow dumping grounds.

Hamilton experienced the first significant winter weather of this season in the week between Christmas and New Year's, with an overnight storm starting December 28 that dropped a few centimetres of snow and some freezing rain on the city. City workers and contractors were busy clearing all major streets on December 29, but something strange happened on York Boulevard: the curb lanes, which were recently converted to bike lanes, were left covered in piles of snow and ice.

Only the "space buffer" between the bike lane and the next vehicle traffic lane was left clear. The following photos were taken on December 30, two days after the storm. 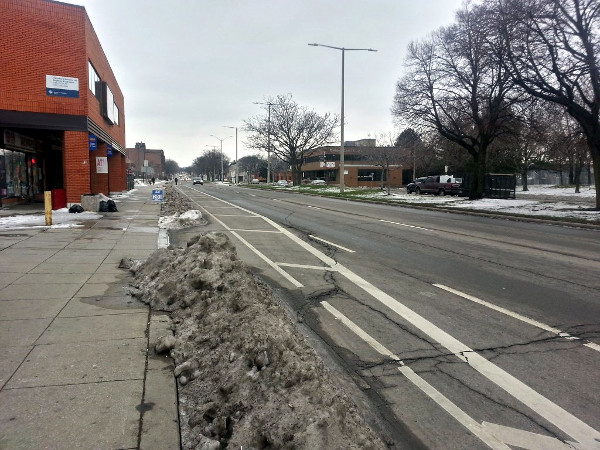 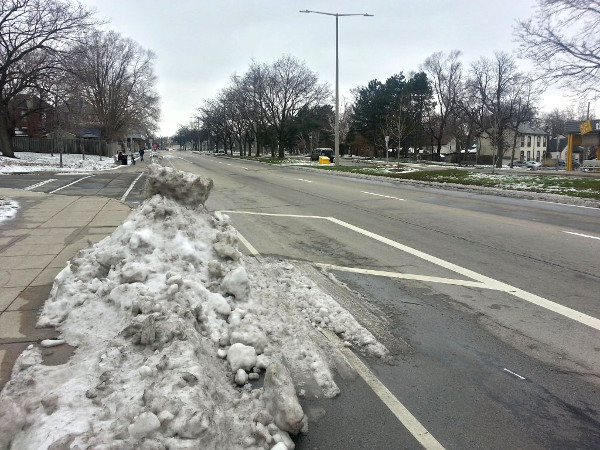 When these were vehicle lanes before the bike lanes were added, you can be sure they were cleared of snow so people could drive on them. But now that they're bike lanes, we leave them covered in piles of snow and ice.

Farther east, where there is no buffer, the bike lanes were still piled with snow. 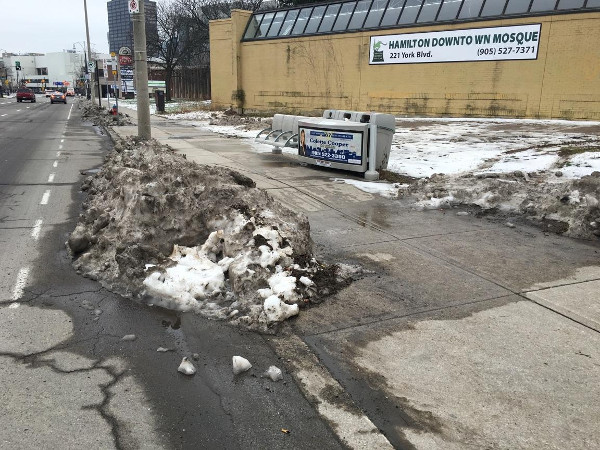 In some cases, it was just piled up close to the intersection, like this bike lane-blocking pile at York and Hess: 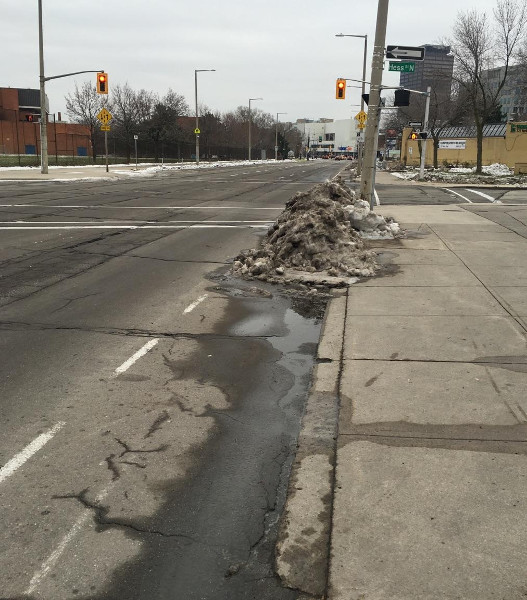 Interestingly, east of James where York changes to Wilson and there are no bike lanes, the curb lanes were cleared of snow and there were no ice piles left to block the lane. Instead, snow was piled on front lawns and the corners of parking lots. 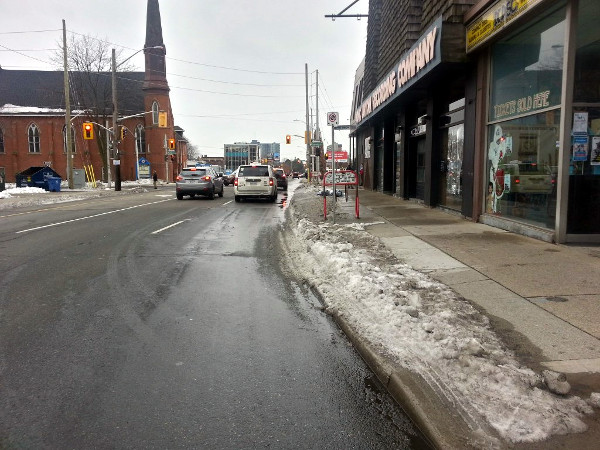 Now, with a four-day stretch of mild/wet weather approaching, I'm wondering if we can finally get the bike lanes around the city cleared of the ice mounds that have been sitting on them ever since the December 28 storm.

More cold weather will be on the way next week, and if we don't remove these piles of ice, they will freeze solid again.

Ever since York Boulevard was converted to a six-lane highway in the 1960s, all the lanes were plowed as a matter of course. Now that the curb lane is a bike lane, snow-clearing crews are piling snow from bus stops and parking lots into the bike lanes. This is unacceptable.

But as noted, once you cross James Street on Wilson, heading east, there are no bike lanes and magically bus lanes and parking lots were cleared with no piles being left in the curb lane.

I was personally hoping that a Bobcat would clear all of our bike lanes, which would result in these piles being placed on the painted buffer along York. This would be fantastic to have a long row of ice banks to temporarily protect these bike lanes from traffic.

We currently have something like that on the Hunter Street bike lanes, which are a full lane wide and can accommodate a pickup truck with a snowplow but don't have any physical protection from the vehicle lanes, aside from a few knockdown sticks just east of MacNab Street. 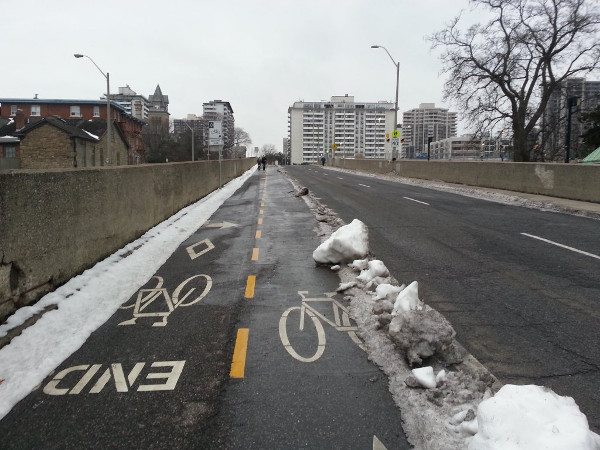 I would hope that staff can be directed to clear all major transportation lanes the same way - not just the ones that house moving cars, or parked cars.

Kind of laughing at "something strange happened on York Boulevard". Yes, so strange!

Lol...glad someone caught that.
A giant mystery. A clear accidental oversight....

I was thinking about this today as I rode down York. Who should I call/email/write to "inquire politely" about cleaning up the bike lanes? I love those freakin' Bobcats, and they'd be perfect for the bike lanes.

Jason Farr is the Councillor for Ward 2.

It's hard not to think that the crews are being malicious or at least perverse, but I dare say it's merely lack of any thought for cyclists.

A related problem can be found on the King Street bridge: ice slicks. While the pedestrian/cyclist lane has been cleared of snow, the snow is melting during the day and freezing at night into thin, slippery patches. All it would take is some salt. But I'm sure that the city crews haven't thought of it nor do they cycling the route themselves.

I emailed ward 1 councillor Aidan Johnson about the ice last night. When I crossed East over the highway at lunch today, I found the bridge and the bike lanes to the West of it salted, with the slicks melted or crumbling.

I only hope that this can become routine maintenance and not something someone has to whine to a councillor about.

if any of this ever becomes routine maintenance it will definitely be front page news.

Everyone knows that nobody rides their bikes in the winter so why bother clearing it?

Anyone have a salt spreader that could be towed with a bike? :)

That is actually a really good idea! A bike could pull a small hopper with a simple lever to open it over any icy areas. Low cost, low emissions and we all get to watch a public works person riding a bike in the winter!

I complained to Councillor Aidan Johnson about this on December 30th, he passed my concern along to staff. 8 days later and the bike lanes remain obstructed.

Hopefully, ploughing these can become part of the routine rather than something that has to be complained about all winter.

To be fair, I think this kind of half-assed snow-clearing is what cars actually generally get, and for cars it actually works okay as curb-lane buses and trucks and cars act as ploughs themselves.

With only occasional curb lane vehicles pulling over, instead of properly packing the snowbanks they spread them around into hazardous bumps thoughout the bike lane.

So no, I don't think city staff are doing any worse job they were when it was a car lane - at least not in intent. The outcome is obviously quite different, though.

However, the whole justification for unprotected lanes is ease/cost of ploughing them with full-sized normal city ploughs. If the city is going to use ploughs as a justification for leaving bike lanes unprotected, then they really ought to actually properly plough them.

Fortunately, I bike the exact route Ryan describes as "they did an okay job here" - last year Dundurn North was a death-trap, this year its been quite well done. And there's only one flattened snowbank I have to curb-hop onto when traveling Westbound on York Boulevard. And as always, they have done an execllent job with the Cannon track.

let's also keep in mind we've only had one winter event with 4-5cm of snow/ice. The photos of York/Wilson above were taken 2 days after the 'storm'. Wilson was clear as a bell right to the sidewalk curb as was Main, King etc... the only lanes I could find with big piles of snow in them were bike lanes. I told Ryan that had the city simply done nothing, it would have been better than actually piling up huge mounds of snow into the bike lanes. With only a few cm and mild weather the following couple days the bike lanes would have cleared up on their own.

Hi, I live on a street which hasn't been plowed once this year. Our street has a school and a rec centre on it. Should I submit an article here also?

An article with pics would be great. Just for clarification, my street hasn't been plowed at all either. I don't think we've had enough snow to warrant any plowing yet. But in school zones I've noticed they clear the sidewalks, crosswalks, salt everything and even use sweepers if needed to get the sidewalks and pathways clear. If they've not been doing this in your area, it's definitely a problem.

A typical active school definitely does raise the priority of the street, given the number of kids being driven to school, and school buses, that need safe access. Sounds like a serious omission. Unplowed sidewalks are an issue, but unplowed access to school is another level altogether. Pictures of this during snowstorm height is also important, as a picture is worth a thousand words.

If it's just a dusting during the Holidays, that's one thing. But if it's currency icy for days while kids are trying to cross the street to school, dodging dropoff cars, adding major safety issues -- that's another thing and quite high priority.