A chain is only as strong as its weakest link and a protected cycle network is only good until it encounters an unprotected gap.

This is the fourth article in a five-part series entitled Building Hamilton's Protected Cycling Network.

Today's article is Part 4: Building the Network: Cannon Street. The "Yes We Cannon" petition calls for bike lanes from "Kenilworth to Queen Streets." Currently Cannon Street has a protected bike lane that ends at Sherman.

On May 6, 2015, at the meeting of the Hamilton Cycling Committee, Hamilton city staff disclosed their plans for the Cannon Street cycling infrastructure extension from Sherman to Kenilworth. These plans are for unprotected bike lanes where nothing more than paint is separating cyclists from multi-tonne motor vehicles going 50-70 km/hr.

As we saw in part 1 of this series, unprotected bike lanes exclude 92 percent of the population and systematically discriminate against women. This is in profound contradiction to the "Yes We Cannon" petition's request for "accommodation for all road users."

Is there some good reason for this failure to provide protected bike lanes? Will the sky fall and the city grind to a halt by reallocating this road space for cyclists? Not so much.

After last February's snowstorm, city staff performed an unintentional experiment demonstrating exactly what happens when lanes on Cannon Street between Sherman and Kenilworth are taken out of service. 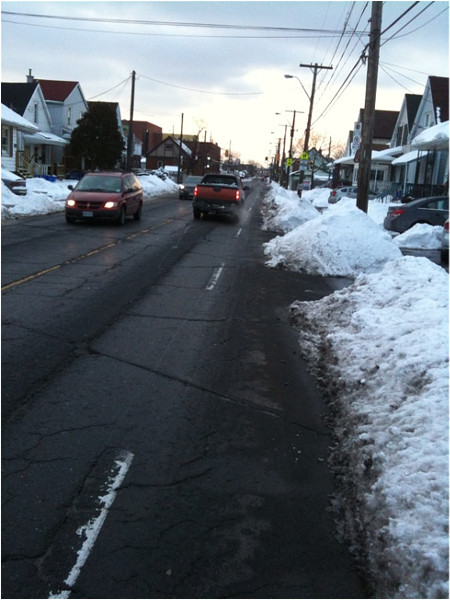 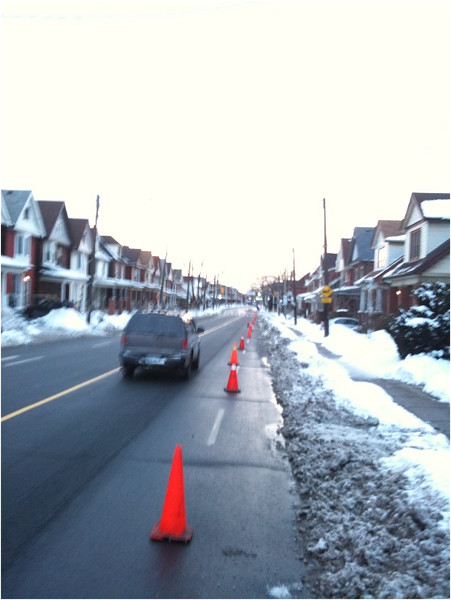 These lanes were out of service for over a week until the City finally cleared them. As someone who rides to and from work every day on Cannon Street during AM and PM peak hours, I can attest that what we see in the photographs is absolutely typical for the entire time.

The next example is for those who say "But Cannon has driveways!" or "cycle infrastructure only works because Dutch cities have high density!" Here is an example of a fairly low density suburb in Vught: two lanes for cars and the same amount of space for walking and cycling. Just the amount of space we have on Cannon Street.

The final example is a video of an even less dense area. We see the same amount of road space as is used by a four-lane car road. But cars get two lanes with the rest being a complete street.

The important point is that this could be Cannon Street if two of the existing lanes were converted for the use of people, not cars.

Cannon is, of course, a lot less rural. But I am really trying to kill the false notion that Dutch infrastructure only works because of some mythical high density.

The Dutch children in this video have high quality cycling infrastructure so they cycle to school.

Creating a Gap in the Transportation System

Another important consideration is that Cannon Street connects to the car-free Pipeline Trail just beyond Kenilworth.

If the Cannon extension is not protected, an unprotected gap has been created between the Pipeline Trail and the protected Cannon lanes west of Sherman.

A chain is only as strong as its weakest link and a protected cycle network is only good until it encounters an unprotected gap. At that point it starts excluding 92 percent of the population.

not sure what to say here any different from all the other days.

I had hoped for safe bike lanes to continue all the way to the Red Hill Valley Trail, but it sounds like that's not in the cards. Simple raising of the bike lanes to sidewalk level would do the trick.

Last week or so they added chevrons to the Cannon intersections, which are great... yesterday they added green rectangles. Anybody know the story with the green rectangles? Just another reminder to drivers "holycrap there are bikes here!" or something more?

I ask because the lack of left-turn green paint on York Boulevard is a pain in my side. In general, I love the Cannon Track, but it fails a bit when it's time to leave the cannon track and the lack of connections becomes obvious. My commute suffers from the lack of good left turns when heading westbound on York Boulevard (starting with the unnecessarily 1-way Hess) and the 1-block gap between Cannon and Barton in the Victoria-street lane (and its absent counterpart on Wellington).

I too saw the chevrons on the existing protected bike lane. In my opinion, if the City is going to be throwing around white paint, the best place to do that is for stop lines on the pavement next to the stop signs at stop sign controlled minor intersections.

Right now there are a lot of car drivers that blast through the stop sign, violate the pedestrian crossing and even intrude on the bike lane. This is a very intimidating threat of traffic violence, particularly when car drivers do it at high speeds. It would be good to have a stop line to signal where car drivers are to stop and stay stopped until it is safe to make their turn. Then we need Hamilton police to enforce this…. Good luck with that…

I saw some lines bordering the chevrons appear today too... it feels like they're kind of trying things at random, which I suppose is an improvement over the usual "nothign".

I took the Cannon lanes home west this afternoon for the first time. I connected at Gage and Cannon and didn't remember where they veered to the left hand side. At the end of the day, I was impressed with the lanes. I'd like a better option to get on to Dundurn from York, but that's a struggle for another day.

the York/Dundurn intersection has hugely excess space in all turning directions that would allow for bike lanes to connect seamlessly. Instead we keep stuff like double left turn lanes on a 1-lane road and mega wide turn lanes heading south onto Dundurn and north/west onto York.

They could paint the bike lanes through this intersection in all directions tonight if they wanted too.

In the Netherlands, municipalities get lots of funding from the federal government. If applied to Canada's larger population, it would work out to $60B, or $930M for the City of Hamilton.

As a percent of GDP, total government spending is about 40% in Canada and 50% in The Netherlands. Extensive infrasructure does not come cheap.